What I Learned Upgrading to El Capitan [u]

I hate upgrading operating systems. For some, there is the excitement of something new. For me, it’s an issue of balancing my deadlines against the possibility that something important will break.

As I’ve written before, my general rule used to be to upgrade six months after a new OS was released. However, with Apple now issuing annual upgrades, that philosophy has morphed into “don’t upgrade any business-critical system until at least a .1 update is available.”

OSXDaily (osxdaily.com) put the issue of updating nicely, in terms of the decisions you need to make:

“If you’re currently running OS X Yosemite then updating to OS X EL Capitan is probably a good idea, in the same way that updating from OS X Lion to OS X Mountain Lion was a good idea and offered improvements. OS X El Captain is a revisional system update, meaning it aims to improve the OS experience rather than add on a bunch of new crazy features (though there absolutely are new features), and in that sense, El Capitan is quite effective. In testing and with other user reports, OS X El Capitan 10.11 seems to run at least as well if not better than OS X Yosemite 10.10.5, so if you’re running Yosemite it’s certainly a worthwhile update.

If the Mac is running OS X Mavericks, OS X Mountain Lion, or even Mac OS X Snow Leopard, you’ve got a tougher decision to make, mostly because you likely stayed on one of those earlier releases for a reason. Will OS X El Capitan offer a meaningful improvement over what OS X Mavericks or prior offers? Feature wise, of course it will, but sometimes new features matter less than whatever kept the user on a prior OS X version to begin with, whether it’s app compatibility, avoiding iCloud, the font and UI changes, or just operating under the popular mantra of “if it ain’t broke, don’t fix it”. Thus some of these Mac users may just want to stay put on the earlier version, assuming they know that by doing so they’re going to miss out on various new features, security updates, and compatibility with future versions of some apps.”

I definitely fall into the “wait-a-while camp.” However, in order to finish my article on the troubles associated with RAIDs and El Capitan, I needed to upgrade one of my systems to El Capitan. So, I decided to upgrade my home machine, because it would cause the least hassle if there was a major problem. 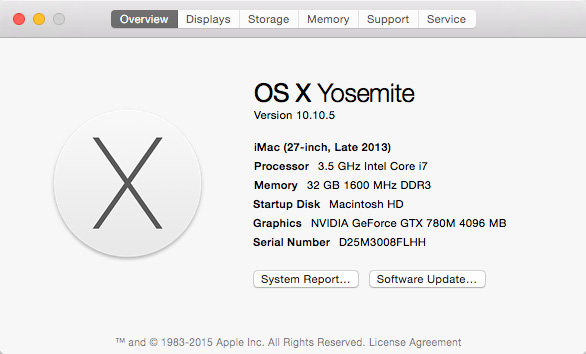 Here’s the system I’m upgrading and this is how it went.

First, I visited this website – roaringapps.com/apps – to see if any of my applications were incompatible with OS X 10.11. Some were, so I upgraded them before I upgraded the OS. 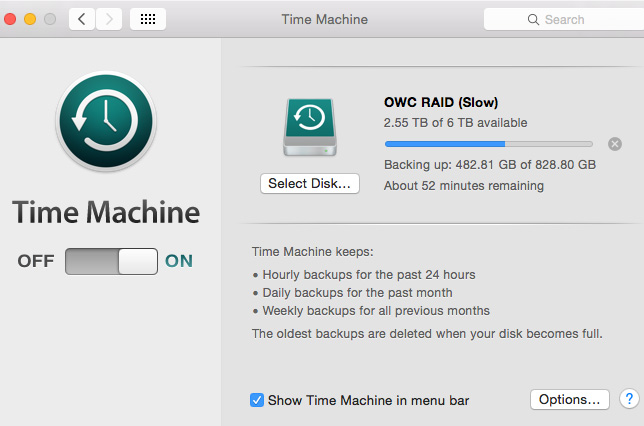 Next, I made a backup of everything using Time Machine. Now you would think I back up everything all the time. But… um, I don’t. I know, I know. I should but I didn’t. Until today.

I used Time Machine to back-up my entire boot drive. It took about two hours, which is a waste of time if the El Capitan upgrade goes smoothly; but by the time I knew whether the upgrade worked or not, it would be too late to make a backup.

Some sites advise creating a dual-boot system, where OS X Yosemite is on one partition and El Capitan is on the other.

NOTE: Here’s an article that explains how to create a dual-boot. This process changes once you get to El Capitan, due to changes in Disk Utility.

The problem with dual boot systems for people like me who are on a Fusion drive, is that the SSD built into Fusion only works with one partition. If I were upgrading the day a new OS came out, I would always created a dual-boot system.

However, in this case, I decided the potential drop in performance outweighed creating a dual-boot system. So, I skipped this step. 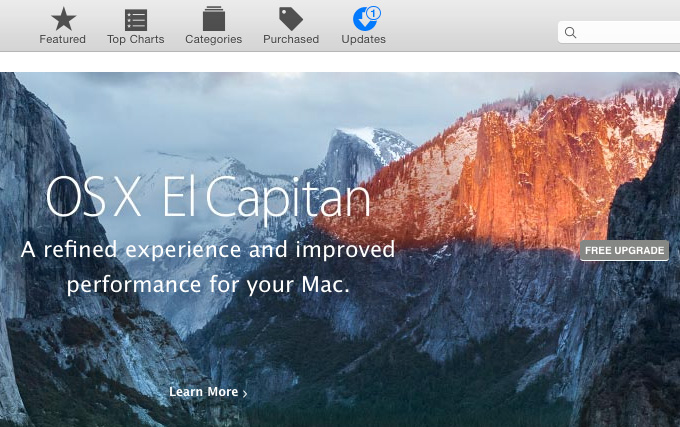 Now that my backup is complete, its time to upgrade. The process is easy. Open the Mac App Store and click the Updates button at the top.

Then click the Free Upgrade button in the OS X El Capitan graphic.

NOTE: Before I started, though, I unmounted and shut down all my external drives. No sense taking any extra risks. 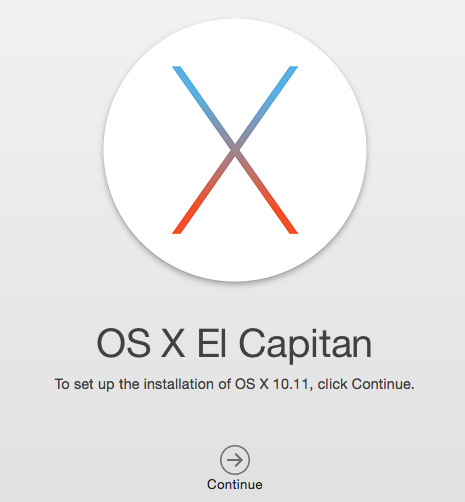 After the download was complete, Apple gave me one more chance to change my mind. I clicked Continue. 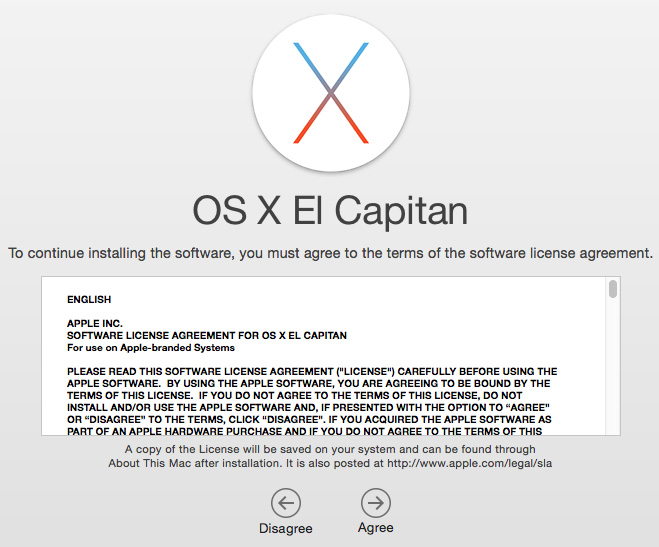 Next, I needed to agree to the standard end user license agreement (EULA). 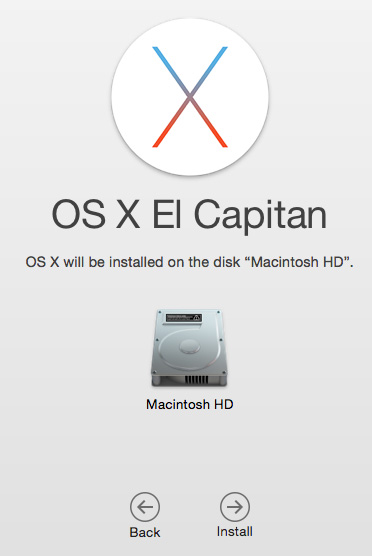 Finally, if I had more than one hard drive mounted to my system, I needed to specify where the new OS was to be installed. In my case, I was upgrading my boot disk. 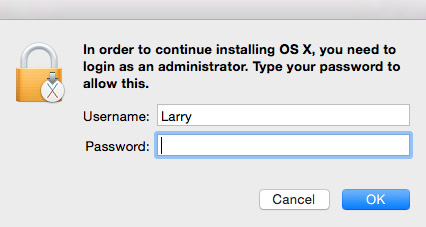 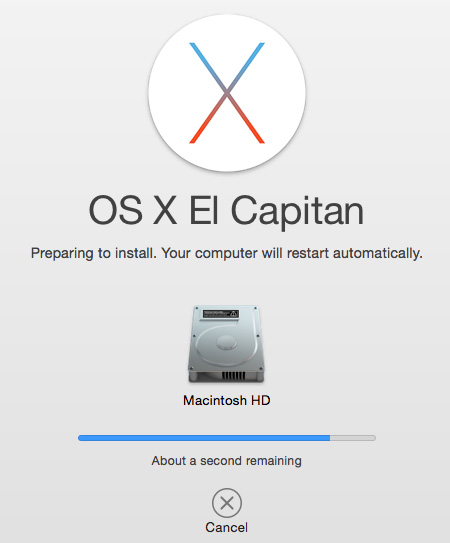 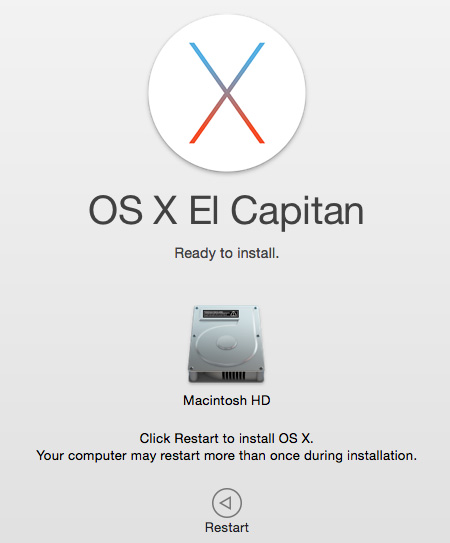 At this point, Apple takes  over the upgrade process. For me, from download to restart into El Capitan took about 90 minutes.

After restarting, El Capitan took another 45 minutes to install.

Aside from the new San Francisco system font, El Capitan looks very, very similar to Yosemite, reinforcing Apple’s message that the main changes are under the hood. 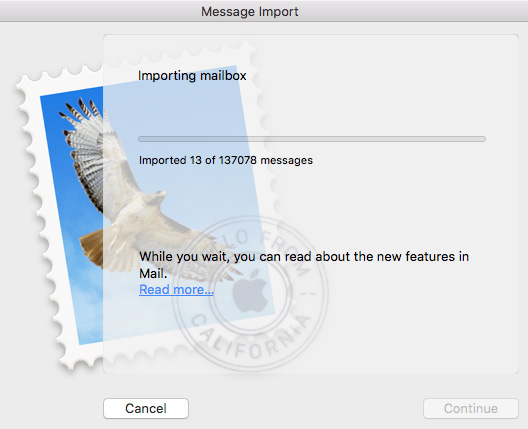 I had problems with three applications after installation:

NOTE: My Mail problems continued when I tried to access USC email via an Exchange server. Each time Mail tries to connect, it crashes.  I’ve heard about this problem from others and will work on resolving it over the next few days. Fortunately, my normal email avoids Exchange and connects directly with my website.

Also, Disk Utility totally changed, which could cause problems if you are using a software RAID created in an earlier version of Disk Utility. Read this article to learn if you are affected. 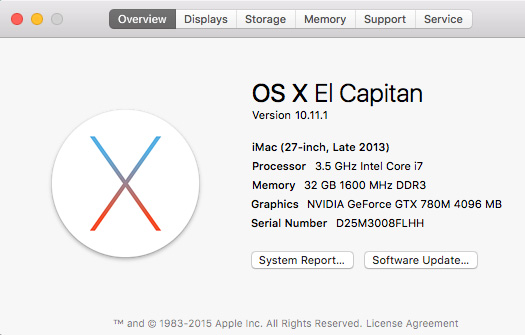 The decision to upgrade the OS should never be fast or automatic, unless you can afford to have the upgraded computer go down for a while. (This is why I upgraded my home system, rather than one of my business systems.)

Keep these basic rules in mind:

I’ll still have my office hold off upgrading for a few more weeks yet. And I’ll keep you informed on what I discover, in case anything goes wrong.

An, as always, let me know your opinion.

40 Responses to What I Learned Upgrading to El Capitan [u]