[ UPDATE 12/1/2020: James Mathers, cinematographer and co-founder of the Digital Cinema Society, provided a collection of free LUTs that work with most NLEs. You’ll find the link at the end of this article.]

Separate from, but essential to, high dynamic range (HDR) media are raw and log files, along with LUTs. In this tutorial, I want to explain what these are.

NOTE: Here’s an article I wrote that explains the basics of high dynamic range media.

A raw file is a direct capture of the sensor data generated by the camera. Technopedia describes it as: “the crude output of a video or still camera recording. It is the unprocessed data from a camera’s image sensor. Most photographers prefer shooting raw footage due to the high quality of images that the camera sensor could possibly produce.” (Technopedia)

“Raw image files are sometimes described as ‘digital negatives’; though they are not negative images, they fulfill the same role as negatives in film photography: that is, the negative is not directly usable as an image, but has all of the information needed to create an image.” (Wikipedia) 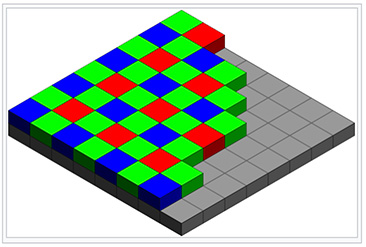 At the heart of raw data is the Bayer filter, which was invented by Bryce Bayer in 1976. “A Bayer filter mosaic is a color filter array (CFA) for arranging RGB color filters on a square grid of photosensors. Its particular arrangement of color filters is used in most single-chip digital image sensors used in digital cameras, camcorders, and scanners to create a color image. The filter pattern is 50% green, 25% red and 25% blue…. The raw output of Bayer-filter cameras is referred to as a Bayer pattern image.” (Wikipedia)

Here’s an example of the stages of a raw image, provided by Wikipedia.

Here’s an illustration of this process from Arri. The source image is captured in gray-scale, then converted to RGB pixels in the camera using a Bayer pattern.

What makes this sensor data so interesting is that the light coming in from the lens is captured as luma (gray-scale) values. Then, “Since each pixel is filtered to record only one of three colors, the data from each pixel cannot fully specify each of the red, green, and blue values on its own. To obtain a full-color image, various demosaicing algorithms can be used to interpolate a set of complete red, green, and blue values for each pixel. These algorithms make use of the surrounding pixels of the corresponding colors to estimate the values for a particular pixel.” (Wikipedia)

Since each four-pixel block only has one red, one blue and two green sensors, part of the challenge of “de-Bayering” is figuring out the best way to estimate what the colors of the missing pixels are. This means that we are creating three new blue pixel values, three new red pixel values and two new green pixel values for each block of four pixels. As you can imagine this process is both processor-intensive and time-consuming.

Also, there’s no perfect way to create these estimated pixels, and, in fact, there are differing ideas on how best to create a Bayer filter, which is why there are a variety of de-Bayering algorithms in use today, each delivering slightly different results.

It is important to note that raw data can only be captured from the camera sensor. Full RGB pixels can not be converted into raw files.

I should also mention that raw files are really large, because they contain a lot of data in a, generally, uncompressed state.

Like other raw formats, ProRes RAW captures the sensor data using a Bayer filter. It’s what happens next that’s different.

NOTE: “Raw” is not an acronym, it simply describes an image state, the same way we would say “black and white,” not “BLACK AND WHITE” or “COLOR.” A “raw” file is spelled lower case. ProRes RAW, on the other hand, is the name of a product where the word RAW is all-caps.

In a traditional Bayer filter, the sensor data is processed in camera to create the full RGB image.

What Apple decided to do is defer the processing until the raw file is loaded into an NLE. This means that the sensor data is not interpreted until you are ready to edit. There are two big benefits to this approach and one big limitation.

The first big benefit is that the ProRes RAW file is much smaller because all the individual pixels have not yet been generated. The second benefit is that waiting to de-Bayer the file means that you can apply better algorithms and faster processors to the task.

In all cases, the reason we work with raw files is that we want to get as close to the camera source data as possible to give us the greatest flexibility in how those images will ultimately look.

Raw files define how the image is captured by the sensor, then converted into pixels. What’s missing in this description, though, is brightness. Most raw files capture data with a wide dynamic range; 10 to 14 stops.

The problem is that this dynamic range exceeds the display capability of a Rec. 709 image. 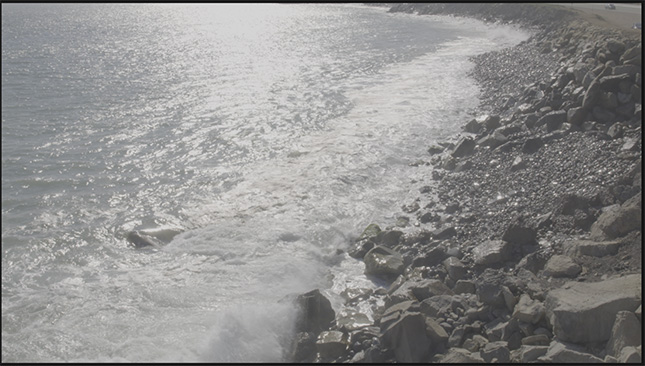 Here’s an example. This image was captured using vlog, a high dynamic range format, which preserves the highlight detail in the file, but when you look at it on the display, it looks, um, awful.

What a camera does to preserve highlights is to record them in a logarithmic or “log” format. In this example, a typical Rec. 709 image records all gray-scale values as a linear range from black to white. This works perfectly fine for HD images, but limits what we can do with excessive highlights. Most of the time, when highlights are too bright, they look “blown-out” or over-exposed. In any case, all the detail in at the highlights is lost.

To fix this, a log file records the highlights so that when the file is adjusted during the final color grade, we can either extend those highlights into the brighter ranges of HDR (the right image) or pull them down to fit into a Rec. 709 image.

It is important to note that log files can be used in any project – SD, HD, HDR – which is why they are increasingly popular for any project requiring a non-standard “look,” albeit at the expense of a color grade.

Tone-mapping. Converting HDR media to “fit” in a Rec. 709 project.

This brings us to LUTs (Look-Up Tables). These, I have discovered, are magical. A LUT converts the pixel values in an image; both color and gray-scale. They are most often used to convert images from sensor or log values into something that looks more pleasing to the eye.

The reason I consider them “magical,” is:

There are two types of LUTs:

Camera LUTs mirror the way a camera converts light into a log format. The LUT re-converts that log format into something that closely resembles the original image.

Design LUTs convert an image into a specific look, for example: romance, horror, historical… you get the idea. 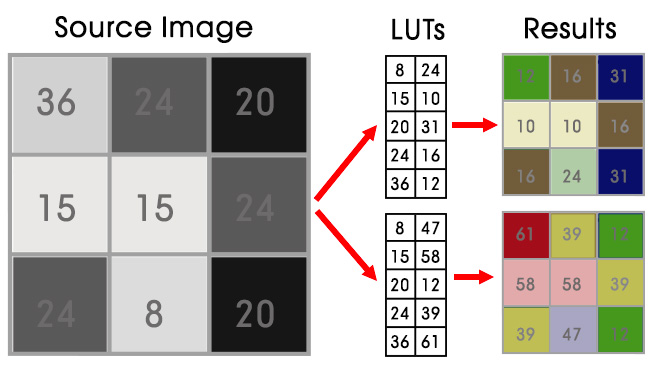 Yet, in both cases, the source image is not changed! The LUT is simply “remapping” the original pixel values to create new color and gray-scale values.

Here’s an example. The image on the left is the original log image in a Rec. 709 project. The middle image has a Panasonic camera LUT applied. The right image has the Folger design LUT from RocketStock applied. The same source image, totally different looks. And, changing LUTs does not require rendering.

The nice thing about using LUTs is that there is no “right” or “wrong.” As long as your video stays within technical specs, any look you like is the right look. And any look you don’t, isn’t.

NOTE: There are different formats of LUT files. DaVinci Resolve, Adobe Premiere and Apple Final Cut Pro X all use the .CUBE format.

The good news is that all these different formats can be used in any video project – SD, HD, HDR. How we edit these files is the same. The only difference is in the size and quality of the image.

Raw files give us the most control over the color and gray-scale values in our image, but they create massively large files and require significant time spent color grading. Log files allow us to retain highlight detail. And LUTs allow us to quickly convert an image or clip from one look to another.

However, using these files requires that we shift our thinking from “which format creates the smallest files,” to “which format provides the greatest flexibility in crafting the image that best tells my story.”

As we move into the new worlds of HDR, raw and log files, we are also moving into an environment which requires massive amounts of storage, much faster storage bandwidth and thinking about color grading and media management before we start our next project.

As always, there are trade-offs.

Here’s an article explaining The Basics of HDR Media.

Here’s an article that explains how to create custom LUTs for Final Cut Pro X, Premiere, and/or Resolve.

PremiumBeat: A Brief History of RAW footage in Video Production.

An excellent white paper from Apple on ProRes RAW.

Bounce Color, founded by James Mathers, is offering 20 free LUTs for converting Log footage to Rec.709 so they can be used with any camera.  Crafted by a team of filmmakers for professional and beginner filmmakers, these are compatible with Premiere Pro, Final Cut Pro, DaVinci Resolve and more.
https://www.bouncecolor.com/blogs/news/free-luts/

The easiest way to obtain Blackmagic Design camera LUTs is to install the free version of Davinci Resolve. These LUTs can be used in Premiere, Final Cut, Resolve and others. You’ll find them in:

mLUTs is a utility that makes applying custom LUTs easy. It supports Avid, Premiere, Final Cut, Resolve and others. The utility is free and available from MotionVFX.com: https://www.motionvfx.com/store,mlut-plugin,p1949.html

11 Responses to Understanding Raw, Log and LUT Files [u]