NOTE: You can also use the process described below for transferring Premiere projects to transfer FCP 7 projects to FCP X.

But, before explaining How? I need to answer two other important questions: Why? and When?

There is nothing inherently wrong or “bad” about starting an edit on one system, then finishing it on another. However, this transfer needs to be made during the rough cut portion of your editing. (As you’ll see in the “When” section, waiting until later in the edit runs the risk of losing too much when you transfer your project.)

Transferring should be a one-time-only event. If you want two editors working on the same project – one in the morning and one in the afternoon – they should both use the same software.

Transferring works best when one system is used for logging and creating a rough cut, then delivered to a second editor for trimming, clean-up and effects.

NOTE: This string-out process works equally well if you have one editor selecting clips or a team of multiple editors. The key is that the files move from one system to another early in the editorial process.

This transfer process can also work well if you have an editor in the field quickly creating a rough cut, then delivering both the cut and the media back to the office either via the web or shipping a hard disk.

When it comes to editing, Premiere and Final Cut both achieve similar results, but they don’t do it the same way. For this reason, transferring projects can either be blissfully simple, or frustratingly difficult depending upon when you make the transfer because not everything can be transferred.

In general, the following elements should transfer with few to no problems:

For best results, transfers – in either direction – should be done anytime during an edit before effects are added. This is because most effects won’t transfer between systems, including:

Also, if you are using a proxy workflow in either application, the links from proxy to source files will not transfer.

Because of this, it makes the most sense to transfer from one system to another at some point during the initial rough cut.

You first need to export an XML file of the project you want to transfer. This means that you need to be able to open the project file in the application that created it and that all media is linked.

NOTE: It is strongly recommended that the media files are online and have identical file paths (drive names, folder structures and file names) to avoid problems with relinking media. If working between two Macs, you may need to consolidate media to an external drive and reconnect any unconnected media before exporting XML.

You will need one of two utilities, depending upon the direction you are going.

NOTE: XML conversion is actually a very complex process. Read the online documentation from Intelligent Assistance for the appropriate utility before transferring complex projects to better understand the limitations of this procedure.

HOW IT WORKS: PREMIERE TO FCP X

Here’s my sample project in Premiere. 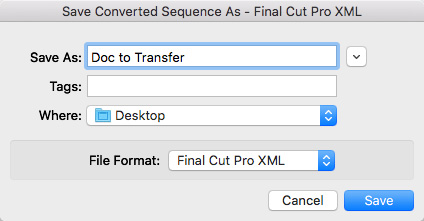 Give the XML file a name and location.

This error dialog always appears. This text file will tell you what did, and didn’t, make the transfer. This file will be stored in the same location as the XML file and named: “FCP Translation Results [today’s date].” It is a good practice to read this before importing your project into Final Cut Pro X. 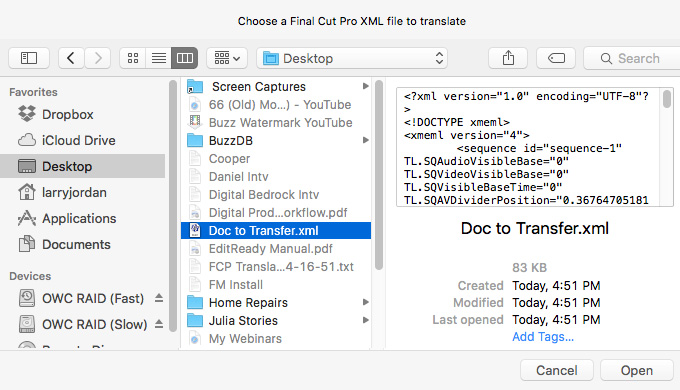 Open 7toX and either open it from this dialog, or simply drag-and-drop the XML file on the icon for the application itself.

7toX opens and processes your XML file. This process is quick, but the actual speed of the conversion depends upon the number of clips and the complexity of the source project. 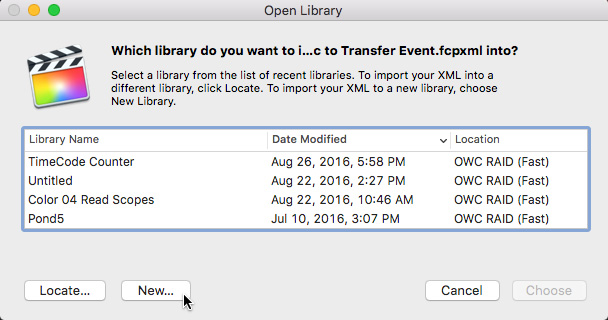 In general, I create a new library for these transfers. However, if editors in the field are creating select lists, you can easily add these transfer to an existing library by selecting it from this Library list.

If you are creating a new Library, give it a name and location.

At which point, clean up what didn’t transfer successfully, then start editing.

HOW IT WORKS: FCP X TO PREMIERE

The process is similar when moving from Final Cut Pro X to Premiere.

First, open the Library and select the Project or Event you want to transfer.

NOTE: Compound clips are translated as nested sequences. However, the destination app importing Final Cut Pro 7 XML may not necessarily support nested sequences, such as Adobe Audition and After Effects. You can avoid this by breaking apart compound clips in a project into their original items. 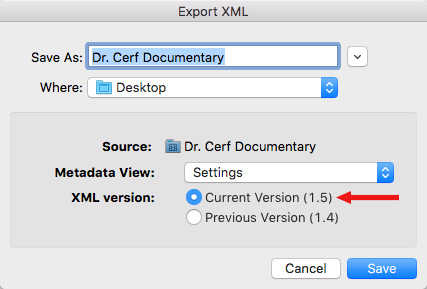 Give the XML file a name and location. If you are using FCP X 10.1 or later, always export using XML version 1.5 or later. Click Save. 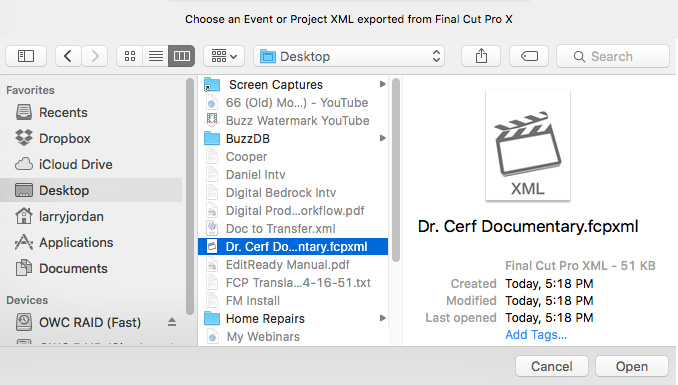 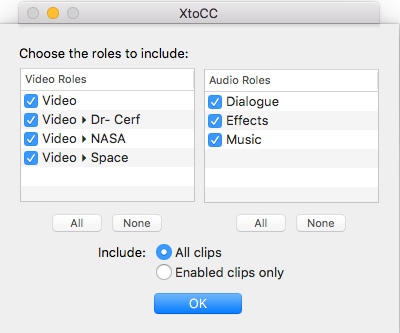 This dialog allows you to determine which roles get exported. In general, I recommend exporting everything, then making adjustments once you import the project into Premiere. 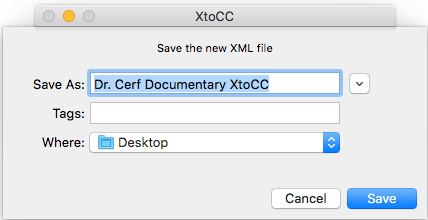 Specify where you want the converted XML file stored.

NOTE: The speed of conversion will depend upon the size and complexity of the original project.

NOTE: When transferring projects, I tend to create a new project in Premiere. However, you can easily import a FCP X project into an existing Premiere project. It will be treated as a stand-alone sequence.

Choose File > Import and select the converted XML file. Premiere will recognize it as an XML file and handle it accordingly.

After a few seconds, the transferred project is loaded into the Project panel.

NOTE: Always review the Translation Error report, then make any adjustments to clips that need it before beginning your edit.

IF YOU ARE MOVING BETWEEN TWO COMPUTERS

If you are moving projects between two computers, you will need to send both the converted XML file AND all the related media. The XML file only contains pointers to your media.

This means that you need to think carefully about where to store media for any project you expect to move between systems before starting your edit.

There are substantial differences under the hood between Premiere and Final Cut. The programmers of these utilities have told me this is some of the most complex code they’ve ever written. Because of these differences, this transfer process works well, but doesn’t convert everything. It is best used early in the editorial process, before titles and effects get added.

The other key point to keep in mind is that you must create an XML file of the project you want to transfer. Only Adobe can read a Premiere project file and only Apple can read a Final Cut project file. This means that you need to have access to Premiere or Final Cut to create the XML file in the first place.

Finally, for best results, be sure to read the documentation from Intelligent Assistance before beginning this process to minimize problems.