I wonder if you have any tutorials on the pros and cons of editing via NAS vs DAS vs the internal drive of your computer?

This is a great question, especially since I’ve been thinking about networking all week. This can get REALLY geeky, so I’ll just keep this to an overview.

NOTE: There is another form of network storage, called a SAN (Storage Area Network). A NAS is a single storage device that serves files over Ethernet and is relatively inexpensive and easy to set up, while a SAN is a tightly coupled network of multiple devices that work with block-based data and is more expensive and complex to set up and manage. SANs typically use Fibre Channel connectivity, while a NAS uses Ethernet. SANs tend to be used more at the enterprise level.

Let’s take a closer look at all the options.

Internal storage in current Macs uses an NVMe SSD. These are the fastest SSDs currently available, reading and writing data around 2,500 MB/second! And because they are SSDs, they are much less likely to break due to rough handling.

There are two big problems with using internal SSDs as your primary storage:

Still, if your projects are small, you need to be quickly portable or performance is essential, storing your project on an internal SSD in a modern computer is an excellent choice.

Older Macs, that don’t have Fusion drives, use a PCIe SSD. These share similar performance characteristics to an NVMe SSD, but with a slower transfer speed. A PCIe SSD only transfers data around 400 MB/sec.

While still fast enough for many edits, it isn’t the blinding speed of the much more recent NVMe SSD. As well, for most Macs, these internal SSDs either can’t be upgraded or can only be upgraded with difficulty.

The decision on whether your Mac uses an NVMe or PCIe SSD was made by Apple at the time your system was manufactured and can’t be changed later. All modern systems use NVMe SSDs.

A Fusion drive combines the speed of a PCIe SSD with the increased, and lower-cost, of a spinning hard drive. Capacities of Fusion drives are greater than SSDs, but not by a lot.

PCIe SSDs read and write data around 400 MB/sec, while the spinning hard drive transfers data around 150 MB/sec. So, in most cases, an internal Fusion drive will be slower than external storage, though faster than most network storage. The other reason for the speed difference is that the SSD is generally around 25 GB in size, with the rest of the storage being HDD. This means that, most of the time, the SSD is accelerating the operating system and applications, without boosting media transfer speeds much, if at all.

Fusion drives also suffer from the same problems as internal SSDs: limited capacity that can’t be upgraded after purchase. Worse, the fuller an internal HDD gets, the slower a computer will operate. (While that’s true of all spinning media devices, it is especially true for the internal boot disk.) There are many, MANY activities running in the background of your Mac, each of which needs hard disk access. As storage fills up, background activities will also slow down.

My recommendation is that you use the internal drive for the operating system, applications and the work files generated by your software. Store all media and projects external to your computer. This provides the fastest performance while not filling your internal hard disk with excessive media data files. 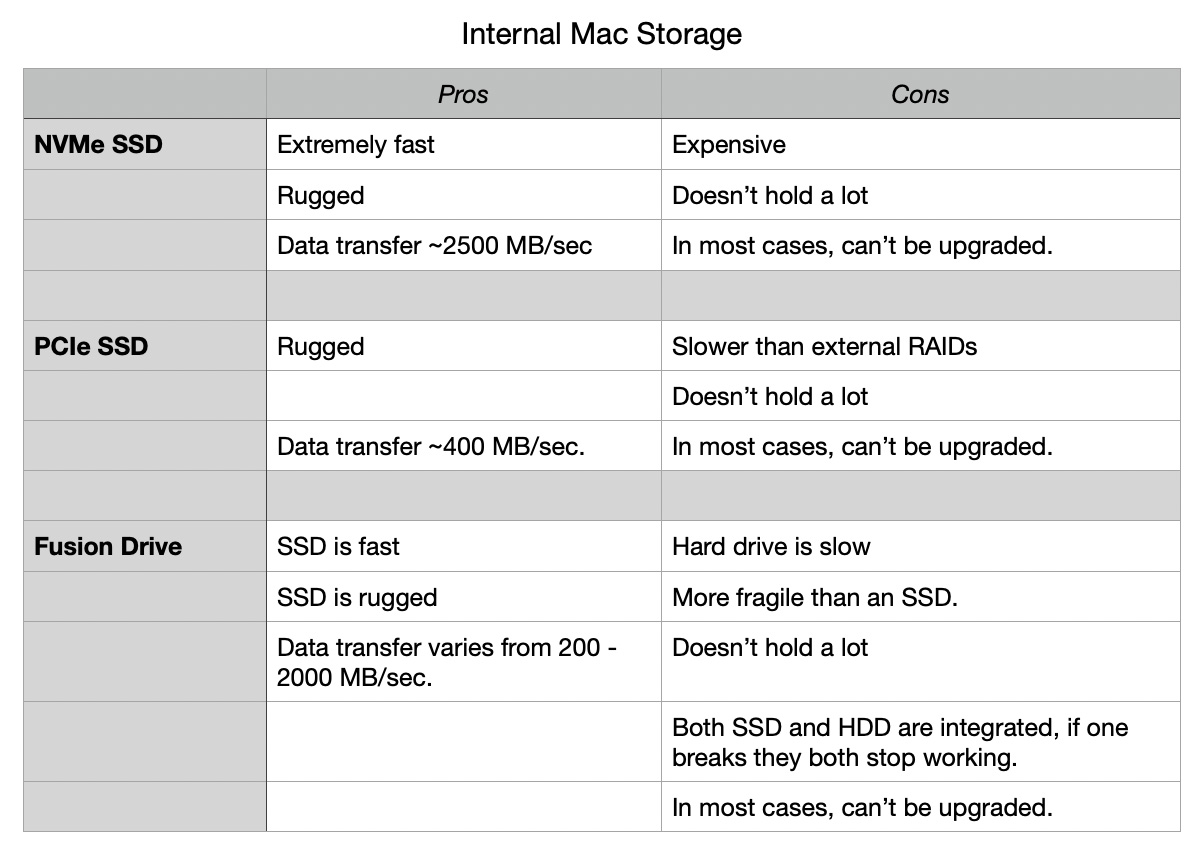 This can get really complicated REALLY quickly, because there are so many options and “yes, but’s…” Still, here’s a high-level look.

There are two gating factors affecting the performance of direct-attached storage:

There are six different variations of USB, each with its own maximum speed limit. In general, don’t use any version of USB for media editing when you care about performance; except for USB 4, which should start shipping in early 2021.

NOTE: I would be more specific if the USB-IF committee that controls USB didn’t rename every USB variant some form of USB Gen. 2, which is just stupid. For the technically savvy, USB Gen 2 2×2 is fast enough for most HD edits. Here’s my screed about how screwed up USB naming has become.

Thunderbolt is specifically designed for large media files and it is faster than any flavor of USB except USB 4. (Thunderbolt is integrated into the USB 4 spec.) Thunderbolt devices cost more, but if you want performance, Thunderbolt is the only way to go. 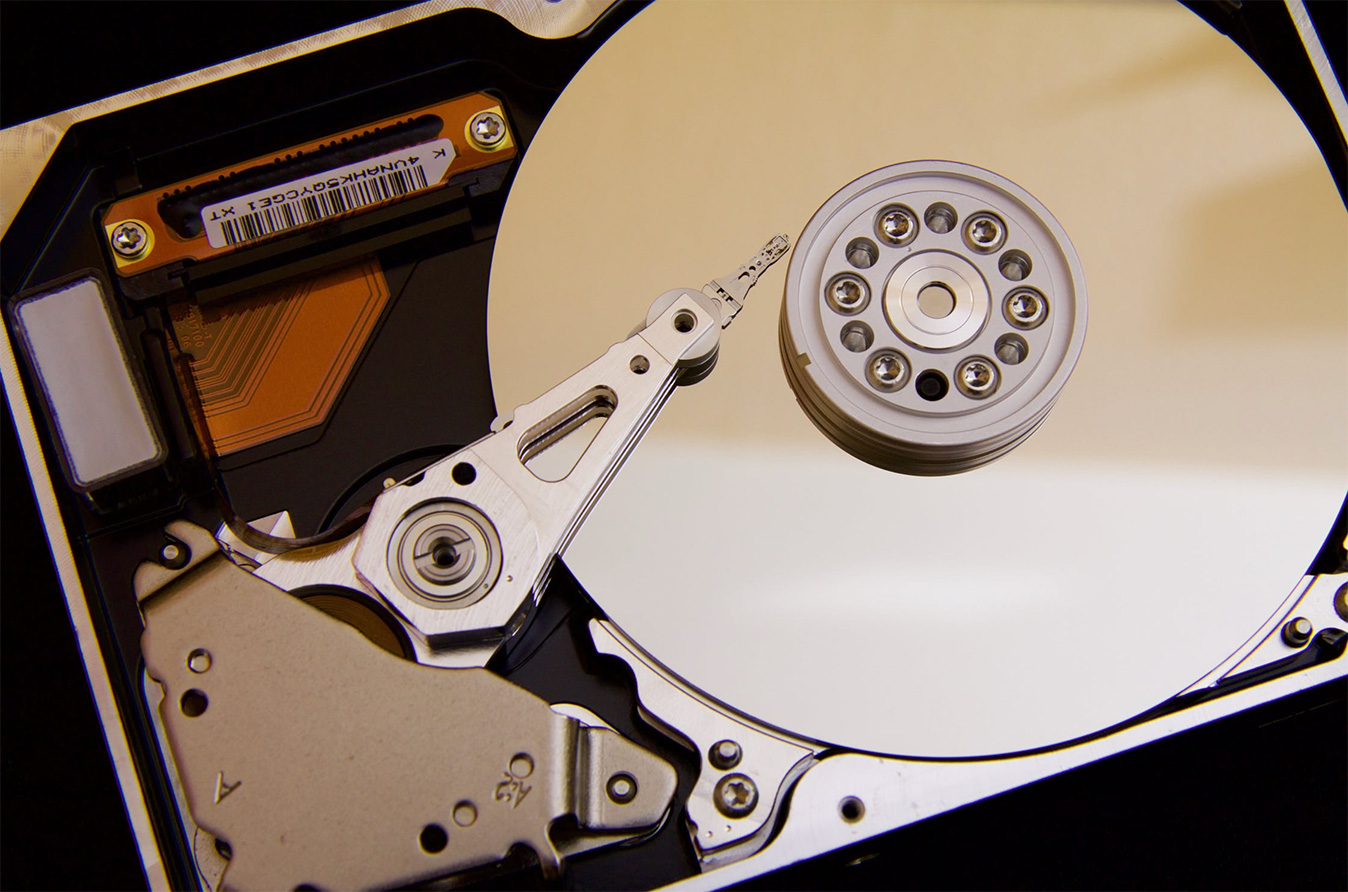 (The internals of an HDD. Image courtesy of Pexels.com.)

Once you figure out the connection protocol, there are four different types of storage to consider:

Let’s look at each of these:

Single spinning hard drive. These are cheap, hold a lot and are easy to move from place to place. But they are not fast, transferring data around 150 MB/second. They are also fragile in that if you drop them, they will break. Not recommended for 4K, HDR or multicam editing.

Single PCIe SSD. These hold much less data than a single spinning hard drive, but are much faster, transferring media around 400 MB/second. They are also more rugged and extremely portable. If you need to travel, and can work within the limited storage capacity they provide, these are an excellent choice. PCIe is an older format, newer systems use NVMe.

Single NVME SSD. These are the blazing speed demons of the storage world, transferring data about 2,500 MB/second! They are rugged and extremely portable. However, they are expensive and don’t hold a lot. If your projects are small and you can afford them, these are the best option for rugged, fast storage for media editing, especially when portability is important.

NOTE: Any of these three devices should be good for editing HD media, when connected via Thunderbolt. 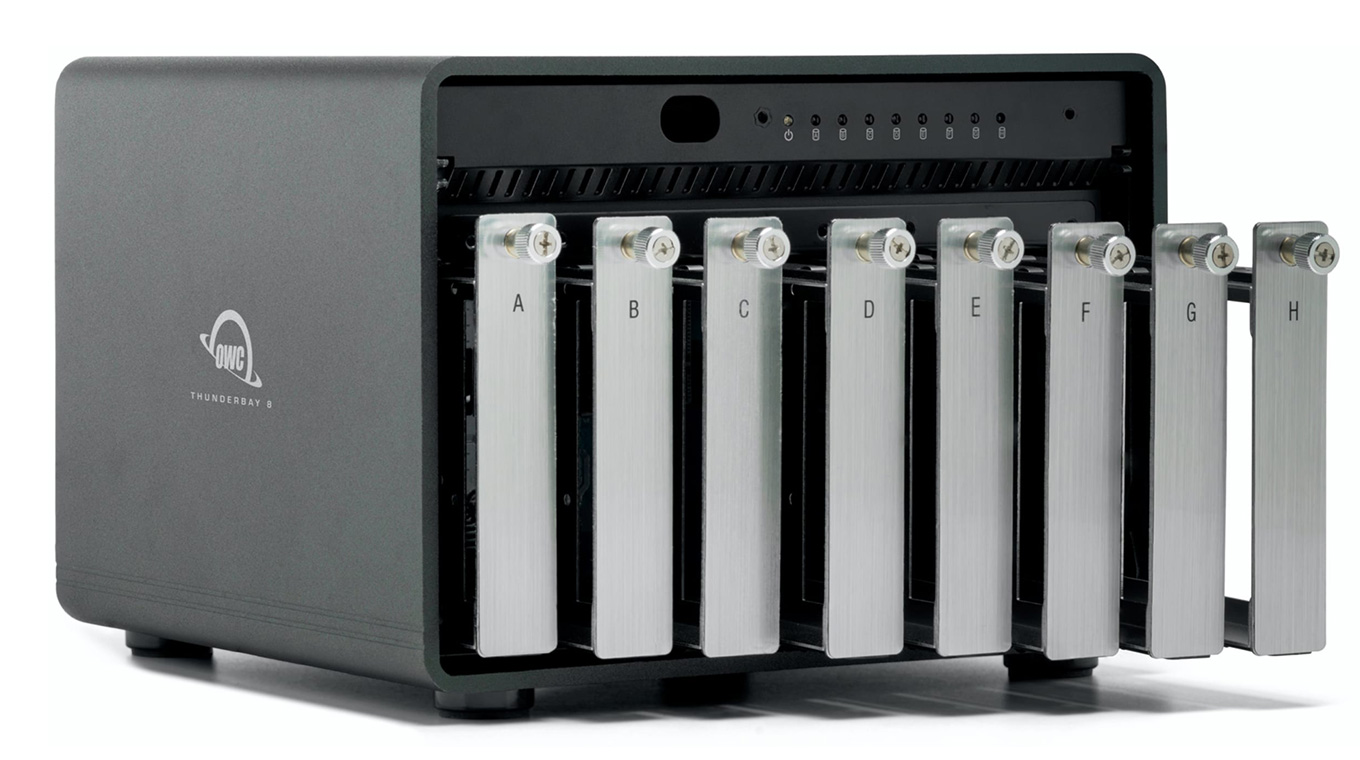 RAID (HDD). HDD RAIDs are the workhorses of media editing. They hold vast amounts of data, vary in speed from fast to really fast, and can be expanded at any time by adding larger hard drives. RAIDs require a minimum of 3 drives, though more generally, they contain 4, 5, 6, or 8 drives. (The maximum I know of holds 18 drives.)

However, RAIDs are expensive, heavy and the spinning hard disks create noise. (How much noise depends upon fan size, fan speed, the hard disks you use and the manufacturing quality of the cabinet that holds everything together.) As well, they are fragile. Drop an HDD RAID and you’ve likely broken something important.

Still, hard disk RAIDs are the best option for almost all media editing when you need solid performance and vast storage at a reasonable price.

RAID (SSDs). When you need the highest level of performance, a RAID consisting of all SSDs – especially all NVMe SSDs – sets the standard. This is the only RAID that will fully saturate the high-speed pipe of Thunderbolt 3 (or Thunderbolt 4, for that matter).

However, SSDs are expensive and NVMe SSDs are really expensive. Worse, they provide a fraction of the storage capacity of spinning media.

The good news is that SSD RAIDs are rugged, silent, light-weight, and fast. These are the best choice for HDR, large frame size projects, or those, like multicam editing, where absolute screaming performance is at the top of the list.

As a quick summary, if you need the best performance, at the lowest price, for one editor, there is nothing better than direct-attached RAID storage. Nothing else comes close. 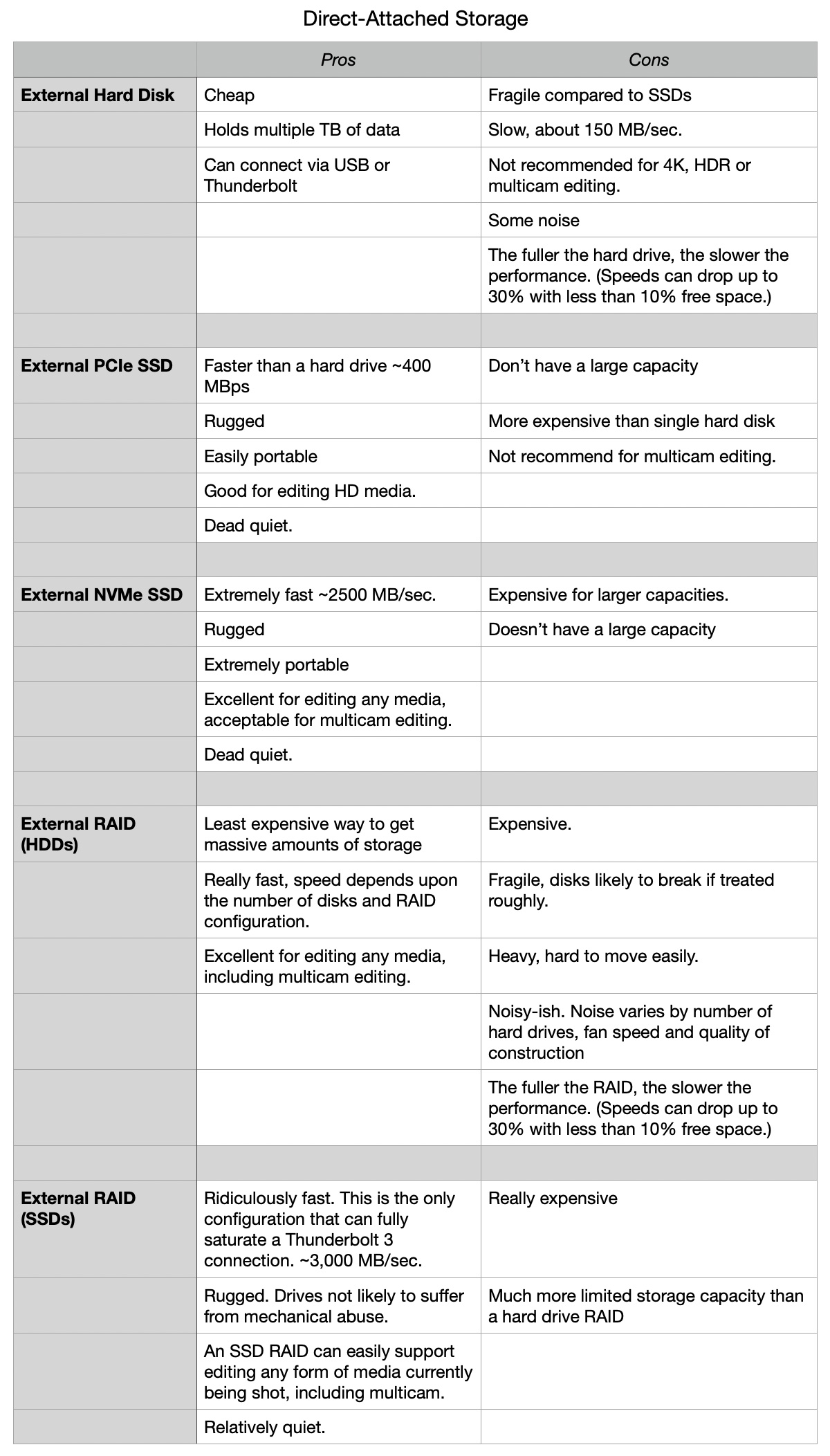 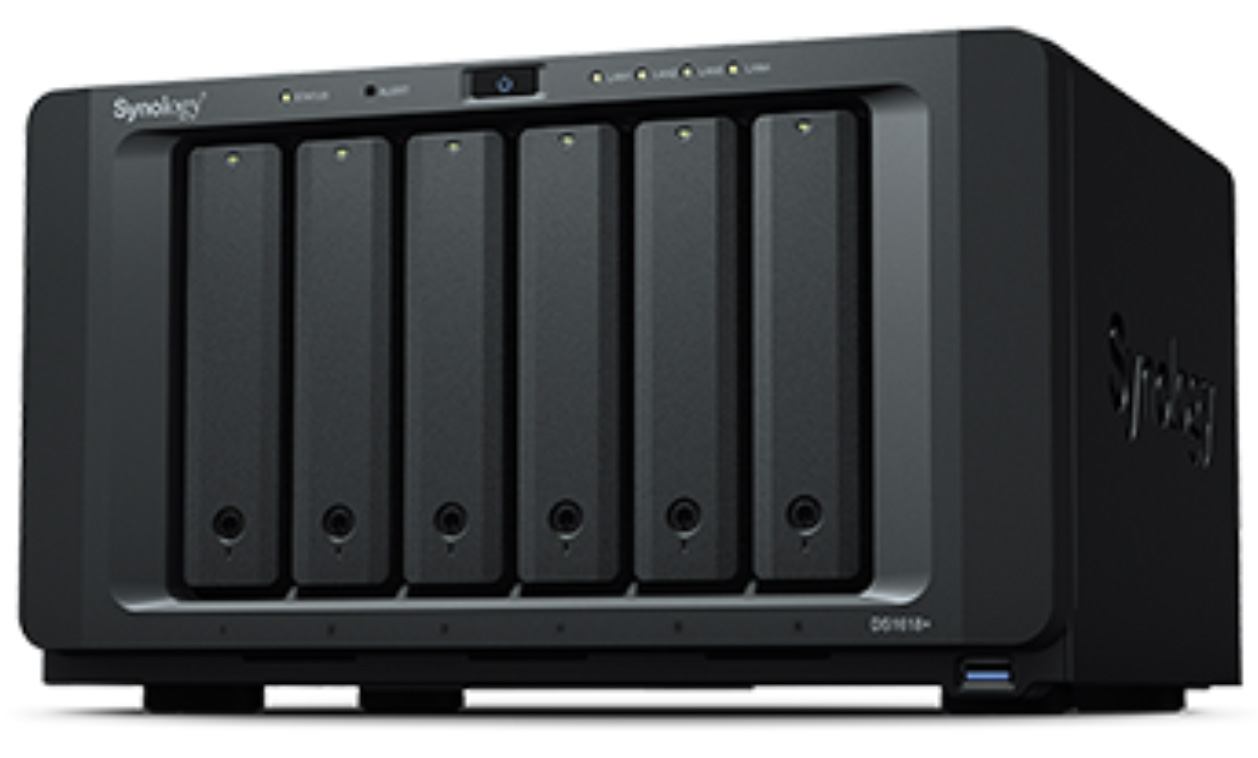 The only reason to use network-attached storage for media editing is that you need to share files or projects between editors or computers.

Network storage uses the same RAIDs as direct-attached storage, except now these devices have an extra layer of software and hardware that allows multiple editors to share the same media via the network.

I want to dwell on the speed issue. If you directly connect a five-drive RAID, filled with HDDs and configured as a RAID 5 (like I said, this stuff gets complex) you would expect a data transfer rate about 600 MB/second.

If you directly connect a five-drive RAID, filled with NVMe SSDs and configured as a RAID 4 (which is a better format for SSD drives) you would expect a data transfer rate about 2,750 MB/second –  the maximum speed Thunderbolt 3 will support. (Technically, an NVMe RAID could support up to 11 GB/second but that would need to be shared across a number of users in shared storage, no single computer could handle that much data at once.)

If you connected either RAID as a server, you’ll only get a data transfer rate of about 110 MB/second. Why? That’s the speed limit of gigabit Ethernet.

Even if you switch to 10 Gb Ethernet (which also requires new switches, cabling and hardware adapters for every computer), the maximum speed you can get through the network is about 1,000 MB/sec. That’s about 1/3 the maximum speed a Thunderbolt 3 device provides. 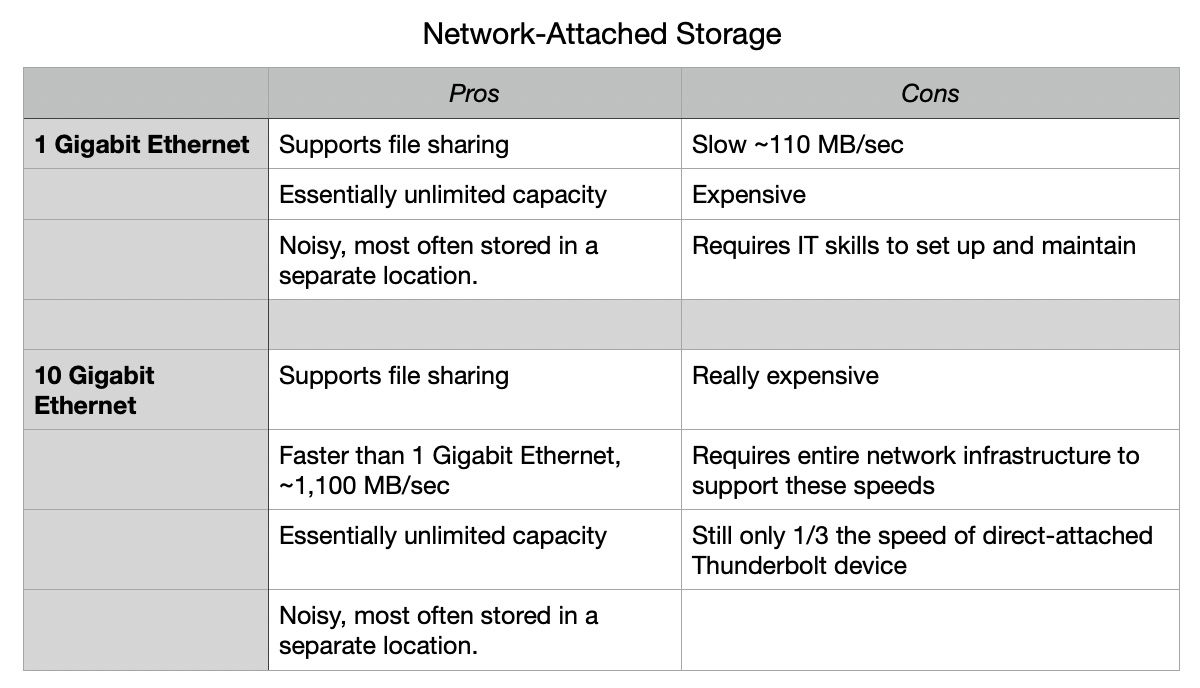 As you can tell, there are lots of options, depending upon your needs. There’s no perfect answer – there’s only the answer that works the best for you. And, as with everything in tech, every piece of hardware has benefits and tradeoffs.

As always, feel free to ask your specific questions in the comments below.