If you are a musician, know a musician, or enjoy listening to music, you need to read this review.

Shure just released a new digital stereo microphone specifically designed for iOS devices – especially the iPhone – called the MV88. They loaned me a unit for me to write this review. 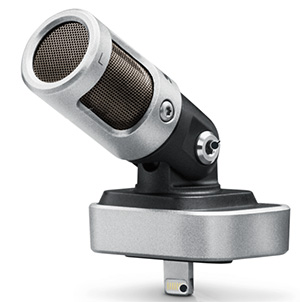 The Shure MV88 is a small, stereo, condenser microphone that attaches to iOS devices via a Lightning connector that is designed for portable recording. While it can handle interviews, its principal goal is recording music.

It requires the Shure MOTIV iOS app, which allows control of gain, EQ, and stereo width, along with 5 DPS presets to configure the mic for various recording sessions.

Shure was founded in 1925 as a radio parts wholesales and has become a global leader in audio electronics; especially in designing mics for music.

The MOTIV app is free and supports: 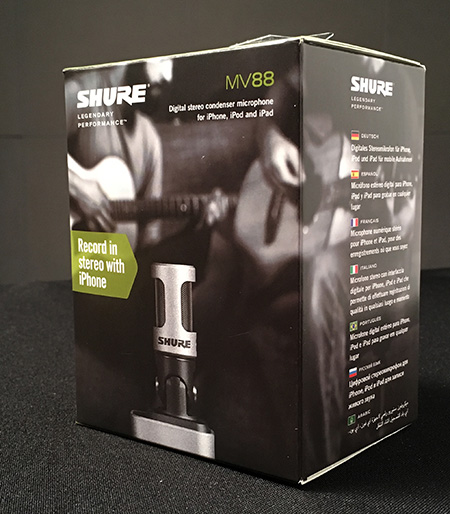 The MV88 arrives in an attractive cardboard box. 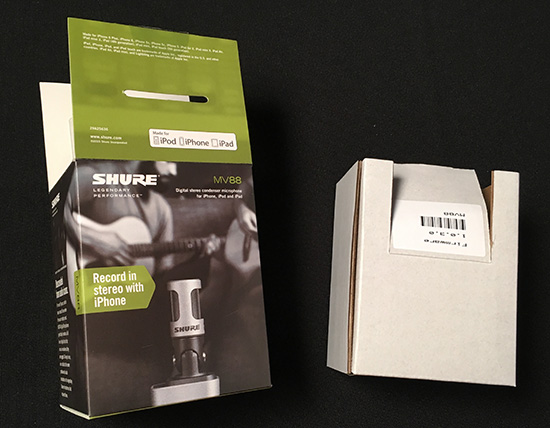 In which lives another cardboard box. Everything all nice and recyclable. 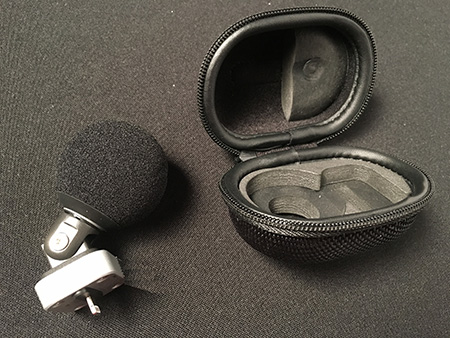 Inside is a very cute zippered carrying case – small enough to fit in your pocket. 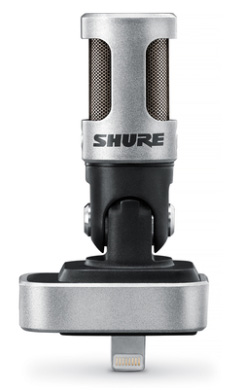 Here’s the mic itself. (Image courtesy of Shure.) 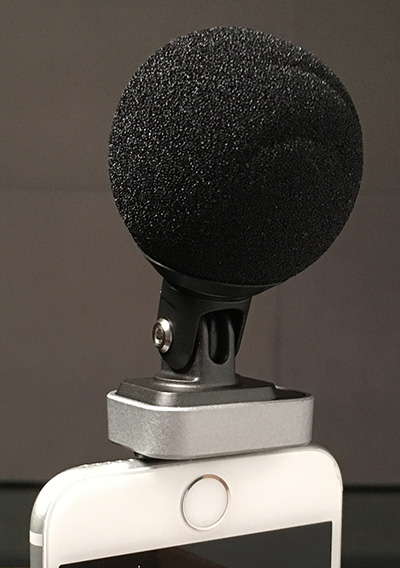 Here is it, with its included windscreen, attached to the bottom of an iPhone 6s. 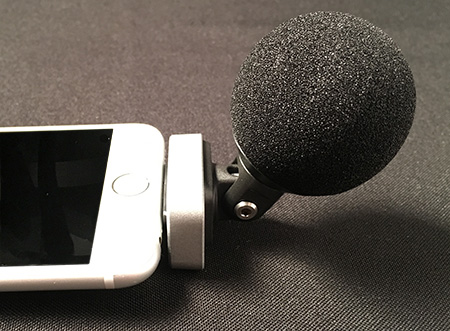 Notice that the mic attaches via the Lightning port and has an elbow, allowing you to point the mic in the same direction you are shooting with your phone.

Installing the MOTIV app, which is required to control the mic, is as easy as installing any other iOS app.

NOTE: For best results, be sure to switch your iOS device to Airplane mode with Do Not Disturb turned on. This prevents the application from being interrupted during recording. 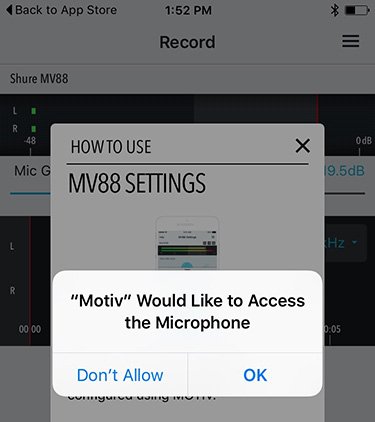 When you first run the app, it requests permission to access the microphone.

Then, the on-screen Help files allow you to quickly configure the mic. 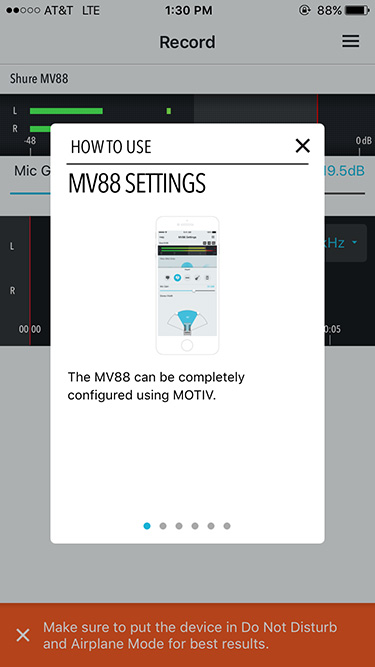 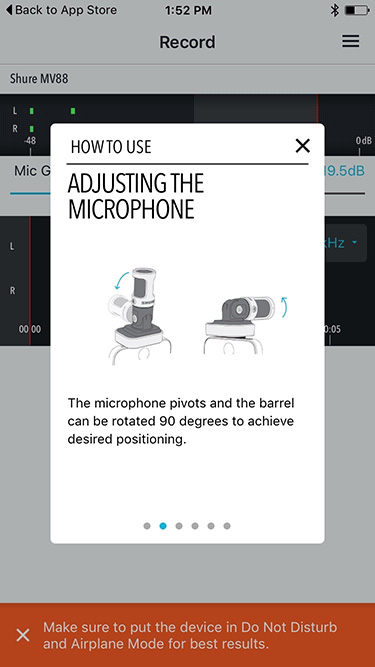 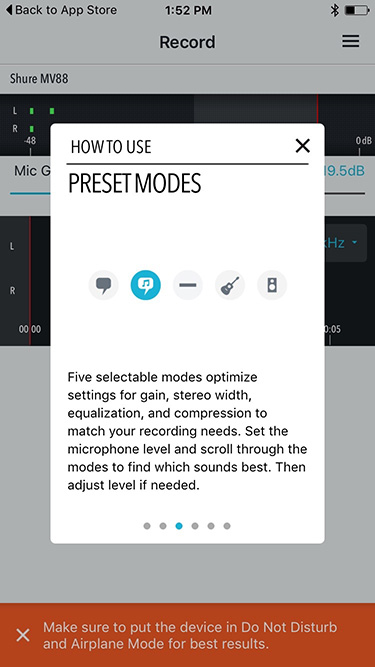 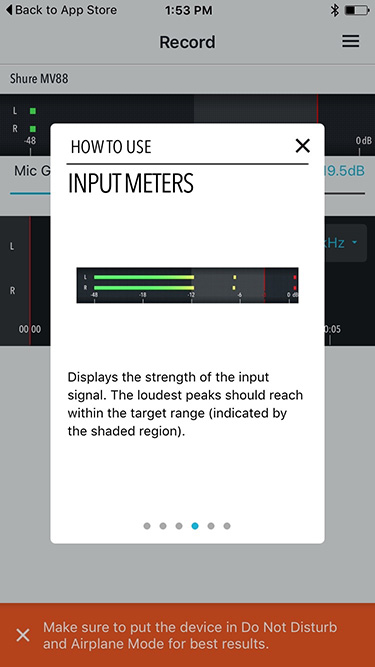 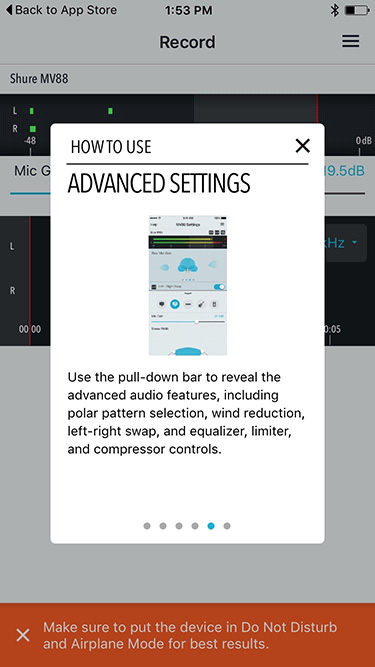 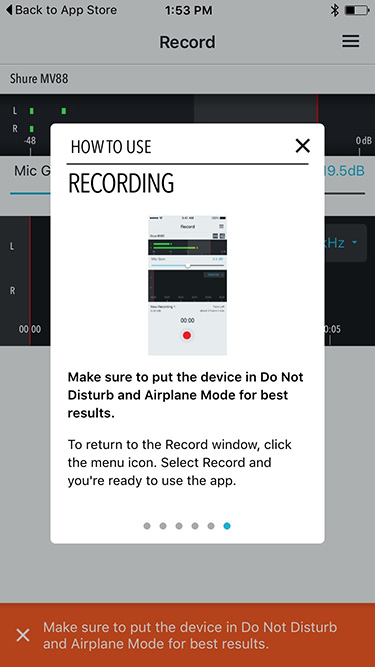 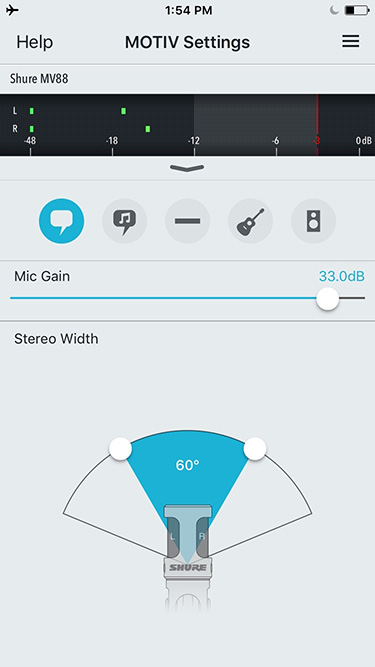 The MOTIV application allows you to configure the mic, starting with setting the Gain (recording level) of the mic. Setting the Stereo width allows you to “focus” the mic into a specific area.

For example, narrowing the focus allows you to minimize echoes, while expanding the width improves the pickup of room reverberation (think trumpets in a cathedral).

NOTE: The five icons near the top are the five DSP presets, allowing you to configure the mic for speech, singing, flat (meaning all EQ, limiter and compressor settings are turned off), acoustic music or loud music. 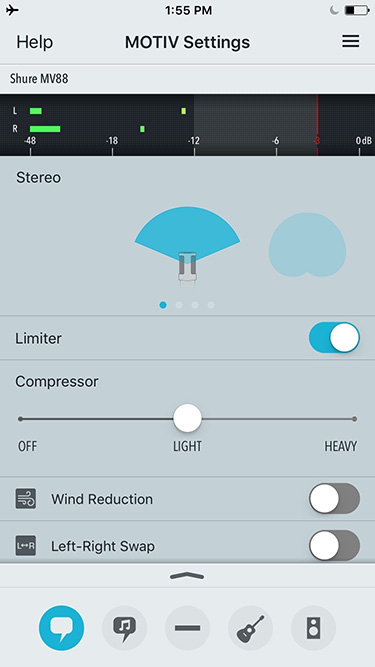 The MV88 software includes a built-in limiter and compressor, along with wind reduction (a low-cut filter) and the ability to swap the left and right channels to match what’s happening on screen.

NOTE: For better results, I generally recommend using a wind-screen, rather than the wind reduction filter, which simply cuts low frequency noise.

I strongly recommend recording with the Limiter on, while setting the Compressor to Light or, preferably, off. 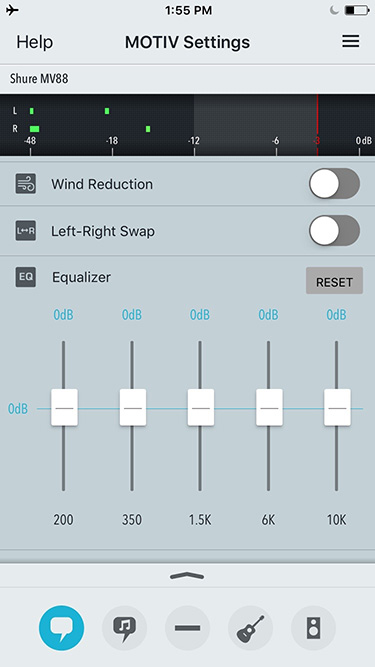 There’s a built in equalizer allowing you to boost or reduce specific frequency ranges.

NOTE: I generally recommend recording with all EQ settings set to 0 dB, then add any EQ later during mixing. It is VERY hard to hear EQ properly when you are recording in a noisy environment. 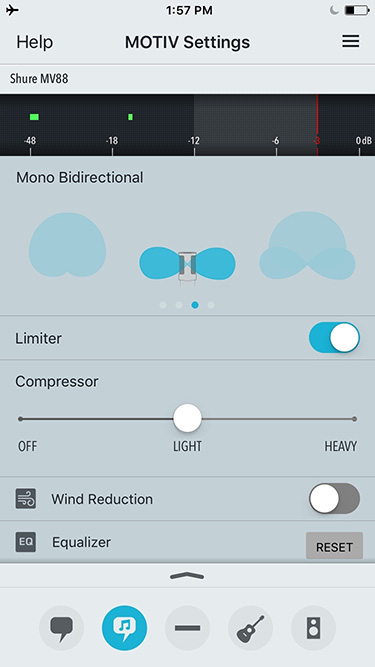 You are also able to set five different mic pickup patterns to configure the mic for specific recording environments.

Here are two links, supplied by Shure, to let you hear the musical quality of the mic. In this first example, all the audio was from the MV88 captured live, without any post processing.

This link below was one of Shure’s beta testers, an audio/multimedia guy for the Swedish national orchestra.

For myself, I went into our studio and recorded two spoken word audio samples: one using the MV88 and the other using a Shure SM-58 hand mic. You can listen to these two samples yourself by clicking this link (3.8 MB):

NOTE: My audio was recorded as a WAV file, 48 kHz sample rate. I did not apply any post-processing, except to adjust levels so the two mics would sound roughly the same. No limiters or compressors were used.

The MV88 is created by a company known for high-quality microphones. It is small, easily attaches to an iPhone and seems ideally suited to recording concerts for posting to YouTube.

It uses a mid/side microphone, which is a long-standing technology that allows shaping the stereo signal after the recording is made.

However, after working with the microphone for a bit, I have several concerns:

A CONVERSATION WITH SHURE

Because of these concerns, I reached out to Shure and spoke via phone with Soren Pedersen, the Product Specialist at Shure who lead the design of this mic. (This dialog is paraphrased from our phone conversation.)

Larry: Thanks for talking with me, Soren. Who is the market for the MV88 mic?

Soren: Content creators, with an emphasis on younger artists, that need to connect a mic to an iOS device. It has a really powerful DSP (Digital Signal Processing) engine.

Larry: How would you compare this mic to other Shure mics?

Soren: That’s difficult. Its different from other Shure mics. The MV88 has two mic capsules that share technology with the PG-Alta series of mics, which also use MOTIV technology.

Larry: How does the MV88 compare with other Shure mics?

Soren: All Shure mics are engineered by Shure and pass all Shure quality tests. The tradeoffs are in consistency between microphones. For example, in a performance setting, you may have multiple singers all using SM-58 hand mics. You want every mic to sound the same. The MV88 is designed to be used by itself, so it doesn’t need to match the sound of other MV88’s with quite the same precision that we demand of higher-end mics.

These are not drastic shifts in sound quality, more likely they will be heard as shifts in sensitivity (recording gain) between different units.

Larry: What recording environments did you design the MV88 for? For instance, when I was recording my voice, I had the crank the gain all the way up.

Soren: Music. The mic is not very sensitive to the spoken voice, as you discovered. It is designed to record live music, especially very loud live music. It is very hard to overload (to send into distortion). The DSP settings are tuned for music applications.

Larry: How do we pick the right mic pattern?

Soren: We designed this mic using a mid/side pickup. This allows you to dial in the stereo mix after the recording is complete. With this mic, you can:

Larry: How do we export large audio files? This is not easy or obvious.

Soren: Yeah. It can be done, but its pretty hidden. We have a webpage on our site that explains this. Here’s the link.

[Update] Shure adds: “File transfer off an iPhone is an Apple controlled process through iTunes. We did not hide it because there’s nothing we can do about it.”

Larry: File naming is awkward and slow. What are your plans here

Soren: I can’t announce anything at this time, however, we are aware of this and working on improving file naming in the future. One of the nice things is that all the controls are in the app. It is far easier, and faster, to change an application than to change the mic hardware itself.

Larry: The quality of any mic is determined partly by the mic, but even more by the A/D converter it uses to convert it to a digital signal. Did Shure develop its own converters or license one from someone else and how would you rate/describe the quality?

Soren: Unfortunately I can’t talk specifics about what’s under the hood, but the converters are part of the MOTIV ‘engine’ that we built. Since it’s part of that system it’s hard to evaluate it against other converters.

What I can say is we’ve gone to great lengths to optimize the system, and they are a nice improvement over the converters onboard the iDevices. My favorite example is the settings for the DSP modes. What ended up in the app at launch was the 72nd revision, we were making tweaks every few days until we got it where we wanted it. These may be at accessible price points but we take the sound of them just as seriously as any other microphone we’d make.

Larry: If you could talk directly to an end use, what would you tell them about this mic?

Soren: Everybody should have an MV88 – great pairing with iPhone. It’s made some really outstanding recordings. Wonderful products. Super flexible. A necessary tool for bands – every musician should have one.

Content is such a part of our life and, all too often, audio gets left behind and takes backseat to video. Now, the MV88 equalizes the playing field. It was a fun thing to work on and a game-changer for all musicians.

Larry: Thanks, Soren, I appreciate your time.

It is said that the best camera is the one you have with you. In that vein, the best mic is one you can easily carry around. The MV88 fits that description. Higher quality and more flexible than the built-in mic of an iPhone, an easy-to-use app with lots of configuration controls, yet presets that allow you to record quickly without understanding a whole lot about audio.

If you are interested in recording music with an iOS device, this mic needs to be on your short list for affordable, easy-to-use, high-quality devices.

The MV88 is small, light-weight, high-quality and built with the legendary Shure reputation for ruggedness. Its a very cool little device.