SSD (Solid State Drives) drives are known for their performance, small size and ruggedness. However, for a long time, SSD drives were priced so that only the few could afford them. Today, however, we are seeing SSD drives appear at prices that are more within reach.

The good folks at OWC loaned me a ThunderBay 4 mini SSD drive to take a closer look at for a week. Here’s what I found.

NOTE: This unit has both SSD or spinning hard disk options. Because of the potential performance benefits, I only looked at the SSD version.

SECOND NOTE: OWC is also a sponsor of my podcast, Digital Production Buzz. 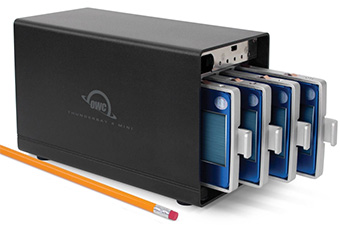 This petite unit – roughly 3 x 4 x 6 inches – is easy to setup, weighs very little, sits quietly on a desk, and, in RAID 0 mode, delivers the speeds you expect from an SSD drive. The unit can be configured as RAID 0 using Apple’s Disk Utility, or RAID 0, 1, 4, 5 or 1+0 using SoftRAID; which is RAID utility software, sold separately. However, in RAID 5 mode, while read speeds were excellent for a small, 4-drive unit, write speeds slowed more than I expected.

Because there are no moving parts in an SSD, the unit can easily survive very rugged handling, which makes it ideal for editors that need to travel; and it is small and light enough to fit just about anywhere.

RAID systems can be configured in multiple ways. The two most common are RAID 0 and RAID 5. RAID 0 provides the fastest performance, but, in the event you lose a drive, you lose all of your data. (Protecting data in the case of drive failure is called “data redundancy.”) RAID 5 systems provide data redundancy, but with a sacrifice in performance and storage capacity equal to the speed and storage of a single drive.

Personally, I prefer data redundancy to maximizing speed, so I generally prefer using RAID 5 when I have a choice.

Here’s an article that explains RAID levels in more detail.

The same week I was testing this OWC ThunderBay 4 Mini RAID, I was also looking at the Pegasus2 M4 SSD RAID from Promise Technology (OWC is on the right). Click here for that review. 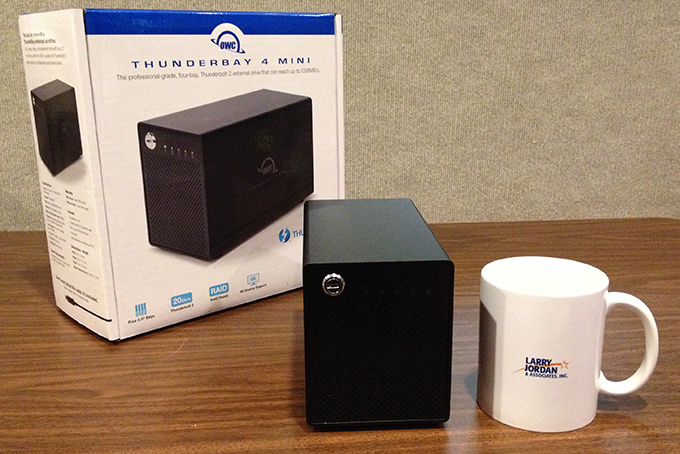 OWC ships the unit safely padded and nicely boxed. There are clear Getting Started instructions. The unit, as you can see here, is about the size of a coffee mug and two coffee mugs deep. (“Coffee mug” is the latest standard in measurement because, um, I can’t find a ruler in my new office.) 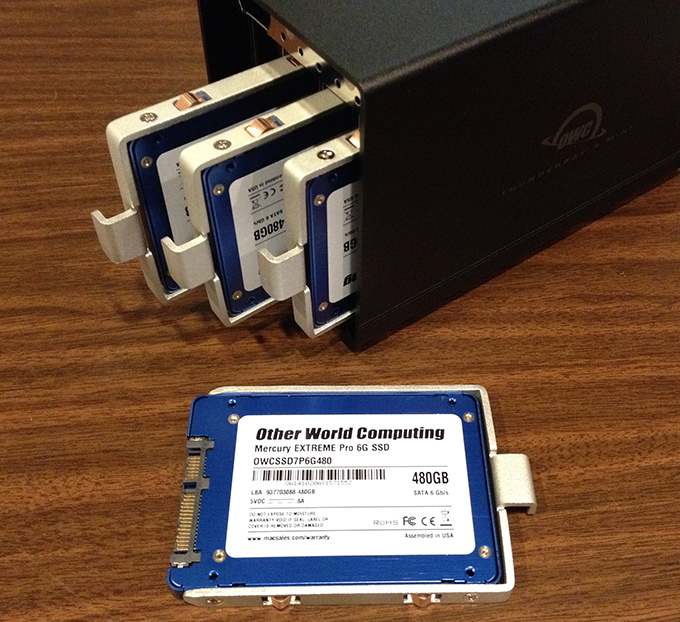 The unit has all four 2.5″ SSD drives preinstalled. Drives are available in a variety of sizes, starting at 240 GB but, unlike spinning hard disks, sizes are measured in Gigabytes, not Terabytes. (You purchase an SSD drive for its speed, not capacity.) All drives need to be the same size and type for optimal performance. 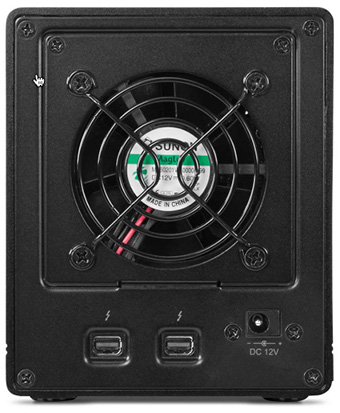 Connecting the drive could not be easer. Plug in a power cable, it uses an external transformer similar to most smaller hard drives, connect a Thunderbolt cable between the SSD and your computer and you are good to go. There are two Thunderbolt 2 ports on the back of the unit, allowing you to connect up to six Thunderbolt devices; which is the limit of the protocol. 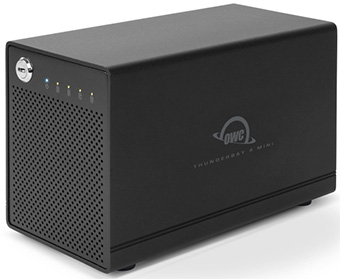 The fan is audible, but not distracting. It might be nice to have the fan spin a bit more slowly to decrease the sound, but it can by no means be considered “noisy.” The unit ships with a three-foot (one meter) Thunderbolt cable, so you can move it somewhat away from you and your computer. If you prefer, longer Thunderbolt cables are available.

Once the unit is powered on, it appears as a hard disk icon on your desktop.

I’ve reviewed SoftRAID in the past and like it a lot. I’m using it on all my RAID 5 devices. It is a software utility and driver that configures RAID systems without the laborious formatting delays required by hardware RAID systems. It adds a bit more to the price, but I believe the configuration flexibility, error checking, and utilities it provides are worth it.

For example, the ThunderBay 4 mini does not tell you if a drive has failed, but SoftRAID will. You can also use SoftRAID to verify that your drives are working properly, create RAID volumes using different RAID configurations, test drives for potential failure and, in general, manage your system much more efficiently.

When using the SoftRAID package, you can choose a storage capacity of 1, 2 and 4 TBs. For this review, I was using SoftRAID 5.0.5; which is the latest version of the SoftRAID software.

There is currently a known issue where Mac OS X 10.10 (Yosemite) does not support the TRIM function on non-Apple SSD drives. This lack of support will tend to decrease performance over time. There are also reports where systems upgraded to Yosemite no longer boot with a third-party SSD drive attached.

There are several work-arounds, none of them optimal.

Here’s an article that describes this issue in more detail. Be sure to read through the comments. Some of this is technical, but you need to be aware of the issue before you start having problems.

NOTE: When first running SoftRAID, it will ask if you want to modify the operating system to support TRIM functions. What I think it is doing is turning off kext-checking without requiring that we go into Terminal. This is the one screen I did not get a screen-shot of. This is a one-time only setting.

UPDATE: I’ve also included new tests run on a 5K iMac, in the Update section below. 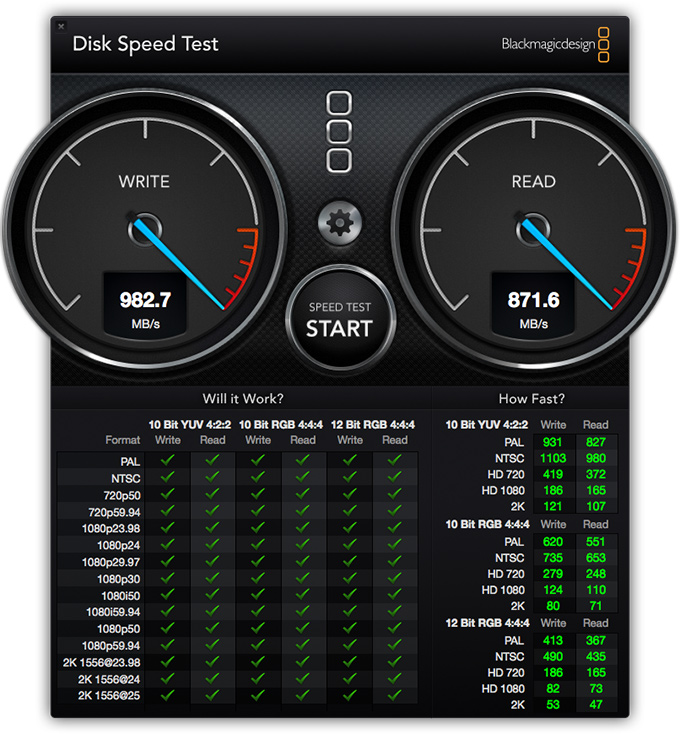 The screen shot above shows the performance specs of the internal drive of my MacBook Pro. It is normal that write speeds are different from read speeds. 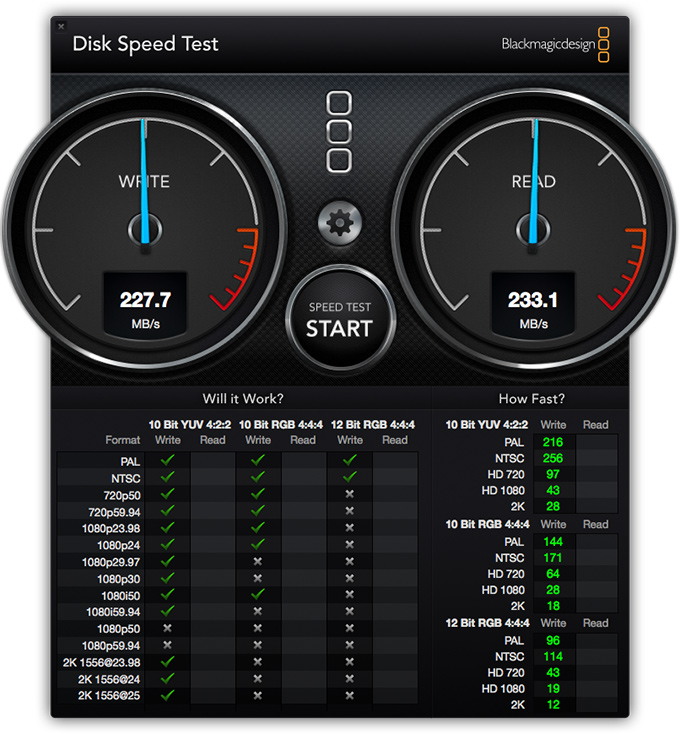 For a comparison, here are the performance specs for a 2-drive G-Technology Thunderbolt RAID 0. (The drive has a lot of data on it, speeds would be somewhat faster if the drive were totally empty.) 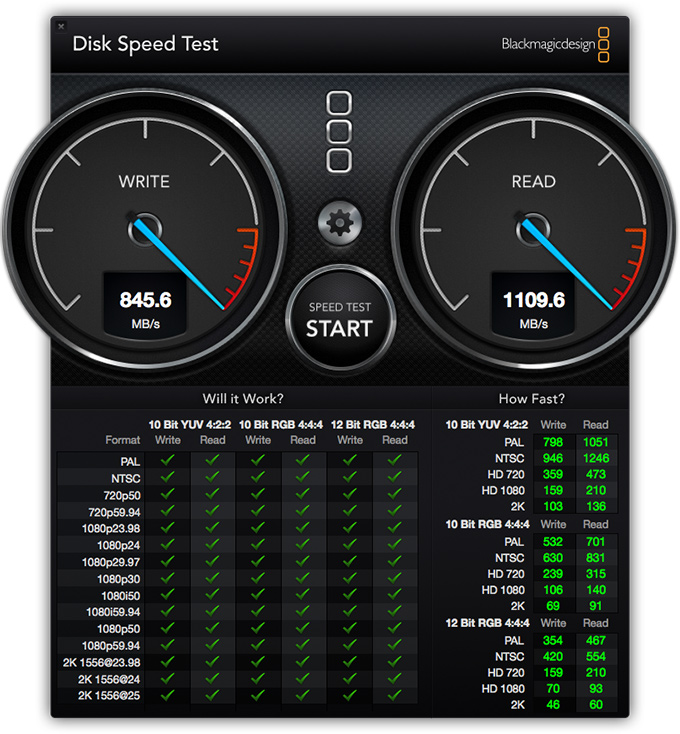 Here are the speeds of the ThunderBay 4 mini, when formatted using SoftRAID as a RAID 0. These are very acceptable speeds.

Read speeds are plenty fast for multicam editing, as well as editing any video format short of 4K uncompressed, or extreme bit-depth 2K files such as 12-bit RAW. Write speeds don’t need to be as fast as read, but these speeds are excellent for rendering and exporting. 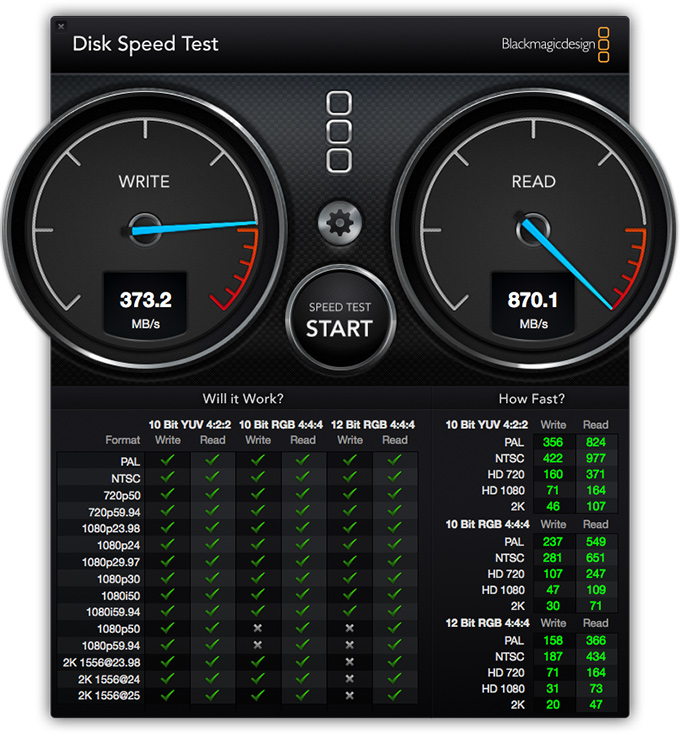 Because RAID 5 uses the equivalent of a single drive to store parity data, the decrease in read speed – compared to RAID 0 – is expected and normal.

NOTE: Speeds will also vary by computer and by how full the RAID is. Different computers achieve different speeds for the same RAID system. In general, I would suggest that variations of 10% or less be considered equivalent.

But, when the drive is formatted as RAID 5, something strange happens. Write speeds drop dramatically. While this isn’t a problem for most video formats – read speed is far more important for video editing – this write speed is close to what I would expect from a single SSD drive, not a RAID 5. I’m not sure what the problem with write speed is here. I have re-initialized and re-formatted the drive four different times and had the same results each time.

My new 5K iMac arrived a couple of days after I wrote this review. So I decided to include performance stats using my new system. Also, I realized that, while measuring maximum data transfer rates is important, it is even more important to examine the drive using scenarios that are typical for video editing. 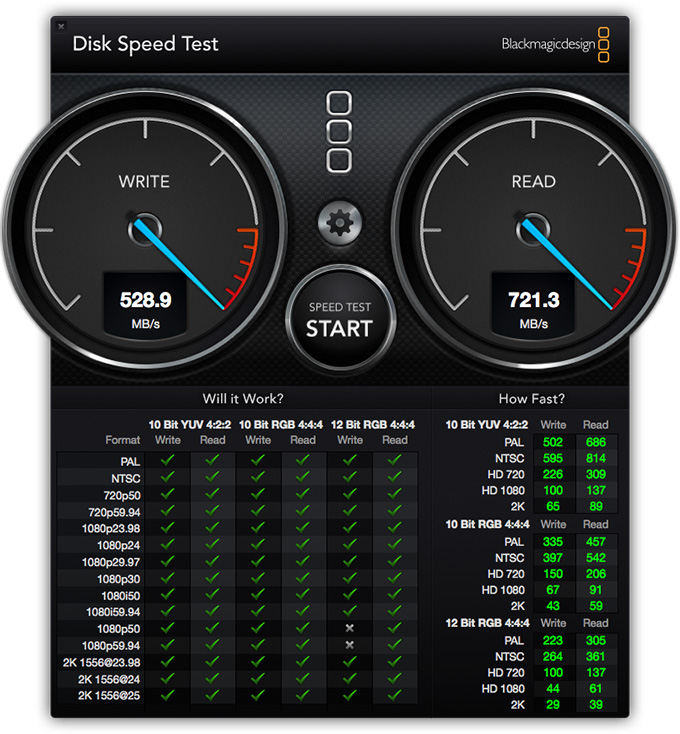 When then OWC is configured as a RAID 0, here are the results I get using a brand new 5K iMac. 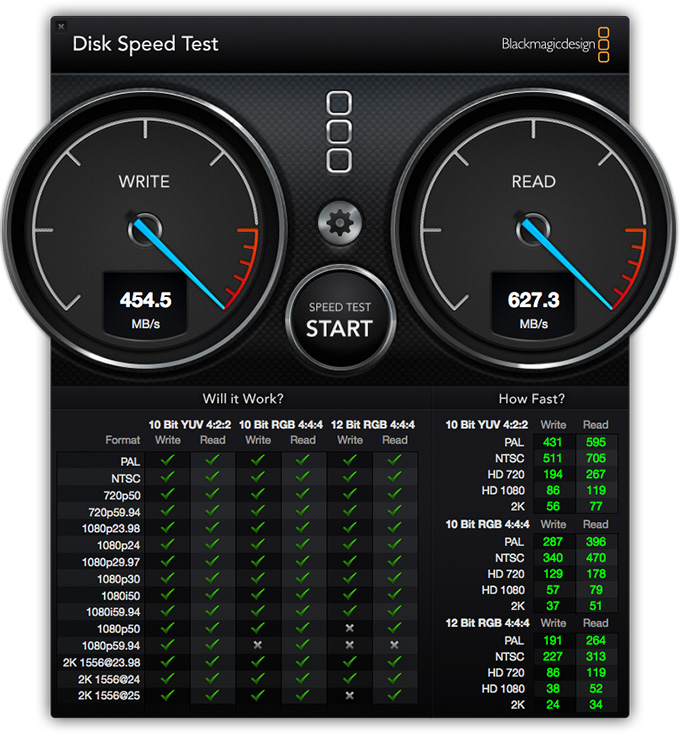 When the OWC is configured as a RAID 5, here are the results I get using the 5K iMac.

Notice the green check boxes at the bottom? These indicate all the different video formats that this system will support. In the case of the RAID 5 configuration, the OWC supports all video formats EXCEPT those with gray check boxes.

Basically, if you are doing single camera editing, this system is fine for all video editing except high-frame-rate, high-bit-depth files.

Next, I duplicated about 200 GB of data where both sets of files were stored on the drive. While speeds varied, duplication averaged around 500 MB/second; which is pretty darn fast.

Next, I decided to try a 16-camera multicam clip. Here, the internal SSD drive of the iMac’s Fusion drive altered the results. I like the Fusion drive because I prefer its combination of speed and storage, rather than an all-SSD system with limited storage.

In my first test, I created a 16-camera multicam clip using XDCAM EX 720p footage. This played back perfectly in real-time; and required about 100 MB/second from the RAID to do so.

Next, to work around the cacheing in the Fusion drive, I created a multicam clip of eight ProRes 4444 720p files, each of which was 56 GB in size. This created a data set far in excess of the 128 GB SSD drive included with the Fusion drive. So, even if it tried to cache, it wouldn’t be able to hold all the clips.

As you can see from the screen shot above, the data transfer rate of this multicam configuration was less than 300 MB/second. In other words, the OWC RAID was able to handle this load easily, as well.

NOTE: A more typical video format is ProRes 422, which creates smaller files than ProRes 4444. So, using ProRes 4444 puts an extra heavy burden on the RAID.

It is easy to get blinded searching for “the fastest” system. However, in most real-world editing applications, the system will spend far more time waiting on you to make a decision than you will waiting for the system to deliver data. Speed is important, but so is the price, reputation of the manufacturer, and storage capacity.

There is an interesting inverse relationship between data transfer speed (“performance”) and storage capacity. Given the same amount of money, the faster something transfers data, the less data it can hold. For example, here is a list of devices based on performance:

In each case, as you move down the list, each device holds more than the device above it, but transfers data more slowly.

I really like the petite size and ruggedness of this unit. It is reasonably quiet and, when configured as RAID 0, plenty fast, though not blindingly so.

However, the slow RAID 5 write speeds concern me, as does the issue of SSD drives running properly in Yosemite. OWC has no control over what Apple does with its operating system and all third-party RAID developers are in the same boat. The issue of lack of TRIM support in OS X is not limited to OWC. But OWC does have control over RAID performance. I’m looking forward to learning how to improve the write speed of this unit.

This unit would be best used:

The big limitation is that SSD drives don’t hold a lot of data. Configured as a RAID 5, this unit only hold 1.42 TB of data. As a RAID 0, it holds slightly less than 2 TB. If storing lots of data is more important than speed, the big brother of this unit: the ThunderBay 4 RAID is a better choice.

Here are two other relevant reviews: