However, Final Cut provides a hidden option – Storage Locations – that can simplify your media management.

This copies media from wherever it is located into the library. (Remember, the library is actually a “super-folder” that looks like a single file, but can hold hundreds of files and folders.)

The benefit to this is that media automatically travels wherever the library goes. No more unlinked media; and anyone who’s been editing for a while knows what a hassle finding unlinked media can be. When I’m teaching new users, I strongly recommend they use this option to for their projects.

The disadvantages are that:

Well, that last point isn’t actually true. You can open two projects in Final Cut and move the media between them inside FCP. But you can’t access media from outside Final Cut once it’s stored in a library. Because I reuse my media between multiple applications as I create different tutorials this last limitation is a big deal.

So, when copying media into a library, we trade off increased storage and inaccessibility versus the security of knowing our media won’t be accidentally lost or erased.

When you import using this option, Final Cut imports a link (the path and file name) to your media into the library, rather than the media itself.

The benefits to this are:

The big disadvantage to this option is that if you move the library to a different computer or editor, you must also move all the media along with it. Otherwise, clips will “unlink,” meaning that FCP X can’t find them because the path name has changed. Unlinked media means you won’t be able to play your project until you find and relink them.

For me, leaving files in place is ideal because I store all my media in the same place and reuse it between tutorials.

But, for many editors, this option is limited because it assumes you have an organized structure to your media before the project starts, allowing all media to be quickly located. Which, when you think about it, applies to very few editing projects.

Select the Library in the Library List, to the left of the browser. Open the Inspector and  click Modify Settings, next to Storage Locations. 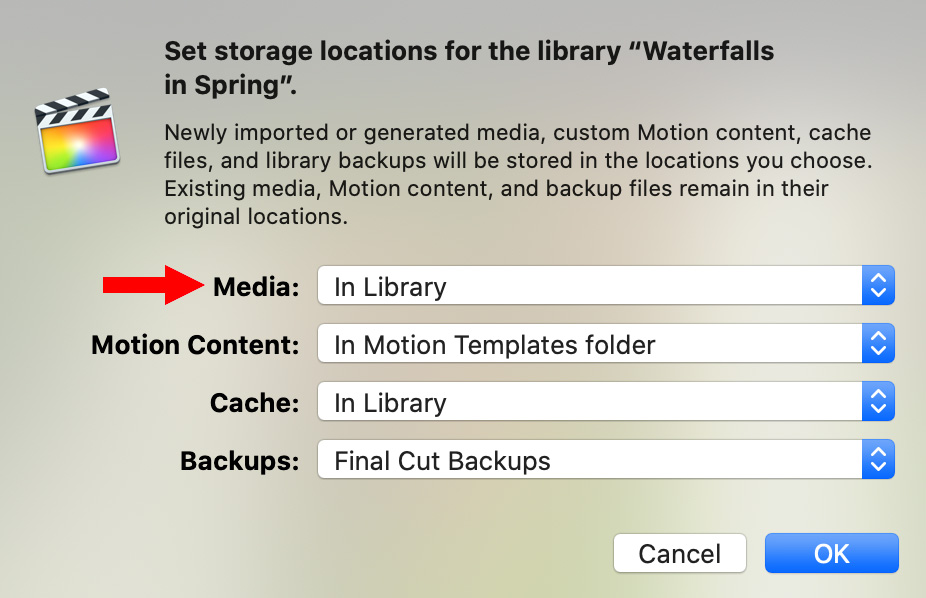 The key setting is Media. By default, it stores all project media in the library. 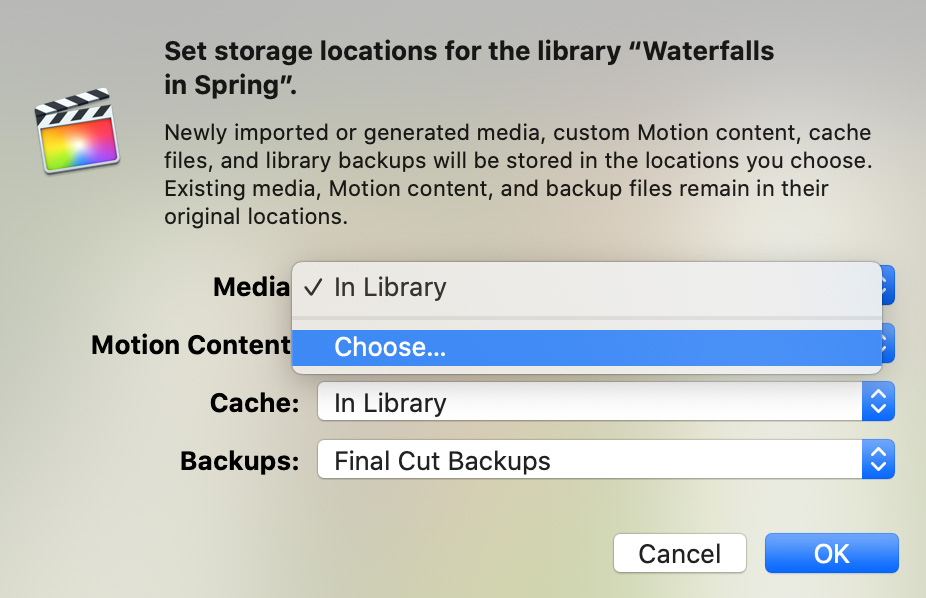 However, if you select Media > Choose, you can specify a new folder, outside the Library, in which all project media is stored. This folder can vary by project and can be located anywhere on your attached storage, including servers.

Here, for instance, I’m creating a new media folder for an upcoming project, on a server volume named “Shared Storage;” however, this could just as easily be a locally attached device.

The benefit to this approach is that, regardless of where you import media, it will all get transferred to this new media folder! 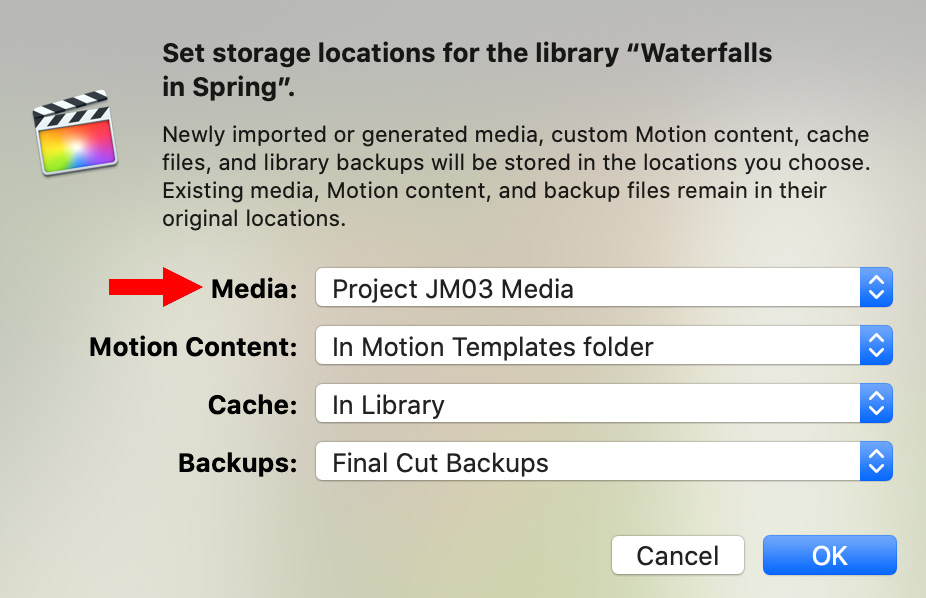 This media location is instantly reflected in Storage Locations.

Though all newly-imported clips are displayed immediately in the browser, behind-the-scenes, FCP X is copying (NOT moving) them to this new location. 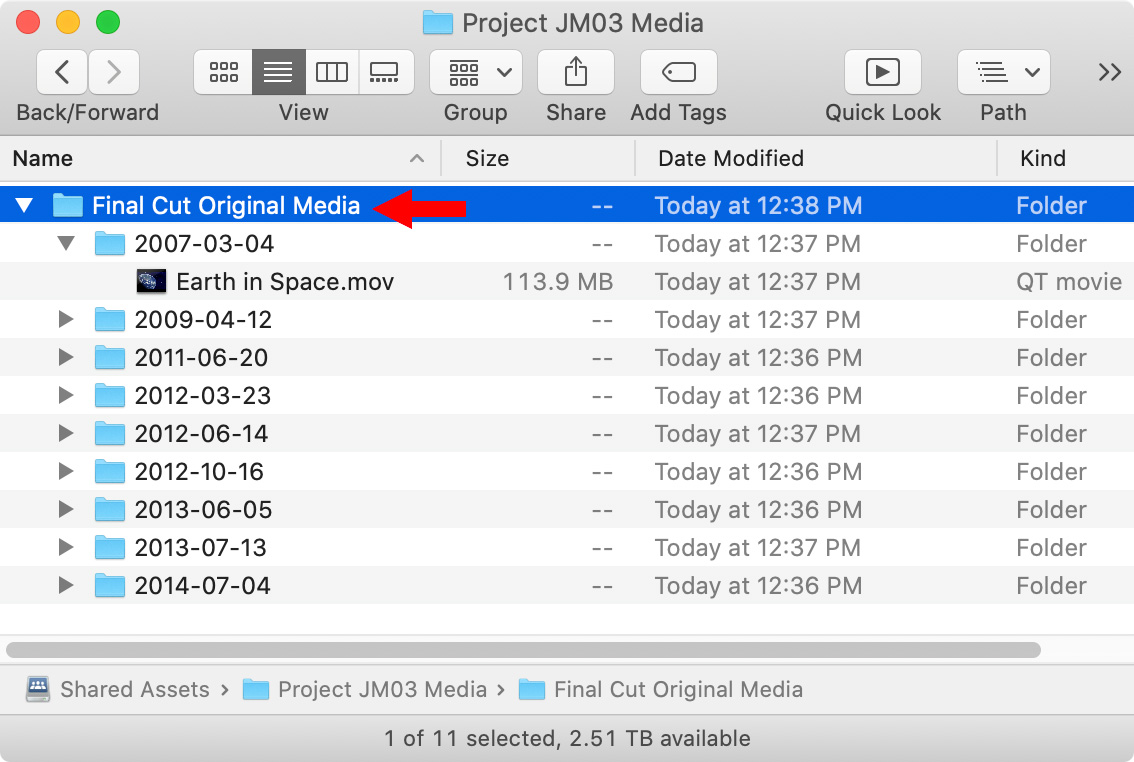 Here, for example, I’ve imported a variety of clips into Final Cut. They are copied to a Final Cut Original Media folder in this new location and stored in folders by creation date.

This option provides a significant and useful compromise between the security of storing all files in the library, with the flexibility of  directly accessing files scattered about your hard disk. This also provides the added benefit of each Library pointing to its own folder. However, files are copied, which is fine if you are importing from a camera card, but will duplicate media if  you are copying files already stored on your hard disk.

This storage option means all your project media is stored in a single folder – regardless of where it originally came from. This simplifies backups, archiving and moving projects between editors.

Give it a try and see what you think.