Most of the time, when video editing software creates a slow-motion clip, all it’s doing is playing the same frame multiple times. For example, 50% slow motion means playing every frame in a clip twice.

While this slows down the action, it doesn’t yield particularly good resolution between frames.

A better way to create slow-motion is to “over-crank” your camera. This is an old film term which means to shoot at a faster frame rate than you expect to play back. For example, if you shoot the source image at 120 frames per second, then play it back at 30 frames per second in your project, the apparent playback speed is 25% of the original. And, assuming the camera was properly focused and exposed, the resulting slow-motion looks really lovely.

NOTE: This technique requires shooting the original video at a faster frame rate. You can’t go back after the video is shot and add frames that were not part of the original recording. Re:Vision Effects Twixtor has an excellent algorithm that attempts to guess what these frames were, but it isn’t the same as shooting them with the camera.

I call these types of clips: high-frame-rate clips.

An iPhone has the ability create this high-quality slow-motion when you shoot video. Simply select the “Slo-Mo” option when using the camera. 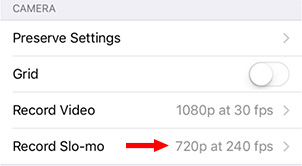 To change the slow-motion frame rate on your iPhone, go to Settings > Photos & Camera. Then, in the Camera section, tap the text to the right of Record Slo-mo. 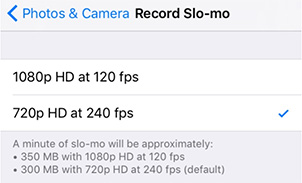 This allows you to switch frame rates. Because of the bandwidth required for larger frame sizes, we can either shoot more frames at a smaller size, or fewer frames at a bigger size. As with many things in life, there’s no free lunch.

NOTE: Slo-mo video takes a lot of space. Make sure you have enough room on your phone. 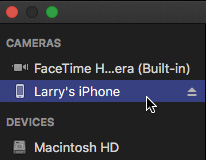 Once the video has been shot, you can easily transfer the video into Final Cut Pro X using the Media Import window.

High-frame-rate slo-mo clips are indicated by the small gray “clock” icon in the top left corner of the clip’s thumbnail.

To import media from your iPhone into Final Cut:

While iPhones are virtually everywhere, there are many other cameras that shoot high-frame rate video; the Vision Research Phantom comes first to mind with frame rates in the tens of thousands of frames per second.

Whether you use an iPhone or a more traditional video camera, the process is the same:

When you import a high-frame-rate clip into Final Cut, the software analyzes the clip to determine its frame rate and decide how best to play it back.

When you play a high-frame-rate clip in the timeline it plays at “normal” speed. In other words, the playback speed looks like you would see it in real life. This is because FCP X adjusts the clip speed during playback to compensate for the differences in frame rate.

To convert a high-frame-rate into extreme slow motion you have three options. First, select the clip in the Timeline you want to adjust, then:

(I tend to use the Retime icon under the Viewer – it looks like a stopwatch.) 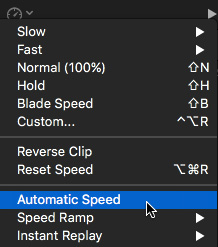 Choose Automatic Speed. This tells FCP X to play every frame in the clip, but at the frame rate of the project.

NOTE: Choosing “Slow” does not use all the extra frames you shot, instead, it uses frame doubling; which does not provide the same playback quality at all.

As you can see here, by looking in the orange Retiming bar, the speed of this clip instantly slowed to 13%, creating a very fluid, clean slow-motion playback.

To reset the clip back to “Normal” speed, choose Normal.

If you have the time – and foresight – to plan a slow-mo shot during production, the results will be far better than anything you do later in software.