Automated tools simplify complex processes. But, if you don’t know what the automated tools are doing, it is easy to make things worse, rather than better.

An example of this is the automated audio enhancement settings in Final Cut Pro X. 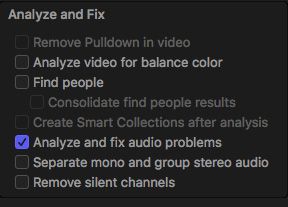 You enable these settings either during import by checking Analyze and fix audio problems in the Media Import window or by selecting a clip in the Browser or Timeline and choosing Modify > Analyze and Fix. 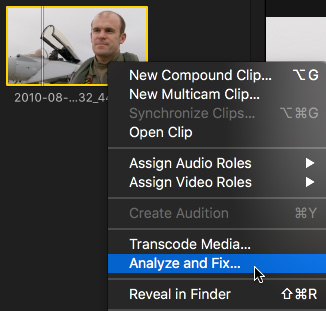 NOTE: You can also select a group of clips in the Browser, right-click and choose Analyze and Fix.

In order to understand what’s going on, and the limitations this presents, we need to first understand two basic audio concepts:

All sounds create vibrations in the air which travel from the originating source to our ears, causing our ear drums to vibrate. This vibration stimulates nerves in our ears, which sends signals to the brain, which we translate as sound.

Without those basic vibrations, we wouldn’t hear anything. This is why there is no sound in space; the sound of rocket ships on Star Trek not withstanding.

While there is an essentially unlimited range of frequencies that any noisy object can create, humans hear a fairly specific range of frequencies: from 20 Hz to 20,000 Hz (the green bar in the illustration above). The exact range depends upon your age and the volume of the originating sound. 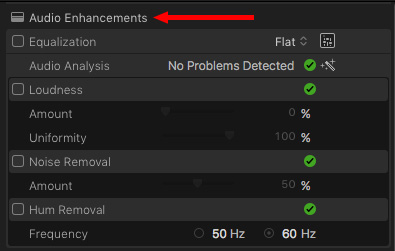 There are four categories of Audio Enhancements in the Inspector:

All of these, except for Loudness, are actually changing the frequencies of the sounds in a selected clip.

NOTE: Because Loudness adjusts volume, not frequencies, I am ignoring it for the rest of this article. 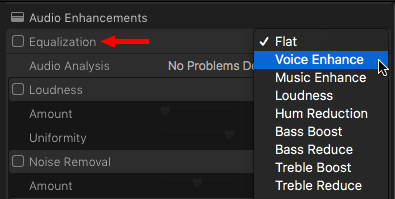 For example, the pop-up menu for Equalization shows nine options for adjusting the “sound” of a sound. Flat makes no changes to the original recorded sound. The others boost specific frequencies or reduce others. 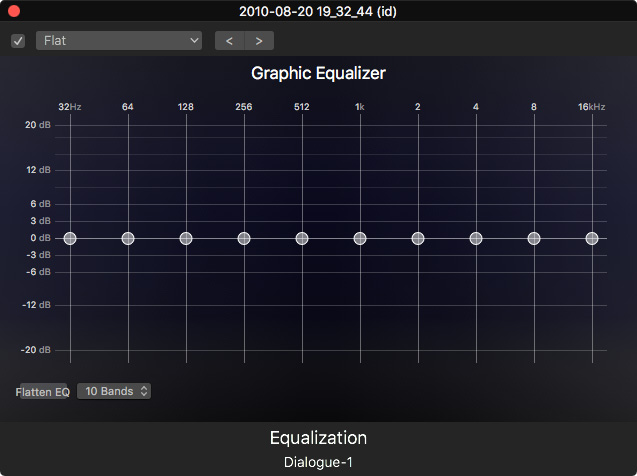 This is called a “Graphic Equalizer” and it divides the range of human hearing into frequency bands from low on the left to high on the right. Because audio is logarithmic, the range of frequencies on the right is compressed, compared to those on the left. This is just the way our ears work.

NOTE: The numbers across the top represent the range of frequencies controlled by each slider. See how each number to the right is exactly double the value of the slider on the left? Each slider represents an octave (the change in pitch of two notes separated by eight white keys on a piano). This is a ten-octave Graphic EQ, which represents the ten octaves that the average human can hear.

This screen shot shows the settings for Flat, where no changes are being made to any frequency; all the settings are “flat,” or equal. 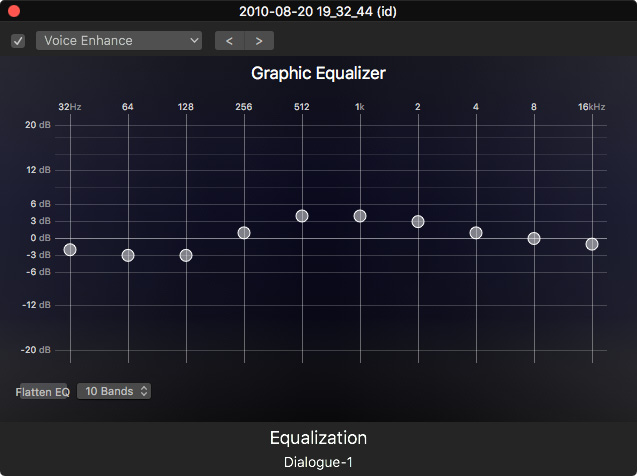 Changing the EQ (which is short for “Equalization”) to Voice Enhance shows that the lower frequencies are reduced, while those in the mid-range of human speech are boosted, or “enhanced.” 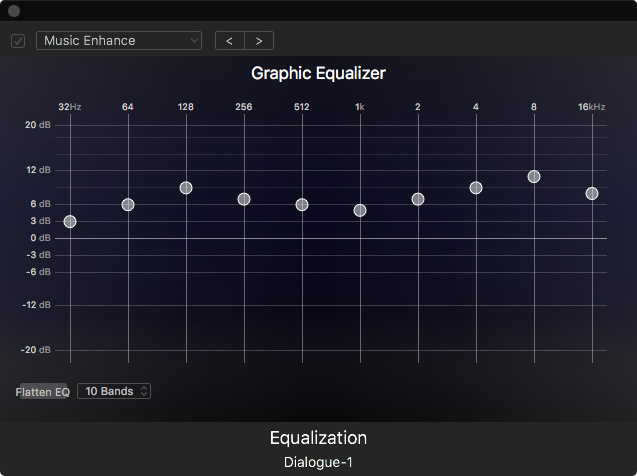 Changing the EQ to Music Enhance shows the opposite. Everything is a bit louder, except the middle frequencies which are the most important range for human speech.

In both cases, we are adjusting the same range of frequencies, but in different ways, to achieve different results. You could do the same as the presets by dragging the different sliders up or down, then picking the version that sounds the best to you.

Hum removal is a special case of EQ. Hum is most commonly created by interference between power and mic lines. In the US, this hum centers on a frequency of 60 Hz, well below human speech. (Elsewhere in the world, the hum is 50 Hz; even lower.)

Removing hum is as “easy” as removing all sounds at 60 Hz. Since this is below human speech it doesn’t cause problems with the sound of our actors. Except…

Well, hum is never a single pure tone. It’s a series of tones, called “harmonics,” that are multiples of the original frequency. 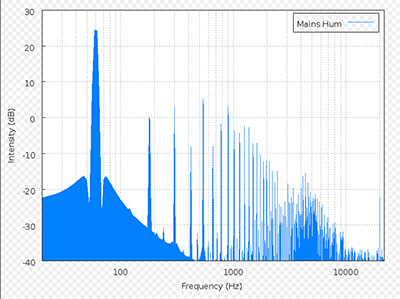 For example, this chart from Wikipedia shows the harmonics caused by a 60 Hz tone.

The problem is that as soon as those harmonics exceed about 200 Hz, they start to interfere with the speech of your actors. Since removing a tone requires removing ALL sound at that frequency, this means when we remove a tone, we have also removed all of the actor’s voice at that frequency.

We can’t have it both ways, we can’t remove noise at a specific frequency, without removing all other sounds at that same frequency.

This problem becomes even more significant when reducing noise. 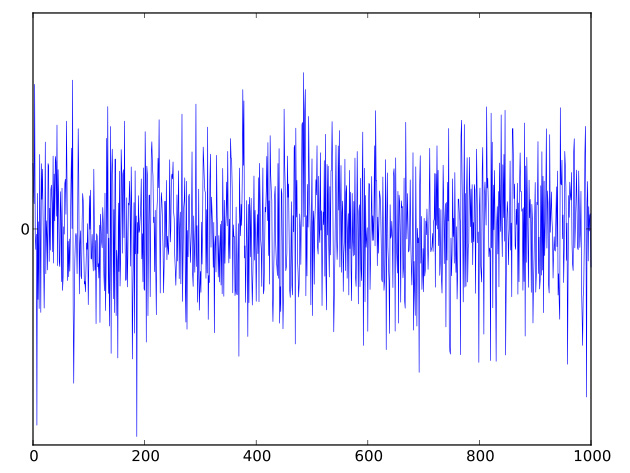 For example, this image from Wikipedia is an example of what hiss might look like. A wide range of disorganized frequencies, all at different levels.

When this noise is recorded at the same time as an actor’s voice, the two sets of frequencies overlap. And, since human hearing only hears ONE range of frequencies, the hiss and the voice are inextricably intermingled.

Using the noise removal feature in FCP X – or any audio application – to remove the noise, will also remove the actor’s voice at the same frequency. Because noise spans such a wide range of frequencies, unlike hum, removing noise often causes the voice to sound electronic, artificial, or just plain “bad.”

This isn’t the fault of the tool. Noise reduction software is designed to figure out the frequencies that represent a noise and remove them. And, at the same frequency, there is no way to separate those sounds that are noise from those that are speech.

In practice, this means that, in most cases, we can’t actually “remove” a noise, we can only reduce it. If we need a noise to be totally removed, we need to re-record the audio – which is what ADR is all about.

Most audio repair tools are designed to manipulate frequencies to enhance the ones we like and reduce the ones we don’t. The problem is that everything we hear is all represented by the same range of frequencies.

The more you understand about what frequencies are and how we use them to hear and shape sound, the better your audio will be.

And this key rule still holds true: The best way to improve the quality of your audio in post is to concentrate on recording it with the best possible quality on set.