If ever there was a confusing name for an effect, this is it. Just what does “Automatic” mean?

Setting the speed of a clip to Automatic Speed means that the Timeline plays every frame in a clip, regardless of the frame rate that the camera used to record the clip. The net result is that Automatic Speed allows us to create some really stunning slow-motion images with great clarity.

NOTE: The fast-motion equivalent of this technique might be considered time-lapse, as that, too, is best recorded in the camera. 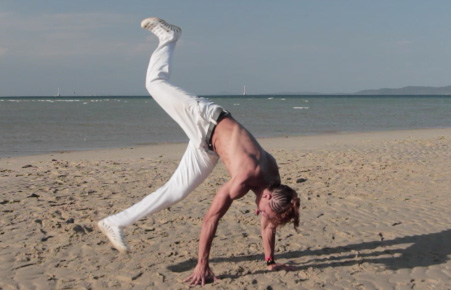 This gets a bit confusing, so let me explain. Let’s say you are shooting 50 fps video. When you edit that clip into a 25 fps project, Final Cut skips every other frame in the clip during playback in the Timeline so that the motion in the clip seems normal.

So far, no problem. Everything works as you would expect.

However, let’s say you shot that clip at 50 fps so that you could slow it down during editing. The benefit to shooting at faster frame rates than your project – called “over-cranking” – is that images are higher quality with smoother motion than if you slow it down using clip speed changes in Final Cut Pro X; or any other software, for that matter.

This is the key point: Over-cranking yields higher-quality slow-motion than changing speed in software.

Why? Because, in essence, what Final Cut does when slowing a clip down using software is duplicate frames. For example, assume that the frame rate of a clip in the Timeline matches the frame rate of the Project:

You get the idea – while the number of duplicated frames varies depending upon how much you are adjusting the speed of the clip – duplicating a frame doesn’t give us any new information, it just repeats the same frame over and over.

The slower the motion, the more your video looks like a series of still images.

To reduce the “series of stills” look, Final Cut allows us to add Frame Blending or Optical Flow. 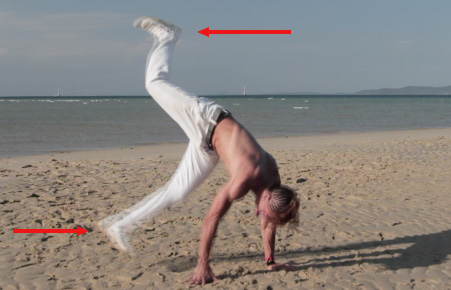 What Frame Blending does is create a short dissolve between each frame, thus “blending” the transition from one frame to the next. While this does reduce the “series of stills” look, as you can see from the screen shot, all moving objects tend to be blurred. 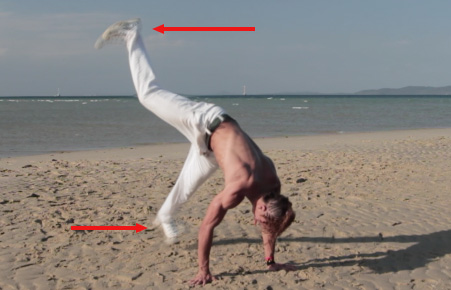 The other option is Optical Flow. Here, after a clip is analyzed, Final Cut creates “in-between” frames that seek to approximate where the pixels are moving between one frame and the next. This can create a pretty clean slow motion. Or, as you can see in this screen shot, it creates images that tend to fall apart. Its impossible to know which it will be before you try it.

As there are no settings for Optical Flow, if it works – it looks great. If it doesn’t – it doesn’t. 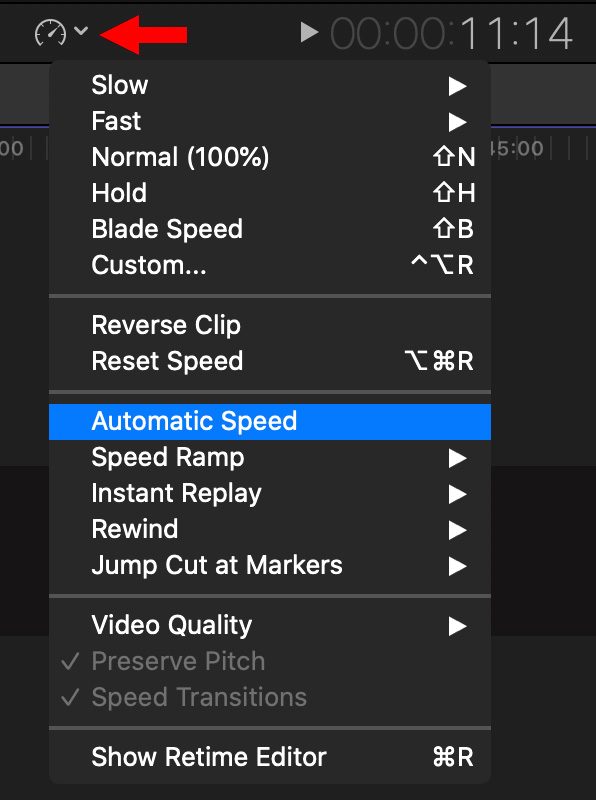 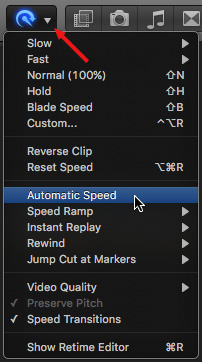 The “Automatic Speed” option exists in both Modify > Retime and the Retime menu in the Toolbar. What this does is play every frame in a clip to match the frame rate of the project.

So, a clip shot at 50 fps and played in a 25 fps project with the Automatic Speed option enabled would play at 50% speed AND, because each image was shot by the camera and not created in the software, the images look MUCH cleaner, crisper and with very smooth motion during playback.

The only disadvantage to this technique is that the duration of the clip always changes based upon the difference in frame rates.

NOTE: Applying a second speed change to a clip running in Automatic mode is not advised because it always adds artifacts and choppiness to the playback. (Though not as much as if Automatic mode were not applied.)

Automatic speed is how we are able to shoot 2,000 fps clips with a Phantom camera and have them playback in stunning slow-motion in the Timeline.

The key to remember is that Automatic Speed plays every frame in a clip to match the frame rate of a project, regardless of the frame rate the camera used to record the clip.

Here’s a video that shows this technique in action.