One of the hottest cameras on the planet right now is the Blackmagic Pocket Cinema Camera 4K (PCC 4K) from Blackmagic Design.

When the team at doddleNEWS asked me to review the camera, I hedged. The last time I did any serious shooting, video was still standard definition. Since then, I’ve made a point to hire cinematographers, because the quality of their work is higher than mine.

So, I didn’t want to review the camera. But, when the doddleNEWS team persisted, I realized that I could provide substantial information looking at the camera from an editing perspective, because there are surprises in store if you don’t pay attention. 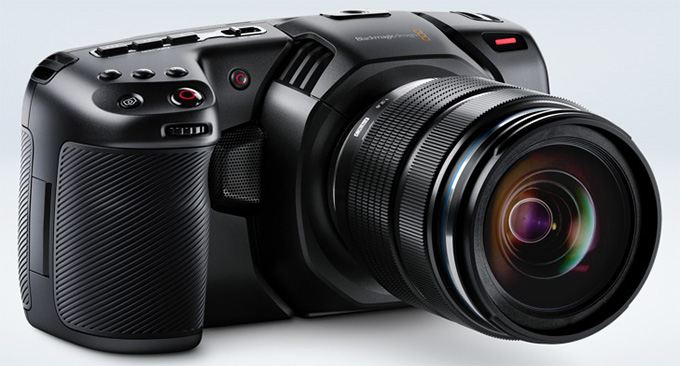 In this review, I want to:

NOTE: Both the camera and NLEs are continually updated. Expect these comments and recommendations to evolve over time.

There’s been a lot of discussion about the dual ISO settings that the camera provides.

What the ISO setting does is, within the 13 stops the camera shoots that span from pure black and pure white, determine where mid-point gray will be set within this range.

While you can record 1080 HD media to an SDSX card, you can NOT record UHD or 4K media to it. It is too slow.

For 4K media, you either need to use a CFast card (very expensive) or an externally attached SSD connected via USB-C. The SSD needs to be approved by Blackmagic and here’s a link listing supported cards and SSDs.

I’m using a Samsung T5 SSD for my tests. This supported all image sizes and frame rates with no problem. By the way, recording 4K RAW at 60 fps requires write speeds of 456 MB/second! Whew!!

NOTE: Here’s my review of the Samsung T5 card.

Each of these two codecs has different compression settings:

NOTE: To my way of thinking, you don’t buy a camera like this to shoot ProRes Light or Proxy images. So, while it is nice the camera supports these, I’m not going to factor them into this article.

NOTE: I will use the UHD frame size for the rest of this article.

Each of these formats also support eight! different frame rates, measured in frames per second (fps):

Finally, when shooting ProRes, you can pick between three different dynamic ranges. I’ll define and illustrate these later in this article. (CinemaDNG only uses the Film setting):

Which of these options should you use for your next project? Well, it depends on what you want to do. Let’s take a look.

Frame size has become an emotional decision. From my perspective, when viewed on screens smaller than 100 inches, you can’t see the difference between 4K and 1080p, unless you are sitting within two feet of the screen. Are an actor’s emotions any more real if you are looking at them in 4K?

On the other hand, it feels very righteous to say: “I shot this in 4K.” Clearly, bragging rights are involved. Also, higher resolutions allow you to charge more for your project.

Again, this is a personal decision. If you are shooting for the web, 1080p is fine. Otherwise, shoot the frame size required by your distributor.

NOTE: As with frame size, religious wars are fought over frame rates and motion blur. The short answer is pick what works for your project. I am a fan of higher frame rates.

Above all, avoid changing frame rates as much as possible. When in doubt, I recommend shooting 30 fps for web videos. This is a good balance between image clarity and smaller media file sizes and it’s supported by all NLEs.

CinemaDNG is an image sequence, a collection of individual frames, collected into a folder. When you choose the different compression options, you are determining how much each frame is compressed.

NOTE: CinemaDNG only records in Film mode and is considered a RAW image format.

For comparison, here are the file sizes, using the same frame size and frame rate, but shot using ProRes 422 HQ and 422. Each clip is exactly 9:29. I shot both Video and Film modes so we can compare file sizes.

As you see here, while the compression setting for the codec makes a difference, the dynamic range setting does not.

Here are the file storage requirements for UHD/30:

Just to stress, these files are REALLY large!

As you will see, there are significant differences in how each of these settings look.

If you plan to edit PCC 4K footage using Final Cut Pro X, you’ll need to shoot ProRes, because Final Cut Pro X does not support CinemaDNG. (It imports it as a series of still images, not clips).

NOTE: If you import a CinemaDNG RAW frame, FCPX converts it to Rec. 709 color space.

Here are my recommendations for the PCC 4K camera and Final Cut Pro X: 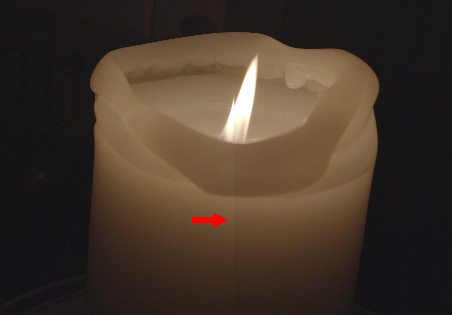 This is a split screen between ProRes 422 HQ (on the left) and ProRes 422 for footage shot in Film mode. Note the difference in mid-tone values in the middle of the candle: ProRes 422 is slightly darker. This is not noticeable when recording in Video mode. Plus, using ProRes 422 saves almost 34% in storage space.

I really don’t recommend using Compressor to convert CinemaDNG, though you can do it. First, it takes forever and, second, it remaps the color space. 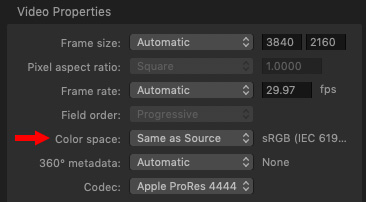 Apple Compressor will convert CinemaDNG into ProRes, however, you need to change the Color Space setting in the Video Inspector to Same as Source. To preserve the maximum color fidelity, be sure to convert it to ProRes 4444.

Additionally, Compressor doesn’t support 30 fps image sequences. Instead, it converts a 30 fps sequence into 29.97 fps. This may have implications for sound sync if you are shooting double-system sound.

NOTE: This conversion process is NOT quick. Converting a ten second CinemaDNG clip to a matching size ProRes 4444 took 3 minutes, 13 seconds. This means converting one minute of CinemaDNG to ProRes 4444 will take 20 minutes! This is the slowest of the three software I used in writing this article.

Faster CPUs with more cores will speed this. Compressor does not significantly use the  GPU in this process.

Premiere, like Final Cut, doesn’t support CinemaDNG directly. Like FCP X, it imports CinemaDNG as a series of still images, rather than a clip. And, while FCP X imports them quite quickly, Premier took about a minute and twenty seconds to import ten seconds worth of images.

Based on this, Premiere is not a good choice to edit native CinemaDNG files.

NOTE: Premiere does provide the option to import Image Sequences, but this option does not recognize CinemaDNG files.

Adobe Media Encoder can import a CinemaDNG file, but you first need to Enable Import as Image Sequence in the fly-out menu from the Media Browser panel.

Encoding a 10 second RAW clip into ProRes 4444 took 48 seconds, or, roughly, 4.8 minutes to convert a minute of footage. Four times faster than Compressor. 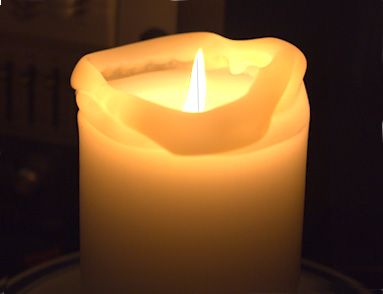 The good news is that the converted file that AME created is virtually indistinguishable from the source file, as you see displayed here in Premiere. Source image on the left, converted ProRes 4444 image on the right. The split goes through the middle of the flame.

Opening a ten-second CinemaDNG file in DaVince Resolve took about 2 seconds and it was opened as a clip, rather than an image sequence.

Even better Resolve recognized the correct frame rate and changed the timeline to suit. 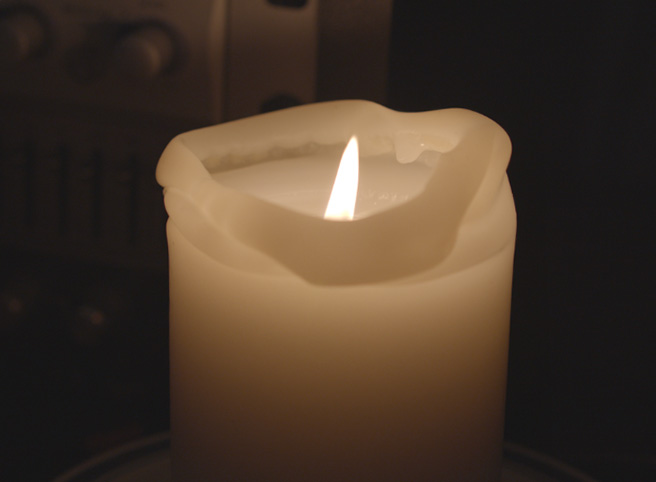 Finally, it provided the most accurate color for the source clip. while still retaining lots of shadow detail.

NOTE: The following images were shot at ISO 400, f/6, 180° shutter, with white balance set to 3200° K. No color adjustments or LUTs were applied, except for the last image. The only light is from the candle.

Film has the greatest amount of shadow detail, while Video has extended highlights. All three are displayed in Rec. 709 color space.  To my eye, Video is over-saturated.

The same image, but including the Vectorscope

The same image as immediately above, but displaying the Vectorscope.

OOPS! FORGOT TO SWITCH TO HDR

Final Cut Pro defaults to creating projects in Rec. 709 space. To change that, we FIRST need to change the Library to Wide Gamut HDR. Then, change the color space of the project. In this example, I’m using HDR 2020 HLG.

Now, when comparing ProRes Film (left), Extended Video (center), and Video, we can push the highlights a LOT further with Film than the other two. In this image, I raised highlight values as far as I could for each image without causing the highlights to blow out. As you can see, Film gives us the greatest latitude for moving into an HDR color space.

NOTE: The only way to see HDR media correctly is on an HDR monitor. The Mac display, though extended to Display P3, is not a true HDR monitor. 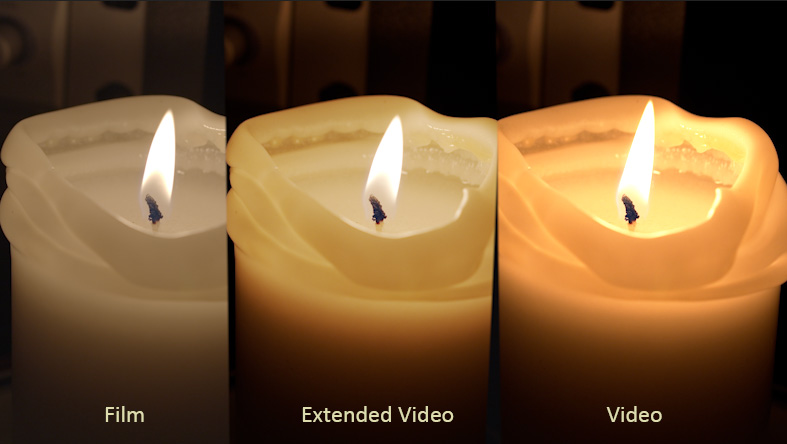 So, what have we learned?