Let me start by saying that I am not an expert in surround mixing – I’ve never done a professional surround mix. So the purpose of this article is to show you how surround mixing works in Audition so that you can continue learning and experimenting on your own.

The only difference between surround sound mixing and stereo mixing is that we are able to pan our tracks between six speakers, rather than two.

However, that sentence is analogous to saying: “The only difference between black-and-white video and color video is that we added color to the image.” The simple act of adding color – or multiple speakers – opens up a vast new world of creative possibilities and technical challenges.

Before we jump into mixing, we need to get the gear. Audition and your Mac can import, edit, and mix surround sound without any additional gear. However, in order for you to HEAR the results, you need an audio interface.

A unit that I used for my seminars  in the past on surround sound was the PreSonus FireBox – however, that unit is now discontinued.

A current choice is the mAudio ProFire 610 – up to 10 channels of audio output  connected via FireWire. However, with Avid’s recent sale of its mAudio assets, I’m not sure about the long-term future for mAudio.

The key point is that you need six discrete audio output channels from your computer. You can not use your headphone jack, TOS-Link, nor the digital audio outputs from your Mac – these only support stereo signals. You must get a separate audio interface.

Next, you need to attach a separate speaker to each audio output. An inexpensive way to start is to use the Logitech Z-906 system. (No sense spending a ton of money when all you are doing is experimenting.) I also really like the Bose Acoustimass 10 system. This is the system  I’m using now.

NOTE: If you have favorite audio gear you want to recommend, please add a comment below. The last time I built a surround system, I used PreSonus and Bose systems.

There is a standard way of addressing surround tracks – which is detailed in this article.

Map each 5.1 channel to the audio interface output: 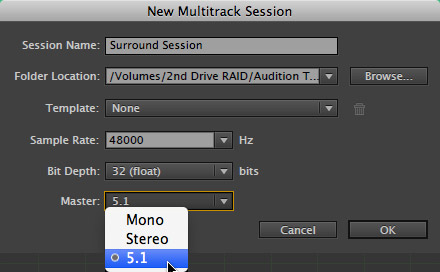 In the past, when we mixed, we created a stereo output. However, to create a 5.1 surround output, we need to first create a new session and specify that we want to create a 5.1 mix. You can’t change the output type after the Multitrack Session is created.

Create a New Session (type Command+N) and change the Master popup to 5.1.

When the new session is displayed, notice that the stereo pan slider is replaced with a weird-looking blob. This is the surround pan control.

In a stereo mix, you don’t make the left or right speaker louder or softer, we make the amount of sound going to each speaker louder or softer. This process works the same in surround, except we have six speakers to work with, rather than two. When you create a surround mix, you are adjusting the amount of gain from  each track that goes to each speaker. (That’s an important point. Surround mixing is based on tracks, not individual clips.)

Working with bass is easy. Low frequency sounds radiate everywhere and our ear can’t hear their direction. So the location of a subwoofer  and deep bass audio is not particularly relevant. Pinpointing the location of a sound requires high-frequencies.

NOTE: The sub-woofer handles all frequencies below around 80 cycles. This encompasses the bottom two octaves in music. (As a matter of trivia and point of comparison, the frequency of the lowest note on a piano is 27.5 cycles. The highest note is 4186 cycles, according to Wikipedia.) 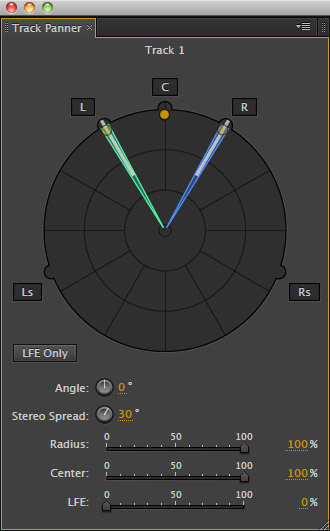 Double-click the surround panner icon in the track header to display the Track Panner panel. This screen shot shows the panner at its default settings. 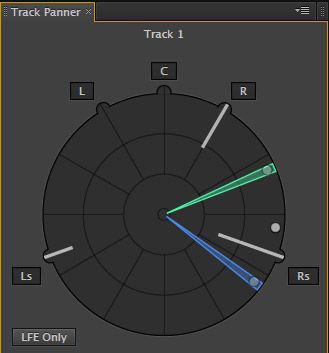 Click the gold dot under the letter “C” – or anywhere inside the track panner – and drag the green and blue wedges around the circle and listen as the audio smoothly pans from one speaker to another. When the gold dot is close to the edge, the sound is isolated to a specific region. This is called a “focused” sound.

If you only want the sound to come from specific speakers, click any of the L – C – R – Ls – Rs buttons to enable or disable that speaker for that track. (Remember, surround mixing is track-based.)

As you drag, white lines from each speaker change in length, illustrating the power of the signal for each speaker for that track. In the background, green and purple areas reflect the placement of the left and right stereo image; blue areas indicate where the image overlaps.

Under the surround plot are the following options: 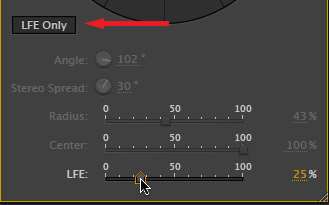 Click the LFE button and the bottom slider lights up, allowing you to determine how much, if any, of the sound of the track goes to the subwoofer. (LFE stands for “Low Frequency Effects.” We all just call it the subwoofer.)

NOTE: Since subwoofer generates serious power in very deep frequencies, you should generally set levels much lower than your front speaker.

In surround mode, the six bars of the Audio Meters measure the absolute audio levels of, from left to right: Left Front, Right Front, Center, Subwoofer, Left Rear, and Right Rear channels. In this screen shot, the dominant sound is coming from the Left front and Left rear speakers.

You can also use keyframes to set levels for surround mixes the same as a stereo track.