How Not to Do a Live Stream – the BoxCaster Pro Launch

Creating high-quality live video is not easy. Boxcast illustrated many of these challenges in their live-streamed announcement earlier today of the new Boxcaster Pro.

The Boxcaster Pro product is exciting. But, engineers should not design live television. 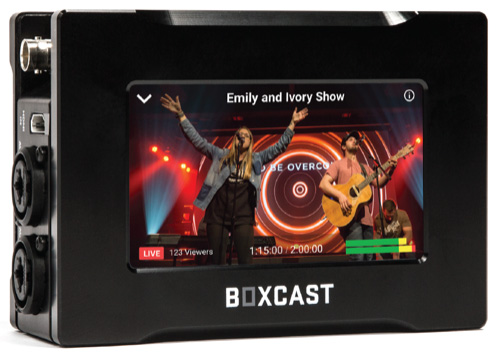 Boxcast is a respected company, founded in 2013, that makes good products. Their new BoxCaster Pro looks to be a solid all-in-one device that handles all the work necessary to take images from a camera or video switcher and audio mixing console, encode it into a high-quality, highly-compressed stream (using HEVC) and send it from your location up to the web for the world to watch live.

With an introductory prices of $1,999 (US), the BoxCaster Pro can ingest video of any resolution from SD to 4K/60 and can stream up to 1080p/60. HEVC encoding allows users to stream events live without requiring large amounts of network bandwidth. The BoxCaster Pro has professional inputs and outputs, including HDMI, 12G SDI and balanced audio from 2 XLR and 1/4″ inputs. Its 4.3″ LCD touchscreen allows broadcasters to easily see a live video preview, along with video inputs, audio levels, and network information.

Boxcaster Pro, as a product,  seems impressive. But the production they created to announce it was a poster child of what not to do to launch a product.

Let’s walk through what broke. 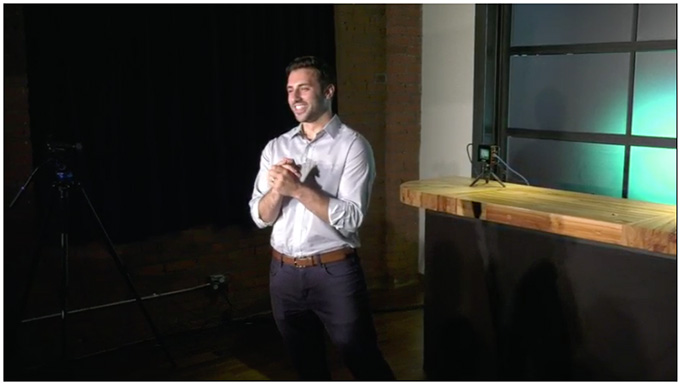 (This was the opening shot. He’s the VP of Marketing. Name…? Unknown.)

Three people spoke during the event. The VP of Marketing, the CEO and the Product Manager. I’d tell you their names, but I have no idea who these people are; there were no titles and the introductions were mumbled.

The live stream opened with a video of Cleveland, with lots of shots of a specific building. What was the building? No clue.

Then, the VP of Marketing wandered on stage to start this highly promoted, world-wide live stream announcing the most significant product in Boxcast history. How? By talking about why LeBron James needs to stay in Cleveland. (The next day, LeBron James decided it was time to leave.)

What’s the relationship between LeBron James and Boxcast? No clue. Why was this the best possible opening to this presentation? Did no one think of writing a script – at least for the open? 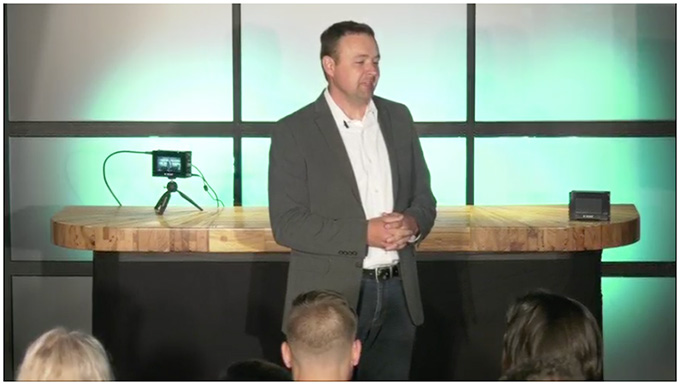 (This is everything we know about the audience.)

At the open, there were wild cheers from the audience, which we never saw, except for the backs of three heads from the center camera in the back. Why have a live audience if we don’t see them, or explain where we are, or even whether these are Boxcast employees?

NOTE: Did the director use the audience for reaction shots to emphasize key product points? No.

No titles, no graphics, no locators, in fact, the VP’s entire presentation rambled, a lot. Apparently, the main reason the VP of Marketing was there was to introduce the CEO. Whom I don’t know and still can’t tell you his name. 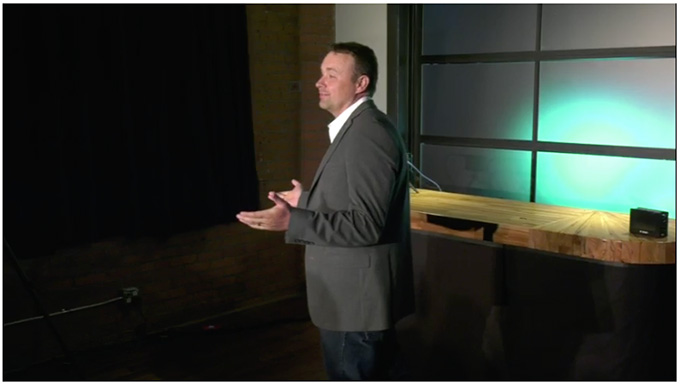 (This is the CEO. Note the set and the lighting.)

At least, I assume he was the CEO. Again, no titles, no graphics. Remember, this was a major presentation, hyped to the world. It would be nice to know who these people are.

This trend of having people who were not identified continued through the entire presentation, which lasted for 35 minutes. 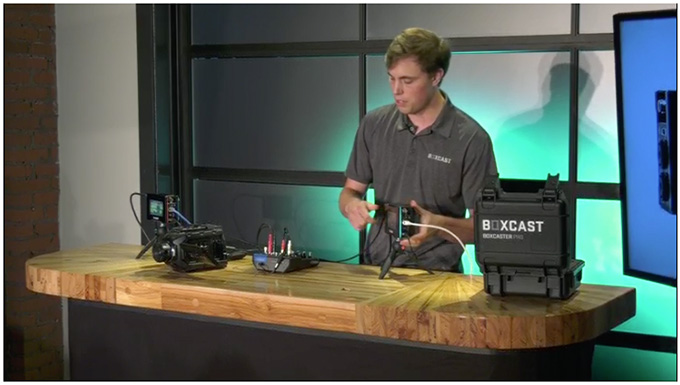 (Note the monitor with graphics on the right. The live audience saw this, the online audience did not. This was also, apparently, used as the prompter because the speakers kept looking at it.)

I don’t know what they were using for prompter, but it was not through-the-lens and every presenter kept looking off-camera right at something, though we the audience never saw what it was, until the director, by mistake, included part of a monitor in the shot – they were using Keynote/PowerPoint slides for their notes. 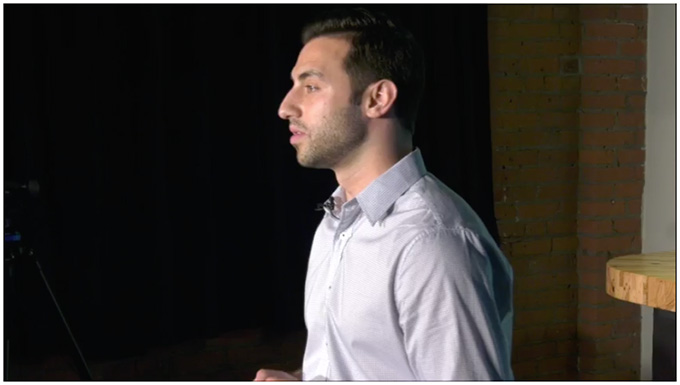 Really, people, prompters are not that expensive to rent. 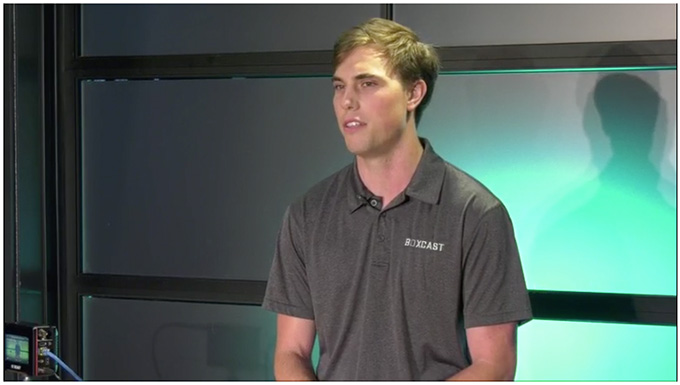 (The lav mic is clipped to his collar. Also note his shadows on the set – all at eye level.)

All three speakers were wearing lav mics, but the audio sounded like it was being picked up from a boom mic in the back of the room. Levels were soft, somewhat echoey, and thin.

Sigh…. one of these days, producers will realize that audio is at least as important as picture and budget for it. Not this time, though. 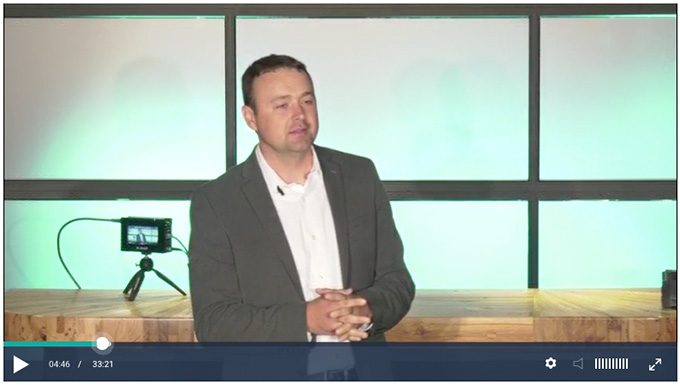 (Note the camera focus, background, lighting, exposure, and, gosh, everything.)

The set was about a 10×10 space, scrunched into a corner and all lighting seemed to be at eye level directly in front of the talent, while the backlight was positioned almost overhead. Presenters did not appear to wear makeup and appeared blinded by the lights; hot spots were everywhere and multiple shadows fell on the set.

Lighting was uneven on the talent, the set and the product.

The background was a grid of panels lit light green. If there is a worse color for caucasian skin, I haven’t found it. Worse, the demo table was about 3 feet in front of the set so that the presenter cast shadows on the back wall of the set.

Of all the nice buildings and locations in Cleveland, why did they pick this corner of a closet?

The main center camera, which provided central coverage, was out of focus and over-exposed. I can understand this being a problem at the beginning if the talent didn’t hit their marks, but it was never corrected during the show.

Boxcast made a big point of the new Boxcaster Pro allowing you to monitor your image using the 4″ monitor on the back of the device. BUT, that assumes someone is actually LOOKING at it.

There were three cameras in the production: left, center and right. The director would insist on cutting to the right-side camera in the middle of sentences, even though the presenters were never looking at it. 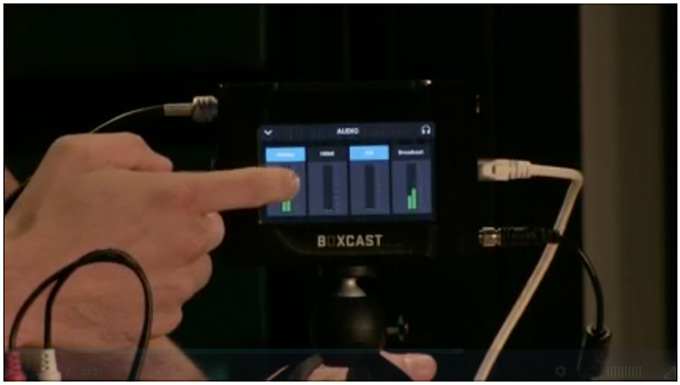 (This is the demo closeup. Note the focus.)

Worse, when they went to the product demo itself, it seemed to catch the director by surprise, because they did not have a closeup camera ready to showcase the new product when the demo called for a close up. And, when the closeup occurred, it was out of focus.

By the way, from the applause, we know they had a live audience. But we never saw them. Not once, even at the beginning. They could have opened up this set tremendously by getting rid of the audience and move the presenters out of the corner and into the room. 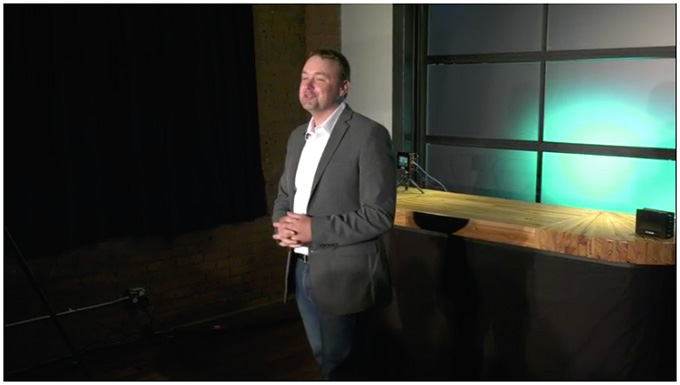 (Even a professional actor could not make this environment look good.)

Here’s Boxcast, launching a major new product in today’s media world. Without on-set graphics, without illustrations, and without titles – in a set crammed into a corner of a tiny space in Cleveland.

Even professional actors would have a hard time pulling this off.

Why am I making such a big deal of this? Because I’m tired of companies that make hardware saying: “Look how easy it is to create professional-quality productions with our gear!” And then fail to create a professional presentation to support the announcement.

Live video isn’t easy. And this Boxcast launch was a text-book case of how to screw it up.

The problem Boxcast ran into is the same problem a lot of new producers run into. They are so excited about the concept of “doing it live,” that they don’t think through how the finished production will look. Live television isn’t easy. It is technically challenging with no room for mistakes.

This live production could have been done better by most high schools in America. Which is a shame, because Boxcast’s products deserve better than this.

NOTE: Here’s a link to the live cast, if you want to watch it for yourself.