“Deadpool” Edited with Adobe Premiere [u]

[ Updated Feb. 17, 2016, with comments from Adobe clarifying how Adobe Premiere is used by multiple editors.]

For years, Avid has had a lock on editing major feature films in Hollywood, but, starting with “Gone Girl,” Adobe Premiere has been making in-roads. Their latest success is “Deadpool,” which opened yesterday. 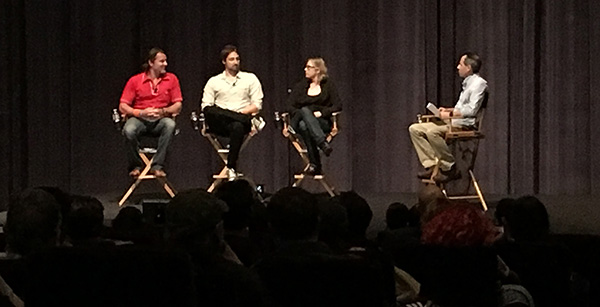 (From left to right: Vashi, Matt, Joan, and Mike)

Today, Adobe hosted a special screening for about 300 invited guests on the Fox Studio lot, followed by a discussion with three members of the editorial team:

Julian Clarke was film’s editor, though he was not able to attend today’s session.

I’ve never edited a feature film, so I always find discussions about the process fascinating. Here are some of my takeaways after listening to their talk.

Joan’s role is similar to a line producer during production – keep all the moving parts moving, on budget and heading in the same direction. Matt’s role was media wrangling and management. And Vashi is an editor with nine feature films to his credit who was brought in to help train the editorial team in Premiere.

What I found interesting was that while Vashi’s background was Final Cut Pro 7, Matt’s was Avid. It was interesting listening to how their different backgrounds influenced what they liked and didn’t like about Premiere.

NOTE: Adobe provided technical and engineering support to the film during editing. However, unlike “Gone Girl,” “Deadpool” essentially used the current version of Premiere.

A feature in FCP 7 and Premiere that doesn’t exist in Avid or FCP X is the ability to stack two open timelines above each other; a feature Vashi calls “pancaking.” This makes it easy to quickly move clips from a selects reel or rough cut in the timeline above into a second sequence below.

While Avid provides built-in databases for tracking media, Premiere doesn’t. In fact, media management in Premiere is a weak spot. So, Matt told me that they organized media in folders in the Finder – the edit was Mac-based – prior to importing. While I didn’t grasp their complete organizational structure, it sounded like they grouped clips by the day it was shot, more than by specific scenes.

NOTE: Another interesting comment was that the editorial team burned out about ten Mac Pros during editing. Apparently, the D700 graphics chip could not handle the load. All media was stored on an external SSD system holding about 180 TB.

It was also interesting that they didn’t mention using any specific media management software.

The film was shot on a variety of formats: Arri Alexa 3.5K, Red 5K, Red 6K, Phantom 2K, Phantom 4K, and several DSLR formats. To simplify editing, all camera masters were transcoded to a ProRes 422 2K “container” which allowed for reframing as well as a more organized media flow.

They also created an HDR version, which will be released in the future. Matt was blown away by how good a 4K / HDR finished master looked. And, yes, the latest version of Premiere supports HDR and, something I didn’t know, also provides video scopes optimized for HDR.

There were more than 1,200 VFX shots in the film, with a ten-month edit schedule. So Joan was kept very busy getting the effects done in time. Her favorite shot is the opening credits. It was the very first shot sent out to a VFX house in the film and the last shot to come back. Once you see it, you’ll understand why.

The opening for the film is unlike anything I’ve ever seen before – it is entirely CGI – including the text for the credits. I won’t spoil the fun by giving it away, but I can only imagine the fits the director had in getting the legal department to approve the text. What struck me was that those opening titles give you an idea of how far CGI technology has come in just a few years. 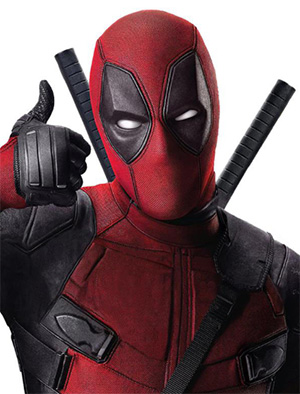 Much of the film – maybe 500 shots – were green screen. So, a  feature Matt liked a lot was the ability to quickly shift an effects shot from Premiere into After Effects and back. While the finished effect would be done by a VFX house, the ability for editorial to do a quick test to see if an idea worked saved a great amount of time.

As an aside, Matt told me the entire editorial team was excited about the fact the lead character wears a mask. They thought this would vastly simplify ADR on the movie; until the decision was made, part-way into production, to animate Deadpool’s mouth so that the mask would move as he talked. At which point, ADR became as hard a problem as it would be for any other film. (A classic example of the Law of Unintended Consequences.)

Avid supports multiple editors working in the same project at the same time. Premiere does not. But the team developed an interesting work-around, based on a new feature that was added to Premiere during the “Gone Girl” edit. While Premiere will only open one project at a time, the Media Browser allows any editor to browse and import sequences from any other Premiere project in “read-only” mode.

What this meant in more practical terms was that when Julian finished cutting a scene, the assistant editors could open a copy of that sequence in their system – they had six edit bays going during this movie – and continue working with it to clean up audio, add effects, or other editing tasks that could be turfed over to the assistants. This allowed everyone to have access to everything, without the risk that an over-enthusiastic assistant would accidentally destroy the main edit.

CLARIFICATION: [The Adobe team, after reading my write-up sent the following.] We wanted to clarify one point about supporting multiple editors in the same project simultaneously. No NLE lets multiple users work on the same project without management software like Adobe Anywhere, Avid Interplay or Final Cut Server. In this instance, the feature used by the “Gone Girl” and “Deadpool” teams allows users to open multiple projects simultaneously. The Media Browser can be used to browse other projects, which, in the case of big productions like “Deadpool,” will likely be those of another editor. You can browse them in a ‘read only’ state, and bring assets in to your own project if you need to.

In TV and documentaries, audio mixing is one of the last steps in the editorial process, after picture is locked. Not in the case of “Deadpool,” or, Matt tells me, other feature films.

Instead, once Julian had a fairly finished cut, they began showing previews of the movie – more than seven different versions in all. At one point, Matt said that they were editing a new preview version every two weeks, which meant revising the edit, all available effects and adding a complete new sound mix every two weeks.

It was an interesting discussion about an interesting film. While I am not a fan of ultra-violent films, I am a fan of the team that put it together and I wanted to share some of what I learned from them with you.