I’ve been thinking a lot about VR (Virtual Reality) recently and I’ve discovered my opinion is changing.

Last week, the Digital Production Buzz devoted its whole show to VR. We looked at what it is, how people are using it to tell stories, tools that are available for it, and how developers are enhancing it.

The lead-off interview was Michael Wohl. Recently, he wrote a  book on VR: “The 360 Video Handbook”  His interview was a truly fascinating conversation about what he learned about VR while writing the book.

It was this interview with Michael that prompted this blog.

NOTE: Here’s the link to the show. Michael is excellent and the entire show is worth listening to, especially Chris Bobotis, from Adobe, at the end.

When VR first appeared, I equated it to then-hot stereo-3D video. Stereo-3D has a place, but, frankly, films can be enjoyed whether they are in 3D or not. I lumped VR into that same category.

But, I began to discover that VR is more than 3D.

What VR does is put you in the center of a sphere where you can look in any direction you want. Unlike VR for games, where the action is designed for you to move around within the space, 360VR makes you the ultimate observer.

The problem, as I saw it, was that traditional story-telling required controlling what the audience sees and hears in order to maximize the drama and emotion in any scene. When you can’t control where the audience looks, how can you control the story?

At which point, my thinking split into two parallel paths: I decided that VR was designed to provide experiences, or that VR is like traditional theater-in-the-round, where the action occurs live, from multiple actors, all moving about on stage at the same time while the audience watches the action.

Worse, VR is an audience of one – you – so you don’t get the emotional reinforcement of hearing and seeing other members of the audience react to the same things you are seeing and hearing.

While live theater is closer to describing what VR is, it still isn’t close enough.

The secret, I think, is in the word “experience,” but not in the way I was originally thinking. A better word is “immersive,” as in: “to place you in the middle of something.”

Here, comments from Chris Bobotis, Director of Immersive, at Adobe Systems were helpful. During his interview, Chris said: “I’ve always been hard pressed to answer this [question “What is VR?”] until about maybe about four or five months ago when somebody stuck a microphone in my face…. And I said, “To me it feels a lot more like dreaming than it does cinema or theater.” I don’t dream in a frame. I don’t know about you, but I would guess most people don’t. They don’t frame their dreams, nor are they really linear. A lot of them are abstracted, non-linear and yet we’re OK with that. We live in a dream, experience dreams and we’re very OK with that.”

I realized that my perspective was trying to force VR to tell traditional stories. I’ve been told that it can, but, in fact, it is much better at doing something different: giving us the ability to experience something new, and discover stories in new ways.

As Michele Yamazaki, VP of Marketing for Toolfarm, said: [VR is] “used in such a huge number of positive ways. It’s been used to treat medical disorders like PTSD, to help cancer patients, to help cure disease with researchers being able to use VR to learn about cellular structures and the immune system. It can be used to diagnose dementia or help children with autism. Outside of that it can be used in training. Wal-Mart I know is using it to train new employees, they’re using it to train police officers, new teachers, the Chicago Bears quarterbacks are even using VR.”

Andy Marken, President of Marken Communications shared a chart from the recently concluded VR OTL (On The Lot) conference in Hollywood. “There, Roy Taylor, corporate vice president/ww head of media and entertainment for AMD, discussed the global innovations that have taken place in VR shooting and production this year and outlined the new solutions filmmakers can expect in the next year as narrative, entertainment and educational/informational VR become mainstream. 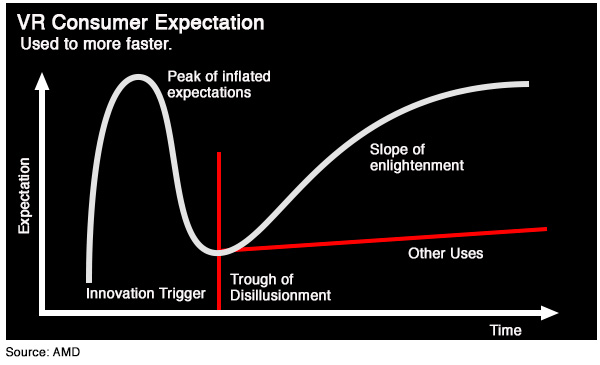 “For those of us not waist deep in working with the technology, one of the best charts was his modified Gartner hype cycle, showing we’re past all the wild-eyed expectations and deep-dive disappointment and now the real work is being done.”

Stories are being told, but, more importantly, the role of VR has expanded way past story-telling. As Lewis Smithingham, of 30ninjas, said: [story-telling doesn’t go away, instead, we need to] “use what Nick Bicanic calls ‘the arc of attention’ to determine where the viewer is likely to look and how to use subtle, unobtrusive techniques to guide the viewer.” In other words, we need a new production and acting language to describe how to guide the point-of-view of the audience.

Andy Marken, again: “Blending a combination of real space footage and animation, Andrew Shulkind and Greg Shamitoff allow VR HMD wearers to experience first-hand what it is like to weave your way through an asteroid field, complete with all of the mishaps and successes. They and their team used real footage and information from a shared international resources of global space data to deliver the virtual experience.

“Chamitoff, Shulkind and their team are developing SpaceCRAFT to not only make it fun to explore the outer reaches; but, more importantly, be a very practical incubator to test ideas, virtual products and environments without spending billions of dollars.

“’In the virtual environment, we’ll be able to move around and explore the planets and beyond using real information from a shared international resource of global space data,’ said Shulkind. ‘This enables us to economically find out what works and what doesn’t–and without risking human life. It’s a great tool that will help us explore what is out there and it’s a lot of fun for people who want to keep their feet on the ground.'”

I asked Michael Wohl what one core piece of advice he would give filmmakers who want to get into VR for the first time, to get them started in the right direction?

“This is maybe an easy answer or a cliché answer,” he replied, “but the best thing you can do is to get a cheap camera like a Ricoh Theta, or the Samsung 360. These are decent quality cameras, very lightweight and easy to work with, and will allow you to experiment and play, because the one thing I would say is that, you’re going to make a lot of mistakes.

“There are a lot of ways, especially for experienced filmmakers, that your instincts are going to be wrong. What I would say is, don’t do the project you’re passionate about first. Do a bunch of experimentation, do a bunch of testing, play with it, and then see the results and watch those results in a headset, because you will experience the scene in a very different way than most people I think expect to.”

WHERE I STAND NOW

I realized that my thinking was too narrow, that VR is more than traditional story-telling. It mixes a fascinating combination of live theater with traditional post-production and allows the audience to explore larger worlds than a simple narrative story.

VR won’t replace traditional film or video, but it does give us a new tool to tell new stories in new ways. For people new to the industry, VR can be fun to experiment with. For those of us with deeply-developed skill sets, there is a LOT to unlearn in order to be comfortable with this new technology.

On the other hand, if we were actually risk-averse, we would never have gotten into media in the first place.

Cameras are inexpensive and it doesn’t take a lot to get a few friends together to shoot a 30-second experiment. As Lewis Smithingham, of 30ninjas, said at the VR OTL conference: “There isn’t a studio or channel that isn’t pushing the really good Indie filmmakers to deliver content to attract an increasingly VR-educated audience.”

It’s creative. It’s new. And there’s money to be made. Sounds like an opportunity for the rest of us.

4 Responses to Changing My Thinking on Virtual Reality (VR)