Ad Blockers Are Just a Symptom of Bad Marketing

Andy Marken, head of Marken Communications, recently send me the following commentary on the new trend for ad-blocking software.

Some interesting ideas here designed to give us something to think about. (I made a few small edits for clarity.)

Kids can be such a pain:

To help him on his quest for straight-from-the-source information/entertainment, people developed the ad blocker app, promising that life is going to be great. Or, it’s doomed if you’re the advertiser/delivery mechanism rather than the target.

Wrong, on so many levels.

First, look up the complete definition on Wikipedia.

Second, someone has to be paid to prepare that information and produce/perform your entertainment.

People don’t hate ads (and they are influenced by them) but:

They don’t hate ads. They hate tons of mediocre crap!

Print always had a somewhat unwritten rule of 60/40 news vs. ads. That shrunk along with the size/thickness of the publications.

TV figured a one-hour show could support about 22 minutes of commercials and promotional announcements sandwiched into 44 minutes of content. That gave everyone time for a refreshing/refreshment break.

Mobile reading/viewing meant you take it with you; and when you dropped it, you bought a new one rather than drying/using it ever again.

Ad blocking and the demise of content providers are as old as black and white TV. Zenith introduced their laser gun that did something and ad folks were sure they were dead.

TiVo came along and it was the ad skipper, show keeper of the ages. Roughly one million were sold and probably 10 million shows are still on them … along with the ads. As for their new “breakthrough?” Whooppee!

Lots of folks have downloaded ad blockers but ad blockers, skippers for video and content are so yesterday. 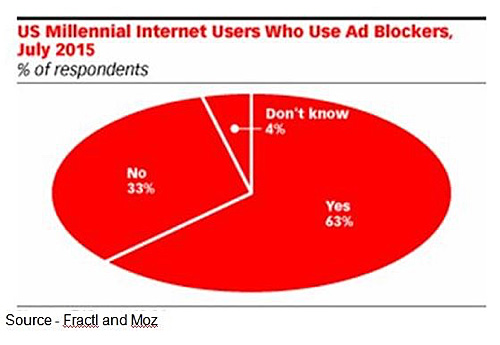 Got ‘Em, But – Millions have downloaded ad blockers but the number of heavy users is still seriously in question, especially when users find that the blockers also block some of the meaningful content and don’t have much effect if you go to specific web sites. Big sites that are used to big pop-ups and drop-downs do have problems, but they can be “whitelisted” if you really want to/need to go there. But people who put the user/viewer first, rather than ad pumpers, could be collateral damage.

A recent Nielsen report found that the global level of trust/interest in ads among millennials (the target audience for blockers/skippers) has remained high with 63 percent of the folks saying they trust TV ads somewhat or completely. 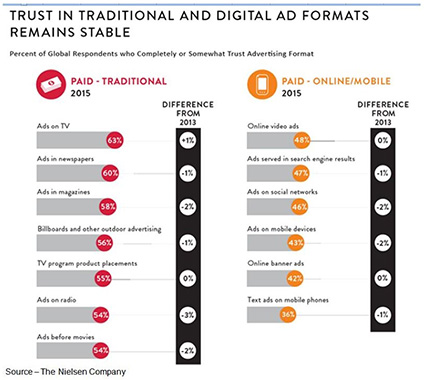 Find Them Useful – Most people continue to find good ads are interesting, informative and valuable. However, people take issue with the overwhelming volume, lack of pertinence and poor quality of the ads. Earning consumer trust is the measure of any ad.

Nielsen’s conclusion was that people block ads because they are annoying or distracting. The right ads, the survey suggests, can still cut through the clutter to deliver effective messages.

“There isn’t one simple rule for maximizing advertising effectiveness in such a saturated market,” notes the report.

The market is partially saturated because we have a big rush for more and more visual content. According to FX Research, there are more than 400 original TV shows in production this year, up from 213 five years ago.

Block the ads and you mess up the publishers’ business model and you lose access to diverse content.

The Interactive Advertising Bureau (IAB) likes to point out that without economic support, indie publishers and local outlets will cease to exist and you’ll be left with the power engines of commerce – Google, Amazon, Facebook and others – because they’ll use the old switch/carrot routine to get folks back into the fold.

However, if you’re a kid and live on your smartphone, then there is a benefit to an ad blocker– primarily because the pipe provider and advertisers don’t care about the recipient but in selling you more on-air time and making splashy, bloated ads. 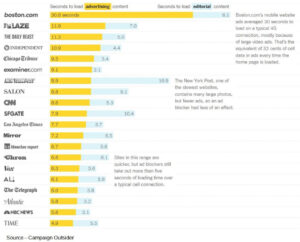 Your carrier loves it when you download the big ads because they can bill you more. Yes, you paid to download their ad. More importantly, it wasted your time and sucked up your device’s battery.

Of course, the ad blocker can cause the website to load erratically, according to a test by writers at the The New York Times. Missing pieces of content and broken shopping carts aren’t the fault of the site owner; they’re the fault of your blocker. Disable it and the problem is solved. You can shop ‘til your heart’s content!

According to a poll by Fractl and Moz , people want the ads – when their very personalized. 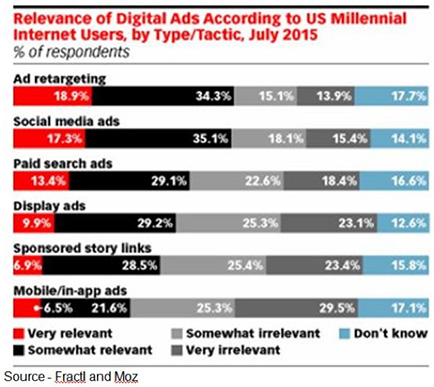 Relevance is Key – With all of the personal data that is gathered, it is becoming easier and easier to deliver very personalized ads to individuals on a specific device platform, in the right format and at the right time (when the information is most meaningful). The result is improved consumer satisfaction and it’s getting better.

Folks said ads were a good way to reach them but free content (which is free because it’s ad supported) was much better. Add discounts, free trials, personalized offers and they’re so there!

After all, the smartphone is their connection to their social world. Ad blockers are serving a purpose. They hover like big thunder clouds over web sites that can zap them if they don’t eliminate the clutter of hundreds of ads or don’t put restrictions on sloppy, bad, data-intensive ads.

What a revolutionary idea – make your ads really creative with the consumers’ experience in mind so they can be informed/entertained and will watch your ad. And who knows, maybe buy something.

Dean Murphy has been quoted as saying he wasn’t against ads when he developed his ad-blocker “Crystal.” He just wanted a better experience and better system performance.

People who simply don’t want to take advantage of the free content have a choice — pay for the content by signing up with Netflix, Amazon, The Wall Street Journal, New York Times, Financial Times, Economist and hundreds of others.

People like me, who actually like ads (as long as they’re done well), can narrow their focus and use those sites that deliver the right ad to exactly the right household/individual and push back on marketing folks to do stuff that actually works for the consumer – even if it means giving him/her time to take a refreshing/refreshment break.

The mediocrity and ad clutter that is becoming overwhelming online can’t go on.

Even our kids know that.

Basically reining in the volume of ads to give a more sensible balance to the web for content and business.  They see the writing on the wall.  If they don’t folks will head for Amazon, Netflix, YouTube and other closed environments that will let people pay for their stuff rather than have to wade through the ads or block ’em.

Of course it only works if programmatic ad deliverers, search engine folks, pipe/service providers can figure out a way to get more money for less invasion and advertisers figure out how to make better, more interesting, more informative ads.

Well at least they’ve figured out who the enemy is.