Workflow: How the Digital Production Buzz Covered the 2019 NAB Show [u]

[ Updated April 19, 2019, with audio information based on what we actually did at the show itself. ]

Next week, for the eleventh year in a row, the Digital Production Buzz travels to the annual NAB Show to podcast live from the trade show floor. This year, we are producing twenty-seven 45-minute shows in three-and-a-half days. Doing live webcasts means we need to focus on workflow, automation and a GREAT team. There are ten folks behind the scenes to make these shows happen.

We are doing several things new this year, and I thought you’d like a trip behind-the-scenes. 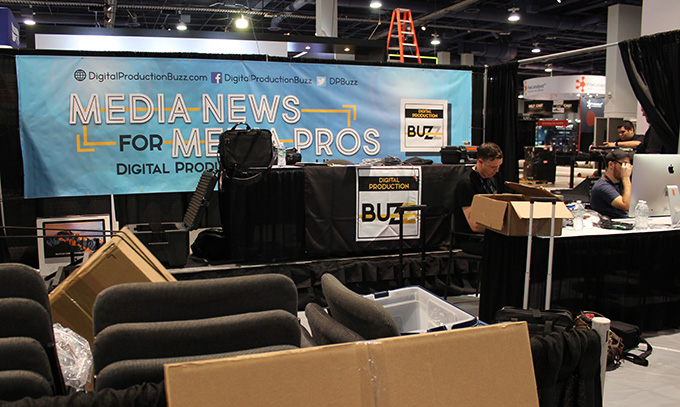 (Here’s what setup looked like last year, the day before the NAB show opened.)

This year, we are connecting all our audio gear via Dante, which is a popular version of Audio over IP (AoIP). This means that, rather than running audio cables everywhere, we connect all computers and mixers into a single data switch, which then routes audio and network signals to all devices.

We do this using the Dante Virtual Soundcard from Audinate (audinate.com). This turns each Mac into an audio workstation.

ADUIO UPDATE: We discovered that Dante would not work to connect all our devices. So we just used it to record a multi-channel master of the show. Streaming was via traditional analog audio converted using a FocusRite Scarlet 2i2 converter.  The FocusRite worked great!

When I took over the Buzz in 2007 from Philip Hodgetts, the best advice he gave me was to create a “show bed.” This is an audio file containing all opens, closes, music and commercials, all timed and built into a single audio file.

I’ve done this for every show since and it makes very complex shows much easier to do. Over the years, I added a visual countdown clock so that each segment counts me down to when it needs to end.

This media file is built a few days before we travel to Las Vegas, then imported into a special template in Adobe Audition for on-air playback. 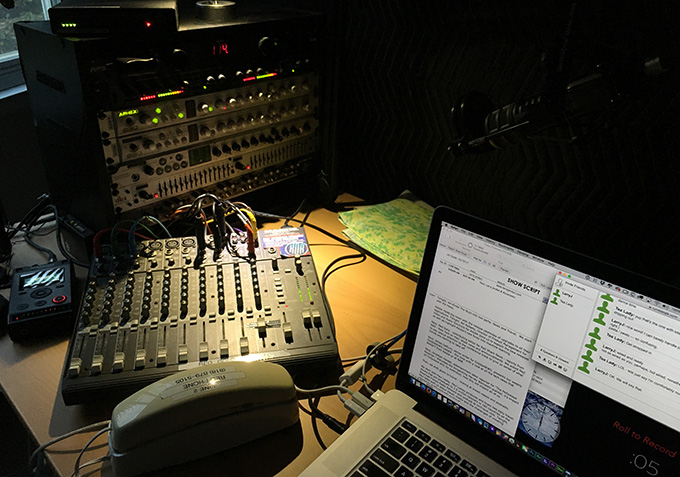 This is the studio I use for the weekly Buzz. Taken during a live broadcast, the script, chat, and countdown clock are visible on the laptop screen. I moved the mic out of the way to show the rest of the gear. 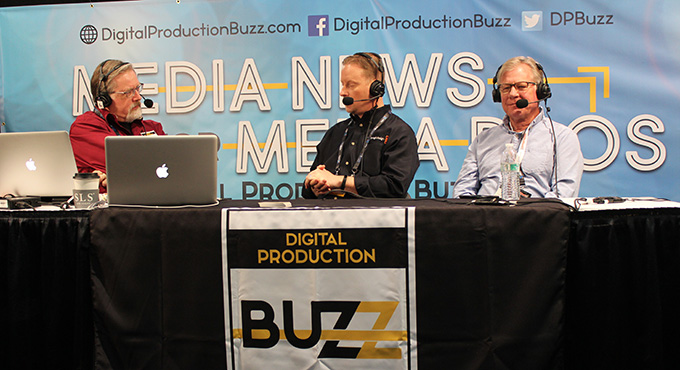 (Larry Jordan, Dan May with Blackmagic Design, and Mike Horton, with SuperMeet, in 2018.)

Each show features four guests, each seated at a table on the main stage. Each of us wears a Sennheiser HMD-26 headset. 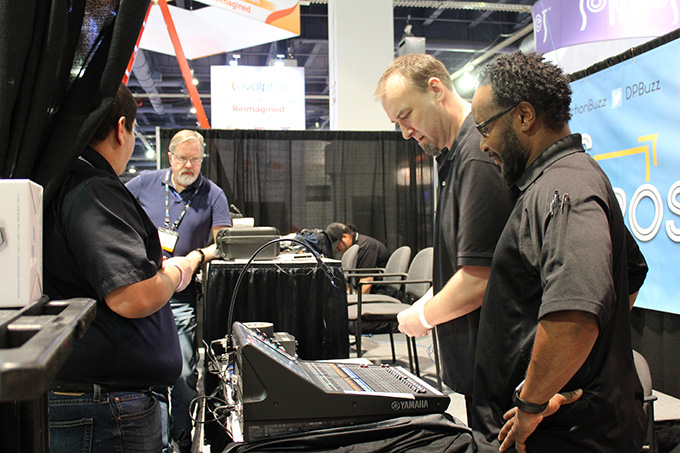 (Audio system during setup in 2018. Our audio engineer, Leonard Fassler, is second-from-right.) 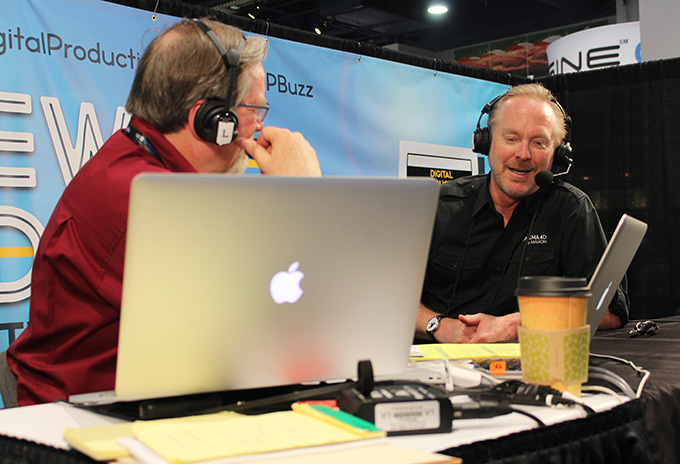 At the same time, I’m playing the show bed from a MacBook Pro on the stage, running Adobe Audition – so that I can see the countdown clock – while simultaneously recording five mics into the same Audition session. Dante is what makes this possible.

AUDIO UPDATE: The new Punch-and-Roll feature in Audition, which appeared five days before this NAB, was invaluable in that I could start the preshow playback, then enter record for the four mic tracks when there were only two minutes left till air time. This saved a ton of disk space.

All told, we created about 300 GB of audio files during the show.

This means that all mics will be recorded to separate channels, in sync with the show bed, along with a separate Shure SM-81 mic that’s capturing general room tone.

AUDIO UPDATE: I was concerned that my 2013 MacBook Pro would not have the horsepower to simultaneously playback and record these shows, over the heavy workload of the four days. Instead, it worked flawlessly. This reassured me that, sometimes, we worry too much about CPU speed. 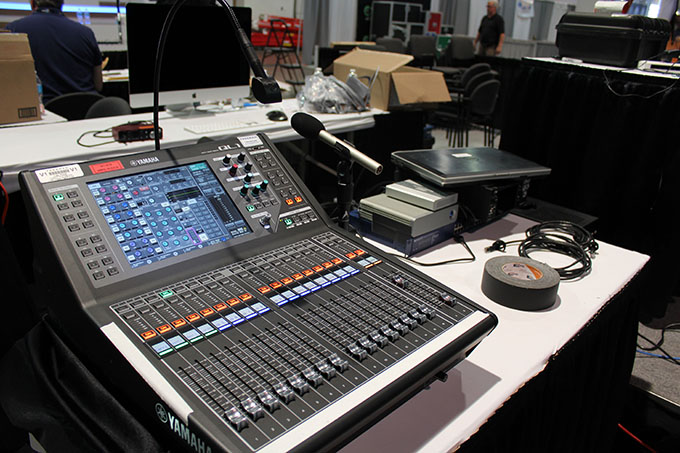 At the same time as I’m recording the live show, the Yamaha is creating a show mix that is streaming live via NABShowBuzz.com. About 40% of the audience listens to the live stream, while the rest download the shows after the fact.

In producing this year’s set of shows, we actually created six different audio mixes for each presentation. This is one of the reasons we went with a highly-flexible digital console – it gave us all the mixed outputs we needed. (Up to a max of 16, I think.)

Here are the mixes that we created for each show:

Once we figured out who needed to hear what, this all worked great.

The audio engineer also recorded a backup of each show to a Sound Devices recorder, which we never needed – except once, when I forgot to press Record at the start of a show. The edit between the backup and the main recording was inaudible. (Yay! for backups.) 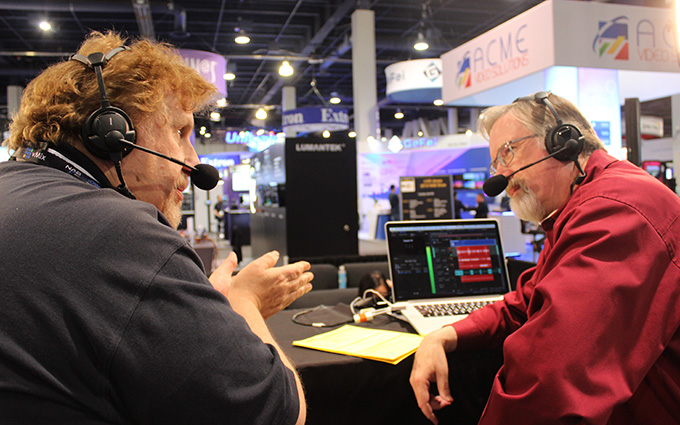 (Here’s a view from the stage from the 2019 show. I’m interviewing James DeRuvo, who is on the left. You can see my laptop recording the show on my right. Photo credit: Taylor DeRuvo.) 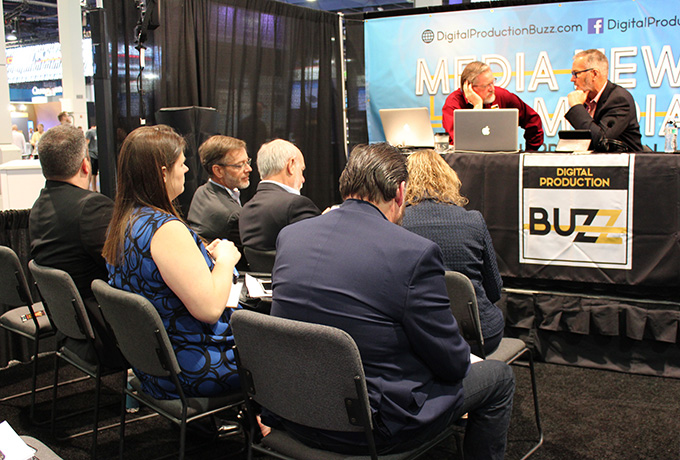 NOTE: We are also feeding a live mix to Bose L1 Compact Line Array PA speakers in the booth for people who want to watch and listen to the show while sitting down.

We stream the show using Mixlr (mixlr.com), which we also use for our weekly shows. The stream appears on the Digital Production Buzz website. 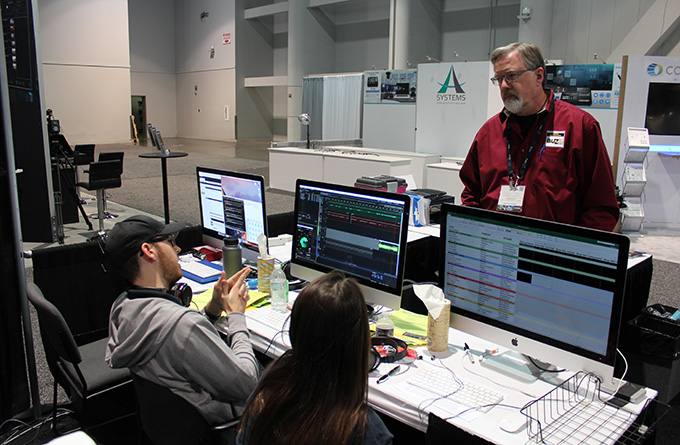 (Computers L to R: Streaming, editing (Trevor Horton), and traffic (Paulina Borowski). This year, we rotated the stage 180° so that we looked into the entire south lower hall. It made all our shows MUCH more exciting.)

We have eight minutes between shows. Once a show is complete, the finished session recording is transferred to a file server running on an iMac. Because the network is simple and small, we are using Personal File Sharing, which is built into the macOS. Computers are connected via wired gigabit Ethernet.

UPDATE: The iMac worked great as a file server for our eight computers. We also used the same iMac for posting all shows to the web.

From there, our audio editor grabs the session file and cleans up any mistakes, resets levels and outputs a finished mono mix for posting to iTunes.

NOTE: Because these are talk shows, we export them as WAV, 44.1 kHz sample rate, 16-bit depth, mono. This provides CD-quality sound while keeping file sizes small. 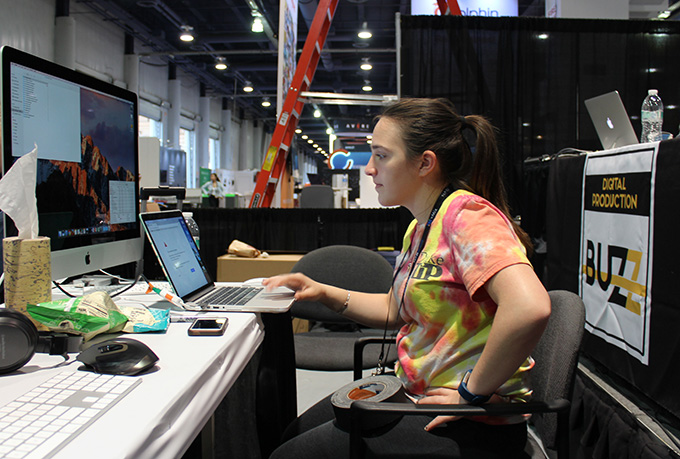 When a show is complete, we use the multi-export options in Audition to export:

Next, our audio editor creates a separate interview file for each guest, complete with on-site open and close to post to the Buzz website and their social media.

When the exports are complete, our compressionist opens each file and verifies that levels meet spec and that there were no problems with the export.

NOTE: All files are required to have a LUFS setting between -16 and -17 LKFS, peaks below -1.5 dB and 0 distorted samples.

She then drops the audio files into a Watch Folder stored on the server that connects to Adobe Media Encoder running on a separate iMac. 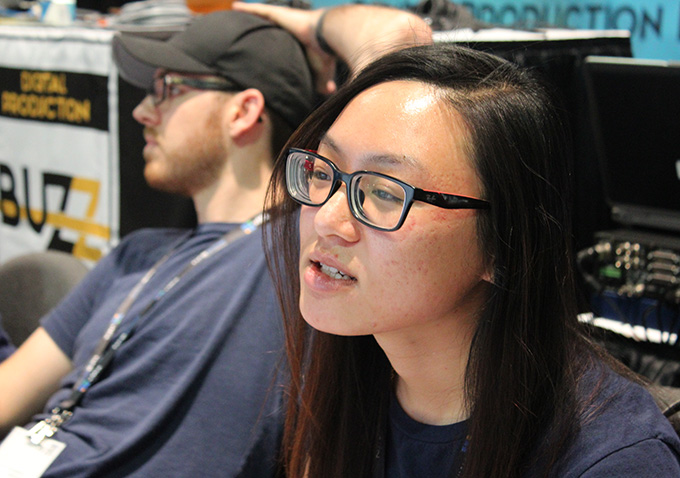 When everything is posted, social media takes over to generate an audience and promote that the shows are available.

Our traffic manager supervises the entire process to make sure no files get lost. It always amazes me how many files are created in such a short time. These shows are audio only, yet last year we created 2,911 files requiring more than 300 GB in three days.

It is a great team and, while it requires a lot of work, it is also enormous fun. 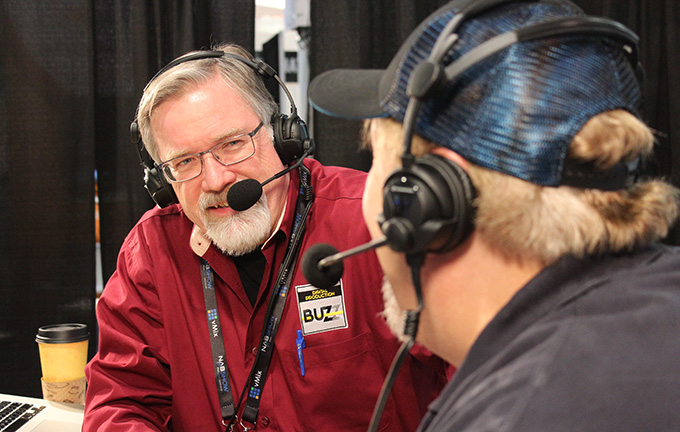 I encourage you to listen in and share your comments. Our coverage this year starts Monday, April 8 at 11:00 AM, and every hour on the hour thereafter. Here’s the link: NABShowBuzz.com