Why LUFS and LKFS are Essential to Video

Tom Thornton recently wrote, saying: “I am getting a surprising number of readers of my blog of last Oct on my experience with LUFS metering. About 1100 readers to date. Since I don’t have a ‘fan base’ this topic must have greater [relevance] to the Post community. I thought you may find it a suitable topic to revisit.”

NOTE: Here’s an article that explains this in more detail with illustrations.

Peaks are good for showing transients, but averages are a much better way to determine whether a clip is loud or soft. It is also the best way to make sure two programs that run back to back sound at the same level.

Current loudness standards are based on a document called: “ITU-R BS.1770-4”. It was written by the International Telecommunications Union and Europe, Japan and the US have all created standards that are closely modeled after this document. (In the US, the standard is called: “ATSC A/85”.)

AskAudio had a nice article debunking several audio myths. One answer they had that is relevant to our discussion today stated:

“Peak metering is rapidly becoming unnecessary, and essentially never gave us useful information to begin with. Intersample peaks are not correctly registered by peak-sample meters. For example, a traditional sample-peak meter that displays a max of -0.2 dB could read as high as +3 dB on a true-peak meter.

“…As of this writing [April 17, 2016] Logic X 10.2.2 has integrated True Peak measuring into all of its native meters and it is highly recommended to use true peak measurements from here on out.

“As for RMS — RMS is much more useful for gauging the actual, longer term, levels of a given waveform, but RMS is only a measurement (or display) of signal voltage, so it doesn’t really give us an idea of perceived loudness. Two music tracks measuring the same RMS values may not necessarily have the same perceived loudness because RMS does not take into account the psychoacoustic nature of apparent loudness as heard by the human ear, specifically that low, mid and high frequencies of the same level are not perceived as being the same loudness.

“The Integrated loudness measurement specifically takes into account this aspect of human hearing perception of loudness and adjusts accordingly.”

WHERE SHOULD WE SET LEVELS?

As you might expect, there is no one simple answer… sigh – is there ever? However, here’s the Cliff Notes version:

NOTE: Apparently, according to the AskAudio article, iTunes “soundcheck” is leveling audio around -16 LUFS, while YouTube is normalizing levels between -12 and -14 LUFS.

HOW DO WE MEASURE LEVELS 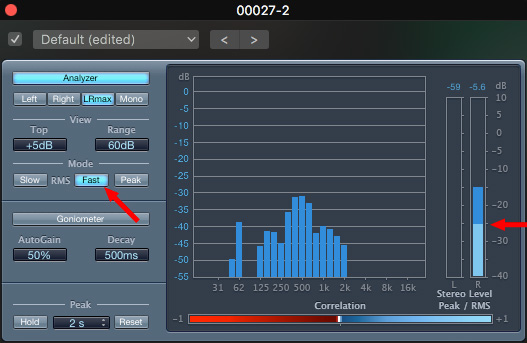 In Final Cut Pro X, the closest we come to measuring LUFS is the Multimeter in RMS view. However, there’s a significant difference between RMS and LUFS, so this should not be considered accurate.

Tom Thornton, in his blog, recommended a Klang Freund unit that worked for him.

There are other meters you can find with a Google search. I don’t have a recommendation because if I need LUFS metering, I use Adobe Audition. For example, all my Digital Production Buzz interviews and programs are mixed to -16 LUFS before posting to the web.

NOTE: From my perspective, it is past time for Apple to support LUFS measurement and the ITU standard natively inside both Logic and Final Cut Pro X. Adobe already has an excellent system for doing so. 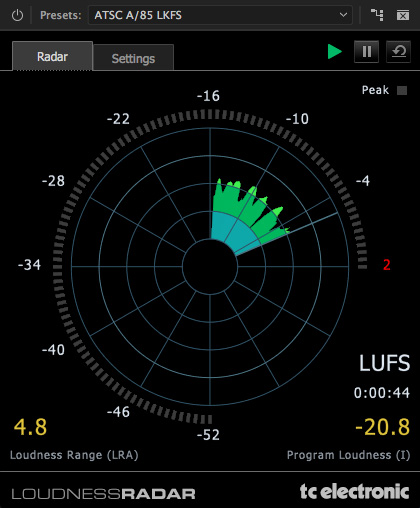 NOTE: Here’s an illustrated tutorial that explains how this works.

HOW DO WE BEST CORRECT OUR LEVELS?

In Final Cut, some of the 3rd-party plug-ins provide options to correct audio levels. Or, you can create a compound clip of your entire project and apply the Limiter filter to bring levels into spec.

In Premiere, I export my project to Audition for mixing before final output. 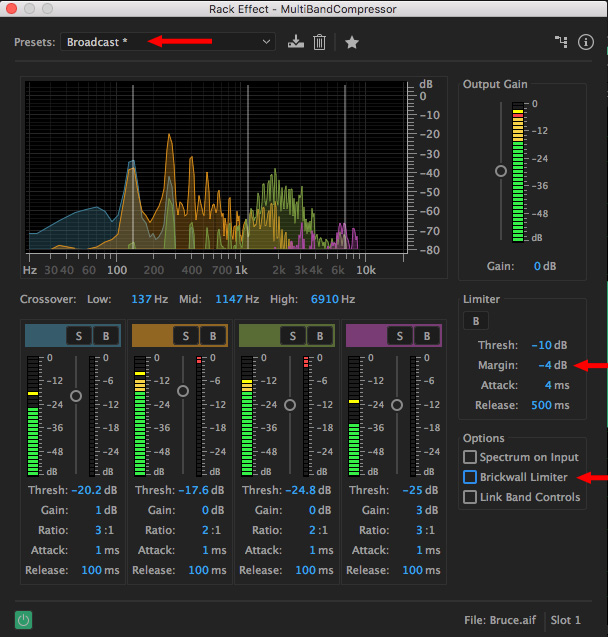 In Audition, I use the Multiband Compressor filter to adjust levels to meet a -16 LUFS measurement. Just as a suggestion, here are my settings:

In almost all cases, given my recording levels, this creates audio with average levels around -16 LUFS.

As filmmakers and videographers, it is essential to have high-quality audio. If you are creating projects for broadcast, you’ve been working to these standards for a while. However, even if all you are doing is posting to the web, following these settings will enable your audio to sound as good as it can, while still meeting all current standards for loudness.

11 Responses to Why LUFS and LKFS are Essential to Video