What Makes a Monitor a Retina Display?

As I was writing my review of the ViewSonic VP2776 Color Pro monitor, I realized that there was a big difference in the quality of the display of monitors labeled “Retina display” compared to those that aren’t. But, what makes a monitor a “Retina display?”

What I learned is that Retina is a registered Apple trademark, “[a marketing term] for which there’s no concrete definition: put simply, a Retina display is any screen Apple has decided to call that. (MacWorld)

Retina display was introduced by Steve Jobs when he launched the iPhone 4. He described the screen as packed with so many pixels that you could no longer see individual pixels when viewing the screen at a distance of 12 inches (30 cm). In other words, he defined a  retina display in terms of pixel density; which is measured in pixels per inch (ppi).

NOTE: While retina display monitors are generally thought of as 4K or larger, any monitor that can scale to 50% of its maximum resolution will look like a retina display. I proved this with the ViewSonic monitor which has a native resolution of 2560 x 1440. When scaled to 1280 x 720 (50%), text and image quality matched that of a retina display; though, obviously, the total resolution was much less. 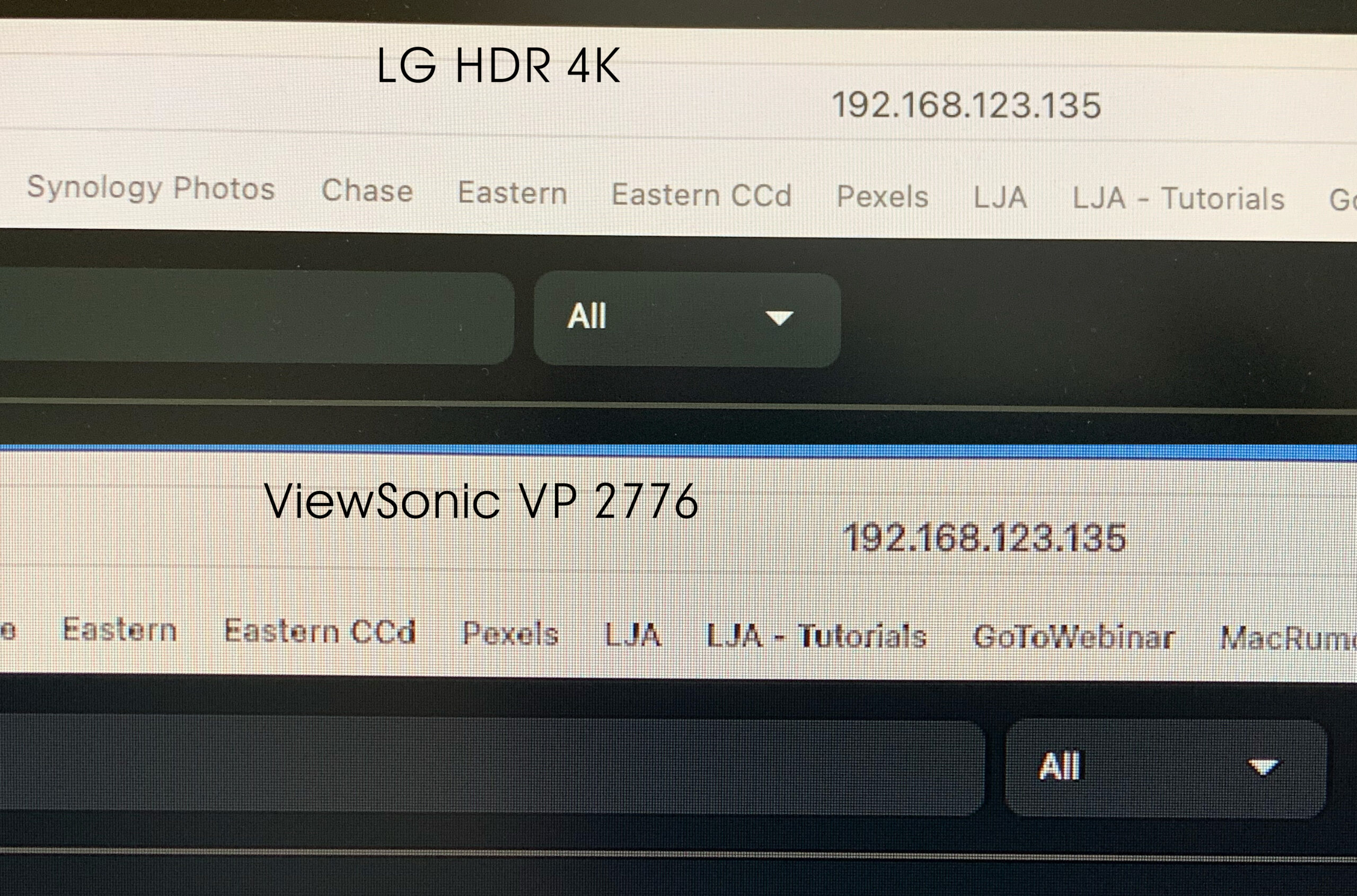 Compare the fuzziness of the text in the Favorites bar – Retina (top) non-retina (bottom).
Both monitors are set to their default resolution. (Click to see a larger image.)

But, a hidden criteria in addition to pixel density is viewing distance. The closer your eyes are to the screen, the closer the pixels need to pack together. Digital billboards that you view from your car have a very low pixel density because they are viewed from a great distance. iPhones are just the opposite.

The specific pixel density varies by monitor. Some iPhones cram up to 458 pixels to the inch. MacBook Pro monitors (at least on my M1 MacBook Pro) display 144 pixels per inch. Traditionally, monitors display 72 ppi. 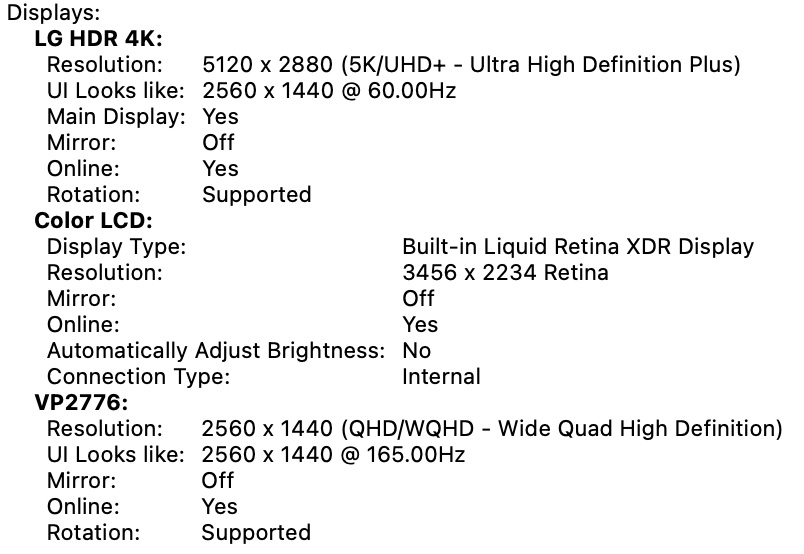 As an example, I have three monitors connected to my MacBook Pro (M1):

NOTE: You can view a similar report for your system by choosing Apple menu > About this Mac, then click System Report and look at the Display section.

The big benefit to this increased pixel density is that text looks smoother, images look crisper, and edges no longer look stair-stepped. 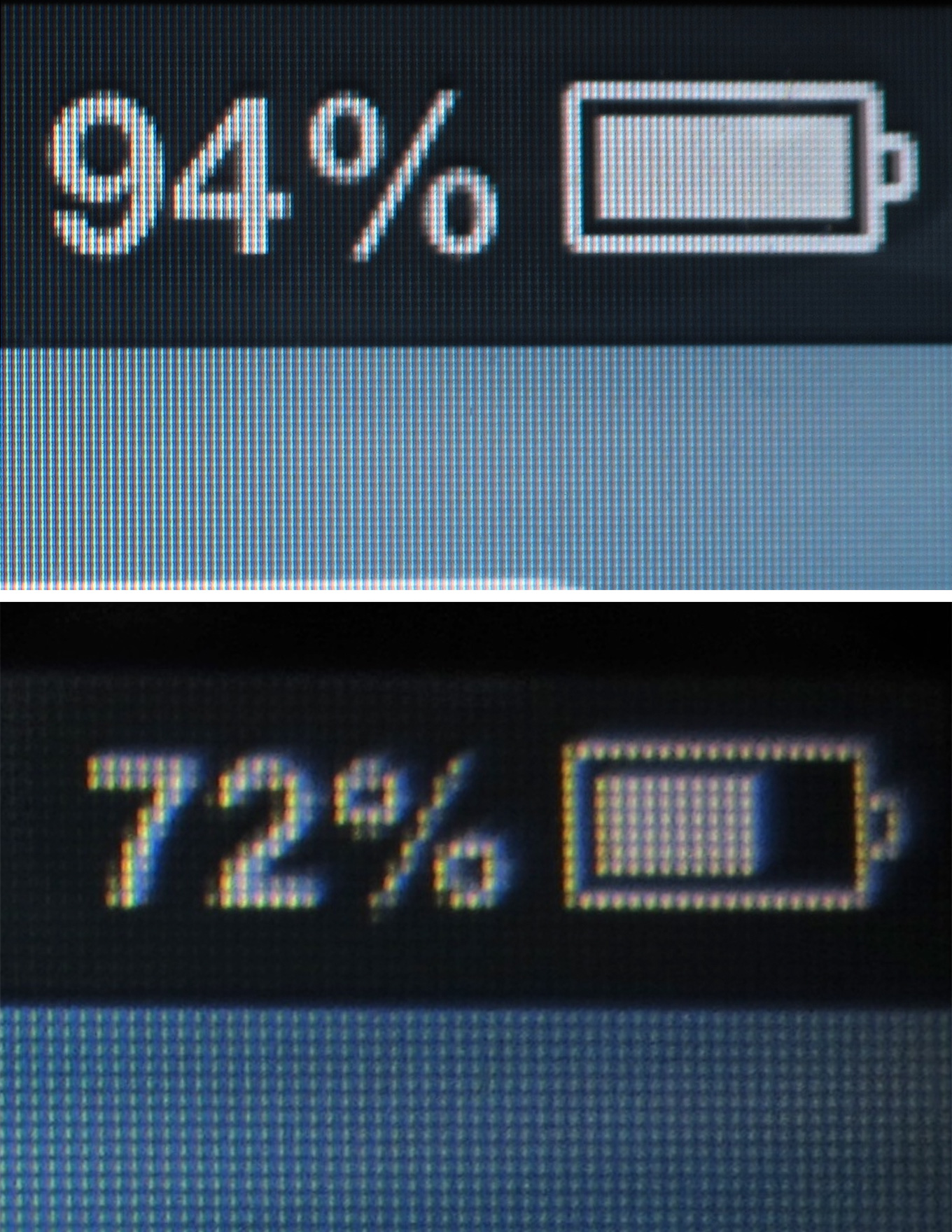 This is the real reason behind monitor manufacturers touting 4K, 5K, even 6K monitors. Almost never does the the monitor display its full resolution. Instead, the macOS turns that monitor into a “Retina display” by cutting the resolution in half to improve image and text quality. Thus:

NOTE: You can see this for yourself when you take a screen shot. Open the screenshot in Preview, choose File > Get Info and look at the File DPI setting. In the case of my Mac, it’s 144 dpi.

You can obviously set a monitor to its highest resolution, but text will look ragged and virtually all interface elements become desperately tiny. This brings us to the second key feature of a retina display.

I’ve seen that for myself as I move elements between an LG 4K (retina) and a ViewSonic 2.5K (non-retina) monitor. While the smoothness of the text changes, the size of the interface elements do not.

Which, I must admit, is pretty cool. This required a lot of programming to make moving a window between monitors look like nothing happened.

NOTE: You can see this for yourself in the image at the top of this article.

AND YET, THERE’S MORE

Since “Retina Display” is an Apple marketing terms, Apple has extended the brand with the release of new iPhone and monitors:

These are simply different ways to differentiate monitors with extra-dense pixels.

NOTE: I initially thought that “Liquid” might refer to refresh speeds, but I no longer think that’s the case.

Since this is an Apple marketing term, other manufacturers need to use other words to describe their own extra-dense monitors. But the concept is the same.

According to Macworld, since January, 2018, every Apple product with a built-in display supports Retina or better, with the exception of the MacBook Air and the 27″ Thunderbolt display.

So, while the term “Retina Display” is reserved for Apple hardware, the results of increasing pixel density to improve text and images extend across all Mac-compatible monitors, whether from Apple or third-parties. The key to keep in mind is that, if you want your text to look it’s best, get at least a 4K monitor and expect the actual on-screen resolution to equal 1/2 the maximum monitor resolution.

3 Responses to What Makes a Monitor a Retina Display?