I’ve been a long-time fan of Apple Compressor for compressing videos for YouTube and the web. And, for an equally long time, I’ve not been impressed with Adobe Media Encoder.

But all this changed recently – which is why I’m writing this article. In the past, I’ve had three big complaints about AME:

My first complaint is fairly obvious. But the other two need some explanation.

What automatic pass-through does is allow me to compress a file without first knowing what frame rate or image size the source file is. This is important because I often want to resize a file but not change the frame rate; changing the frame rate often causes movement to become stuttery. Without automatic pass-through, I would need to know every technical aspect of a source clip in order to compress it successfully.

In the past, AME would expect you to add effects like watermarking, timecode burn-in or text superimpositions using Premiere. But, not everyone knew how to use Premiere, or even wanted to.

I was talking about this at NAB this year to Bill Roberts, the Director of Product Management for Video and Audio Solutions at Adobe Systems. Bill looked at me and smiled. “Take a look at the next version,” he suggested.

I did and, wow! I’m impressed. So I decided to do a speed test between the two applications.

NOTE: Newer systems will run faster than my test iMac. Different files will compress differently. However, the relative differences should remain about the same.

My test files were all less than ten minutes in length and used three different codecs:

One movie was a screen capture from my training, one was a news story on the demolition of the Bay Bridge and one was a dance movie.

Each application ran by itself using its default configuration. Multiple instances of the same application were not allowed. No other software was running in the foreground during these tests. In fact, I tried to keep background processes to a minimum.

All source movies were 1280 x 720. Image sizes and frame rates were passed-thru. I added the same watermark to each movie, each with a 40% opacity.

I created three different output files of each source movie. (I selected MPEG-4 because that is the native format for IOS devices.)

It was impossible to perfectly match all the compression settings due to interface differences between the two applications, but I tried to get them as close as possible. 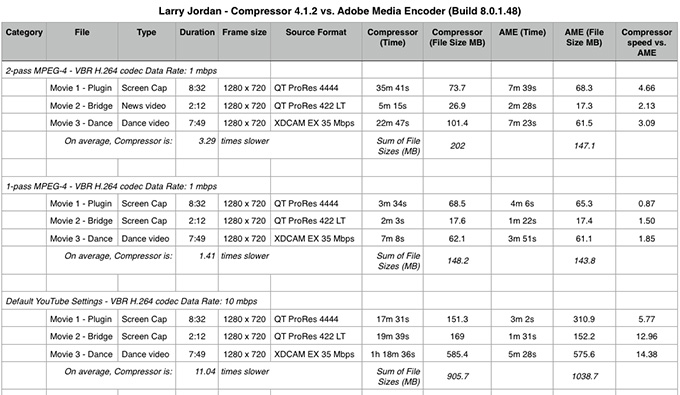 Adobe Media Encoder is significantly faster than Apple Compressor. By a lot. And with much better image quality at lower bit rates.

NOTE: Any image will look good at higher bit rates. The real test of image quality during compression is how good an image looks at lower bit rates.

In 2-pass MPEG-4 compression AME is more than three times faster than Compressor.

And when compressing for YouTube using, essentially, the default YouTube settings for both applications, AME is more than six times FASTER! In fact, a job that AME did in less than six minutes took Compressor more than an hour to complete!

The hardest video to compress is video where there is a lot of movement between frames. In these image samples, I used a close-up shot of a cutting torch because the sparks were rapidly moving. Also, the camera was hand-held, which meant that there was a gentle movement to the steel beams, as well.

As you would expect, image quality for 2-pass images was higher than for 1-pass images. However, I was surprised that at the lower data rates, the image quality between the 1-pass and 2-pass settings were as close as they were.

Also, I was REALLY surprised at the poor image quality for Compressor at the lower data rate.

Click to see larger image. (Use magnifying glass to zoom in.)

Here are details of three images from Adobe Media Encoder – I shrank them here in the article, but if you click the link, you’ll see them at 100% size. The top image is the source, the second image is 2-pass MPEG-4 and the bottom image is 1-pass MPEG-4. Notice the blurring of detail in the steel and the lack of detail in the sparks.

NOTE: The screen grabs were composited at 100% size using Photoshop, where I selected a matching portion of each image. I then output this composited image using the highest quality JPEG settings that Photoshop provided.

Click to see larger image. (Use magnifying glass to zoom in.)

Here’s the same image when compressed with Apple Compressor. Source on top, 2-pass MPEG-4 in the middle and 1-pass MPEG-4 at the bottom. I am truly surprised at the lower quality of both MPEG images.

There could be something wrong with my settings – but I ran these tests three times and got similar image quality each time.

NOTE: The screen grabs were composited at 100% size using Photoshop, where I selected a matching portion of each image. I then output this composited image using the highest quality JPEG settings that Photoshop provided.

Image quality for YouTube compression was essentially the same for both applications.

For the first time, in my opinion, Adobe Media Encoder more than holds its own with Apple Compressor in terms of speed, image quality, and flexibility. The results of this test are striking!

If you haven’t tried Adobe Media Encoder recently, it’s time to give it another look. The Mercury Playback Engine has put a rocket under its compression engine; especially when compressing MPEG-4 for the the web. I don’t expect Apple will allow AME to be the speed champion for long. But it is VERY nice that, finally, Compressor has some competition.

While I still use Compressor to create ProRes transcodes, I’m using Adobe Media Encoder to compress everything I’m currently posting to the web.