In Feb. 2020, Apple published a Mac Pro Technology Overview (link) detailing the technical features of the new Mac Pro (2019). It is an excellent, detailed and understandable “deep dive” into one of the most exciting computers Apple has ever released.

One of the sections in this report detailed Afterburner, a graphics card optimized for the entire ProRes codec family, including ProRes RAW.

NOTE: This article is not a review. I have not used an Afterburner card, yet. 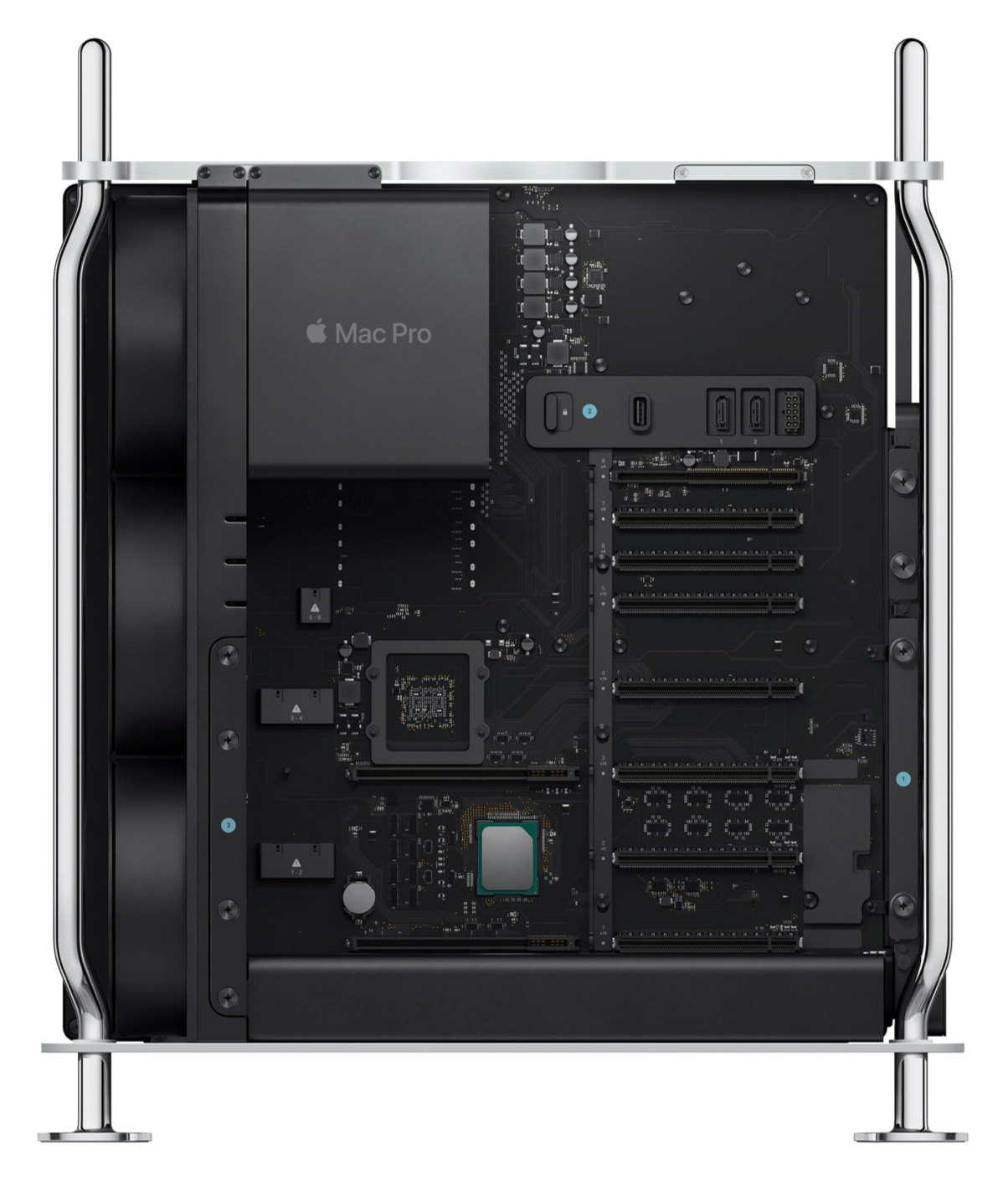 For general-purpose video editing using a variety of different codecs, a high-performance AMD graphics card is the better choice. However, Afterburner is the GPU of choice for an all-ProRes workflow. (Or, one where you convert camera native media into ProRes.)

One of the areas Apple directly addresses with Afterburner is multicam editing. For some projects, Afterburner may make the difference between meeting a deadline or missing it. Concert videos today routinely record 15, 20, or even more cameras. Some shoot HD, others are shooting 4K or greater.

As multicam camera counts go up, Afterburner can support editing more streams at full-resolution. However, there are several gating factors that could diminish the performance benefits of Afterburner:

However, for the budget conscious, invest in a general purpose GPU, high-performance storage, fewer CPU cores and utilize a proxy workflow.

UPDATE: In looking at the table below, I realized that where AfterBurner will have the greatest impact is working with ProRes RAW files. As the table indicates, streaming ProRes 422 files is principally CPU based, and adding AfterBurner won’t help much. 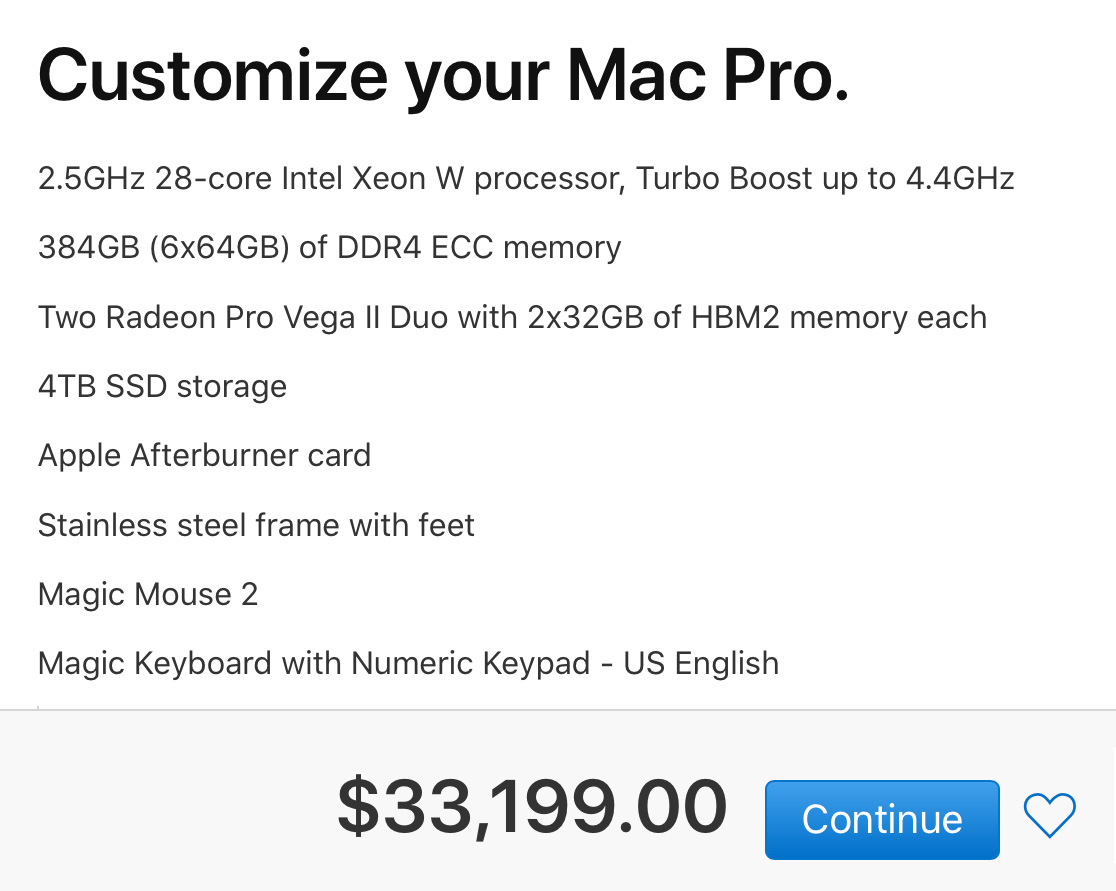 NOTE: Apple’s performance testing, as listed in the note at the bottom, used a high-performance Mac Pro, illustrated in this screen shot.

Many film and video workflows rely on proxy workflows, where original camera native files are transcoded into lower-resolution proxy files, taking time, compute resources, and additional storage space. Proxy files are then used for editing, and then late in the workflow the files are matched back to the original high-quality camera formats for color grading and finishing.

Afterburner was designed to enable camera native files to be used throughout the workflow without the need for proxies. It does this by offloading the decoding of all flavors of the ProRes video codec, including ProRes 422HQ, ProRes 4444, ProRes XQ, and ProRes RAW, with the exception of interleaved formats that are currently decoded strictly in software, and the final debayer of ProRes RAW images that are done on the GPU. Since the ProRes codec is normally decoded on the CPU, Afterburner frees up CPU resources—allowing more CPU headroom for other video processing or compute demands, or enabling a lower core count Mac Pro to work with demanding high stream count projects.

Architecturally, the Afterburner card is built around an FPGA (field programmable gate array)—a programmable logic chip. The FPGA has over a million system logic cells and can process up to 6.3 billion pixels per second. It uses a secure firmware loading process that ensures it can only run Apple authorized code and can be reprogrammed on the order of 50 milliseconds. The driver that manages the Afterburner card will load-balance ProRes decode tasks across multiple Afterburner cards if installed. With application support, Afterburner and CPU can be utilized together, enabling even higher stream counts and more demanding video projects on Mac Pro.

Afterburner can be installed in any full-length PCI Express slot in Mac Pro; however, it requires a PCI Express x16 slot to deliver the highest stream counts due to the bandwidth required for decoded video frames. When ordered from Apple with a Mac Pro, it will be preinstalled in the factory in slot 5, a full-length x16 slot. Afterburner is not supported in a Thunderbolt PCI Express expansion chassis and is not supported in Boot Camp under Windows.