The History Behind Frame Rates [u]

[Updated May 26, 2019, with the rest of the story on how frame rates were invented. Sorry it took so long.]

I am fascinated by history; mainly because it explains how we got to where we are today.

For many years, I’ve told my students that the reason we have 30 fps video in North America was that, when TV was being invented, accurate clock circuits did not exist. So, the engineers designing a system to synchronize the TV receiver with the transmitter decided to use 60-cycle AC current as their clock.

For technical reasons dealing principally with the fact that the phosphors in early picture tubes lost their “glow” too quickly, these same engineers realized that the best way to display a consistent picture was to divide it into two fields, rather than a single complete image.

So, 60 cycles divided by 2 fields equals 30 frames per second.

NOTE: How we got from 30 fps to 29.97 fps is another fascinating story, but for a different article.

SECOND NOTE: It took me five years to write, but here’s “The Rest of the Story” on frame rates. 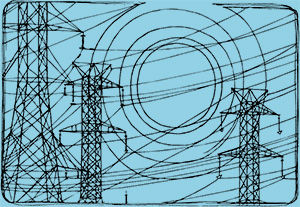 That was where my story usually ended. Except, last week, I used the same story in my webinar on Audio in FCP X, and Derek Roff was so intrigued that he decided to do more research. And both of us discovered that there was more to the story than we thought.

The email that he sent me was so interesting, I want to share it with you this week.

Your brief discussion of 50 Hz vs 60 Hz AC electrical power caught my attention, since it was different than what I had heard before. After your show, I did some online research, and learned a good bit of information that was new to me. From the dozen or so well-written discussions that I read (and ignoring the poor ones), it seems clear that no one knows the exact reasons for the choices of 50 and 60 HZ. Below is a summary of what I learned, and then a few interesting quotes from the web.

60 Hz was promoted by Tesla and Westinghouse, although Westinghouse produced and promoted other frequencies, as well. 50 Hz was promoted by AEG of Germany, [which was] descended from a company founded by Edison. These standards took decades to dominate their respective markets, and different frequencies were used in the same region, city, and even within the same company’s products and electricity delivery services, ranging from 8 HZ to more than 133 1/3 Hz.

Fractional Hz values were common. London still had 10 frequencies in use in 1918. Parts of the US and Canada near Niagara Falls used 25 Hz into the 1950s, and 25 Hz generators were still producing power in the region through 2009, although the power was delivered at 60 Hz through frequency converters. 16 2/3 Hz is still used for rail networks in Germany, Austria, Switzerland, Sweden and Norway.

There are some applications where lower frequencies are beneficial (large motors), and some where high frequencies help (small, lightweight transformers). 400 Hz is used on US aircraft, spacecraft, submarines, aircraft carriers, server rooms, and parts of your MacBook Pro power supply. Both 50 and 60 Hz were a good compromise for the times, and are still reasonable for today.

NOTE: Since this was written, I’ve run across other references that say the MacBook Pro power supply uses an even higher frequency. Since people are publishing different opinions, and I couldn’t find an Apple statement, it may be safest to say that the consensus is that this power supply runs at more than 60 HZ. Laptop power supplies from at least some other companies also run at higher frequencies, according to the information that I have found online.

I was very surprised to learn that Eastern Japan (Tokyo, etc.) uses 50 Hz, while Western Japan (Kyoto, etc.) uses 60 Hz. As you said, the US helped rebuild Japan’s electrical system after WWII, but only in the west and south. Britain helped rebuild in the east and north, and used Britain’s 50 Hz standard. Up to my research today, I had always read that Japan used 60 Hz. That’s surprisingly incomplete information, considering that the capital city and largest population center, Tokyo/Yokohama, uses 50 Hz.

So thanks for a great webinar on audio for video, and thanks, too, for the stimulus to research the story of 50 and 60 Hz. Here are some quotes from the web you might find interesting. 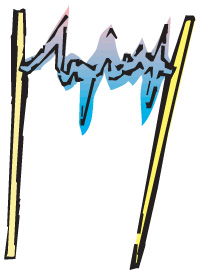 With the backing of the Westinghouse Company, Tesla’s AC system became the standard in the United States. Meanwhile, the German company, AEG, started generating electricity and became a virtual monopoly in Europe. AEG decided to use 50 Hz instead of 60 Hz to better fit their metric standards, but they stayed with 120V.

Unfortunately, 50 Hz AC has greater losses and is not as efficient as 60 HZ. Due to the slower speed 50 Hz electrical generators are 20% less effective than 60Hz generators. Electrical transmission at 50Hz is about 10-15% less efficient. 50 Hz transformers require larger windings and 50Hz electric motors are less efficient than those meant to run at 60Hz. They are more costly to make to handle the electrical losses and the extra heat generated at the lower frequency.

Europe stayed at 120V AC until the 1950s, just after World War II. They then switched over to 230V for better efficiency in electrical transmission.

The United States also considered converting to 220V for home use but felt it would be too costly, due to all the 120V electrical appliances people had. A compromise was made in the U.S. in that 240V would come into the house where it would be split to 120V to power most appliances. Certain household appliances such as the electric stove and electric clothes dryer would be powered at 240V.

The reason for this is that after World War II, Britain was in charge of helping reconstruct Japan’s electrical system in the eastern part of the country and the United States set up the electricity in the western part of Japan. Since Great Britain (United Kingdom) uses 50Hz, they set the frequency in eastern Japan at 50Hz, while the U.S. set the western area at 60Hz.

It is unfortunate that they did not coordinate their efforts. Having different voltages and frequencies within the country not only must be confusing for the people but also can result in extra costs for appliances and adapters.

Here’s the link for these quotes.

Larry adds: What amazes me about all these different frequencies was that there was enough consistency to use them as a standard to set frame rates for video. Interesting… Thanks, Derek!