[This article was first published in the September, 2010, issue of
Larry’s Final Cut Pro Newsletter. Click here to subscribe.]

For those of you interested in a more technical look at the Broadcast Safe filter, Dennis Couzin sent me the following article that he wrote. (Dennis is the technical assistant to a video documentarian based in Germany.)

In the past, I’ve just used the default settings of this filter. It is nice to know what these settings do.

Clamp Above: All luma values above this parameter value are clamped to the parameter value. The lower you set this value, the more clipping occurs at the top of the waveform.

The underlying problem is that Apple’s description of Clamp Above is circular. It’s first sentence says literally:

I found the filter does this:

#1 All lumas above clamp become max.

#2 All lumas between start and clamp are linearly squeezed into the range start to max.

#3 All lumas below start are unchanged.

Enough with words! Another way to describe what the three controls do is graphically. Again assume the normal ordering of levels,

The graph shows the relation between input and output. The result is a broken line. Starting at (0, 0), output exactly equals input until we get to the point (start, start). Then output increases more slowly than input until we get to the point (clamp, max). Then output remains constant at max. So the Broadcast Safe filter can do a crude, broken-line version of a roll-off filter. 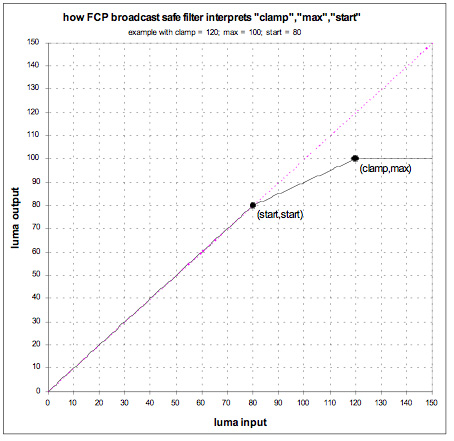 For fun I’ve made an Excel sheet to produce the graphs from the control settings, whatever they may be. It can be downloaded from: www.mediafire.com/?9h4qdr68apifkcd.