Wow! This was not what I expected.

This week, I want to compare the compression speed of Adobe Media Encoder CC (2014) (AME) with Apple Compressor 4.2 when encoding files for YouTube using a new Mac Pro, a 21″ iMac and a 15″ MacBook Pro.

For the last year or two, AME was the hands-down speed champion. But Apple touts the new speed of Compressor, so it was time to test them both. This article is part of series looking at Apple Compressor:

AME defaults to 1-pass VBR encoding, but that generated excessively large files. Excluding that one setting, file sizes for all different compression methods were with 5% of each other. If you are compressing with AME, be sure to use 2-pass encoding, which, also, is not the default setting.

Different codecs compress at different speeds. For example, the MacPro really struggled with XDCAM EX, while the iMac and MacBook Pro breezed through it.

2-pass compression roughly doubled compression time; however, for AME this is a good choice to reduce compressed file sizes.

NOTE: This test used the same YouTube compression setting for all systems and all tests. While this does not yield the smallest file sizes, a 10 mbps bit rate will yield excellent image quality in all cases. So, no quality determinations were made.

Compression settings. AME defaults to 1-pass VBR with a 16 mbps bit rate. Compressor defaults to a 2-pass VBR with a 9765 kbps bit rate. I tested both 1-pass and 2-pass VBR, with a standardized bit rate for both applications. In all cases, I used the default YouTube 720p compression setting and only modified the bit rates to match at 10 mbps. Max and Min settings in AME were identical at 10.

Compression times were reported by the application. No other apps were running during compression. Only one setting was applied to each clip. Clips compressed individually, no two clips compressed at the same time.

Compressor was restarted when I changed the number of instances.

NOTE: I have been asked to run these tests on an older Mac Pro. I tried. But I couldn’t get Yosemite to run on my 2010 Mac Pro. I would expect old Mac Pro times to be about double the iMac compression times, because it can’t take advantage of the hardware acceleration built into Compressor, and its GPU is slower than the new Mac Pro. 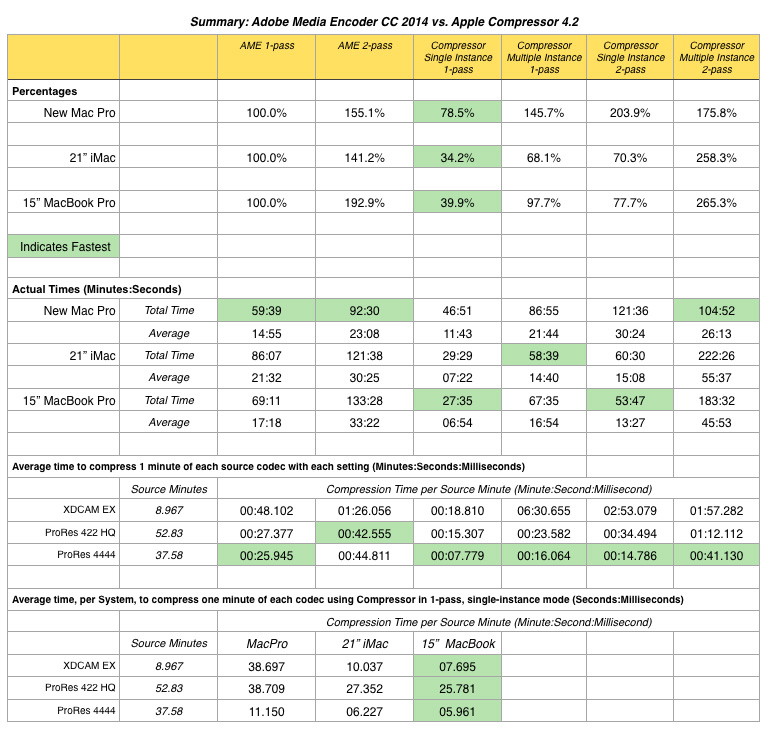 Here is a summary of what I learned. Green bars indicate the fastest results in each category. Because AME has been the fastest system, I set its 1-pass VBR setting to equal 100% and compared everything else to it. Faster compression speeds will be smaller than 100.

Single-instance, 1-pass VBR compression in Compressor was the fastest option of the six tests for every system. However, this is not the default YouTube setting for Compressor. If we compare the 2-pass default settings, AME is faster for the Mac Pro, while Compressor is faster for the iMac and MacBook Pro.

I calculated this section by totaling compression times for all four movies compressed on each system (Total Time). For completeness, I also averaged compression times, but the results were the same.

The MacPro was the clear winner when compressing for AME. But dead last when compressing using Compressor. This is because the CPUs for the iMac and MacBook Pro provide hardware acceleration which is missing from the Mac Pro.

In fact, I was stunned to see the MacBook Pro won every Compression speed test when in single instance mode.

I also wanted to test the impact codec (video format) had on compression speed.  In this section, I show how long it takes to compress a minute of each codec using each of the six tested settings.

I wasn’t surprised that XDCAM EX (a variant of MPEG-2) took longer to compress. What DID surprise me was how much slower ProRes 422 HQ was to compress compared to ProRes 4444. In all cases but one, ProRes 4444 was the fastest codec.

I then compared the compression speed by codec for each system. Here, I used the 1-pass single-instance compression results in Compressor to compare systems and codecs.

This dramatically illustrates the speed of the MacBook Pro and the speed differences inherent in each codec.

Click here  to download a 4-page PDF detailing all my findings, so you can check my math.)

This test took most of three days this week – I’m glad I did it, but it took a long time. Here’s what I learned:

BIG NOTE: Adobe is a few weeks away from releasing a new version of Adobe Media Encoder. I’ll keep these results and media on file and test to see how the speeds of the new version of AME compare to this one.