Last week, Adobe updated all their media applications to version 2015.3. Because I’ve been testing compression performance for both Adobe Media Encoder and Apple Compressor since 2014, I decided to update my tests to compare the new version to earlier results.

While AME supports a wide variety of codecs and capabilities, my tests have focused on testing the default settings for YouTube compression. First, because this remains a very popular destination for many of the videos we create and, second, because it allows me to use default settings, which removes the possibility that I could slow compression speed by dialing in my own preferences.

These tests looked at the difference in both file size and compression speed for 1-pass and 2-pass compression for all four files.

This year, I ran the tests on a Late 2013 27″ iMac, the last two years ran on an 21″ iMac. (I no longer have the 21″ iMac.) The CPU of the 27″ iMac is 12.9% faster that the 21″ system. Adobe’s YouTube compression does not use the GPU, as far as I understand, so CPU speed will impact compression performance. In other word, speed improvements of less than 12% can probably be attributed to the faster CPU.

The default bit rate setting for YouTube is 16 mbps. However, to be able to compare Apple Compressor with Adobe Media Encoder, I altered AME’s bit rate to 10 mbps to match Compressor. This year, I ran tests to see what the performance difference is when compressing at 10 mbps and 16 mbps.

I did not do any testing on Windows. While I would expect similar results, ProRes is not supported as well on Windows as on the Mac. GoPro Cineform would be a better high-end codec to use on Windows. 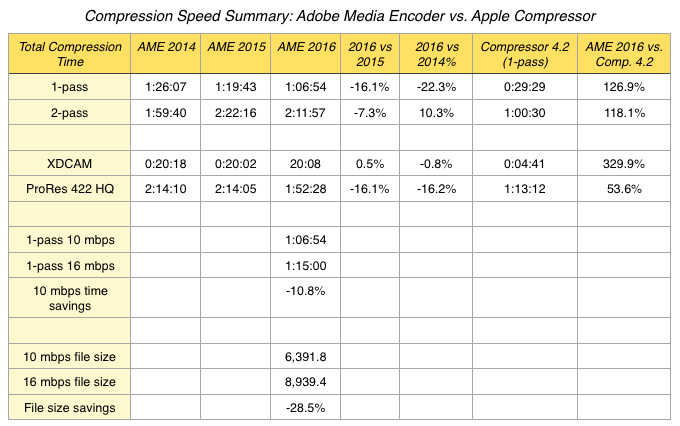 NOTE: Click here to download a PDF containing both a summary of my findings, along with detailed test results.

Adobe continues to improve performance in the latest version of Adobe Media Encoder. Also, the default setting of 1-pass indicates Adobe’s agreement that, at this bit rate, there’s no advantage to 2-pass.