As I was researching my new Final Cut Pro X book, I discovered this interesting technique that I wanted to share with you.

Many times, editors need to share projects. While Final Cut Pro X does not allow more than one editor to be working in the same project at the same time, there is a way to share the same project between editors. Event References make this possible.

A Final Cut Pro X project doesn’t contain media, it just “points” to media, which is stored in your Final Cut Events folder. This media can be stored locally, or on an XSAN server – though not, however, on a standard-issue OS X Server. We can take advantage of this fact when it comes to sharing projects between editors.

The second editor can make changes to both the Project and the Event, such as, say, editing clips, adding keywords, changing clip names in the Event Browser, and flagging clips as Favorites using ratings. However, the second editor can not change the media itself, nor add new media.

Then, the second editor sends just the Project folder back to the first editor. (Important note, he needs to send the entire Project folder, not just a single Project file contained inside it.)

With the Project selected, the editor chooses File > Project Properties (or presses Command+J).

Click the wrench icon (just above the Inspector button) to display the Project Properties window. 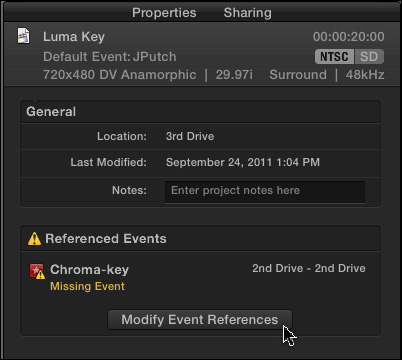 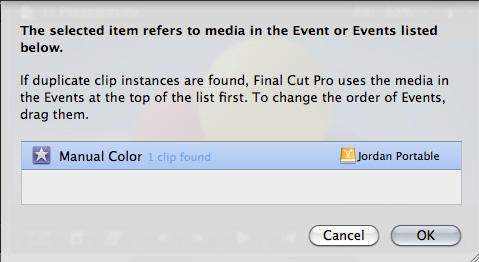 Navigate to the Event folder stored locally on her system and select it. The first editor’s Project now connects to this local media, rather than the media on the second editor’s system.

By changing Event References, both editors can send this Project back and forth for additional work. Keep in mind that once the Project is sent to one editor, the other editor can not work on the Project as there is no way to reconcile the differences between two versions of the same Project.

Both the first and second editor have their copy of the Event folder and media stored locally. Changing Event References allows repointing a Project from one Event folder to another.

This is a very intriguing use of the media management in FCP X because it easily allows changing the Event that is referenced by a Project. It isn’t the same as relinking individual clips, but allows an editor to repoint to all the media in an entire project.