[Click here to read my disclosure statement on product reviews.]

The Sennheiser ClipMic digital is a high-quality digital microphone specifically designed to record to iOS devices. In this review, I want to look at whether it is worth the money. So, I asked the team at Apogee Electronics to loan me a unit to test for a week. 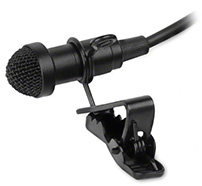 The Sennheiser ClipMic digital delivers professional-level recordings when connected via a Lightning cable to a modern iOS device. Using the included MetaRecorder from Apogee, it’s easy to record interviews, presentations or performances. It more than holds its own when compared to traditional, professional-grade lavaliere microphones.

The mic has a nice, present, rich sound that works especially well for female voices.

Except in very rare instances, audio is essential for any project. Unfortunately, audio tends to be relegated to: “Oh, I’ll just use whatever mic I’ve got.” (Or, much worse, “I’ll just use the camera mic…”)

The sad fact is that not all mics are created equal, and picking the wrong mic can destroy an otherwise great shoot. However, I’m not an audio engineer. I’m a video producer who wants high-quality audio, without having to sweat every detail.

The first rule of audio is that the closer you get the mic to the mouth, the better the sound quality.

This, of course, is in direct conflict with the first rule of video, which is to never see a mic (i.e. “Hide the magic.”).

Lavaliere mics were invented as a balance between these two conflicting rules – small, inconspicuous mics that can be placed close to the speaker’s mouth.

When it comes to audio, I’m a traditionalist. I buy the best mics I can afford, record them using professional-grade equipment and mix them using high-quality monitor speakers and software. 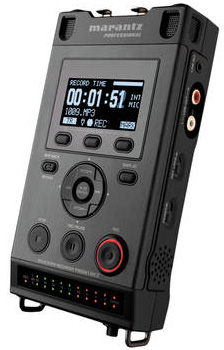 Every week, we record the audio broadcast of the Digital Production Buzz to a Marantz PMD-661 digital audio recorder (the image on the right). We’ve used Marantz gear for years on the show. Rugged, reliable and the size of a paperback book. 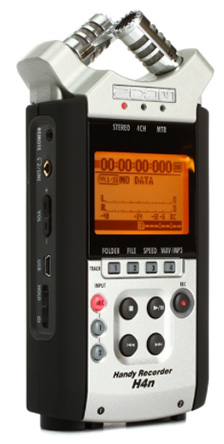 When I did remote interviews, or needed to record double-system sound on-location, I would use a Zoom H4n digital audio recorder (the image on the left). Slightly smaller than the Marantz, I use two of these as part of our remote audio kits. However, I never used the built-in mics of either device, I always used handheld Shure SM-58 mics for audio-only interviews, or a variety of headsets or lavs for a video interview.

It would never occur to me to use an iPhone or iPad. Why? Because of the microphone connector. Mics connected via a 1/8″ mini-plug were invariably cheap-sounding, noisy, and couldn’t begin to compare to the sound of quality professional gear.

When you have to get the recording right the first time, using a cheap mic isn’t worth the risk.

Sennheiser, founded in 1945 and headquartered in Wennebostel, Germany, (a small village close to the northern German city of Hanover), is known world-wide for professional audio products.

There are two key things that set the Sennheiser ClipMic digital apart from the competition:

Sennheiser created the mic, while Apogee created the software to record the mic on an iOS device.

The huge advantage to converting to digital before the signal enters a digital device is that you remove opportunities for noise to enter the signal path; either via the cable or the connector. Anything that reduces noise is good. The ClipMic integrates converting the analog signal coming from the mic into digital as part of the mic cable; less than five feet of cable exists for the analog signal to travel before the conversion occurs.

The huge disadvantage to converting an analog signal to digital is that the quality of a mic is totally dependent upon the quality of the A/D (analog-to-digital) conversion software. A great mic, converted with bad software, yields bad audio. That’s where Apogee becomes important.

Apogee began in 1985 to develop “technology that addressed the inherit brittleness and distortion heard on the new listening medium of the day, compact discs (CDs). Apogee’s unique 924 and 944 anti-aliasing filters were used in high-end Sony and Mitsubishi digital recording systems to make the CD format sound warmer and more like analog.” (Apogee’s website)

Based in Santa Monica, Apogee evolved “from the groundbreaking 924 and 944 filters to leading the studio-quality home recording revolution with Duet and Ensemble to MiC and JAM, the first pro products for iOS recording.” (Apogee’s website)

I’ve known about Apogee for many years, but this was the first time I was able to work directly with their gear. 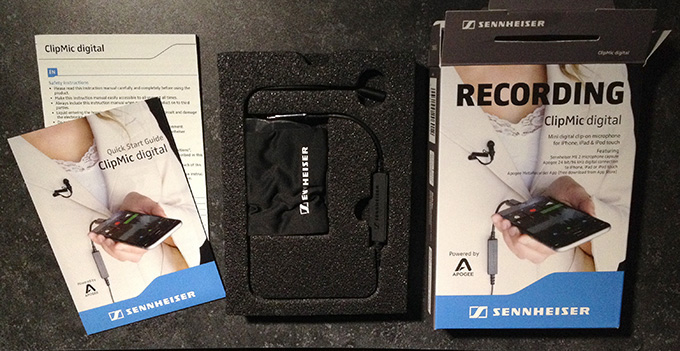 The ClipMic comes in a box about the size of a paperback book. It includes the mic, mic hardware and installation instructions.

NOTE: Installation is easy, but it REALLY helps if you read the short, illustrated Quick Start Guide before you start recording. (Ah, personal experience speaking.) 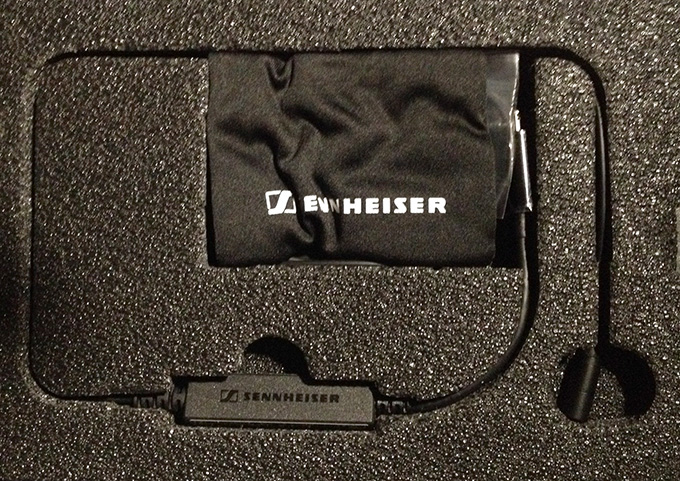 I like how the mic is packaged – safely and securely in its own foam packing. 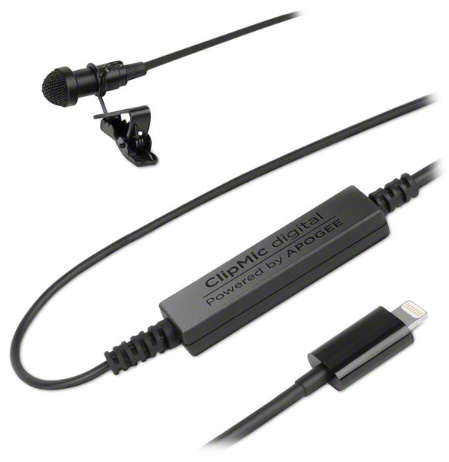 The mic is a single cable with the mic at one end, A/D converter near the middle and a Lightning connector for an iOS device at the other end. Cable and connectors have the professional look-and-feel you would expect from Sennheiser.

NOTE: While the mic is constructed by Sennheiser, it uses A/D software developed by Apogee. 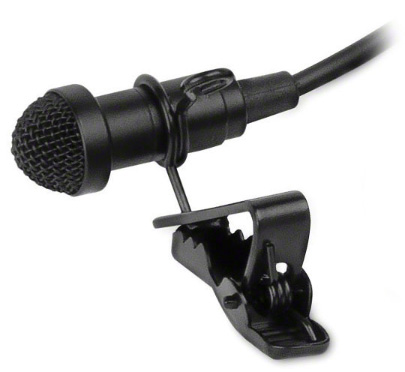 The mic itself is small; about 3/4-inch long and 1/4-inch in diameter. It isn’t the smallest lav I’ve seen, but tiny is not always good when it comes to microphone quality. It looks, works and acts like any other lavaliere mic.

NOTE: The best place to put a lav is between the first and second buttons on a shirt. Close to the mouth, but not directly under the chin.

I asked Megan, our production supervisor, to install the MetaRecorder software on her phone. She told me installation was simple and typical of all other iOS apps. The software opened in trial mode.

The instant the mic cable was inserted into the Lightning connector on her iPhone, the software switched from trial mode to fully operational. No other setup was necessary.

NOTE: You can unlock the software to work with any mic for $4.99 as an in-app purchase.

Let me get right to the heart of it. Does the mic sound any good?

To find out, we tested it against an Tram TR-50 (MSRP $229.00, my current favorite lav, and a Sennheiser MKE-2 lav, which is their current high-end model. (MSRP $395.95). Both I and Megan did readings, so you can compare male and female voices.

The mic has a nice, present, rich sound that works especially well for female voices.

The mic clips hold the mic securely and make it easy to position the mic on the left or right lapel. (I like the Sennheiser clips better than the Tram clips, though the fabric hooks of the Tram are often invaluable.) 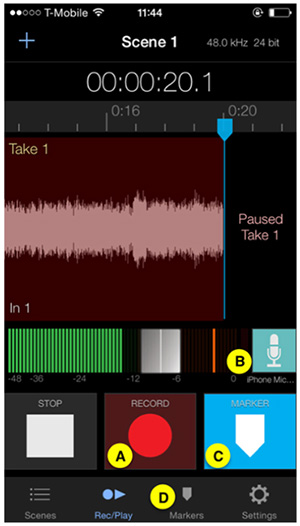 Since the folks at Apogee loaned me the unit, I should mention their software – it is really nice!

Like all users, Megan and I started recording without reading the user manual. (Um, in fact, I didn’t even know there WAS a user manual. There is and you can see the MetaRecorder User’s Guide in the Settings View by tapping Help. (The image above is from their user manual.)

NOTE: You can download a copy of the user manual here.

We discovered that our first recordings, using the default settings, were way too quiet. Boosting the record levels is easy – tap the mic icon to the right of the meters and drag the gray bar up or down to reset levels.

I prefer to record actors and narration around -12 dB. The software made that easy to both set and monitor. 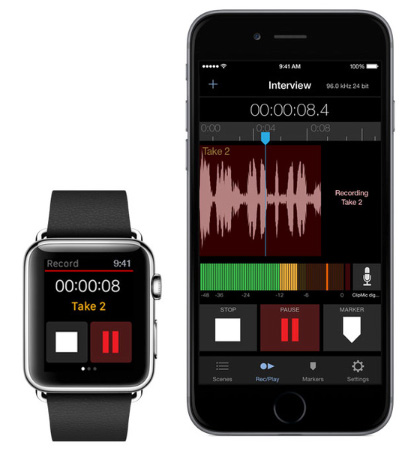 Apogee MetaRecorder has a number of useful features:

There is no requirement to use Final Cut Pro X. For our tests, we easily transferred audio files from Megan’s iPhone to my iMac and edited the audio using Adobe Audition. The screen shot above shows what a typical set of recordings look like using the default file names supplied by MetaRecorder.

NOTE: For interviews and other spoken-word recordings, I would recommend using a 48 kHz sample rate with a 24-bit depth resolution. This most easily matches with other audio elements recorded by a video camera. All current NLE audio and video software supports these specs.

Roger Robindoré, director of product evangelism for Apogee, sent me the following note after reading this review:

“Allow me to note a few additional point you may be interested in.

“For me, this makes the app much more useful, in that the recorded audio files can be automatically given very useful and concise names. The more files recorded, the more important this feature becomes.”

There are vast quantities of audio recording software available for iOS devices in the iOS Store. What makes the ClipMic attractive is that is the joint creation of two companies dedicated to professional audio quality.

The ClipMic is the equal of any other professional-grade microphone in terms of quality, ruggedness, and ease of use. It is priced competitively and delivers outstanding results. The MetaRecorder software is flexible, easy to use, and high quality.

Given this new hardware, I am no longer avoiding recording high-quality audio on an iOS device.