I’ve been thinking a lot about audio recently. In fact, I had just finished presenting a webinar on Adobe Audition when Steve Berkley over at Soundness sent me an email.

“Larry,” he wrote, “would you be interested in reviewing Sound Soap? This is an easy-to-use software solution for reducing or eliminating audio noise problems, including clicks, crackles, unwanted hiss, room noise, rumble, electrical hum, clipping, low volume, and other noise problems. It works as a standalone application or inside popular media editing software like Final Cut Pro X, Premiere CC, Audition, ProTools, Logic, GarageBand, etc. It may be of great interest to your followers.”

I’ve known about SoundSoap for years and I am always interested in cool software that fixes problems, so I told him “Yes,” and he sent me a link.

Soundsoap was originally developed by Bias, Inc. However, BIAS ceased operations in June, 2012. Soundness took over the technology previously published by Bias as well as developing new technology for themselves. However, according to the Soundness website: “Soundness does not have any announced plans to develop or publish any other software titles previously from BIAS [aside from Sound Soap]. Soundness also maintains the existing BIAS product licenses and provides limited support for existing BIAS customer licenses.”

SoundSoap lives up to its promise of simplifying the process of cleaning-up audio. While many of these tools are available in high-end audio systems (think Audition or ProTools), the approach that SoundSoap takes makes these techniques available to a much broader audience.

SoundSoap is easy to use, reasonably priced and allows everyone with a good ear to solve audio problems quickly without forcing them to understand how all the magic works.

After this review was published, Steve Berkley, from Soundness, sent the following note:

“Note the $79 Mac App Store edition is just the standalone app, and the Soundness edition includes the plug-ins too and is $149.  Unfortunately the Mac App Store doesn’t allow developers to sell audio plug-ins, just apps – hence the difference.”

SoundSoap describes itself as “Affordable Audio Cleaning for Everyone.” In this review, I looked at the stand-alone application, though plug-ins exist for all popular video and audio editing applications, as mentioned above.

Downloading and installing the software was as simple as any other app from the Mac App Store.

After opening it from my Applications folder, this screen appeared. If you downloaded this from the Mac App Store, it is activated and ready to go. If you downloaded it from the Soundness website, you’ll need to enter an activation code and register the product, which is done from within SoundSoap.

I found installation to be simple, obvious and quick. 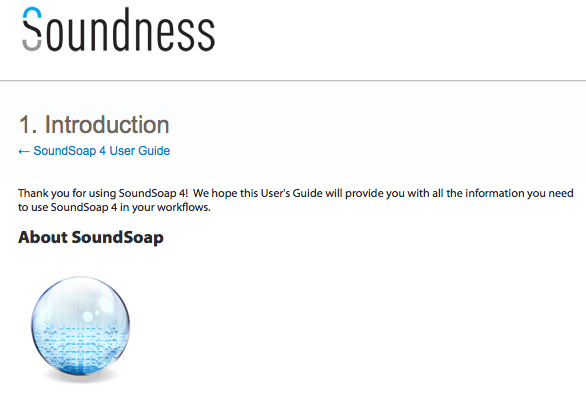 At the Welcome screen, I clicked the Quick Start button which took me to an 11-chapter web-based user guide. After skimming the first seven chapters, I decided to plunge boldly forward and start using the software.

NOTE: The User Guide is well-written in a personable tone. My only complaint is that the text is too small. Chapters are well-illustrated and short. It is also available as a PDF download. 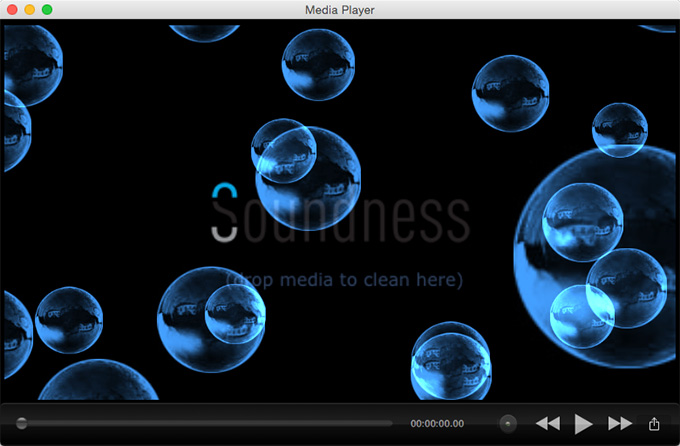 There are two windows in SoundSoap: the Media Player window, which is used for dragging and dropping files that need to be cleaned up. 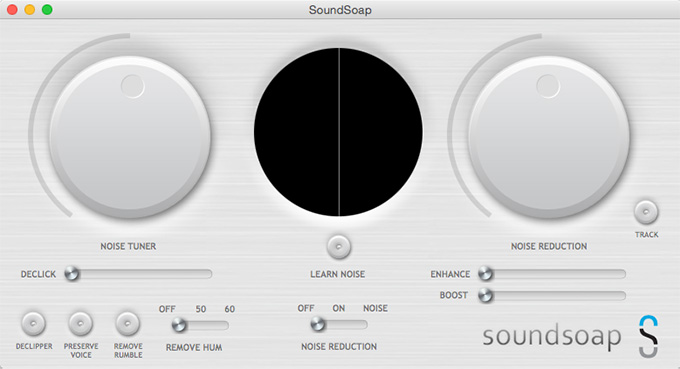 And the SoundSoap window, which contains the controls necessary to clean up your audio.

I have a lot of problem files that I’ve accumulated over the years, so let’s see how SoundSoap handles them.

First, drag either an audio or video file into the Media Player window. In this example, I’m cleaning up a file with severe hum, caused by microphone cables running too close to power cables.

NOTE: However, I discovered later that noise reduction does not have to be on for:

To remove hum, slide the Remove Hum slider to match the frequency of your AC power. In North America this is 60 cycles. The Soundness User Guide also recommends turning on the Preserve Voice setting and adjusting the Enhance slider.

As soon as I turned on Remove Hum, the hum disappeared. Adjusting the two other settings slightly improved the results. In playing the file the speaker’s voice sounded close to the original, but there were a few artifacts in the background noise created by removing the hum. The could easily be hidden by adding a bit of room tone into the final mix. 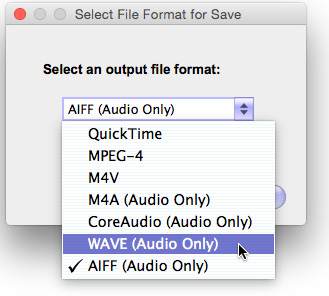 To save a cleaned-up copy of that file, choose File > Save As, select a format (for audio-only, I would recommend either WAV or AIFF), pick a name and location and save the file. 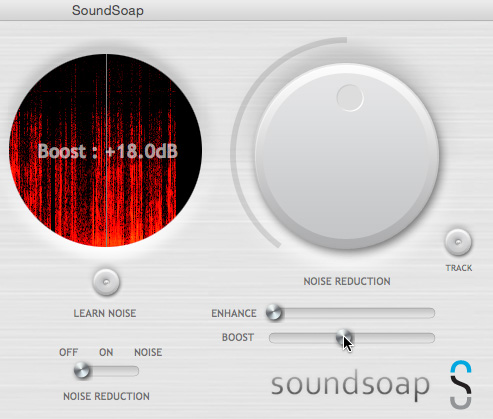 SoundSoap can improve audio levels using their “Boost Volume” setting. (In audio terms, this acts as a compressor/limiter.) The benefit to using SoundSoap is that it will be faster than booting into your video editing system, boosting volume does not cause distortion and the batch processing mode (described below) can fix all the clips contained in a single folder.

I found this setting very easy to use, though I would prefer audio meters so I be more precise in my adjustments, and the results were as pleasing as any other compressor/limiter I’ve played with. The benefit is simplicity, the disadvantage is that there are no audio meters to show you the results of your changes.

“Clipping is a form of audio distortion that occurs when the signal is overdriven beyond it’s maximum volume range, and reduces the sound quality and intelligibility of material.” (SoundSoup User Guide)

Fixing clipping is one button easy.

The top waveform shows clipping as flat tops in the waveform. The bottom waveform shows the dynamic range that was restored. This was very nicely handled and the audio difference was striking.

The next test was removing clicks. There are lots of different clicks, from cleaning up an old vinyl record to removing lip clicks from narration. In all cases, clicks are a sudden, sharp sound that stand out from the rest of the audio.

My test clip had lip clicks in it. As the clip was playing, I dragged the Declick slider until the clicks disappeared. I could not hear any degradation in the speaker’s voice as the clicks were removed.

“Noise” is a very broad term. It is best described as “all the sounds you don’t want.” This could encompass air conditioners, a baby crying, a siren, crowd noise… anything. It is impossible to expect that any application could get rid of every noise.

NOTE: For filmmakers, because we often want to keep the sound of the location, it is a better idea to look for ways to reduce the noise, rather than remove it. 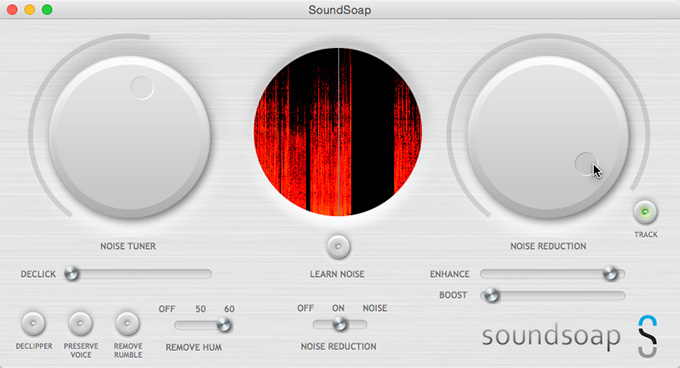 Using my noisy clip, I was able to remove some or all of the noise of a trade show crowd without doing significant damage to the speaker’s voice or hearing weird electronic “burbling” underneath. This was at least equal to the noise reduction tools in Adobe Audition. 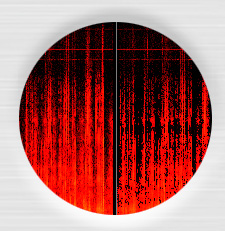 The frequency display in the central window shows a very clear “before-and-after” view of how the audio is being improved. Left of the white vertical line is “before,” while “after” is to the right.

This was very impressive. I also liked the “Noise Only” mode which allowed me to hear the noise being removed. What impressed me most was how little of the speaker’s voice was included in the noise.

SAVE AND LOAD PRESETS 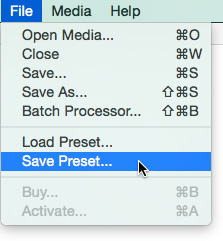 If you have a setting that you want to use more than once, you can save a preset, then load it again in the future.

SoundSoap also supports batch processing; applying the same SoundSoap setting to multiple files at once. To use this feature:

The Batch File Processor recreates the folder structure of any files or folders contained in the input folder into the output folder. If SoundSoap encounters any unsupported file types during Batch File Processing, it will skip over these files.

NOTE: Because SoundSoap is duplicating all processed files – which is an EXCELLENT idea – new files will require as much additional hard disk space as the original files.

THINGS I WISH SOUNDSOAP HAD THAT IT DOESN’T

As I was working with the program, there were four things I wish it had that it didn’t:

SoundSoap lives up to its promises of simplifying the process of cleaning up audio. While many of these tools are available in high-end audio systems (think Audition or ProTools), the approach that SoundSoap takes makes these techniques available to a much broader range of people.

The Batch Processing feature is especially valuable to filmmakers by allowing us to clean up files as a group before we start editing. And, because it always retains the original file in its native state, we can always go back to the master if we need to.