I’ve been a fan of SmartSound and its music products since I first started using them in 1997. Recently, Kevin Klingler, the CEO at SmartSound Software Inc., hired me to produce a video tutorial showing how their new Final Cut Pro X plug-in works.

I found the entire concept of this plug-in so interesting that I wanted to share it with you here. The plug-in costs $49.95 and works with the entire Smartsound music library of about 4,000 unique music clips. (Each clip has an almost infinite number of variations and durations.)

NOTE: All SmartSound music is “Royalty-Free,” this means you purchase it once and you can use it in as many projects as you want. The only thing you can’t do is sell the music separately as music files.

Final Cut Pro X has a radically different plug-in architecture than Final Cut 7 did. Consequently, all the “old ways” that allowed us to integrate music with our projects no longer work with the new version.

This is way cumbersome, but it works.

ATTUNED TO THE FUTURE

With the release of their latest Final Cut (and Premiere Pro) plug-ins, SmartSound found a better way.

Downloading the plug-in is straight-forward. I had problems with the installation, but Frank Marsilio, in SmartSound’s tech support, was able to get me running after a few emails and a phone call. (My basic difficulty was that I was integrating the network version of the plug-in and my network volume was not properly configured.)

The plug-in requires activation, which is a code you get when you purchase the app or after upgrading from the free trial. Activation is done within SonicFire itself and is easy. 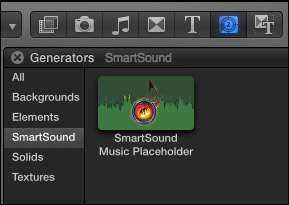 Once the plug-in is installed, a new Generator shows up in Final Cut: SmartSound Music Placeholder. 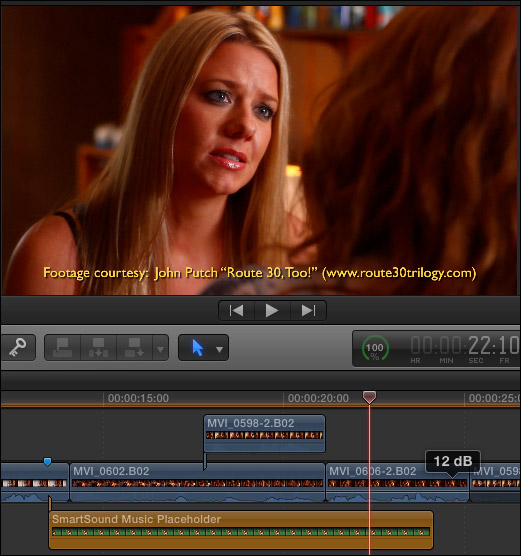 Drag the generator into the Timeline where you want to place a music cue. Here, for example, I’m adding a dramatic score to a scene from John Putch’s “Route 30, Too!” feature film. (www.route30trilogy.com). The dark orange box is the generator, which indicates where we want the music to begin and end.

Just for the record, the duration of the generator is 10:16. (We’ll come back to that number in a bit.) 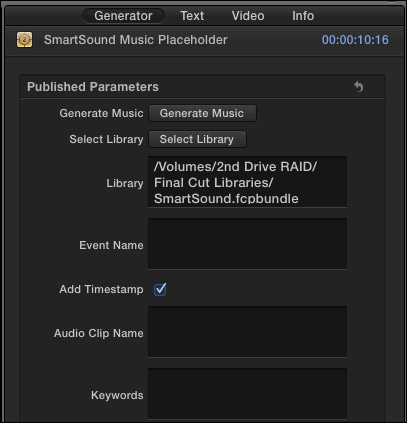 Now the magic starts. Select the generator in the Timeline and go to the Inspector. Click the Generator tab.

By default, SonicFire places all its music in a separate library called “SmartSound.” However, when you click the Select Library button, you can specify the Final Cut library where you want SonicFire to store its music. I prefer to store music in the same library as the rest of my project, which is how I’ve set this here.

You can also add an Event name, time-stamp, rename the audio files and add keywords; which is especially useful for tracking the multiple music cues used in a large project.

Once you are happy with the settings, click Generate Music.

NOTE: While Final Cut can start SonicFire when you click this button, my results were more reliable when I had both SonicFire and Final Cut running before clicking this button. 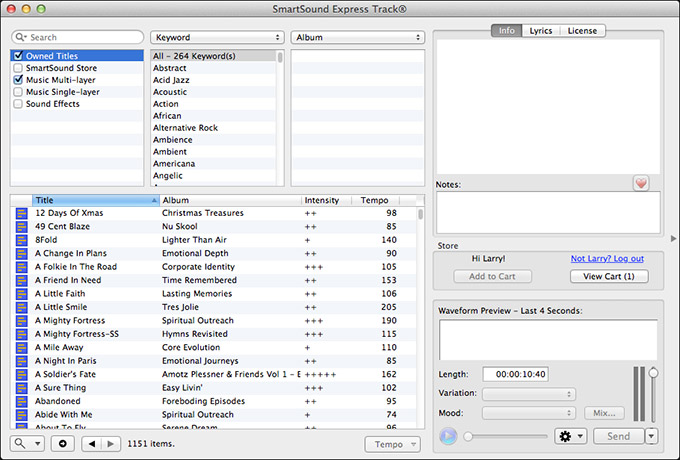 This instantly switches from Final Cut to the Express Track window in SonicFire.

NOTE: You may have noticed that the Length is 10:40, which doesn’t match the duration of the Final Cut generator. Good catch! 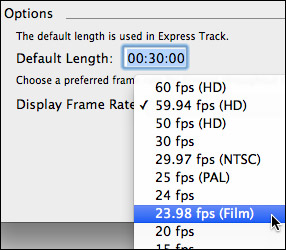 In point of fact, since AIF and WAV audio doesn’t have a frame rate or timecode, this setting isn’t really relevant, because the audio will be correct regardless of the frame rate setting; but I knew you’d ask, so I wanted to explain it as long as I was here.

Finding the right music for your project could fill a small book, but SonicFire makes it easy. 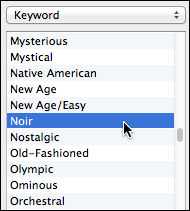 Select a keyword the describes the style music you want.

Select an intensity level from laid-back to in-your-face.

NOTE: SonicFire ships with five music clips. You can purchase individual clips directly from within Express Track, or entire albums, or the entire music library which is close to 4,000 clips and growing every month. And, as I mentioned at the beginning, all music is royalty-free.

For me, the biggest benefit to working with SonicFire is its ability create, from that one selected music clip, a music cue that is exactly the duration I specified, containing a smoothly-flowing beginning, middle and end.

It also offers multiple variations on that theme, so I can select the one that best matches the feeling I’m going after. 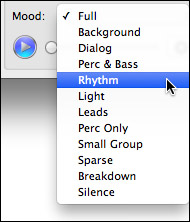 It even offers the ability to remix the instrumentation – what SmartSound calls “Mood Mapping” – to have it better fit with my mix.

Back in the dark ages of video, I edited music by hand to get it to fit to time, but the speed SonicFire provides at creating perfectly timed clips is just amazing. So much so that my music editing skills have atrophied from lack of use.

When you find a clip that you like, click the Send button in the lower-right corner. This exports the file from SonicFire into the library you specified in Final Cut.

Drag the music cue from the Browser directly on top of the generator placeholder in the Timeline and select “Replace.”

NOTE: If you are trying to decide between several music cues, build them into an Audition, which makes it easy to experiment with different audio clips.

When you’re done, the generator is replaced with a music cue that perfectly matches what you want to do.

There are two cautions to using this program:

Because of the way Final Cut handles imported media that doesn’t use the Media Import window, you MUST set your import preference settings to “Copy files” before importing media. Otherwise, you risk losing your imported music the next time you restart your Mac.

Here’s an article I’ve written that explains this in more detail.

Music drives the viewer’s emotions. Having the right music, at the right time, for the right duration makes all the difference in the impact your project will have on an audience. I’ve been impressed with Smartsound’s efforts to make music accessible to video editors. With their latest plug-in, they made their music more flexible and convenient than ever.

I continue to recommend SmartSound to any editor looking to add high-quality, customizable music to their projects.