This week, I’ve had the pleasure of working with two different SSD drives; one from Promise Technology and the other from OWC.

NOTE: You can read my OWC review here. 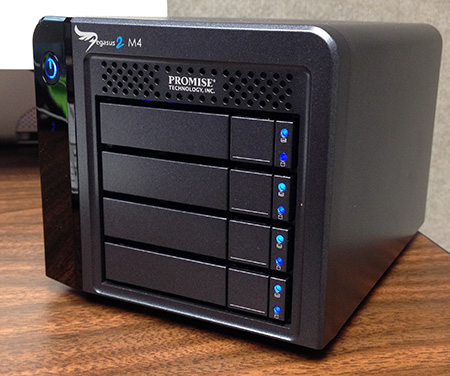 The Promise Pegasus 2 M4 is a small, 4-bay RAID that can be configured with either SSD or standard hard disks. The Pegasus 2 family of RAIDs “offers creative enthusiasts and professionals portable RAID storage for post-production and broadcasting, such as offsite shoots, remote studios, or department workgroups.” (Promise website)

The M4 is designed for portability and, when equipped with SSD drives, serious performance. Using the included Promise Utility, the system can be configured as RAID 0, 1, 5, 6, or 10. Sporting two Thunderbolt 2 ports, it can store up to 4 TB using standard hard drives, or 2 TB using SSD drives. It weighs less than six pounds, is about the size of two coffee mugs, and comes with a 2-year warranty.

If you are looking for something small, light, really fast, and reliable, this is the drive to consider. However, the Promise website highlights data rates exceeding 1300 MB/second. I was not able to come even close to that.

Since I had both the Promise and OWC units here, I thought it would be interesting to compare the two for size. (The Promise is on the left.) The Promise is about an inch wider. 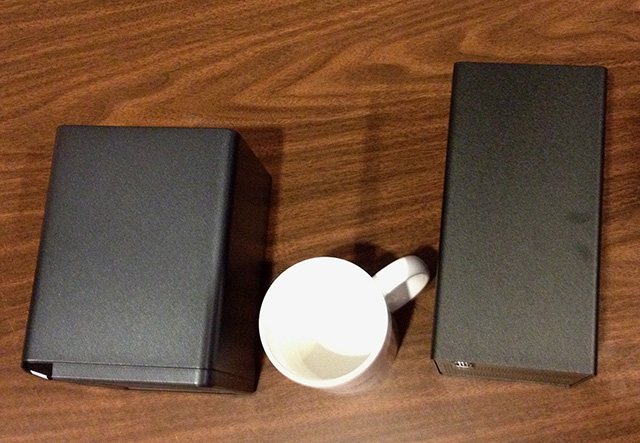 But it is also about an inch-and-a-half less deep. 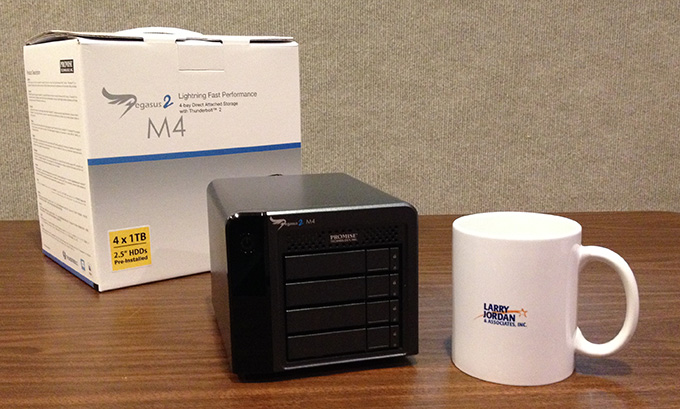 The M4 ships in a nice box and, when unpacked, compares favorably to the size of a coffee mug. 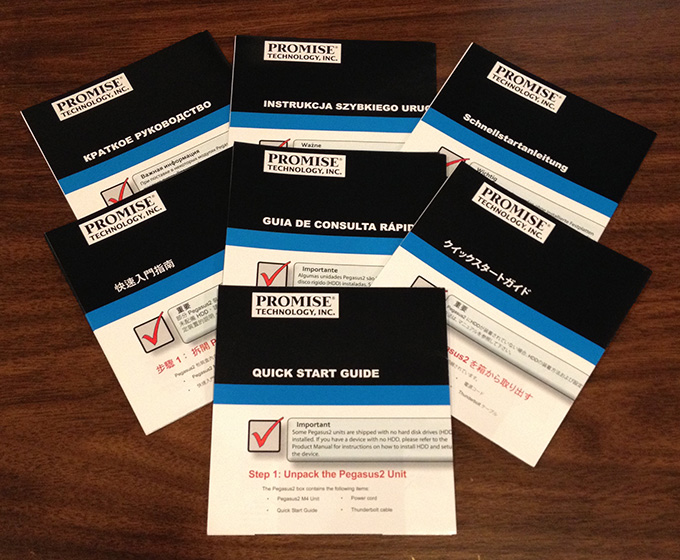 It ships with Quick Start Guides in around 14 languages. 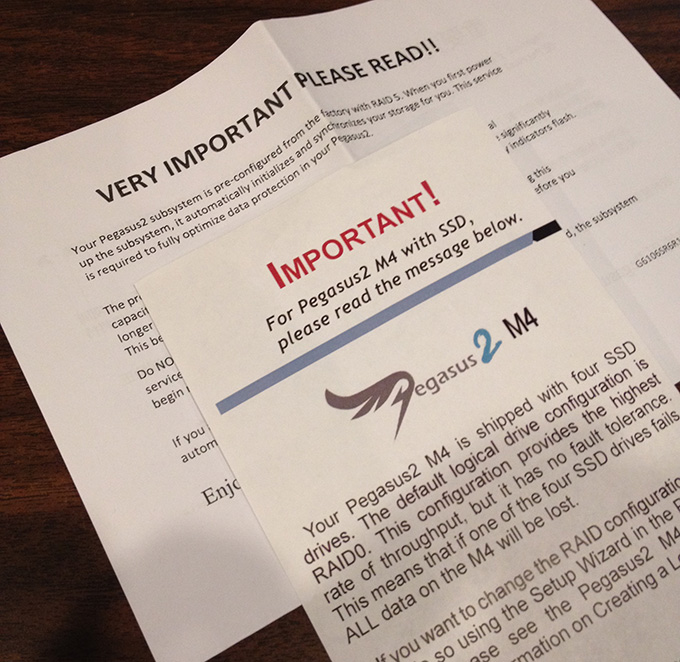 In fact, neither of these two sheets of paper are correct. The unit that I received was configured as a RAID 5 and was ready to go out of the box.

The Quick Start Guides are nice. The two warnings, however, are REALLY confusing!

While the RAID arrives configured as a RAID 5, Promise also ships a free utility: “Promise Utility” that you use to configure the RAID as needed. 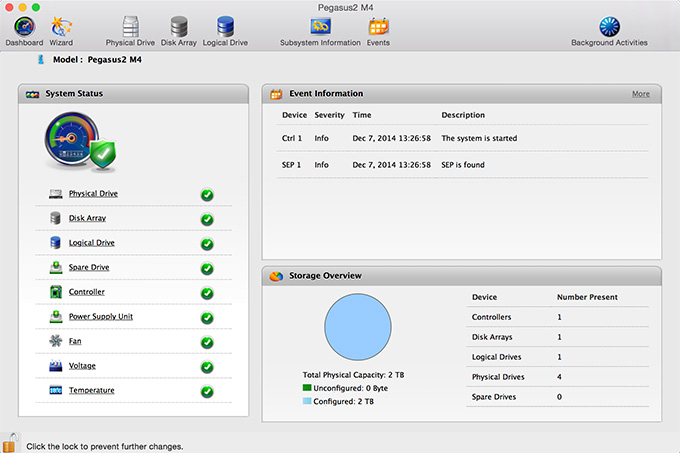 System monitoring and configuration starts with the Dashboard.

Drives are inspected and formatted in the Physical Drive List panel.

And RAIDs are built using the Logical Drive panel.

Be sure to read the documentation that comes with this utility before using it. If you don’t know what you are doing and don’t pay attention, you can really mess this system up. 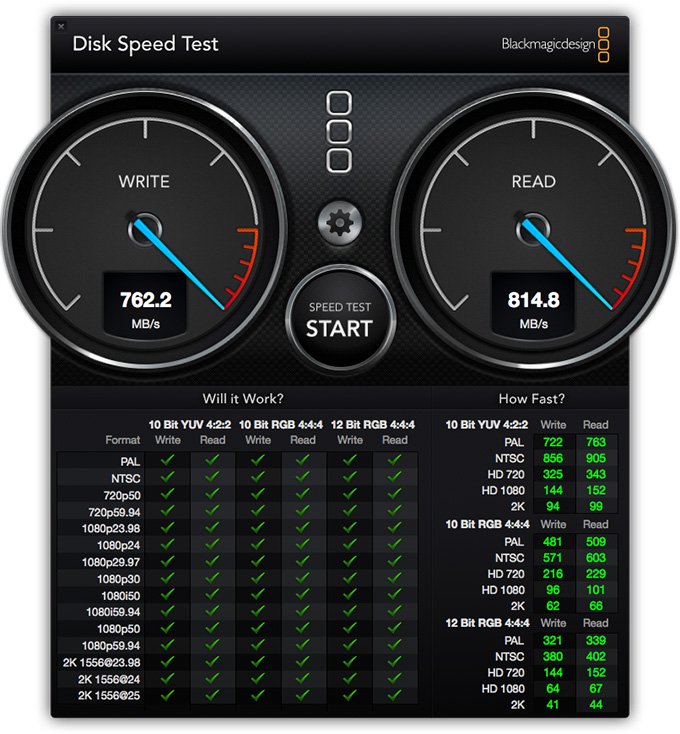 When configured as a RAID 0, which provides the fastest performance, but with no data redundancy, the system delivers amazing speed for a four-bay unit. Unlike the OWC SSD, which uses a software RAID controller, the Promise M4 uses a hardware RAID controller. You can see the difference between them in these numbers.

The green checkboxes indicate which video formats this unit is fast enough to support. In RAID 0, the M4 will support just about anything you care to edit. In RAID 5 (below), it supports virtually every video format except writing high-bit-rate, high-frame-rate formats. 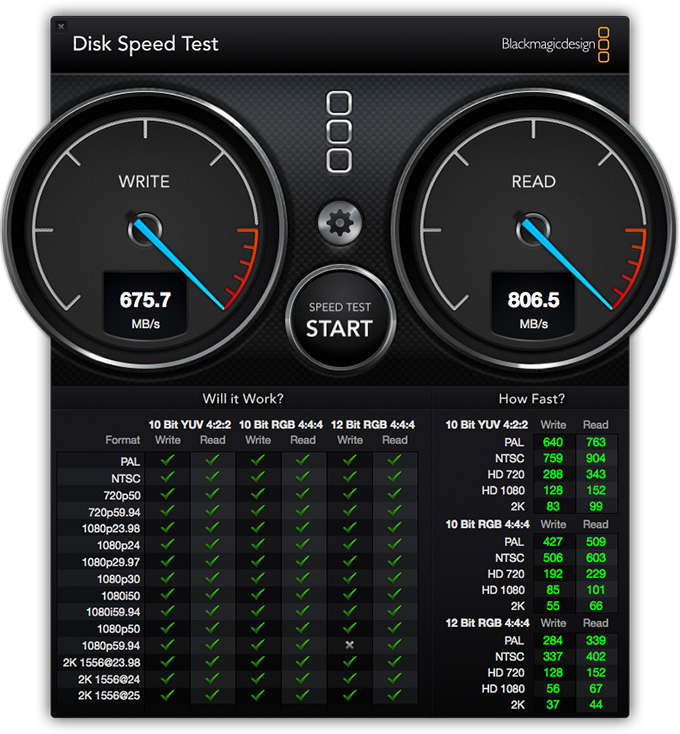 When configured as a RAID 5, performance drops – as you’d expect – but still delivers very respectable numbers.

My recommendation, when using RAIDs, is to configure them as RAID 5. (Other readers suggest RAID 10 and RAID 6 may offer more protection. And, while I agree with their arguments, I’m not willing to accept the greater cost (RAID 10) or slower performance (RAID 6) for editing systems.)

Since I had both the OWC and Promise systems, I copied 450 GB between them. I’ll be truthful, speeds like this make me grin. Yes, there are faster RAID systems out there, but not at this price.

For me, the real test of performance is not the raw speed numbers, but how it handles multicam editing. (I did this testing with the unit configured as a RAID 5.)

For this first test, I built a 16 camera multicam whose clips all used the XDCAM EX format. Since FCP edits this format natively, no media optimization was used.

As you can see, the data load of around 70 MB was easily handled by the M4.

Next, I created an eight-camera multicam clip using ProRes 4444. This is a very heavy format, generating massive files and choking smaller storage systems.

However, during playback, the system easily handled the 280 MB/second load. While more camera streams would increase this the data load, most cameras shoot ProRes 422, which generates much smaller files and are thus easier to handle because their data needs are lower.

In other words, for single camera or multicam editing, the M4 has performance to spare for almost all video formats 2K and below.

The Promise Pegasus2 M4 RAID is a tremendous performer. It is extremely fast, but like all SSD drives, with very limited storage capacity.

If speed, light weight and ruggedness are more important to you than storage capacity, the Pegasus2 M4 needs to be on your short list of drives to consider.