OWC describes the Mercury Pro U.2 Dual as a “dual bay Thunderbolt storage solution with up to 8 NVMe M.2 SSDs that’s ideal for [tasks from] routine backups to high-bandwidth pro creative uses.”

OWC loaned me a 16 TB unit for a few days to review. It is unquestionably really, really fast. But there are some elements that still need work. 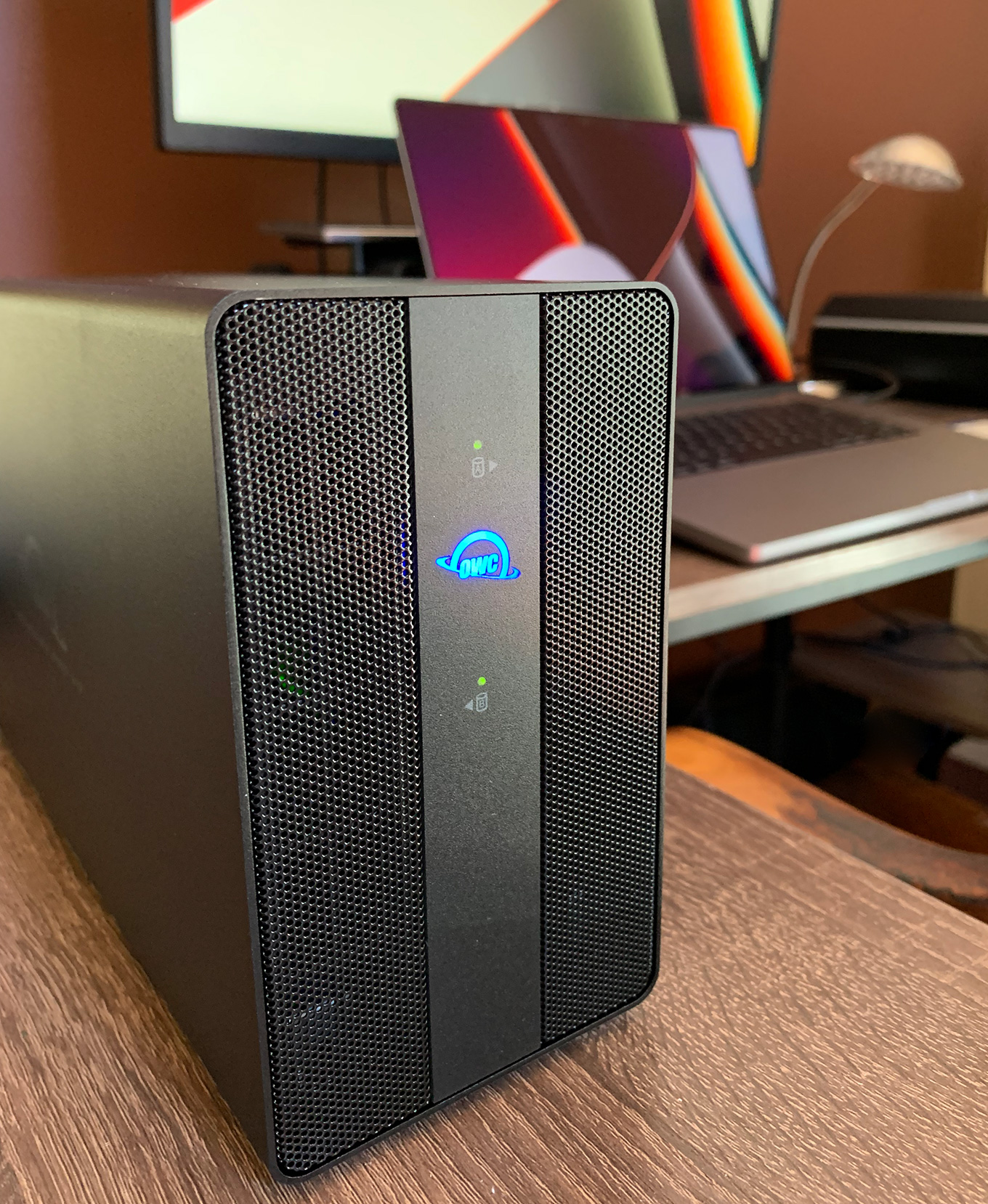 The OWC Mercury Pro U.2 is an NVMe SSD-based RAID designed to deliver the highest-possible storage speeds via Thunderbolt 3/4. With capacities that range from an empty enclosure into which you put your own SSDs to 64 TB, this unit also seeks to provide storage capacities that, in the past, required spinning hard disks.

NOTE: Because there are no moving parts, the unit is very quiet. The only sound comes from its relatively low-speed fan.

The good news is that this unit lives up to its name for speed. While we could not match the speed specs listed on the OWC website, this puppy is really, really fast. It easily supports 4K media and beyond. Equally worthy is that if you have a Mac, all you need to do is connect the drive. All formatting is done in the factory. The unit shows up on your desktop, ready to fly.

NOTE: OWC says this unit fully supports Windows 10 or later, but I don’t have a Windows system to test it on. On the Mac side, this requires macOS 10.13 or later.

The bad news is that documentation on the unit is inaccurate or incomplete, reformatting is impossible and using the right Thunderbolt cable is critical.

The OWC Mercury Pro U.2 Dual RAID has speed to burn – as long as you don’t want to tweak. 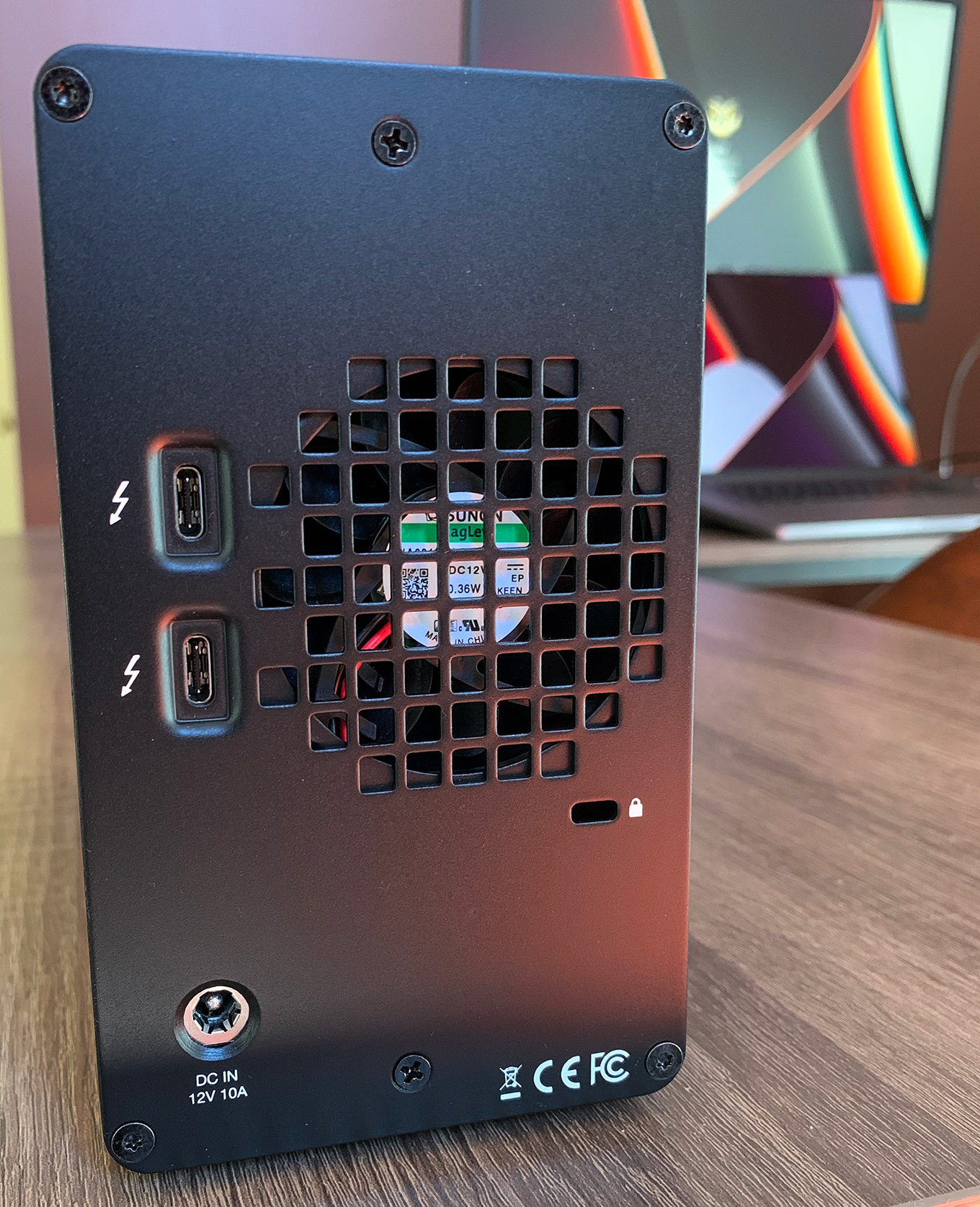 The unit ships with the RAID itself, a power cable and a Thunderbolt 3/4 cable. Connect the two cables and you’re done. It comes pre-formatted. The RAID provides two Thunderbolt ports so  you can connect other devices to this one.

There’s a printed Quick Start card shipped in the box, if you need basic setup help.

As soon as the U.2 senses an active computer connection it turns on and a blue light glows on the front of the unit. (When you shut your computer down, this unit shuts down too.)

NOTE: As with all storage devices be SURE to eject it before powering down your computer.

Like any other storage device, the U.2 shows up on your desktop and you copy files to and from it. Performance will vary depending upon the computer system you have it attached to and how you measure the speed. 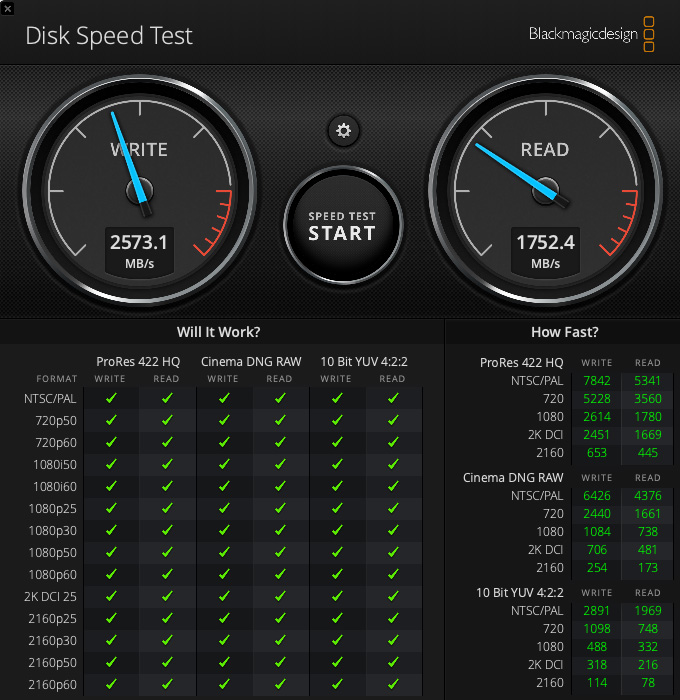 For those that just want a quick answer, as you can see from this Blackmagic Design Disk Speed Test, the U.2 connected to an 16″ MacBook Pro with an M1 Pro CPU easily supports all listed frame sizes and codecs. While this test doesn’t go to 4K, extrapolating from the ProRes numbers, we could expect this device to support:

NOTE: At the end of this article is a table listing all my test results. I ran each test multiple times. 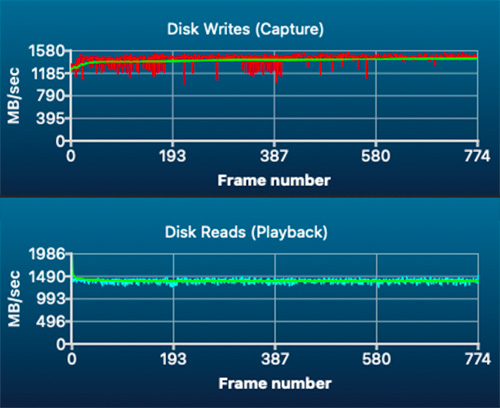 However, using AJA System Test Lite, test results were lower, but still darn fast. The U.2 connected to the MacBook Pro averaged 1,550 MB/s write and 1396 MB/s read. It is interesting to note how smoothly the system handles reads with very little change in speed, while writes are a bit more choppy.

Just for comparison, I connected a Samsung T-5 SSD. It “only” delivers roughly 400 MB/second both reading and writing; 4 – 6 times slower than the U.2.

NOTE: However, I discovered that the Samsung is about 25% faster on the iMac than the MacBook Pro. I have no idea why. Either way, it is way slower than the U.2.

So, from a plug-and-play perspective, you will be very happy with the speeds this U.2 RAID can deliver on whatever system you own.

WHERE THINGS GOT WEIRD

I decided to test speeds on both a new MacBook Pro with an M1 Pro processor and a 2017 27″ iMac. Using the Blackmagic tests, both computers had the same read speeds, but the M1 was 30% faster with writes.

Using the AJA tests, though, the M1 was about 11% slower in writes and 17% slower in reads when compared to the iMac. I have no idea why, except, obviously, the two softwares use different algorithms to test speeds.

Also, when I moved the U.2 from the MacBook Pro to the iMac, I decided (because I was lazy) to use the Thunderbolt cable that came with the Samsung drive. The U.2 would not mount. It DID mount when I used the cable that OWC shipped with it.

So, it is imperative that you label the black Thunderbolt cable that OWC ships with the unit to make sure your system will run properly. Don’t assume that “any old Thunderbolt cable” will do. It won’t.

In another weirdness, the User Manual for the U.2 referenced the ThunderBay Flex 8 in at least two places. While not a live-threatening mistake, it was a harbinger of the confusion to come.

WHERE I, uh, BROKE THE UNIT

The User Manual states: “In order to get the best performance from your installed SSDs you can use SoftRAID from OWC to RAID two or more installed drives together into a RAID 0 “Striped” volume. To learn more about SoftRAID please visit: www.softraid.com”

Well, I certainly wanted the best performance and I am a big fan of SoftRAID. I’ve used it for years on all my spinning media RAIDs. It is fast, powerful and reliable. But, it only recently started supporting APFS (Apple’s new file system) storage.

NOTE: If you are thinking that at this point I should have taken this as a sign, you would be right. But… I didn’t.

So, since I owned the latest version of SoftRAID (6.2, which supports APFS), I decided to reformat the U.2 using SoftRAID. This was a mistake. The manual was, I suspect, referring to two separate hardware units, not the two drives bundled in the U.2 itself.

SoftRAID has a protection on all RAIDs it creates called “SafeGuard.” This prevents a RAID from getting accidentally erased. In order to reformat a RAID, SafeGuard must be disabled. And, in the current 6.2 version, it is impossible to disable SafeGuard for the U.2.

So, I could – and did – erase the two internal drives that made up the U.2 using Apple Disk Utility, only to discover that I couldn’t turn off SafeGuard in SoftRAID. The drives were fine, but the RAID was dead.

Sigh… I killed it.

NOTE: The two SSD drives inside the U.2 did show up as separate drives on my desktop.  I measured their speed and each delivered 1,188 MB/s write and 1,282 MB/s read. Even as separate drives, they are really fast.

But, there was no way to reformat these two drives into a RAID using SoftRAID, because at no time would SoftRAID allow SafeGuard to be disabled. And without disabling SafeGuard, disks can’t be reformatted or RAIDs rebuilt.

Because all black Thunderbolt 3/4 cables look alike, please do something different with your cables so that we can be sure we are using the right cable with your gear. It is too easy to lose a label wrapped around the cable.

Please provide clearer links to specific documentation on how to format and optimize this unit.

Please be clearer in your User Guide about when SoftRAID is necessary and the benefits it provides. I suspect that performance would not improve unless I were RAIDing multiple hardware units, but the language is very unclear.

Please allow SafeGuard to be disabled for APFS volumes, or provide clearer instructions on why it can’t.

And, um, please accept my apologies for breaking your new storage system. 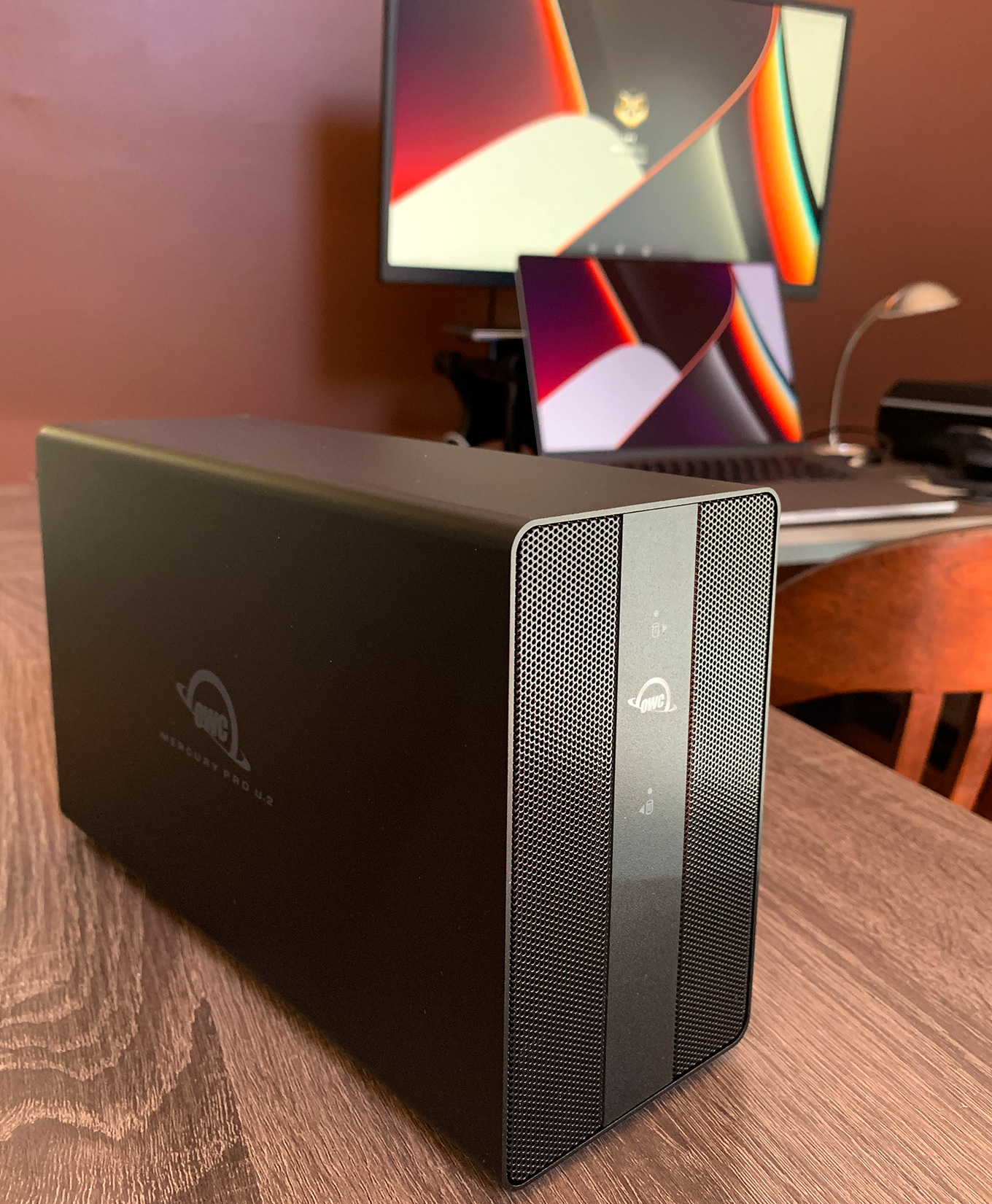 OWC makes great stuff. I’m a longtime fan. If you use this unit as a plug-and-play device it will meet your needs, work reliably and deliver exceptional performance. On a MacBook Pro, write speeds approach the theoretical limits of Thunderbolt. Read speeds are slower but still blow the doors off most external units.

Like all NVMe systems, the underlying storage technology is not cheap. You are paying a premium for high-capacity, high-speed storage. The best way to use this unit is to copy current projects to it for editing, then move them to slower servers or spinning hard disks for long-term storage. (Storage geeks call this “Tiered storage.”)

The OWC Mercury Pro U.2 Dual provides extremely fast, high-capacity storage that’s essential for many creative workflows today. It is overkill as a replacement for traditional storage both in terms of price and capacity. But for those with a need for speed, the U.2 will make your heart beat faster. 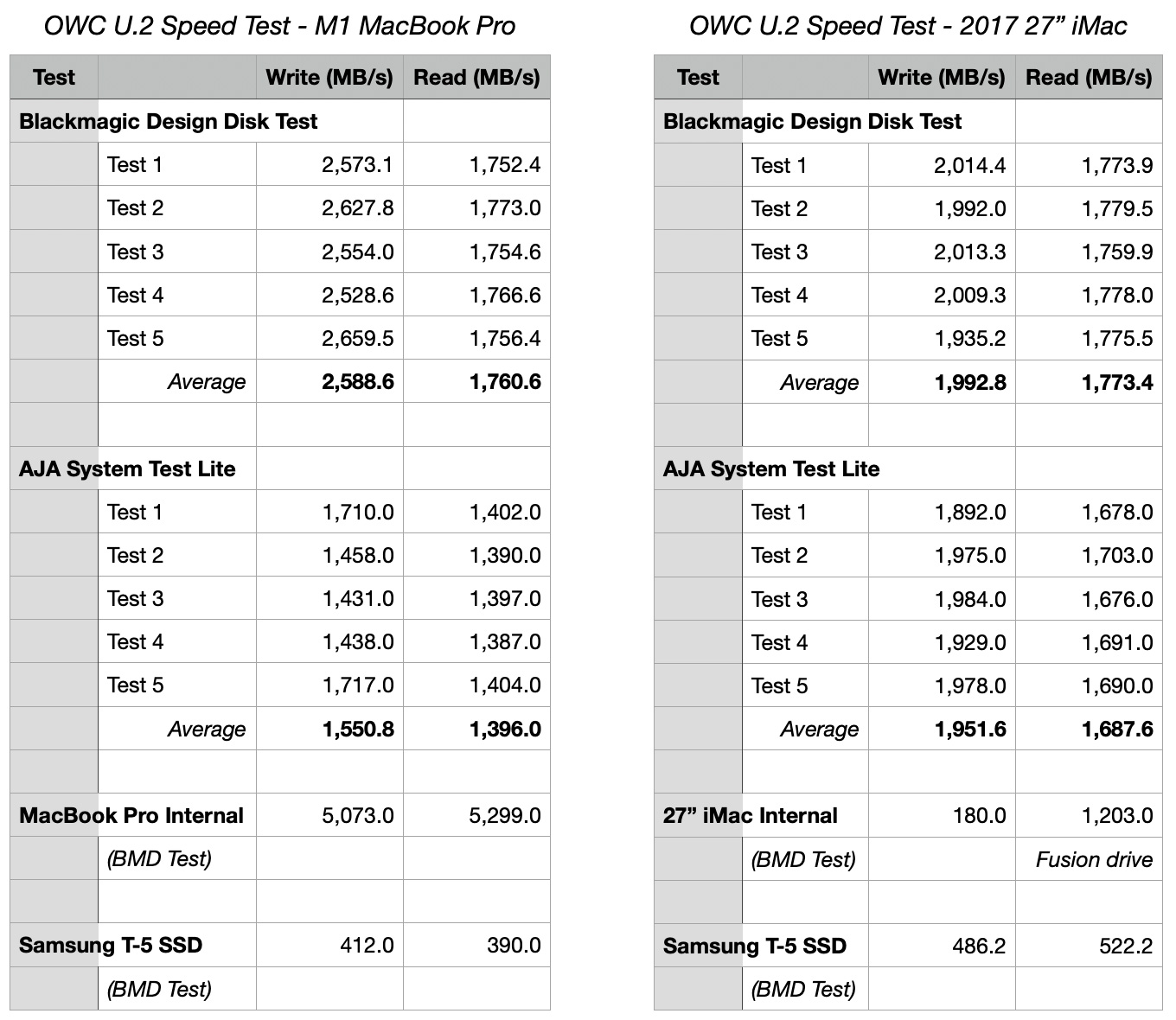