The folks at OWC asked me recently if I’d be interested in looking at their new OWC Mercury Elite Pro Dual storage system. First, I laughed, then I said yes. Why? Because there’s a story here.

NOTE: OWC has been a past sponsor for our Digital Production Buzz podcast. They loaned me a unit for two weeks for this review.

I reviewed the Thunderbolt 2 version. 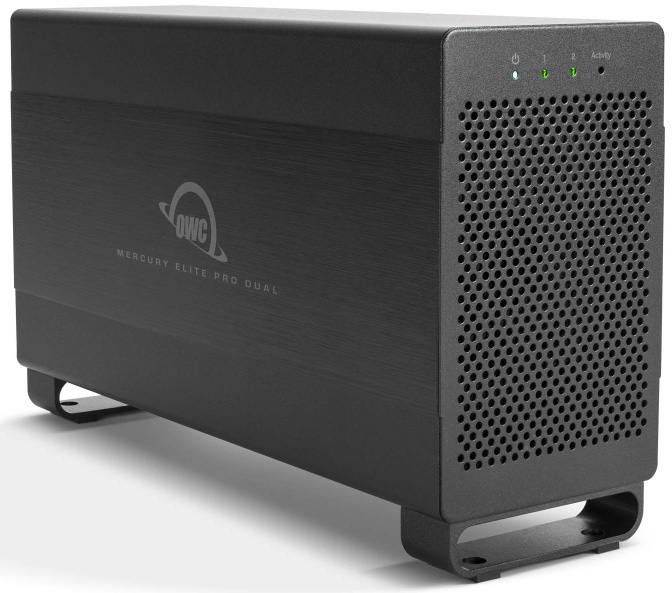 The OWC Mercury Elite Pro Dual joins other OWC storage units in providing high-capacity, affordable storage that comes in a range of configurations and storage capacities from 2 TB to 20 TB.

The RAID holds two hard drives (either SSD or spinning media) and comes with software for initial installation, a detailed 11-page PDF User Guide; along with power, USB and Thunderbolt cables. There’s no power switch.

The RAID has four different configurations – the default setting is RAID 0 – all controlled from a rotating switch on the back:

The Mercury Elite is quiet, petite, and fast. Setup took about two minutes, and once set up, it works like every other hard disk. I’ve purchased a lot of OWC storage and, with one exception, I’ve never had a problem with it. (The story behind the exception is below.) If you are looking for affordable storage with the performance for media editing, this unit is tough to beat.

I’ve had my eye on the Mercury Elite Pro Dual series for a couple of months because, though I have about eight OWC RAIDs attached to various computers here at the office, I needed a smaller unit, both in size and capacity, to be our main storage for all our NAB podcasts this year.

So, I bought the 4 TB SSD version. It arrived about two weeks before NAB, which gave me time to test and configure it.

To make a long story short, it arrived dead. This gave me my first opportunity to work with OWC tech support as a customer. The two of us spent a couple of hours trying to get the unit to work, but no-go. I was impressed, though, with his helpful attitude and willingness to dig in to solve the problem.

Ultimately, though, we made the decision to send the unit back for replacement. The RMA was processed promptly, but, they were out-of-stock on the unit I needed. So, my hopes of using this as part of our NAB coverage came up short.

Which is why I laughed when OWC asked if I wanted to review the unit. Yup. Sure did. Thanks.

When the drive boots up, the OWC Setup icon appears on the Desktop. The drive needs to be initialized before you can use it, because it can support either the Windows or Mac operating systems. 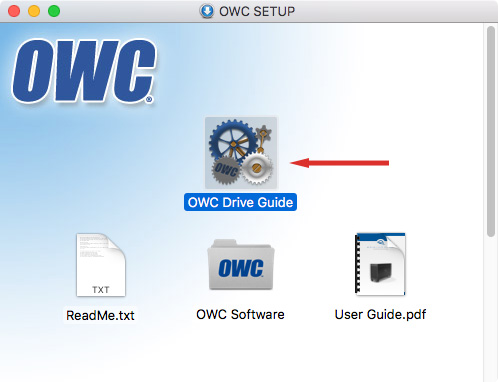 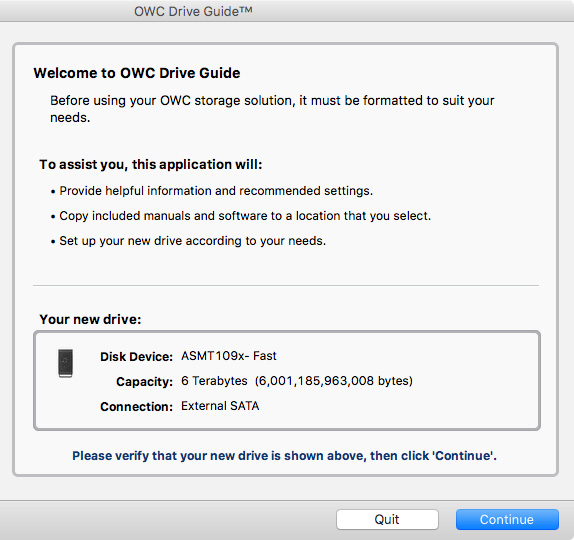 At this point, a series of seven screens walks you through the entire setup process simply and easily. 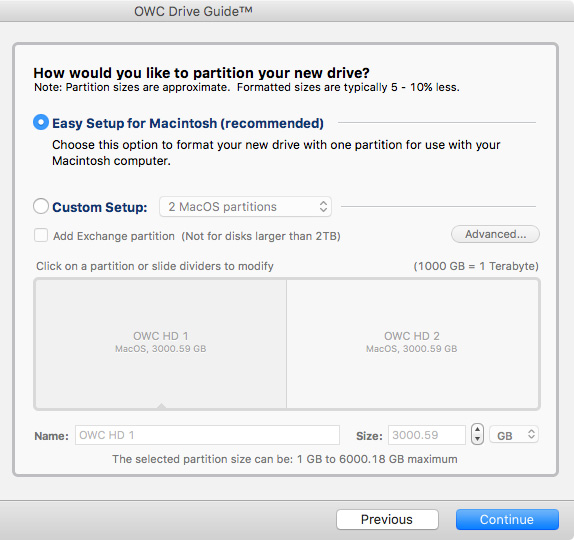 This is probably the most important screen, allowing you to configure the drive. In general, the default setting is best, though you can create partitions if you need do.

NOTE: Given the speed of this drive there’s no real benefit to creating partitions. I recommend staying with the default; which is a single partition. 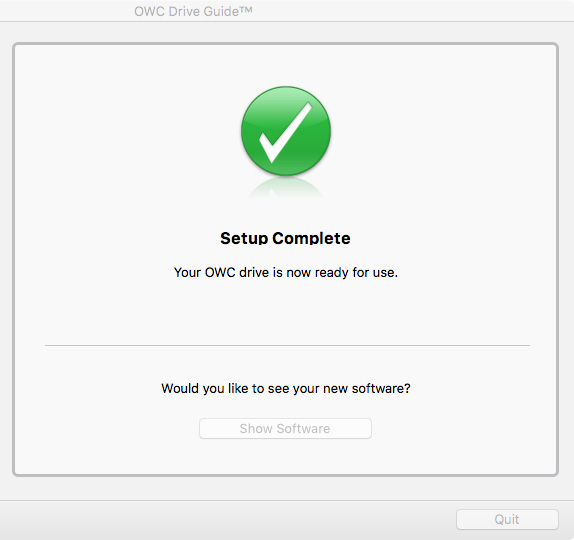 Once installation is complete, the drive is ready to use.

Although the default setting is RAID 0, which provides the fastest performance, changing configurations is done using a rotating switch on the back.

BIG NOTE: Changing RAID settings erases all your data. Be sure to back-up your data first.

According to the User Manual, here’s how to change the configuration:

NOTE: I was able to successfully reformat the RAID into all its different configurations, but pressing the Set button for any amount of time never made the front lights blink. After a few attempts, I just ignored it. Reformatting still worked. 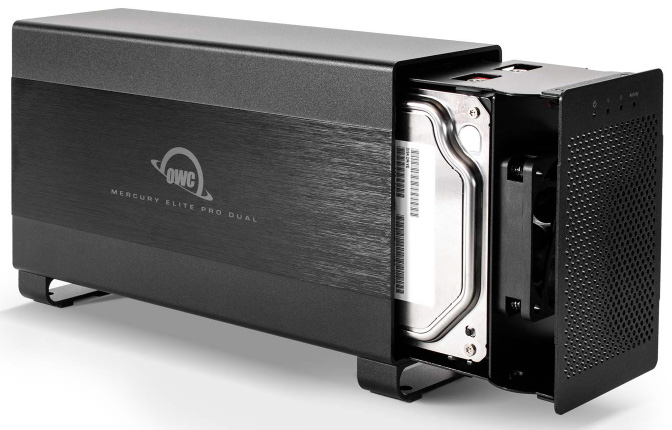 Here’s what the four RAID modes represent (from the OWC User Manual):

RAID 0 “Drive Striping” Mode
The two drives show up as a single large disk with a size equal to the combined capacities of both drives. RAID 0 is used when speed is the primary objective; it does not provide data redundancy for protection. The reading and writing of data files is spread across both drives to gain speed by distributing the workload. This allows for the fastest data transfer rates, but if one drive fails the whole array becomes corrupted. The data will be lost.

RAID 1 “Drive Mirroring” Mode
The two drives show up as a single disk with a size equal to the capacity of a single drive from the array. RAID 1 copies (or “mirrors”) the data from the first drive to the second drive. This is useful when reliability and redundancy are more important than capacity or maximum speed. When one drive fails, it can be replaced and the data can be rebuilt automatically from the other functioning drive.

Span Mode
A Span is an array (but not a RAID) in which the data is written sequentially across the drives. When one drive becomes full, subsequent data is written to the second drive. This combines the capacities of the drives, but it does not provide any performance or data redundancy benefits. The total size will depend on the drives installed; unlike RAID 0 or RAID 1 you can use drives of different capacities.

Independent Drive Mode
Each drive will appear individually without being combined. If you are using drives of differing capacity and model, or if you are using only one drive, this is the mode to use. 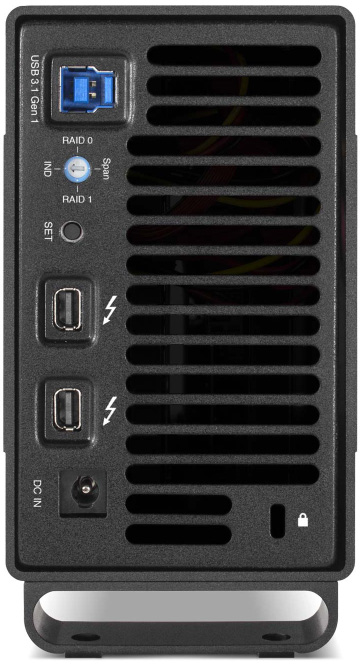 If your computer supports it, always use Thunderbolt or eSATA. USB 3.1 Gen 1 (the renamed USB 3.0) is fine for data backups, but not media editing. FireWire 800 is faster than USB, but far, far slower than either eSATA or Thunderbolt.

Also, these tests were made using spinning media. An SSD Drive will be about twice as fast, but only ships in the 4 TB size.

The OWC Mercury Elite Pro Dual uses a hardware RAID controller, which means no other software is required for installation than either the OWC Setup Guide or Disk Utility. This unit shipped with two Toshiba 3 TB drives. 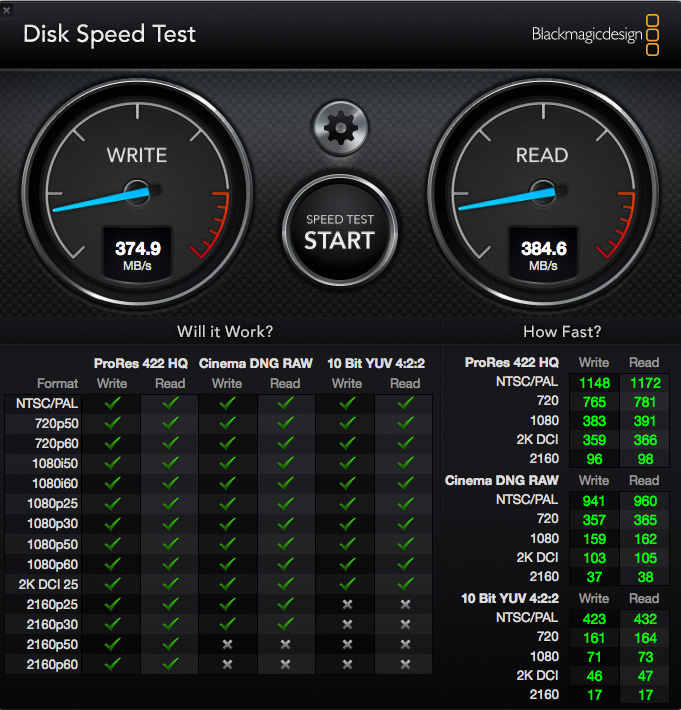 Speeds approaching 400 MB/sec are totally reasonable for virtually all SD or HD editing. Even HD multicam should work fine for four or fewer cameras. I would recommend using the  big brother to this unit – the Thunderbay 4 – for editing video with higher resolution, greater than 10-bit depth resolution or multicams with more than four cameras.

As an additional real-world test, I also copied a 95 GB file from a 4-drive RAID to this unit. Transfer speeds exceeded 400 MB/sec. Totally acceptable for editing work today.

RAID 1 duplicates your data automatically between the two drives inside the unit. As you would expect, rates are about half that of RAID 0, but all data is fully redundant (duplicated).

What surprised me here was the significant speed of these drive. I would normally expect results around 120 MB/sec. Toshiba and OWC have put some rockets in here! These are the fastest speeds for a non-SSD spinning media drive that I’ve ever measured.

What’s also interesting is that the spanned (and independent) drive speeds are faster than RAID 1. I did not expect that.

NOTE: The first time I reformatted the drive as spanned, the formatting failed. The second attempt worked fine.

Again, these are REALLY fast speeds for a single drive! Formatting these as independent drives means that there are two drive icons on the desktop, one for each drive inside the unit. This style of formatting is often used in audio recording and mixing.

LEARN MORE ABOUT THE TECH

One of the things I enjoy about writing these reviews is chatting with the developers to learn more about the product and why they created it. So, I sent the following questions to the engineering team at OWC. Here are their answers.

Larry: Why should someone consider the Mercury Elite Pro Dual system, when the ThunderBay 4 RAID exists?

OWC: There are a couple different reasons for this, but the main one is going to be what a user intends the unit to be for. The Dual can be faster in a RAID 0 for video and photo work. In addition, there is no software “bloatware” that the ThunderBay has, given that it’s a hardware RAID. It’s also physically a smaller unit, given that it’s two drives instead of four.

Larry: What is the performance difference between the Thunderbolt, eSATA, and USB versions of this product?

OWC: The performance difference is going to be the data transfer speeds that each connection can provide. USB is 5 Gb/s, eSATA is 6 Gb/s, and Thunderbolt 2 is 20 Gb/s. Of course, you’re still limited to how fast the drives can go, but you have more possibilities with Thunderbolt. Also, you have to consider that eSATA is slowly becoming obsolete, so Thunderbolt is going to be your best option.

Larry notes: Not all ports on Macintosh computers support the full speed of USB 3.1 Gen 1.

Larry: Are the only differences between the Thunderbolt units their storage capacity?

OWC: Yes. We’ve got a GREAT blog article that goes into a lot of detail on all things USB (in case you’re interested) here: https://blog.macsales.com/34406-tech-101-the-history-of-usb-its-not-quite-as-simple-as-1-2-3

Larry: If performance is your objective, should you use the USB port?

OWC: It depends on what kind of drives you are using. If you’re using standard hard drives, you won’t be able to see much faster than 200 MB/s, so you’ll get the same performance out of USB as you would out of Thunderbolt. That being said, you can also purchase a unit empty and install your own SSDs, which would then give you significantly faster speeds where Thunderbolt would be your better option.

Larry: If you have the system configured as a SPAN and one of the drives dies, do you lose all of your data?

Larry: Does this use a hardware or software RAID controller, and why did you choose that option?

Larry: Does Apple’s move to a new filing system – APFS – make a difference in the storage hardware that we buy now?

OWC: No, because that formatting is done through the OS and happens on the back end of things, so it will work the same no matter what kind of drive/hardware that you use.

Larry: One of the configurations of the Mercury Elite Pro is a two-drive SSD RAID. Are RAIDS even relevant when using SSD drives?

OWC: It’s still relevant to have something like a mirrored RAID [i.e. a RAID 1] as a backup because while they last a very long time, [SSDs] can still fail (and fail suddenly)! No matter what kind of drive you’re using, if you value the data on it a backup will always be relevant.

If you’re asking in regards to speed, if you are using SSDs connected over Thunderbolt 2 and you have it in a striped RAID [i.e. RAID 0], it’s easily still relevant because you can see speeds significantly higher than two Hard Drives or even one SSD!

OWC makes nice gear. They have good tech support. When you need to add more storage to your system, the OWC Mercury Elite Pro Dual is an excellent choice when you need a smaller unit or don’t need the extra speed provided by a four-drive RAID. The small glitches I discovered during reformatting are not significant and don’t affect the performance of the unit during regular operation.