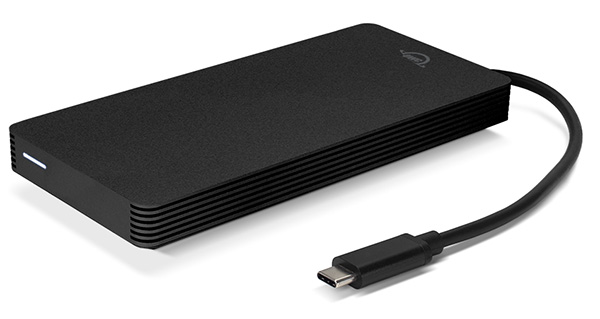 The OWC Envoy Pro EX portable SSD drive is really fast, really portable and really well-built. This bus-powered device requires Thunderbolt 3 and a relatively recent computer to connect. There’s exactly one cable because it draws both power and data from the computer.

It’s chassis is anodized black aluminum, very spiffy to look at, and easily survives a drop to a concrete floor without losing your data.

The drive setup program is showing its 32-bit age, but does the job configuring the drive. However, Mac formatting is HFS+, the Drive Guide does not support APFS, though the drive itself does, and, even when selected, the Guide does not install user manuals.

Configuration is easy, takes about two minutes, and after that it runs like any other hard disk you’ve ever used – except it’s faster. As you’ll see below, its performance easily equals the speed of a five or six drive RAID composed of spinning media and, unlike spinning hard disks, the Envoy Pro EX does not slow down as it fills up.

The only downside is that because it is an SSD, it costs more and holds less than a spinning media hard disk. But, if ruggedness and performance are important to you, this drive is very hard to beat. The box also includes a heavy-duty draw-string bag to hold the drive for transport. 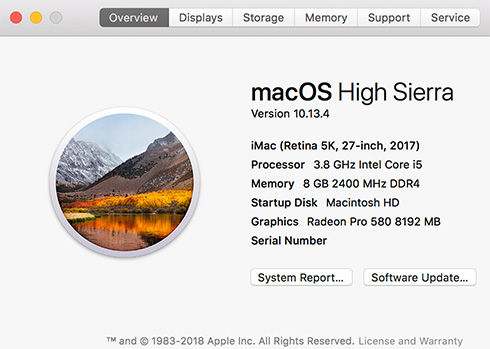 This is the system I’m using to test for this article. (I don’t use this system for heavy editing, which is why I haven’t upgraded the RAM.)

The drive appears on the desktop as soon as you plug it in. However, it is formatted using FAT 32, which is an older cross-platform system so that the drive will appear on both Mac and Windows computers.

To maximize it’s performance on a Mac, you need to run the included Drive Guide to optimize the drive.

Setup is straight-forward, but has several glitches. As the screen shot indicates, the Drive Guide is only 32-bit software. Future versions of the macOS won’t support 32-bit apps. However, for now, running the Drive Guide on any version of High Sierra or earlier will work perfectly. 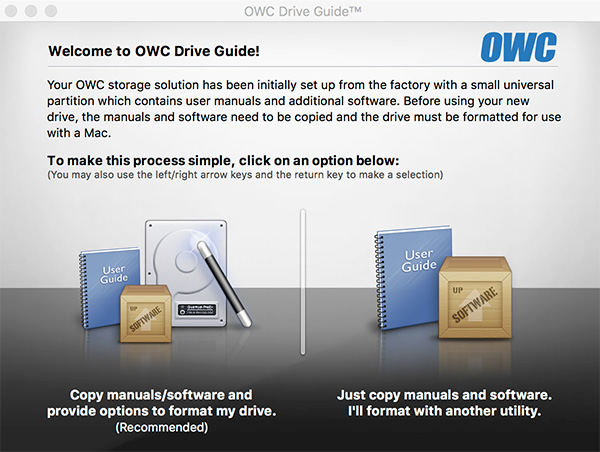 Also, while the drive supports the APFS file system, the Drive Guide does not. You’ll need to use Disk Utility to format the drive for APFS. 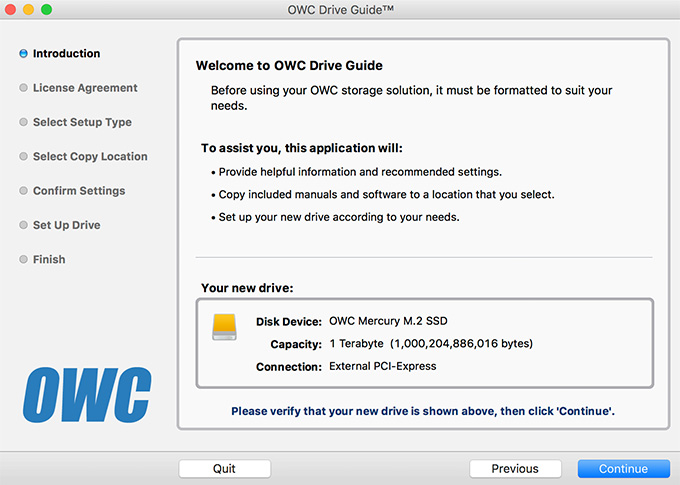 The Guide displays a confirming dialog to make sure you have the right drive. 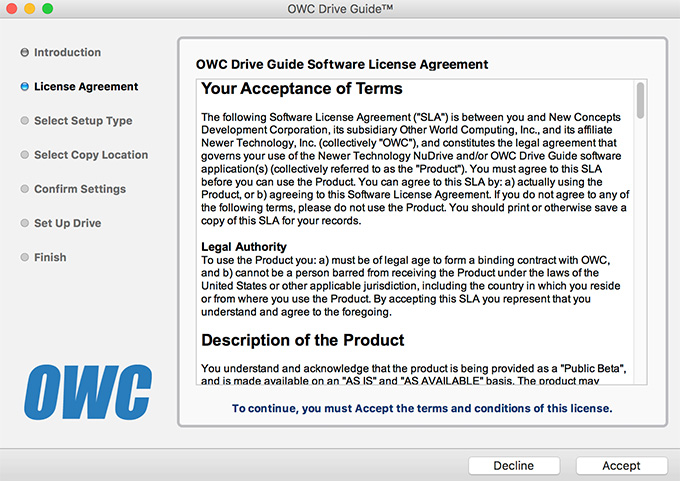 Then it’s time to accept the End User License Agreement. 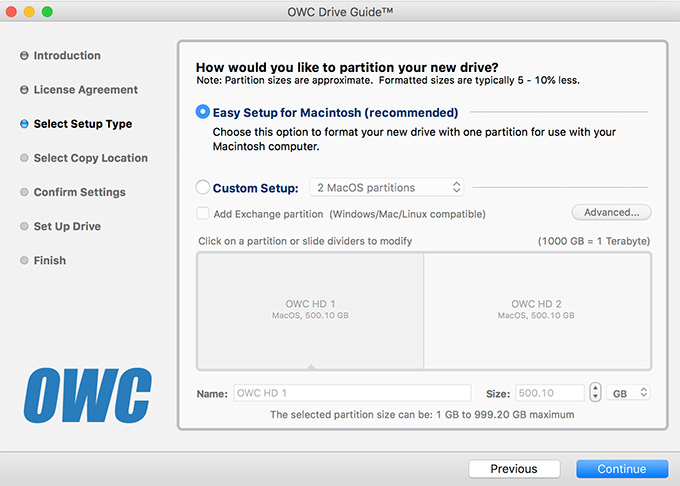 This is the next “gotcha.” Drive Guide only allows Mac drives to be formatted using HFS+. Apple has released APFS specifically for SSD drives, but the Guide won’t let you install it.

NOTE: You can reformat the drive after initial setup is complete using Drive Utility. For SSD drives there are both performance and operational benefits to using the new file system. More on this in a bit. 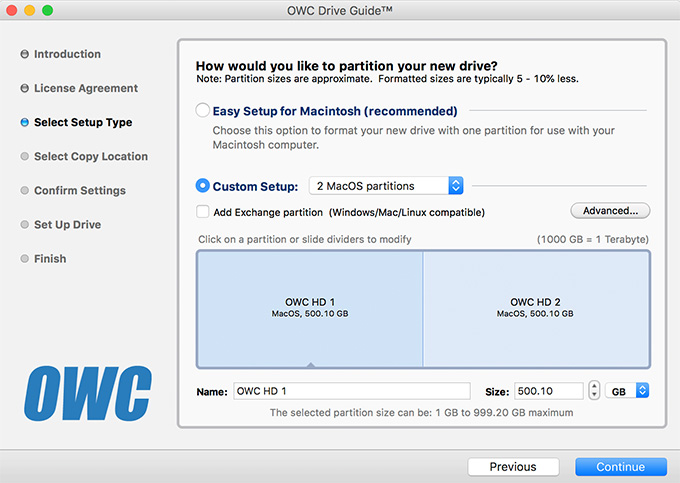 You can also partition the drive, or make it Windows compatible.

If you don’t need Windows support, or need to run multiple Mac operating systems, I recommend you NOT partition the drive. If you want multiple volumes on the same drive,  which generally doesn’t make sense, re-format it to APFS, then install multiple Volumes; again using Drive Utility. Volumes are faster and more efficient than partitions. APFS is a better file system for an SSD drive than HFS+. 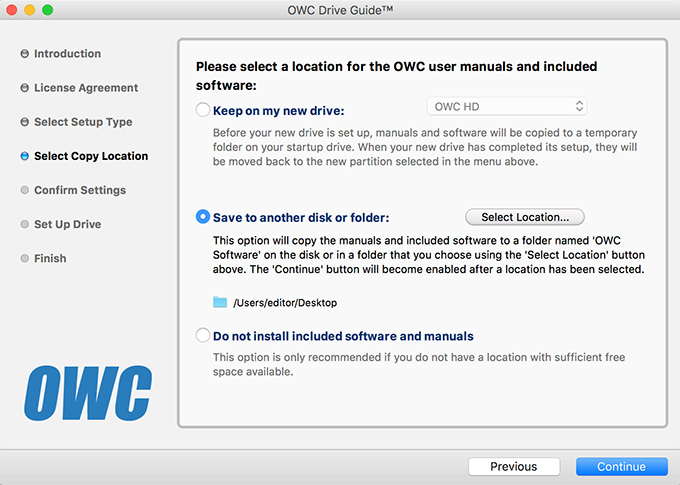 This is the final “gotcha.” I chose to copy the manuals and included software to my desktop, as I store them separately from the drive.

However, Drive Guide only copied an empty folder. This is not a big deal as the user guide can be downloaded from the OWC website. As for the software, I don’t know what was in the bundle, but none of it is necessary for the operation of the drive. 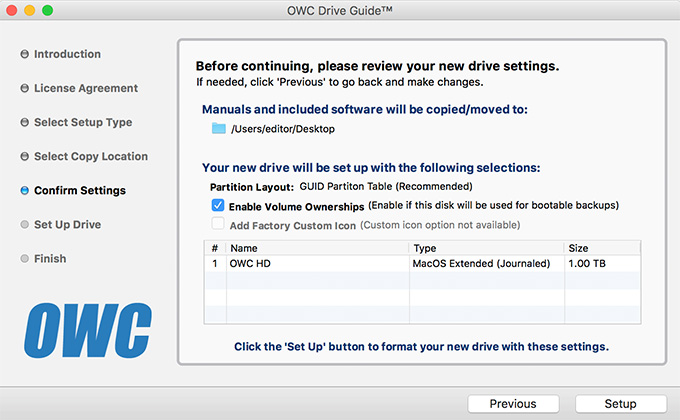 This is the last screen to verify what you are doing. Note that it defaults to macOS Extended (Journaled). This means HFS+. This is perfectly fine, we’ve used it for decades on all our spinning media hard disks. However, APFS is a better choice for SSD devices. 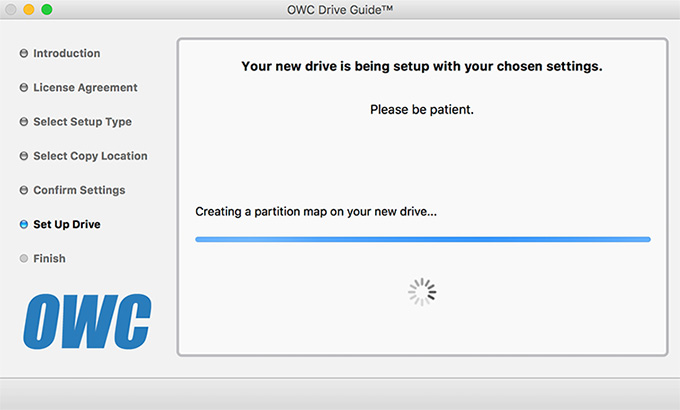 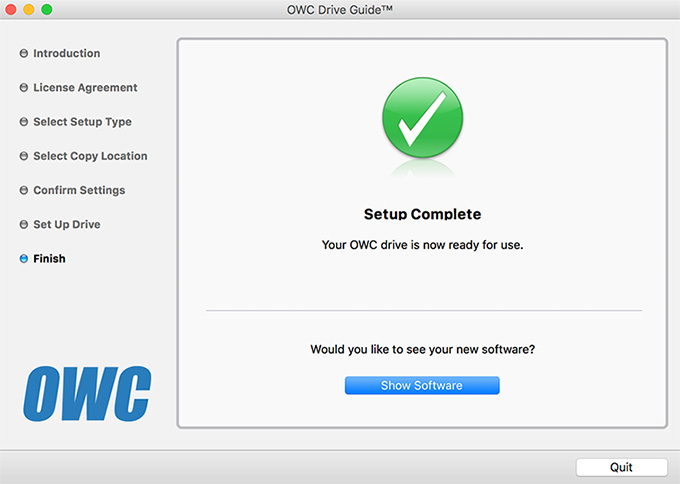 The Guide goes to work and initializes your new drive. 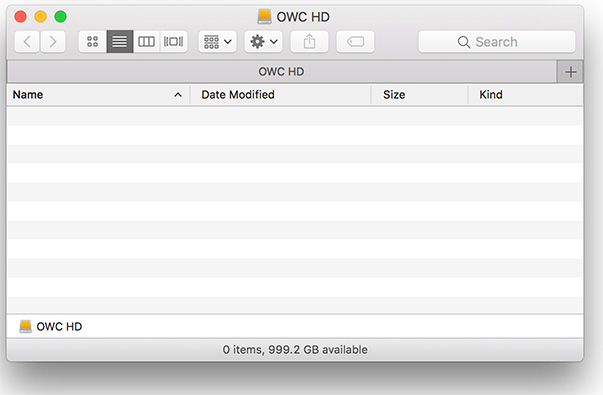 When the Guide is done, the Envoy Pro EX looks exactly like every other hard disk you’ve ever owned. Except much, MUCH faster. 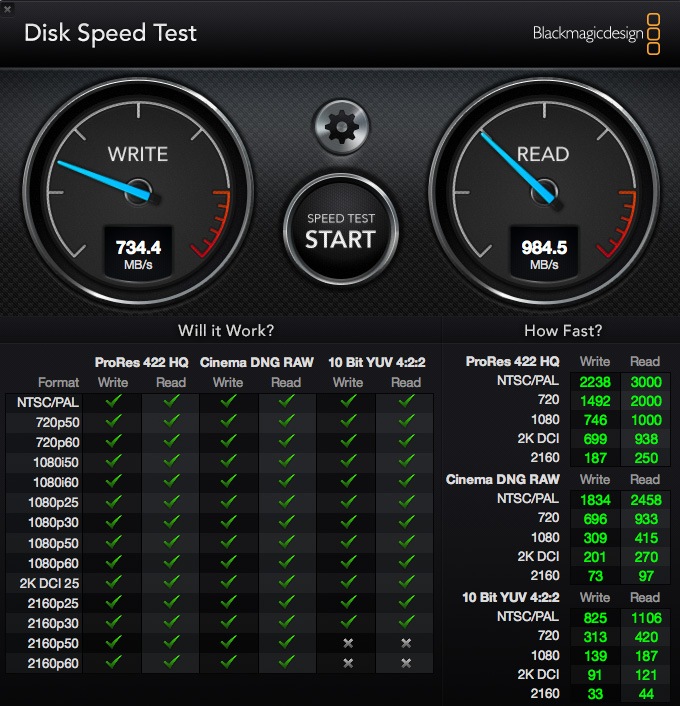 The two tests showed, essentially, the same speed. I don’t consider the differences significant. As you can see from the Blackmagic checklist, this single drive can support all frame sizes, frame rates and bit depths up to 2K for both reading and writing.

NOTE: This drive supports a blistering 2,000 frames per second at 720 fps! Whew.

I would also recommend this system for short multicam projects. It has plenty of speed for multicam editing, the limitation is storage capacity. Again, I recommend against partitioning the drive to allow you to use as much room as possible.

Next, I reformatted the drive to APFS using Utilities > Disk Utility. 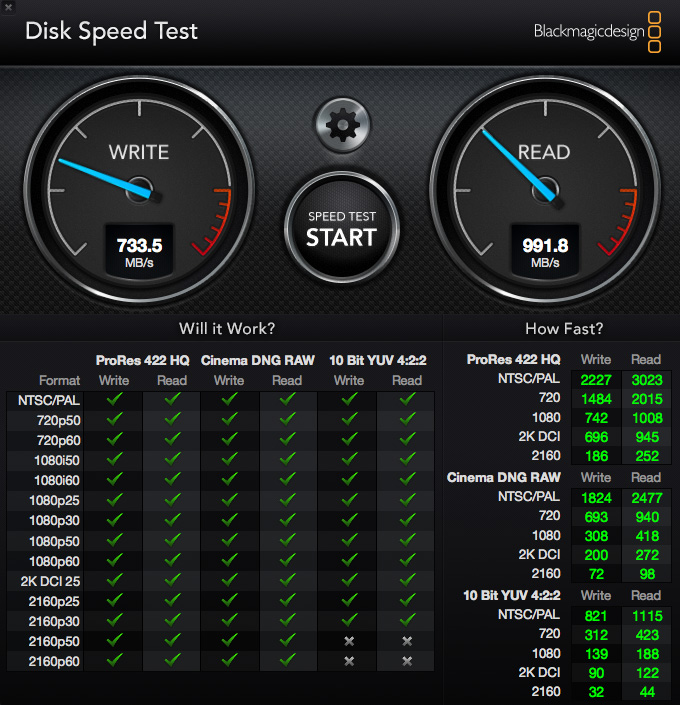 The speed of the drive is essentially the same for both HFS+ and APFS. The benefits to APFS are that it is optimized for SSD drives, supports faster file handling and copying, and allows easy creation of sparse volumes using the new Volume setting in Disk Utility.

You can have both HFS+ and APFS drives attached to the same computer. Fusion drives can not be formatted as APFS. 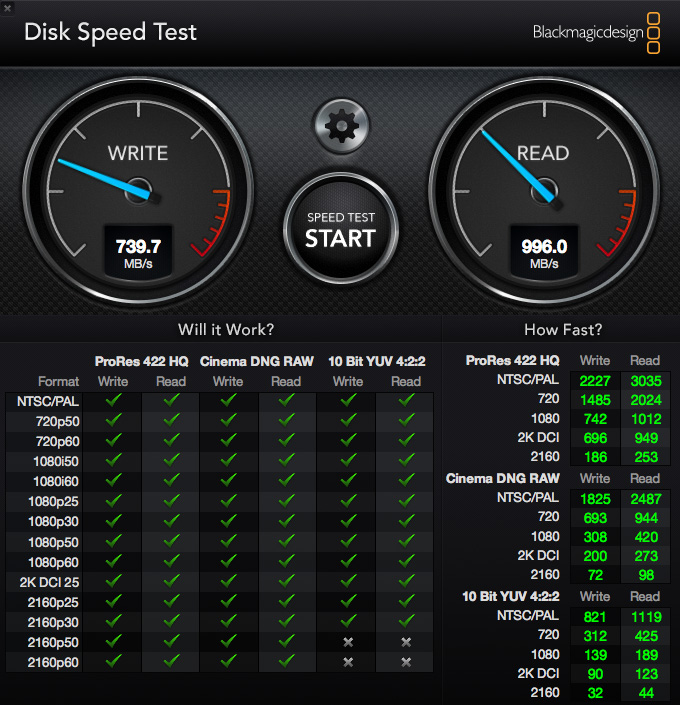 Finally, I tested the system using a smaller 1 GB file and APFS. Again, performance was essentially the same.

NOTE: Faster write speeds are a benefit when copying files. Render and export times are limited by the file generation speed of the NLE software, which is a fraction of the top speed of this drive. For video editing, we are generally more concerned about read speed than write speed. 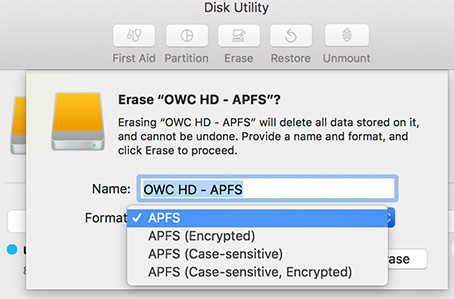 At this point, something interesting showed up. Once the drive was formatted as APFS, Disk Utility would not allow me to reformat it back to HFS+. 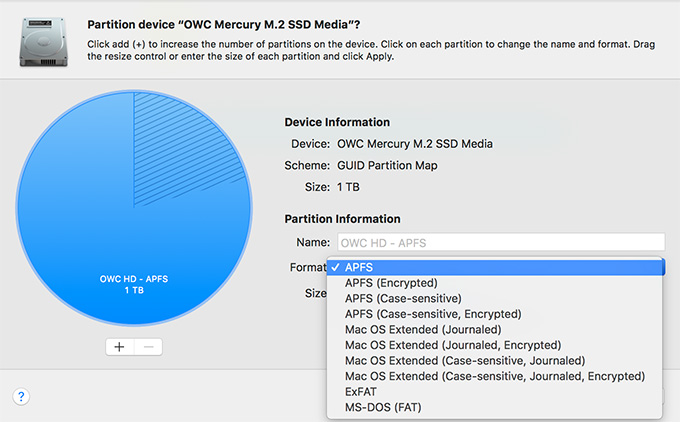 However, I discovered a workaround to convert the drive back to HFS+: recreate the partition allocation for the drive. Again, remember that for SSD drives, there is no benefit to partitioning, unless you need to run different operating systems in each partition.

Rather than use partitions, use Volumes, which are new to APFS. The new Volume structure in APFS is far more flexible, faster and efficient.

I reformatted the drive several times between HFS+ and APFS. While reformatting did erase all the data on the drive – which was expected – there was no significant performance change between the different formats.

When using partitions, there was no difference in speed between two different empty partitions.

Also, when using multiple Volumes in APFS, there is no difference in speed between volumes.

Finally, I filled the drive to 80% capacity and measured performance. There was no significant difference in speed between an empty or full drive, unlike spinning media. 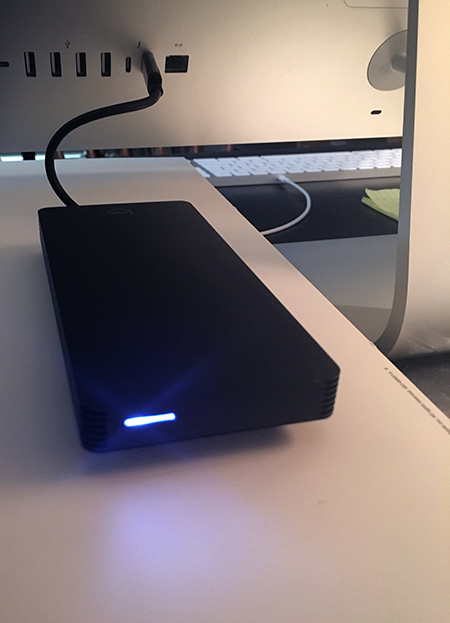 For most single-camera HD editing, this system may be overkill. But as you move into multicam editing, larger frame sizes, greater bit-depth or just want to get home earlier, this system can make a big difference.

If you are looking for a rugged, easy-to-carry and FAST portable drive to pack with your laptop, or as an alternative to a high-speed RAID, the OWC Envoy Pro EX is an excellent option.

The glitches in the Drive Guide, while annoying, can be totally bypassed by formatting the drive using Disk Utility; and the manuals can be downloaded from the OWC website.

Once you get this running, it could not be easier to use and the speed will leave you with a smile on your face.