Whoever designed the iRig Pro, from IK Multimedia, knows field audio. They also knew they couldn’t compete with established portable recorders from Zoom, Tascam or Sony. Instead they did something different – and clever.

They created a very capable, portable, multi-channel audio interface that can connect to a computer, phone or camera. The unit is equally at home recording music or audio for video. It can handle live streaming or multichannel recording. And it is light and small enough to travel anywhere.

Since I don’t create music, I’ll look at this from the perspective of field video production. 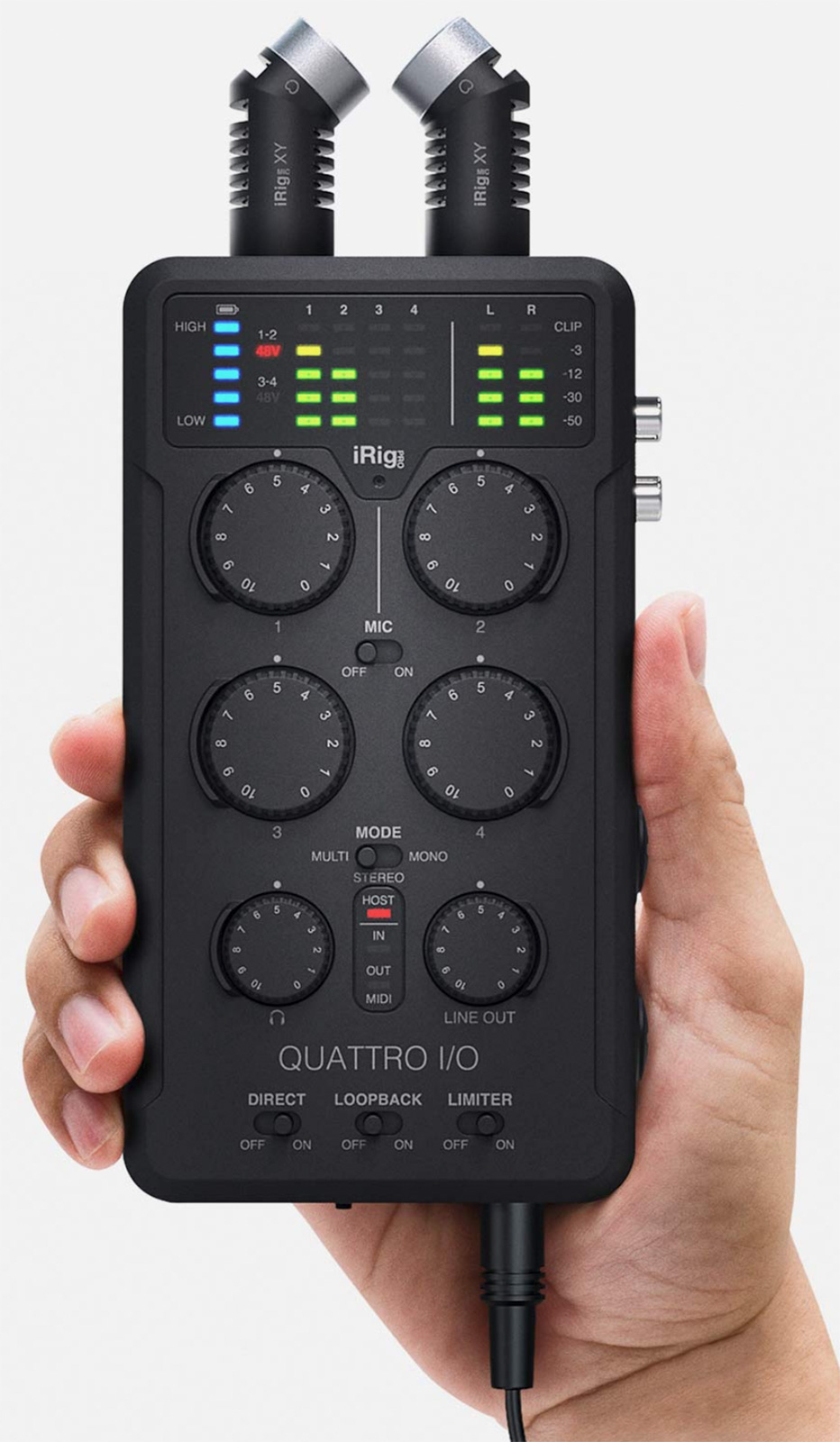 The iRig Pro Quattro I/O is a four-channel digital audio interface, not a recorder, that connects to cameras, Macs, PCs, iPhone and Android devices. It can mix up to four mics, instruments or line feeds and send them, via USB-A, USB-C or Lightning, to a separate device for recording or live streaming.

NOTE: As an interface, it doesn’t record audio. It captures and mixes the audio then sends the output to a separate device, like a camera, for recording or streaming.

The rotating volume controls move very smoothly, with a bit of resistance. This means that they won’t be easily jarred from their settings. It has two different ways to prevent distortion during recording: A built-in limiter assures that mic audio levels don’t distort and a built-in “safety channel” that outputs the main mix audio at -12dB. Every channel is metered, along with current battery level and line outputs, so you know exactly what your audio levels are.

Background noise levels are -90 dB when the unit is powered on and all volume controls are set to 0 (off). Noise levels rise to -54 dB when volume is increased to normal recording levels. This amount of inherent noise is more than acceptable for field recording where even quiet room tone would be loud enough to mask this.

The heavy-duty plastic case has a black matte finish that does not generate reflections. The surface has a soft rubbery feel, which means it’s easy to hold and won’t slip out of your grip if things get wet. It has a threaded holder for attaching to tripod or camera accessory supports.

NOTE: Actual recording time varies by the number of mics connected, whether you are supply 48 volts to the mics, gain adjustments and weather conditions. (Cold weather diminishes battery life.)

I am impressed with the iRig Pro Quattro I/O. I like that it supports up to four channels, provides a variety of audio output options, has controls that move easily then stay put and provides easy-to-read audio meters to keep levels safe. For live recording or streaming in the field where weight and size is an issue, this is a solid choice. 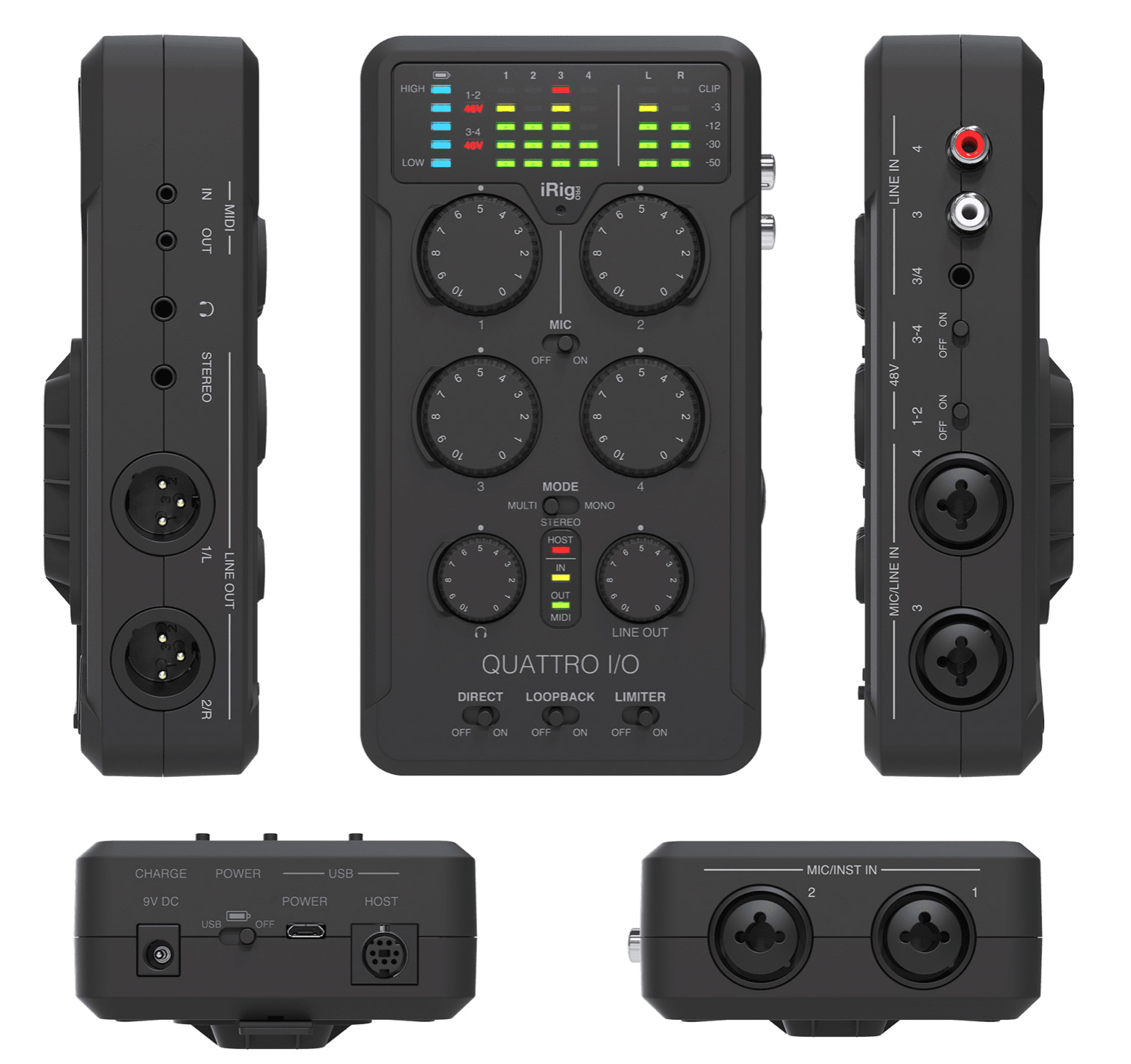 The iRig Pro has:

Power is delivered by USB bus, 4 AA batteries or an external power supply

The purpose of the iRig is to digitize up to four channels of audio, mix them as needed, then send them to another device for streaming or recording.

Since I do all my audio recording using Adobe Audition on a Mac, I decided to see how easy the iRig Pro Quattro I/O is to use. When recording audio in the field, I want to record each mic separately. This provides the greatest control later during the final audio mix.

NOTE: I would only use a mono or stereo output mix if I was streaming a live event. 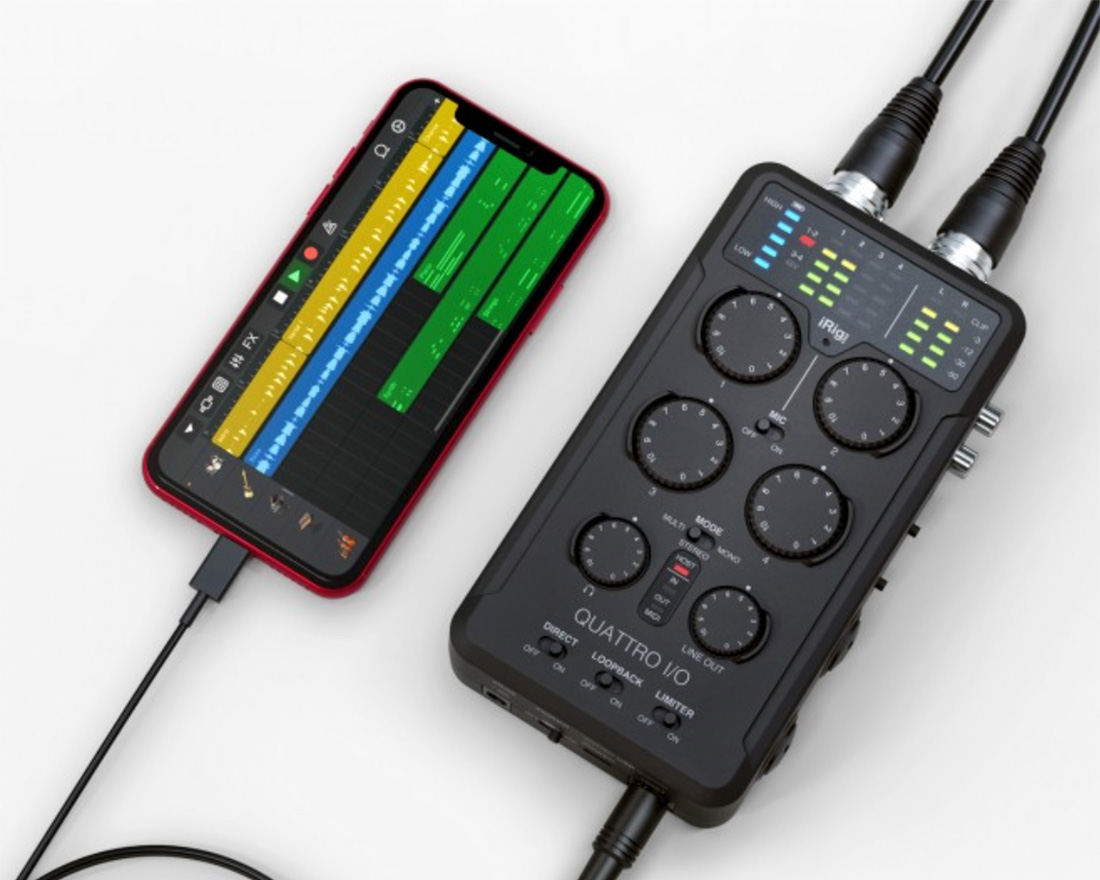 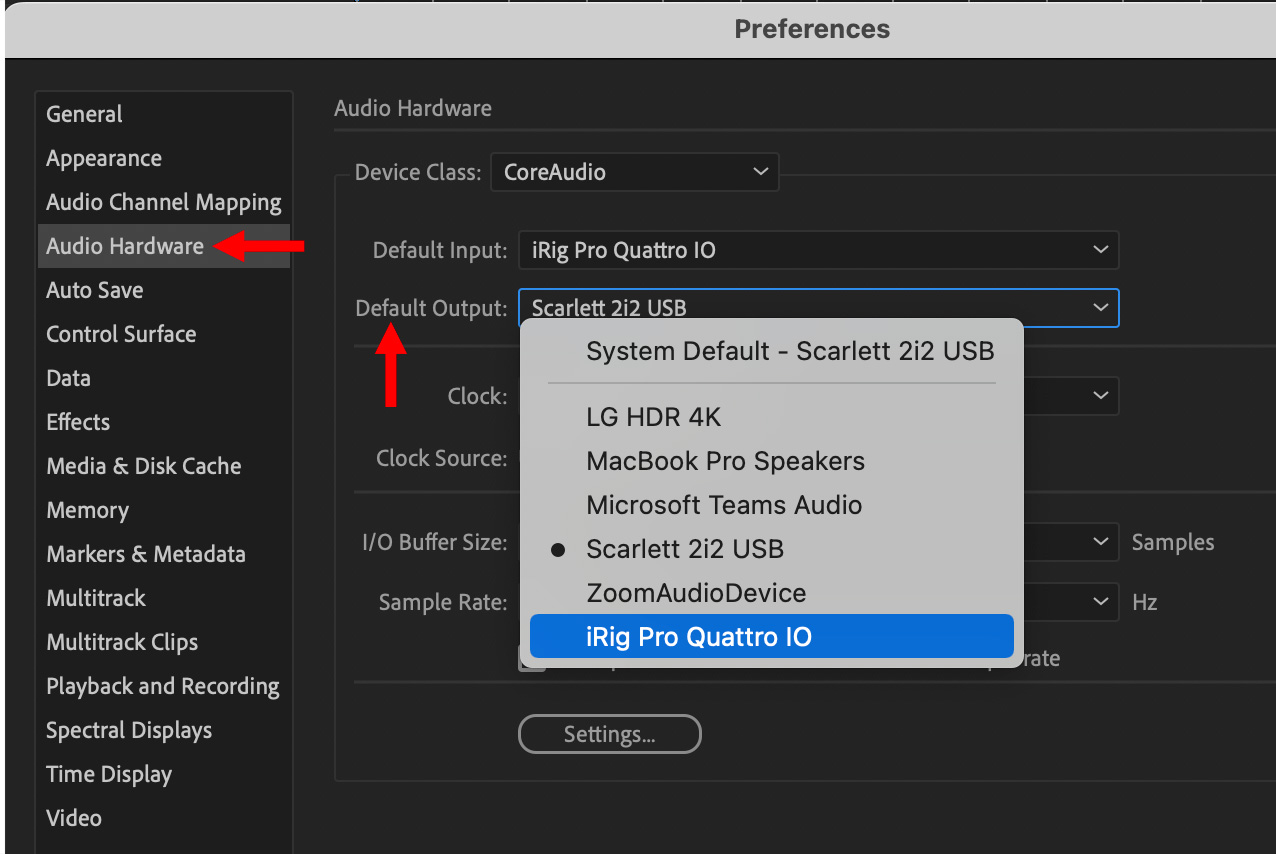 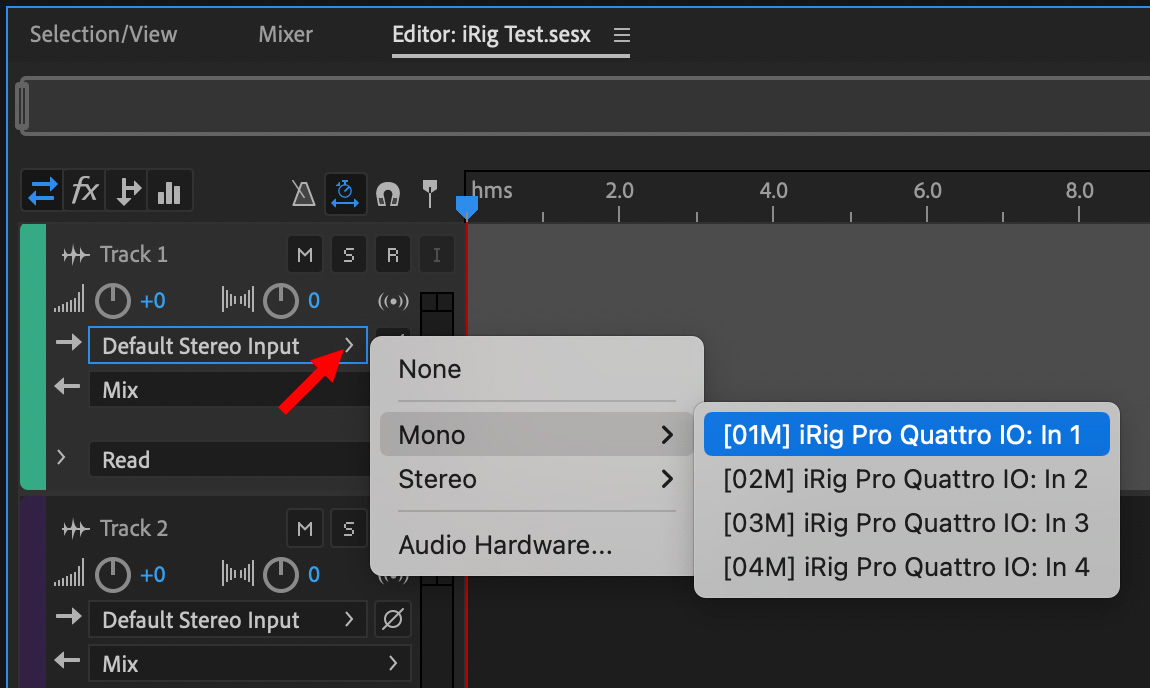 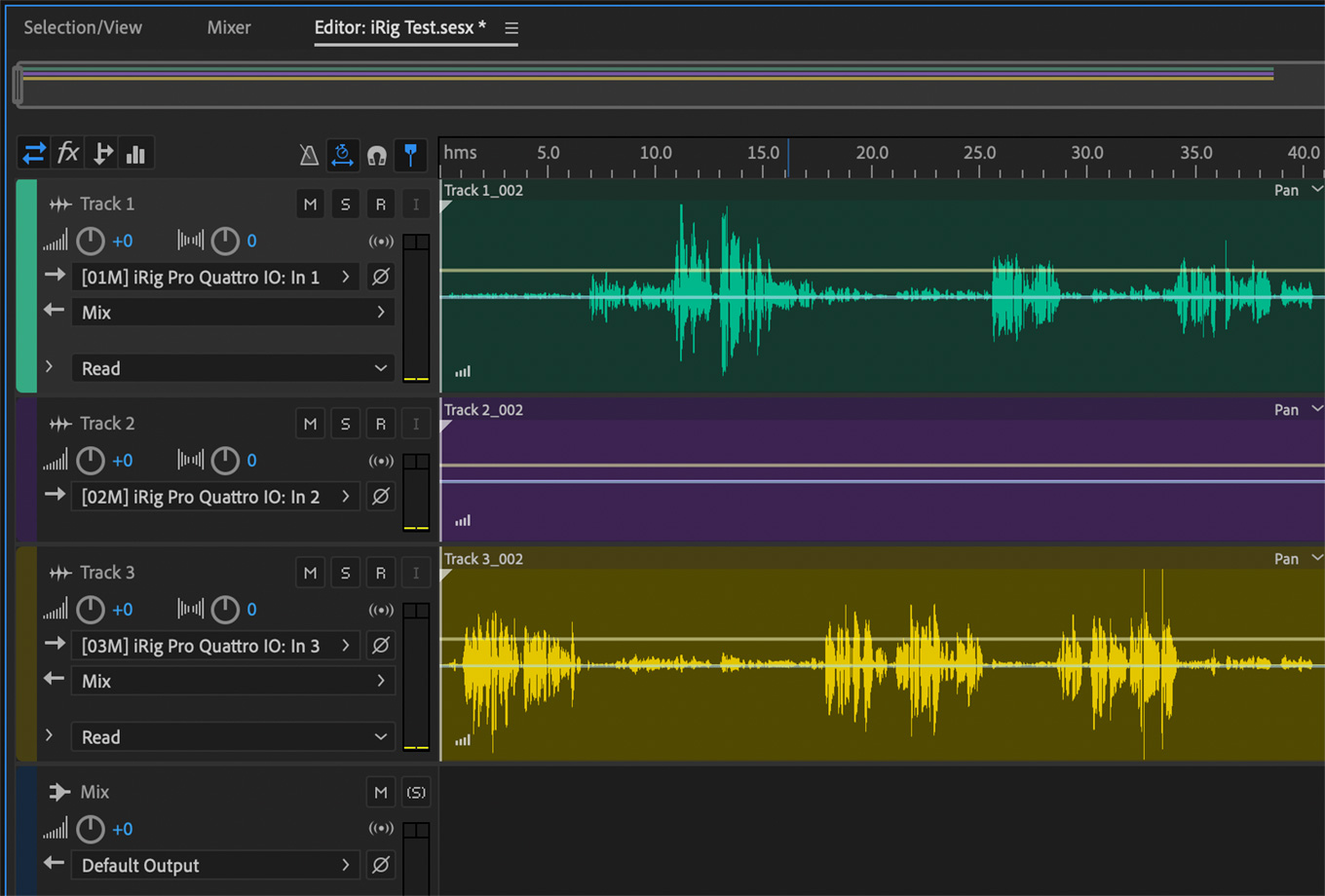 NOTE: In the screen shot above, I recorded silence in Track 2 to determine the background noise level of the iRig. Tracks 1 and 3 recorded a dialog I was having with myself.

When powered on and connected via USB:

There are many things I like about the iRig Pro:

I can feed a signal – say music – from my computer into the iRig using the Line In connection, add mics – say for host and guests, mix the entire production and feed the mixed program out the Line Out for streaming.

The only limitation – and it’s intentional – is that this is not a recorder. It’s an interface and mixer. 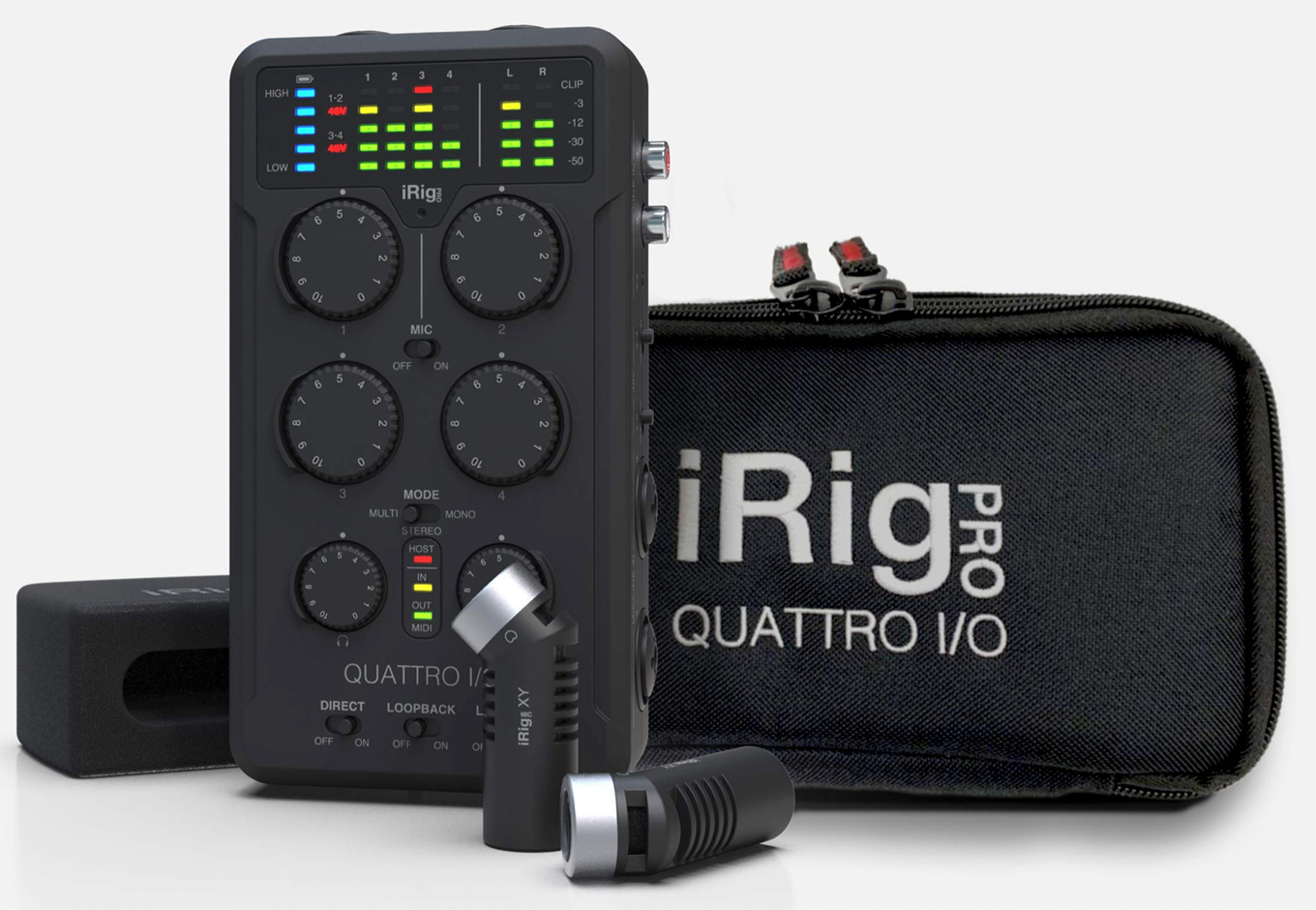 I like the iRig Pro Quattro I/O, especially if I were streaming live audio from remote locations. It is light-weight, capable and takes almost no space in a travel kit. This device is also worth considering for recording up to four mics in the field to bring back for later editing.

It supports all major computers, mobile devices and any camera with an audio input; outputs in all common formats; and supports bit depths and sample rates that far exceed human hearing. It is a very cool device.