[ Please read this for my disclosure statement on product reviews. ]

In today’s world, the speed and capacity of our storage is far more important to the performance of our editing system than the speed of our computer. Virtually all CPUs made today are fast enough to edit even the highest quality video. The gating factor is storage.

How storage is connected, the protocols we use for moving data, and whether a drive includes an SSD (Solid-State Drive) or just spinning metal platters, are far more relevant than measuring CPU clock speed or the brand of the GPU.

Recently, G-Technology released a new storage system called the G-Dock ev with Thunderbolt and, last week, they loaned me a unit to review.

NOTE: While Thunderbolt 2 is announced, it is not yet shipping. These use Thunderbolt 1 protocols and connections. 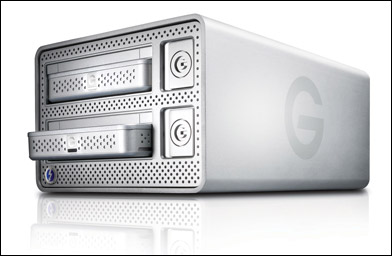 What makes the G-Dock ev with Thunderbolt fascinating is that is an interesting combination of portable drives and expandable storage. Even though the G-Dock ev has two drives, it isn’t setup as a RAID (Redundant Array of Inexpensive Drives). Instead, it is a docking station that allows you to plug in up to two portable drives so you can quickly access files stored on a particular hard disk, or expand your storage across multiple hard disks.

NOTE: According to G-Technology support, it is possible to setup this device as either a RAID 0 or RAID 1. (Click here for an explanation of RAID levels.) However, if you do so, you lose the ability to swap drives in and out, unless you treat them as sets. There are better and less expensive options for RAID storage than this unit. 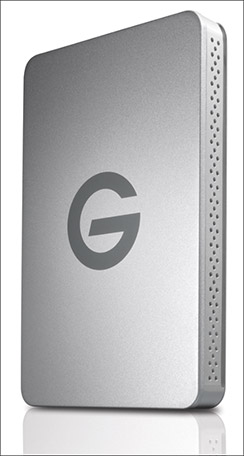 The small portable drives can serve as stand-alone hard disks and connect directly to the computer via USB 3. Or, plug the portables into the dock, and access the data via Thunderbolt. Both USB 3 and Thunderbolt have the potential to be significantly faster than FireWire 800. 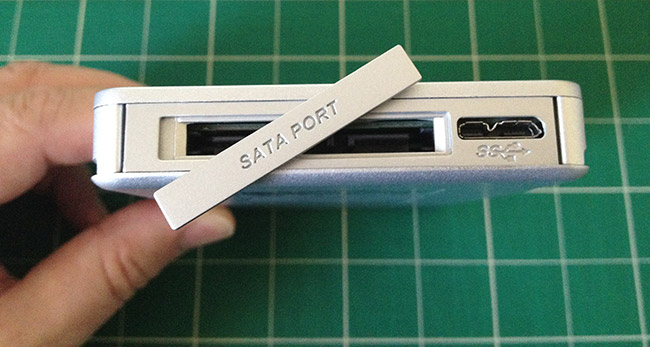 UPDATE: Currently, the G-Dock is Mac-only, compatible with all Macs that have a Thunderbolt connection. However, you can use the small portable drives on either Mac and Windows, provided you reformat them as FAT-32 and connect them to your computer using USB 3. However, as I understand it, FAT-32 volumes limit the maximum individual file size to 2 GB.

WHAT’S IN THE BOX 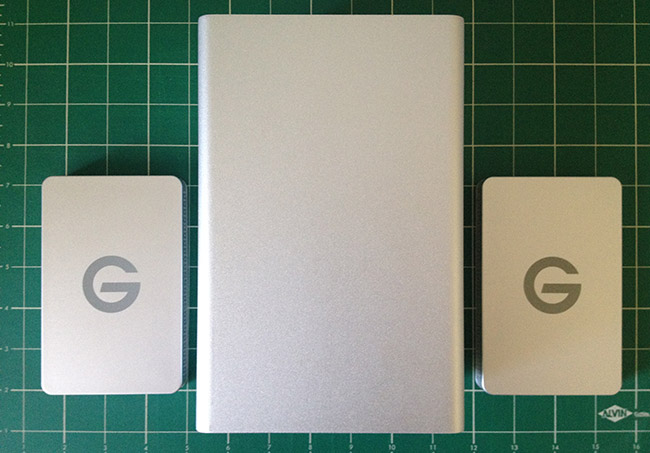 In the box is the docking station (the big metal box), two 1 TB portable drives (the two smaller metal boxes), an external power supply, one Thunderbolt cable and two USB 3 cables (USB 3 connector at one end and USB 2 connector at the other). Also included is a simple setup sheet describing the six steps involved in installing the software and hardware. (Though only supplying an 18-inch Thunderbolt cable is a bit on the stingy side, G-Tech is probably assuming you already have one other Thunderbolt device attached to your computer.)

NOTE: It would be NICE if the important notes at the bottom could be printed in a point size large enough for people with less than perfect eyesight to read. And whoever thought thin, light-gray text on coated white paper is readable has never actually needed to read one of these things… Sheesh. People, we need to SEE this before we can READ it…!

While you can connect one of the portable drives directly to a USB 3 slot on your computer and use it as a hard drive without installing any software, in order to take advantage of all the blinking lights on the docking station – and we all know how important blinking lights are to proper operation of technology – you need to install the G-Technology Assistant, which is available on the G-Tech support page (www.g-technology.com/support) 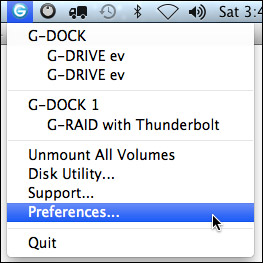 What this does is install a small driver that makes the LEDs on the front of the unit show disk activity and ejection status, as well as display disk activity via the Notification Center and allow access to the Assistant in the menu bar. 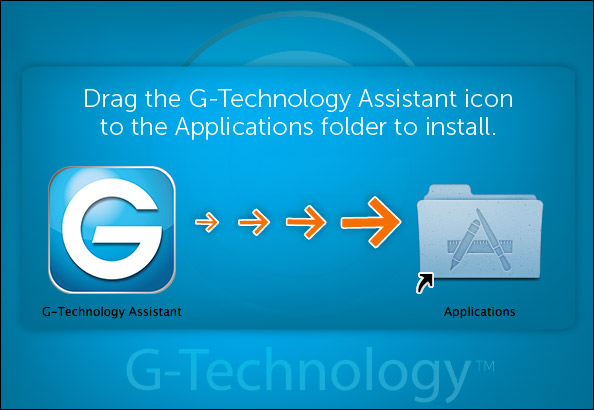 Installation is as easy dragging the Assistant to the Application folder. Download and installation took less than a minute.

Once everything is installed and powered up, two disk icons – one for each portable drive – are displayed on the Desktop. At this point, working with each drive is the same as working with any other hard disk. And, just as with any other hard disk, before you remove a drive from the dock – by pushing a big EJECT button on the front of the unit – you need to unmount each drive.

You can do this by either right-clicking the drive icon or, my personal choice, select the drive and type Command+E.

The Notification Center tells you which slot has been ejected, and a green LED on the front of the docking unit lights up indicating which drive can be removed. Remounting a drive is as simple as pushing it back into the docking station. After a few seconds, it reappears back on the desktop.

NOTE: The portable drives come pre-formatted as MAC OS X Extended (Journaled), which is an excellent choice. And, like all hard disks, you can rename them at any time you wish.

THE HEART OF THE MATTER – PERFORMANCE

While I like the idea of a docking station and the ability to quickly swap hard disks in and out of the system, if this doesn’t have reasonable speed it won’t be useful. So, I have the following questions:

So, let’s start finding out the answers. For this test, I’m using the latest versions of AJA System Test and Blackmagic Disk Speed Test (I’m also curious to see if different testing software yields significantly different results). I ran this test using a nine-month old iMac (the latest design.) However, I also spot-checked these numbers on a two-year-old MacBook Pro, and the results were, essentially, identical.
HOW FAST IS A SINGLE DRIVE WHEN CONNECTED VIA USB 3? 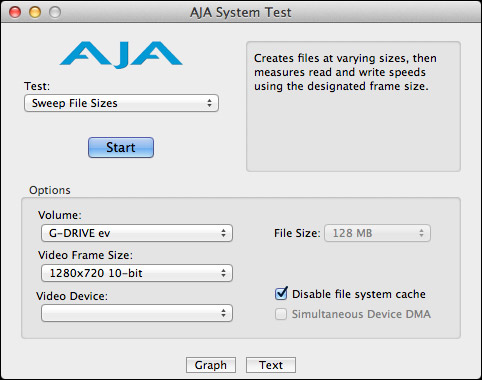 Here are the settings I used for all tests with the AJA System Test. In the Blackmagic test I set the stress level to 5 GB, which is its highest setting.

For a single drive attached via USB 3, the test results were very close:

Essentially read and write speed for a single drive is at the high-end of what we would expect from a single drive. (I normally tell students to expect about 120 MB/second from a single drive.) As a standalone drive, these numbers are excellent. By comparison, a FireWire 800 drive would deliver data around 85 MB/second. So this is about 56% faster than a Firewire drive.
HOW FAST IS A SINGLE DRIVE WHEN MOUNTED IN THE DOCKING STATION?

The short answer is: the docking station slows the drive down a bit, but not a lot ; about 1-2%

The 2-3 MB/second that’s lost by going through the docking station is not enough to worry about. Thunderbolt simplifies connecting the device, but doesn’t add anything for speed. Again, the speed differences between the two tests are not meaningful.
DOES IT MAKE A DIFFERENCE IF THE DOCKING STATION IS ATTACHED FIRST OR SECOND?

The short answer is: Nope. The numbers in the earlier test had the drive connected behind a G-Technology Thunderbolt RAID.

When the docking station was attached directly to the computer, via Thunderbolt, the results were slightly faster, but not so much that I would worry about where I was connecting a device.

What also interests me is that normally, writes (recording) are faster than reads (playback). I am intrigued that both sets of numbers are so close.
HOW FAST IS THIS AS A RAID O?

RAID 0 harnesses the speed of both drives to maximize performance. Using Disk Utility, I configured this as a RAID 0, with a block size of 128 KB. The only problem with configuring this as a RAID, is that you can’t remove the portable drives and use them separately, as that would break the RAID.

Normally, the speed of a RAID 0 is equal to the combined speed of the two drives, less a bit of overhead. And this is exactly what we see here. (And, again, the numbers between the two tests are close enough that I would not worry about the differences.)

By way of comparison, the 4 TB G-Tech Thunderbolt RAID that I bought about six months ago and is now mostly full (the fuller a hard drive is, the slower it goes) provided the following results:

So, G-Technology is continuing to add more performance, even into their single-drive systems.
HOW FAST IS THIS AS A RAID 1?

RAID 1 is ideally suited to capturing media on set, where media files are written simultaneously to both drives. However, given the configuration of this unit, you would be far smarter to leave the two drives separate and record media to them as standalone drives than to stripe them as a RAID 1. (Shotput Pro is excellent at writing camera data to multiple drives.)

Still, just to be complete, here are the numbers.

If all you need is speed, get a RAID 0 or RAID 5. It will be faster and cheaper. But, if you need a combination of speed, expansion, and flexibility, this unit becomes compelling.

The G-Technology G-Dock ev contains some of the fastest single hard drives I’ve ever measured. Their ability to connect via the docking station or run standalone provides significantly more flexible connectivity than we’ve had in the past.

These drives are plenty fast enough for all standard-def video formats and all compressed camera native formats. It should be able to play back 2-4 streams of ProRes 422, but I would not recommend these for complex multicam editing. This unit is not designed for, nor do I recommend, using it as a RAID. It can be done, but there are other, better RAID options available. I recommend using each drive as a standalone drive; what the industry calls “JBOD” (Just a Bunch of Disks).

Keep in mind that this system only works in very late model Macs (and Windows) systems that have Thunderbolt, for the docking station, or USB 3, for the individual drives.

If you are looking for flexible storage that can sit on your desk or travel with you, with state-of-the-art single-drive performance, and the option to swap drives into a docking station, the G-Technology G-Dock ev looks to be an excellent choice.