[ Please read this for my disclosure statement on product reviews.]

It’s been a while since I wrote about the Shuttle Pro from Contour Design – www.contourdesign.com. So, when Matt Ouellette, Account Manager for the Shuttle, asked if I wanted to take a look at their latest version – the V2 – I said “Yes!” immediately. So, earlier this month, Matt loaned me a brand-new ShuttlePRO v2 and ShuttleXpress to review.

The basic idea behind the Shuttle is to make audio and video editing more efficient by combining a jog wheel and a spring-loaded shuttle ring, both of which are programmable, with buttons linked to essential keyboard shortcuts, so that your hands stays in one spot, with easy access to the keys you need the most. This isn’t really a keyboard replacement, rather, it is designed to minimize the number of times your hands need to jump to the keyboard.

The Shuttle is specifically designed for multimedia content creation – editing video, audio, and images. And, since the Shuttle has been around since forever, it supports virtually all the software we use on a daily basis. (Basically, it supports any software that uses keyboard shortcuts — for instance, just now, I idly twisted one of the wheels and the cursor started moving in my word processing program. Cool!) 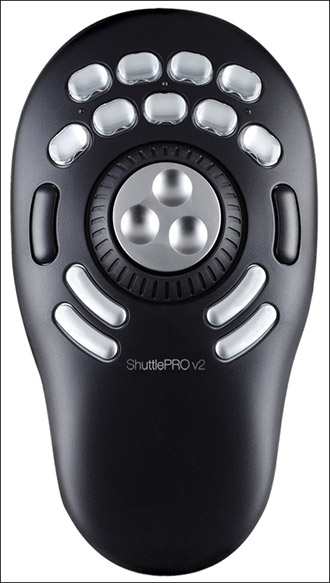 The ShuttlePRO v2 (MSRP: $109.95) has 15 programmable buttons, jog wheel, and spring-loaded Shuttle ring. All buttons have presets, but every button can be custom-assigned a keyboard shortcut using the Contour application, which I’ll get to a little later in this review.

The top two rows of buttons have removable caps so you can add keyboard labels (72 printed labels are included, along with another 72 blank labels) for quick reference. 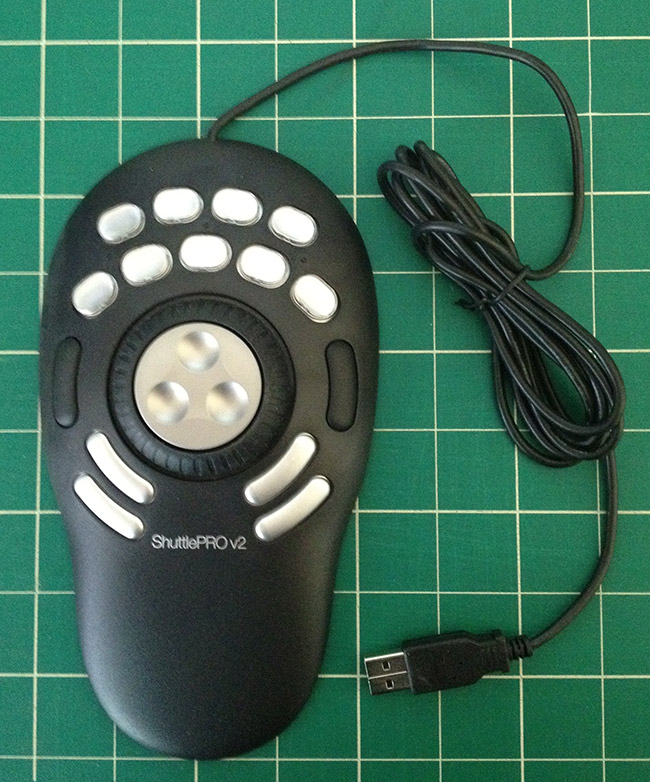 The unit is about 7.5 inches high, 4.5 inches wide and about 1.5 inches tall. It weighs just a few ounces, has a very nice feel and sits solidly on a desk; with no slipping around. It has a six-foot USB cable, which I think is excellent because it can easily reach computers that are not sitting right next to the keyboard. The ShuttlePRO comes in black and silver. 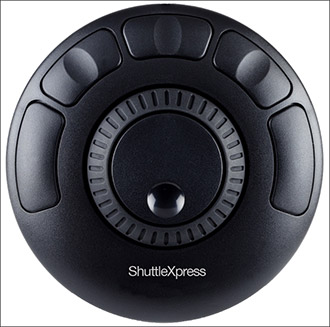 The ShuttleXpress (MSRP $59.95) is a smaller version of the ShuttlePRO, designed for traveling editors or those for whom space is at a premium. About half the size of the ShuttlePRO, the Xpress has five large buttons spaced around the circumference, along with a jog wheel and spring-loaded shuttle ring at the center. 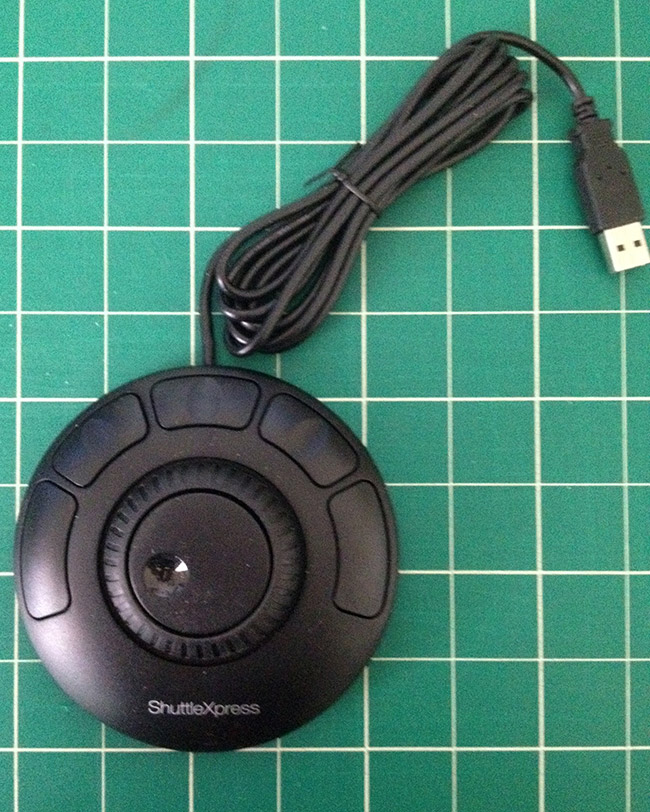 It is in the shape of a circle, roughly four and a half inches in diameter and an inch and a half tall, with an attached six-foot USB cable. (Yay!) And the unit is light enough that you’ll never notice the weight. The Xpress also comes in black and silver.

Both the ShuttlePRO v2 and the ShuttleXpress use the same software and work the same way. If size or cost is an issue, get the Xpress. If it isn’t, get the ShuttlePRO. Aside from the number of buttons, the operation of both units is the same.

NOTE: Up to 2 shuttles can be connected to the same computer at the same time, with each programmed separately. When connecting two shuttles, Macs and Windows operate differently. See the Contour Design website for details. Tech support is offered for the life of the Shuttle.

To give you an idea of how long Contour Designs has been making Shuttles, the installation software supports every Mac OS starting with version 8 — which was about ten million years ago – along with a variety of Windows versions (8, 7, 2000, XP, and Vista).

For users with older systems, each device comes with an installation CD. For newer systems, without CD drives, you can download the installers from Contour’s website.

In September of this year, they released new software designed for OS X 7 and later. (As of this writing, these drivers are still in “public beta.”) I’m running OS X 10.8.5 on a new iMac with no CD drive, so I downloaded the 3.0 b19 beta software from their website for this review. (Be sure to read the installation instructions before installing the drivers to avoid problems if you have an earlier version of the software installed on your system.)

Installation requires restarting the computer and the whole process took me less than a minute.

Connecting either Shuttle is easy – just plug it into an available USB port. (In general, for power reasons, I recommend connecting the Shuttle directly to the computer, rather than the keyboard.)

The Shuttle is designed to reduce your use of the keyboard. So, one hand is on the mouse and the other hand is on the Shuttle. For non-ambidextrous people, this will feel a bit weird at first. But, the time savings are significant if you take the time to learn to use both hands.

One of the cool things about the software is that it automatically senses what application you are running and reconfigures the Shuttle based upon the active application. No manual switching is necessary, although that caused a bit of confusion, as you’ll read about shortly.

Listing all the supported programs – there are close to 100 – would take too long. Here are some highlights:

As software is constantly updated, check the Contour Shuttle Online Forum – http://forum.contourdesign.com – for their latest settings. 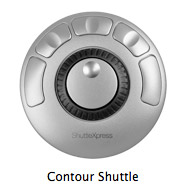 If you need to change a default configuration, or want to learn what the defaults are, open the Contour Shuttle application, located in the Applications folder. (You can also access it from a small icon at the top right of the menu bar.) 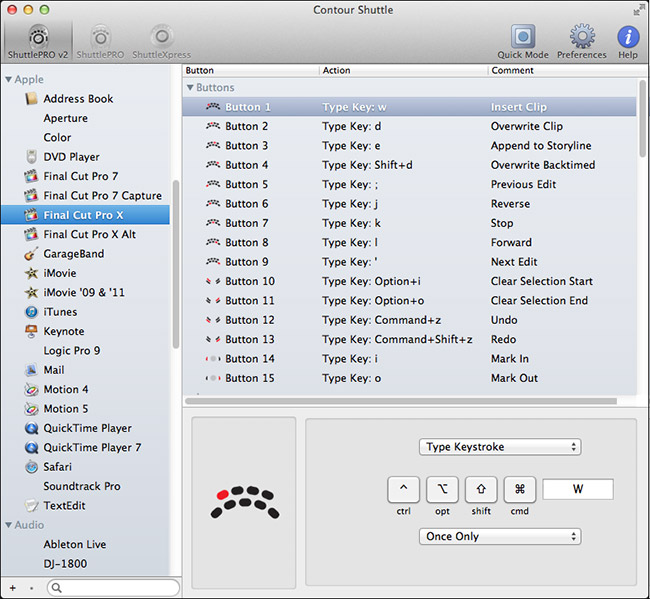 For instance, here are the default keyboard shortcuts for Final Cut Pro X for the fifteen buttons of the ShuttlePRO v2; nine are across the top, two next to the shuttle ring and four below it.

The column on the left lists some of the supported applications and the section at the bottom allows you to reconfigure which shortcuts are assigned to a button.

NOTE: I would change the top four buttons to Q – W – D – E, to access the standard edits we use the most. And I’d replace the J-K-L keys with Zoom In – Zoom Out – Fit to Window, because the shuttle ring does a far better job of moving the playhead than the J-K-L keys do.

But, the nice thing is that, since all the keys are programmable, you can keep tweaking the button settings until you get the shortcuts that help you the most.

Changing shortcuts is easy: either press the button on the Shuttle or highlight the button in the menu to select it, click a modifier key icon (if needed), and type the key you want to use. Changing comments is equally easy. Double-click the text you want to change to select it, then change it.

Here, for instance, I’ve remapped the top four buttons and changed all the comments. 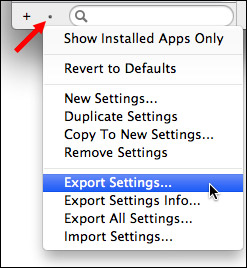 Click the microscopically small gear menu at the bottom right to save, export, import or remove settings.

NOTE: An especially useful feature of the ShuttlePRO v2 is that you can use it to create macros, which are strings of commands to perform a task or group of tasks. Since macros are not natively supported by FCP X or Premiere Pro, this becomes a VERY useful feature. 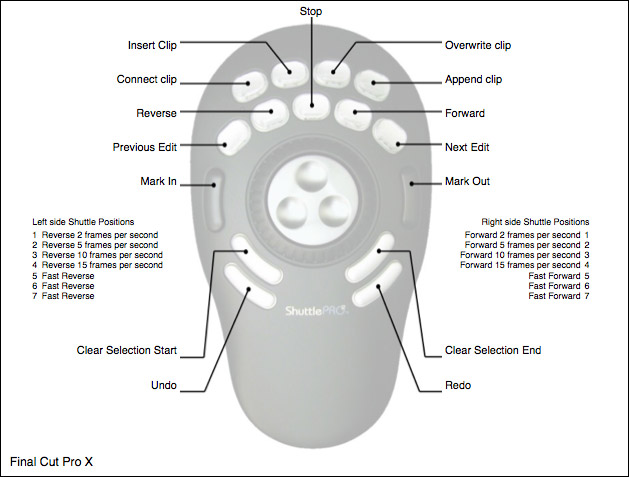 From this gear menu, you can even export an image of the Shuttle, using Export Settings Info, which shows all keys and comments. This is a feature I like a lot.

There is an excellent User Guide with clear illustrations and lots of detail on making the most of the Contour Shuttle application.

NOTE: However, I did note that there is an entire section called “Transitions” in the application that has no reference in the User Manual, nor is there any obvious way to access them – the screen illustration is unclear to the point of being confusing.

PUTTING IT TO USE

However, the real test is how well it works. So, let’s start Final Cut Pro X.

These functions are wonderfully smooth in FCP X. However, you still need to use the mouse to select a specific clip in the Event Browser, a particular window, or where in the Timeline you want to place the playhead.

It is the combination of the ShuttlePRO and the mouse that makes this so efficient.

When I switched from the ShuttlePRO to the XPress, I got the same smooth scrolling using the shuttle ring, but the jog wheel uses a stronger detent, so the jogging is not as smooth. Also, the unit is lighter, which makes it want to move on the desktop. Contour Design could fix this by adding bigger rubber pads to the bottom to make it less likely to slip.

Another puzzling thing is that when FCP X starts, the Shuttle thinks it is FCP 7. This means that the preset shortcuts are set to the wrong application. I looked in the User Manual for a way to tell the shuttle it was in the wrong app, but couldn’t find it. However, it IS easy to switch between different presets, once you know where to look!

Go to the Shuttle icon in the top menu bar. This lists all the possible presets and change it from FCP 7 to FCP X. In fact, you can create as many different shortcut sets as you need, so you are not limited to just 15 shortcuts. You can create a set for importing, another for editing, a third for trimming, and one for color grading. Switching between sets is as easy as selecting an option from this menu.

First, I LOVE the shuttle ring and jog wheel. Once I realized that this is designed to run in conjunction with the mouse, the speed and efficiency of scrolling through the timeline and clips is just delightful. (I just wish the ShuttleXPress could use the same jog wheel that the ShuttlePRO does.)

But, I’ve always had a problem trying to limit myself to 15 shortcuts. So, the new ability to quickly shift between shortcut sets using a menu removes that concern. I’m not sure it has totally convinced me to take my hand off the keyboard, but it has made the prospect a whole more tempting than before.

Contour Design has been serving media creators for a long time. Their products are well-made and designed for hard use. They support virtually all the software we use regularly.

If you are looking for a smoother way to move around the timeline, and a fast way to access your most popular keyboard shortcuts, the ShuttlePRO v2 is worth considering. The new Contour Shuttle app makes configuring the system simple, fast and elegant. If space is tight, the Xpress is a solid second choice. It just needs to skid a bit less and decrease the pressure of the detents in the jog wheel.

The editor that I think would get the most from the Contour Design ShuttlePRO v2 is someone who has a few favorite shortcuts, tends to use the mouse more than the keyboard, and wants a faster, more precise way to control skimming and playback. If this is you, you’ll love the new ShuttlePRO v2.