New in Mojave is a utility that captures screen shots called – wait for it – “Screenshot.”

When I upgraded to Mojave, I discovered that my long-favorite screen shot utility – Ambrosia Software’s SnapZ Pro – no longer worked. This was software I used every day and I mourned its loss.

Then, a reader pointed out this new utility which is included with Mojave. Now that I’ve been using it for a while, I want to show you how it works.

Screenshot is already running on your system. Simply type Shift+Cmd+5 and a dotted frame opens on your desktop. (I’d, um, show you but you can’t take a screen shot of a screen shot.)

NOTE: You’ll find the app itself in Applications > Utilities.

A floating menu appears at the bottom of the screen.

NOTE: While you can’t use Screenshot to capture photos of itself, you CAN use Shift+Cmd+3.

The first five icons along the bottom, from left to right, allow you to record a:

Select which you want to capture, press Return, and you’re done.

By default, the screen shot is saved to the Desktop and also appears as a small icon in the lower right corner.

Double-click this floating icon to open it for annotation and editing without opening Preview. 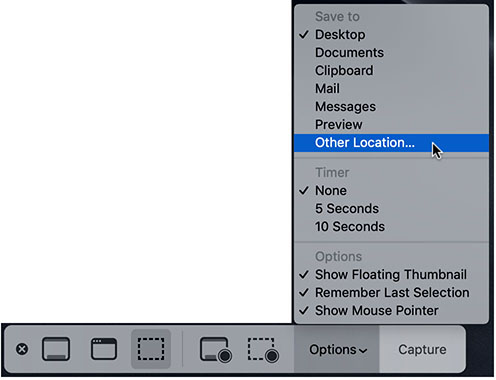 There are two or three button on the right that provide even more options:

Capture is used when you want to capture the screen or a portion of it. Most of the time, pressing the Return key will be enough. But, for timed captures, you’ll need to start the timer using the Capture button.

Record only appears when you are capturing a movie of the screen. Since I use Telestream’s ScreenFlow, I haven’t tested this much.

Options expand what you can do with the software in a variety of useful ways. For example, you can determine where the file will be saved, including the:

NOTE: I long ago standardized on a single folder location for all my screen shots. I like that Screenshot allows me to continue to use it.

You can create a timed screen shot of either 5 of 10 seconds. This is the only way to capture a menu and, theoretically, the cursor.

The three checkboxes at the bottom allow you to:

This last feature, however, does not work. I have not found any way using Screenshot to capture the cursor in any screen shot.

Screenshot does a good job at what it does, but there are several limitations that may make you want to look for a different utility in the Mac App Store: 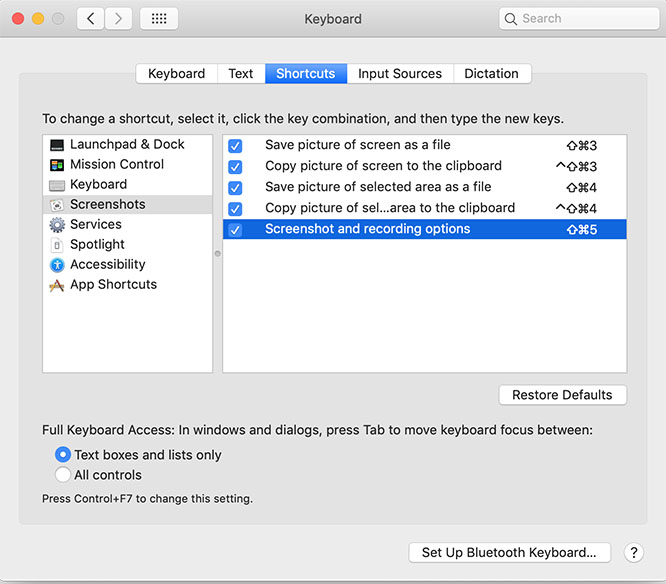 You can change the default shortcut using System Preferences.

NOTE: I prefer Option+2 simply because I can type it quickly using only my left hand. You can pick any shortcut that works best for you.

There are a number of screen capture utilities available in the Mac App Store. Most seem to focus on creating screen capture movies. Of the remaining utilities, I’ve looked at several and purchased two. Neither of them have the ability to:

Until I find one that does, I’m using Screenshot.