[This step-by-step tutorial provides an in-depth look at creating multicam clips. Once you understand how a multicam clip works, using this simple checklist will be faster. To see a video tutorial on multicams, click here.]

Adobe continues making improvements to multi-camera editing with the CC release, which they enhanced even further in the recent 7.1 update. An angle – think of an “angle” as a track – can contain audio, video or stills. In fact, a single angle can contain multiple clips. (This is a very cool way to use multicam editing to create a montage of stills.) A multicam clip can contain as many video streams as your system can support.

NOTE: The phrase: “that your system can support,” is very hard to pin down. Things that limit the number of video angles you can edit include: the complexity of the video codec, the data transfer speed of your hard disk, the speed of your CPU, the capability of your graphics processor, and whether all camera angles are the same image size, frame rate and codec.

As a general guide, you should be able to edit four streams of video using a single FireWire hard drive. A two-drive Thunderbolt RAID should allow you to edit up to eight streams. A five-drive, or greater, Thunderbolt RAID should allow you to edit more than 16 streams. (As always, these are estimates and reality has an ugly way of changing the situation. Experiment to see what works best with your system BEFORE you get on deadline.)

Clips that go into a multicam clip (which Adobe calls a “multi-camera sequence”) need to have a common sync point. The sync point provides a common starting point so that all the clips play back together, in “sync.”

Syncing using Timecode is the fastest. If you use clapper slates, it is easiest to mark the clap with an In. If you use markers, all markers used to indicate a sync point must have the same name. Syncing on audio is easy, but requires all cameras to have audio recorded on them, which rules out syncing still images.

NOTE: I don’t sync still images. I drag them into the multicam clip after it is built and position them manually, using Open in Timeline which I talk about below.

Whichever one of these options you pick, all the clips need to use the same method of syncing. I tend to use markers and I name the marker “Start” to indicate the sync point. 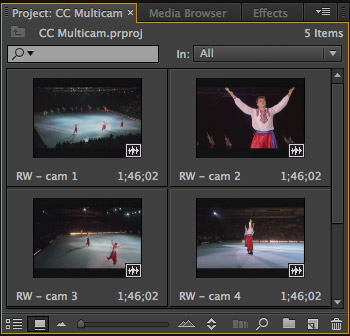 Here I’ve imported four clips of ice dancers that I want to edit. (This is from a show called “Moscow on Ice,” and is courtesy of Greene HD Productions (www.greenehdtv.com)).

I marked the sync point for each clip manually, using a marker that I named “Start.” I could just as easily have used an In or Out, but the benefit to using markers is that I don’t lose access to media before the In or after the Out. 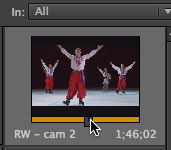 While you can set Ins and Outs using the mini-Timeline in the Project panel, you can only set clip markers using the Source monitor. Double-click a clip to load it into the Source monitor, position the playhead where you want to place a marker, then type the letter “M“.

To assign a name to a marker, make sure the playhead is parked on the marker, then right-click the marker itself and select Edit Marker (or, choose Marker > Edit Marker).

Give the marker a name in the Name field – in this example, I used “Start” – but as long as all clips use the same name for their marker, you can call the marker anything you want. Then, click OK. 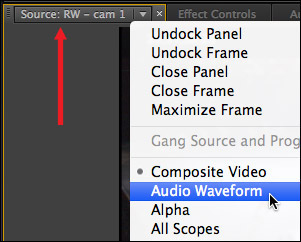 When syncing using clapper slates, it is often easier to sync by looking at the audio waveform than the picture. To see waveforms, right-click the clip name in the Source tab and select Audio Waveform. To switch back to viewing images, right-click the tab, again, to display the same pop-up menu and choose Composite Video. 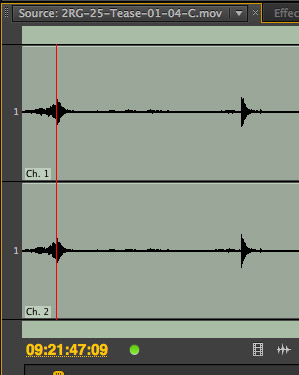 As an example from a different show, the playhead is parked on the clap from the first of two clapper slates. I was using the waveform because the camera wasn’t able to see the slate, but I still needed to sync the camera. 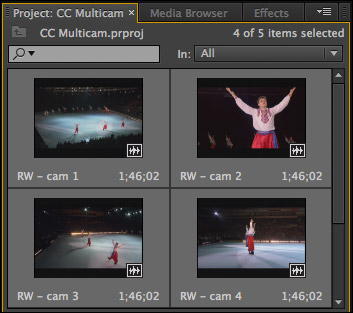 Once you have sync points set for all your clips, select them in the Project panel by either Shift-clicking, or Command+clicking, the clips you want to include.

NOTE: The order in which you select your clips is the order they will be displayed in the Program monitor, though a new feature in Premiere now allows you to change this display order. I’ll illustrate that in a minute.

With your clips selected, choose Clip > Create Multi-camera Source Sequence. (You can also access this menu by right-clicking one of the selected clips.)

NOTE: You must select at least two media sources (audio, video, or stills) to create a multiclip. 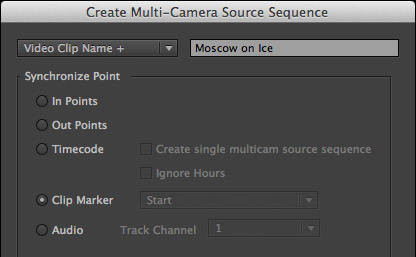 This displays the “Create Multicam” window. Give your multiclip a name and select how you want to sync your clips. Because all the clips have markers and all the markers have the same name, Marker is automatically selected. The default selection is to sync on the In.

NOTE: A new feature with the update is the ability to change how cameras are named. These three choices appear at the bottom of the Create Multicam window. There’s no correct answer in selecting these. Try all three and see which seems to work the best for you.

A new clip, representing your newly-created multi-camera sequence, appears in the Project panel. Notice that now we can hover-scrub it, with a new badge – indicating it is a multicam clip – displayed in the lower-right corner.

Another new feature now allows us to adjust the display order and active angles in the clip. Double-click the multicam clip to load it into the Source monitor. Click the Wrench icon in the lower right and select Edit Cameras.

NOTE: This adjustment can only be made when the multicam clip is loaded into the Source monitor. 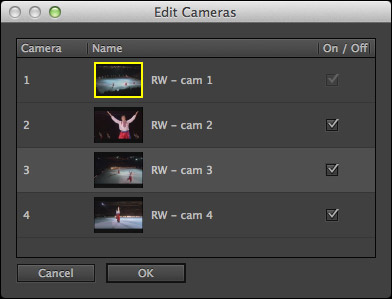 This displays the Edit Cameras panel. Drag the name of a clip up or down to change the order in which angles are displayed. Uncheck a check-box to make an angle inactive (invisible). Check it again to make the angle visible. When you are happy, click OK.

A multi-camera sequence is just that – a special sequence designed to contain multiple clips for editing. By default, a multi-camera sequence (which I’ll go back to calling a multicam clip in just a minute) only enables the audio on track Audio 1. This means that if you want to hear audio from any other track, you need to turn it on before you start editing the multiclip. 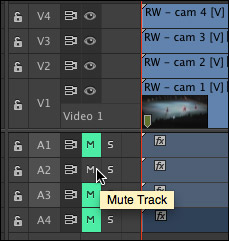 To do this, right-click the multicam clip icon in the Projects panel and select Open In Timeline. This opens the multicam clip into the Timeline and displays all the source files on separate tracks. This allows us to change which audio tracks are audible, add effects to individual clips in the multicam clip, or add additional clips to an existing track; for instance to add stills to existing clips.

NOTE: In addition to changing the active audio track, opening a multicam clip in the Timeline allows us to color correct a specific angle before it gets edited; for example, to correct a camera that was improperly color-balanced.

Once we’ve made all our adjustments to the master multicam clip, we can close the multicam tab at the top of the Timeline (this is optional, but decreases confusion). 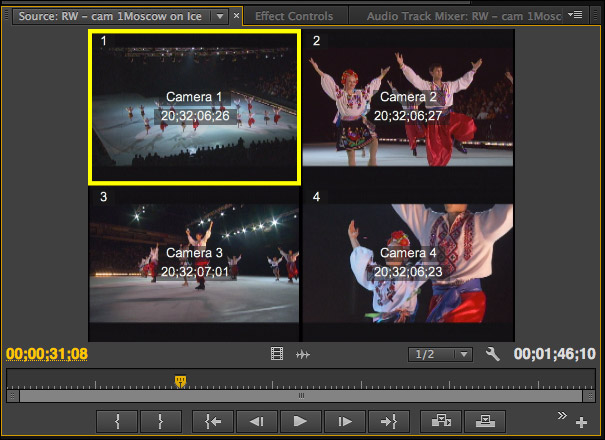 Double-click the Multicam clip in the Project panel to load it into the Source window.

Set an In and an Out, as you would for any clip, and edit it into the Timeline. A multicam clip can be a sequence by itself, or part of a larger project. From the point of view of editing, it acts just like any other clip.

A multicam clip in the Timeline has a different color than other media clips. 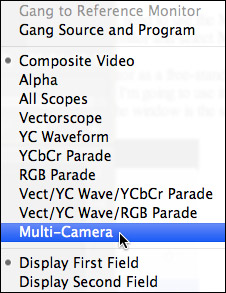 In order to edit a multicam clip, we need to use the Multi-camera Monitor. To display this, click the Wrench icon in the Program monitor and select Multi-camera. 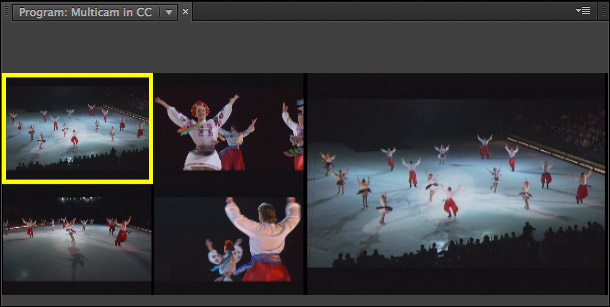 This opens a new view next to the Program monitor, where all the individual angles are displayed.

From the fly-out menu in the top right corner of the Program monitor, you can select whether audio will follow video; it is off by default. If you choose this option, the audio will change each time you change camera angles. For most of my editing, I don’t want this. Instead, I want the audio to stay with a single mixed audio track that I set when I opened the multicam clip into the Timeline.

NOTE: You can also find this option by right-clicking the multicam images themselves in the Program monitor.

Editing a multicam clip is easy. Position the playhead at the beginning of the clip, then, press the spacebar. As the video plays, click the image in the Program monitor to which you want to switch.

That cut is reflected immediately in the multicam clip in the Timeline.

NOTE: You can also switch shots by pressing the Control key and typing a number from 1 to 9 on the main keyboard.

We trim edits in a multicam clip in the Timeline just like any other edit. Here, for instance, I was late in cutting back to the wide shot, so I am rolling the edit point to correct this.

To replace an angle in the edited multicam clip with another angle, put the Timeline playhead in the shot you want to replace and click the new angle in the Program monitor.

To create an edit in an existing shot in the multicam clip in the Timeline, put the Timeline playhead at the point you want to create the edit and Command-click the new shot. An edit point is created at the position of the playhead and the downstream shot will be replaced by the shot you click in the Multi-camera Monitor.

WHEN YOU ARE DONE

Because Adobe is playing all streams at the same time as you edit a multicam clip, this can be very taxing on your storage.

Keep in mind that once you flatten a clip, you can’t reconstruct the multicam clip. So, save this step until you are sure you are satisfied with the edit.