You ever have a problem where the audio levels you recorded for your talent are too low, or vary wildly in level? Yeah, me too. All the time. We can add audio keyframes to each clip and try to smooth things out, but, frankly, life is too short.

A while ago, I discovered some audio effects that can make this task a LOT easier. In this article, I’ll show you how they work in Adobe Premiere Pro CC. (In a second article, I show how these work in Apple Final Cut Pro X.) While the concepts of improving audio are the same between the two software, the tools we use and the workflow we create are different.

NOTE: Personally, while the audio processing effects in both FCP X and Premiere aren’t too bad, I find that Adobe Audition is superior to both. While learning an audio app can be intimidating, the time you invest pays major dividends in making your audio sound really, really good. (Here’s a link to my training on Adobe Audition.) ProTools is another excellent audio package, but I’ve never had success working with their iLok copy protection.

The Multiband Compressor effect is my tool of choice in Premiere for boosting and smoothing levels.

In order to process multiple tracks at the same time, we need to combine them using an Audio Submix track.

Also, while it is a good idea to boost and limit dialog and narration, it is generally not a good idea to do the same with either sound effects or music.

NOTE: Here’s a companion article I wrote that is the second half of the “good audio” equation: using EQ to shape your sound to make it warm up a voice and make it more intelligible.

The human voice is an unquestionably challenging instrument to record. Whether singing or speaking, it has a huge dynamic range; meaning that it can vary from loud to soft back to loud in an instant. Sometimes, when you are working with professional voice actors, that dynamic range is fully under control.

Most of the time, we’re just hanging on for dear life.

There are two key rules you need to keep in mind about audio when you are mixing:

This means that during our final audio mix, we need to boost soft levels, make the levels consistent so that we can clearly hear what’s being said, yet make sure all levels always stay below 0 dB.

AN ASIDE ON MEASURING AUDIO

Audio pros, and those folks that need to deliver audio for professional distribution (broadcast, cable, or digital projection), measure levels using “average levels,” or the new standard of LKFS. Current standards in both the US and Europe mandate that levels not exceed a specific LKFS level for program content; generally around -24 LKFS.

The audio meters in Premiere measure “peak” levels, which are suitable for web posting. However, hidden inside Premiere is a really excellent Loudness Radar which measures average levels. I’ll show you where it is and how to use it in this article.

WHAT THE MULTIBAND COMPRESSOR EFFECT DOES

What the Multiband Compressor effect does is boost softer passages of audio more than louder passages, without having any audio level exceed the maximum level you specify in the effect.

What makes this different from a Limiter is that the Multiband Compressor boosts different frequencies different amounts, while still limiting the maximum volume of a clip. This tends to provide a richer, more “open” sound, when compared to a limiter.

In our example, this has the effect of making all dialog levels louder with more consistent levels, without any risk of distortion.

There are two limit settings that I recommend:

NOTE: The reason I don’t limit to 0 dB is that I’ve been told that MP3 compression is optimized for levels around -6 dB. Also, leaving a bit of headroom is a good idea in general.

The first thing we need to do is combine all the dialog tracks into one submix so that we can apply a single effect to control all our dialog. (This audio submix is often called a “bus” because it carries audio from a variety of origins to a single destination.)

NOTE: There is no limit to the number of buses you can create and, creatively, you may want to create a bus for all male voices, and a second bus for all female voices. I’m keeping this example fairly simple to make the technique more understandable. 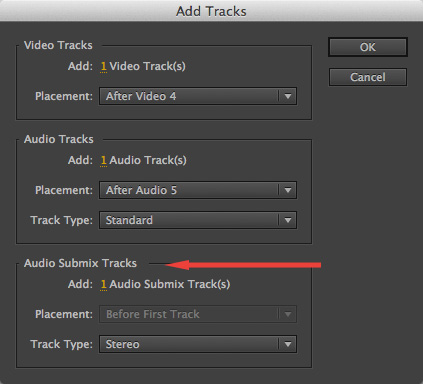 With the Timeline pane selected, choose Sequence > Add Tracks > Audio Submix. In this case, we’ll just add one track and leave the rest of the settings at their default. 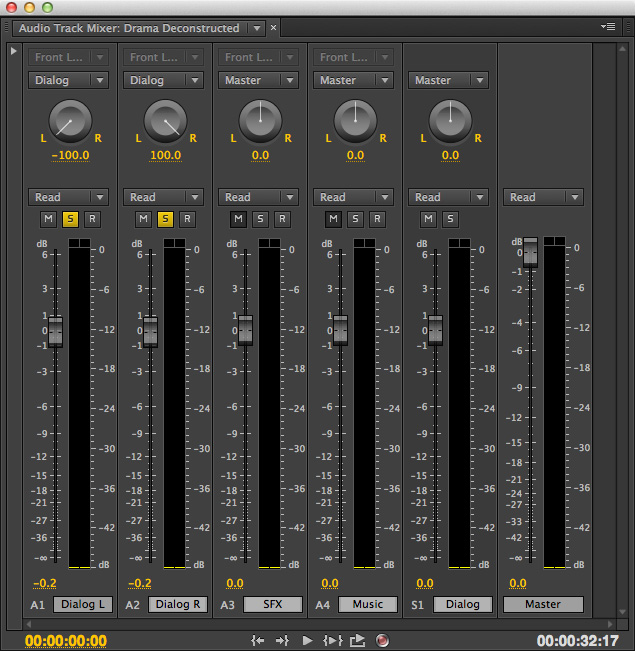 From the Window menu, choose Audio Track Mixer. This displays the mixer built into Premiere. Notice the names of the tracks along the bottom. To name a track, double-click the text and add the name you want; which is what I did here:

NOTE: If you only have one dialog track in your project, or just one narrator, you can skip this Audio Submix section and go right to applying the filter onto the single dialog track. Submixes are only needed when you need to combine audio from more than one track.

To send the entire output of a track, after the fader, to a submix, click the “Master” popup menu and change it to the name of the Audio Submix channel.

Set this channel Master popup menu to Dialog for both Dialog L and Dialog R tracks. 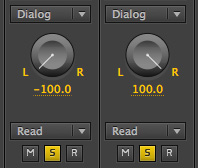 Click the “S” (for “Solo“) button at the top of the two dialog tracks so that you can hear them, but no other tracks. You have now “ganged,” or “grouped,” all similar audio so that it flows though a single channel, the submix channel called “Dialog.” 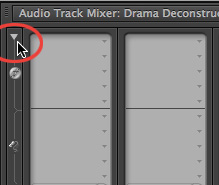 If the effect section at the top of the mixer is not showing, it’s a series of light gray boxes, click the small white arrow in the top left corner of the mixer to reveal it. 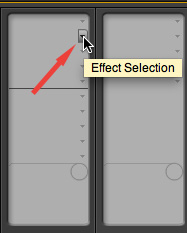 These gray boxes are divided into two sections:

Click the small dot on the right of the Effects section at the top of the Dialog channel and choose: Amplitude and Compression > Multiband Compressor. (To remove an effect, set this to “None.”)

This applies the effect to the Dialog submix.

The name of the effect now appears at the top of the Effects section.

NOTE: You can apply an effect to any of the five slots at the top of each channel. Empty slots are not a problem. However, effects process from top to bottom, so if you are applying multiple effects, the Multiband Compressor MUST ALWAYS BE at the bottom of the stack. Otherwise, you potentially lose its ability to prevent distortion. 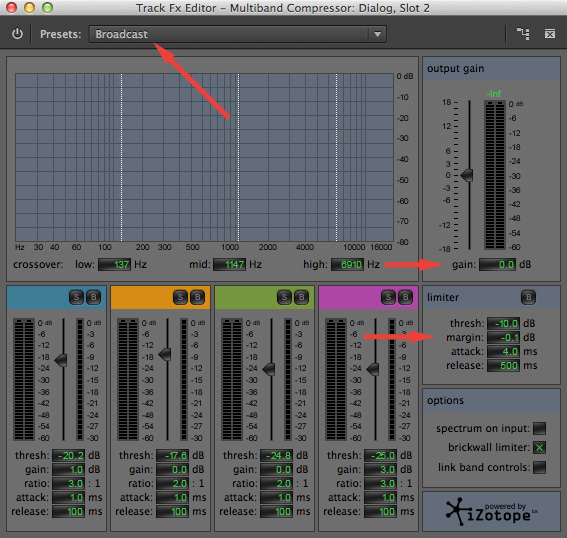 To display the filter so we can make changes, double-click the phrase “Multiband C” at the top of the Dialog channel strip. (I will confess that the first time I saw this effect, I panicked. However, there are only three adjustments you need to make to this effect for dialog.)

First, make sure the Preset is set to “Broadcast.” This is the default setting and sets all the green numbers in the filter.

Second, in the Limiter section, set the Margin to:

Mixing to -3 dB makes your narration louder because it doesn’t need to combine with any other audio elements.

Mixing to -4.5 dB leaves room for other audio in the project to be heard without running the risk of exceeding 0 dB and distorting.

Third, if the dialog audio is very low, increase the Gain (in the Output Gain section) until the audio meters are bouncing above -6 dB and the audio sounds good. There is no specific value to enter. Adjust and watch the meters.

NOTE: One of the benefits to using the Limiter effect in Final Cut Pro X is that it provides visual feedback to help you adjust the effect properly.

Keep in mind that most of your audio should sound a lot better as soon as you add the effect. However, for those clips that need extra attention, there are several places you can adjust audio levels.

The first is the Dialog submix channel. However, it is considered good practice to leave the submix channel set to 0 dB and, instead, adjust individual elements.

NOTE: Remember to turn off the yellow Solo button when you want to hear audio from all tracks. 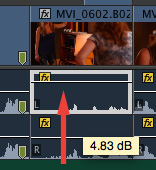 Or, go back to a specific clip in the Timeline and adjust the volume line. 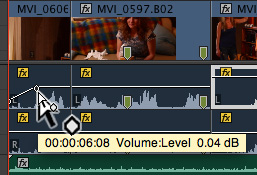 Or, add keyframes within the clip to make precise adjustments.

For the purposes of exporting, an audio submix track acts like any other audio track. 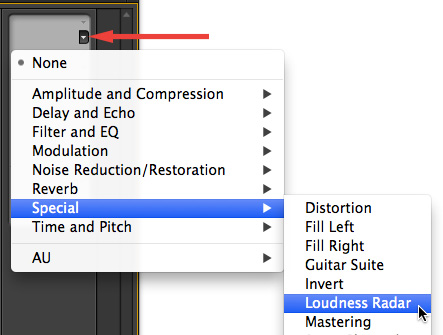 A benefit to mixing audio in Premiere (and Audition) is that both contain a built-in effect called the “Loudness Radar.”

To apply it, go to the Master track in the Mixer, and add: Special > Loudness Radar. 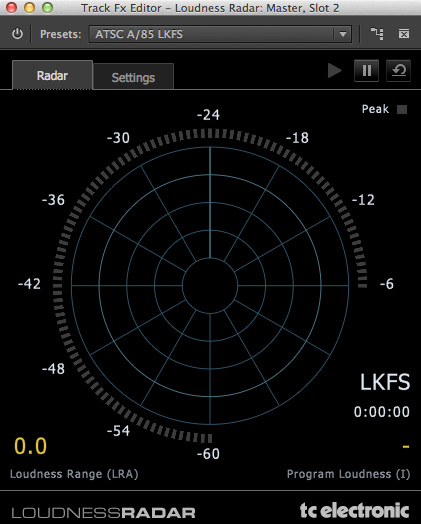 This measures loudness over time. To see the loudness of your project, play the Timeline and watch the meter. 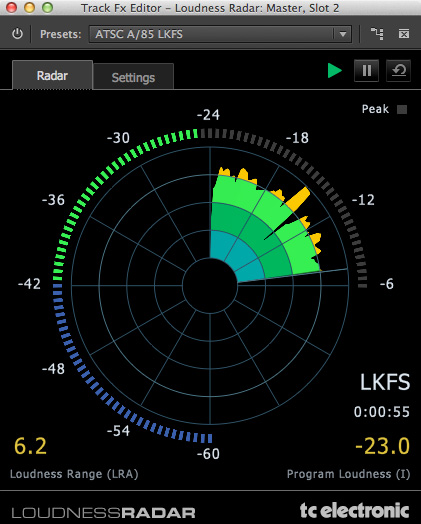 The basic goal, as I understand it, is to get the LKFS reading to hover around -24; it is displayed in the lower right corner of the display.

The polar chart displays average levels over time. Again, the goal is to get the audio to be close to the second-largest circle. Here, for example, everything looks pretty good, except for a spike that reaches out to the outer edge. To fix that, I would go back to the individual clip and tweak the level.

I’m still getting used to using this meter and will share more about it as I learn more.

The audio mixing capability inside Premiere is really very nice. I like the ability to create sub-mixes and, given all the regulations surrounding audio levels these days, I’m very impressed with the Loudness Radar.

However, the big benefit to using these effects is that they take the worry out of getting your audio to sound good. The Multiband Compressor boosts soft audio and corrals excessive audio, all while guarding against distortion.

It will take a bit of time to get comfortable using these filters, but I guarantee that your projects will be better for it.