One of the big new features in Premiere Pro CS6 – in addition to the spiffed up interface – is trimming. Trimming is the process of adjusting where two clips touch and Adobe has made some major changes in this area.

To me, trimming makes the difference between a scene that “almost” works and a scene that flows so smoothly that you don’t notice the edits. The problem is that deciding where to place the edit point can take far longer than figuring out which clip goes first.

So, anything that helps speed the process of trimming is a good thing, and the latest version of Adobe Premiere Pro goes a long way to faster trimming.

WHAT CAN WE TRIM? 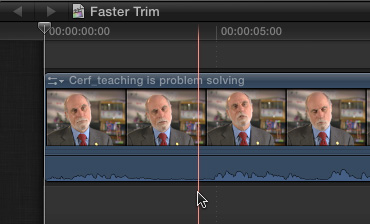 There are really only three things that can be trimmed at an edit point (the place in the Timeline where two clips touch):

If you drag the Out to the left to make a clip shorter, without moving the clips to the right, that’s called “Trimming the Out.” The problem is that you can only make the out-going clip shorter and you always leave a gap. (Gaps are BAD because they cause flashes of black during playback.)

If you move the Out and, at the same time, want to shift the position of all clips to the right, that’s called a “Ripple trim to the Out.” You can make a clip longer or shorter using a Ripple trim and it does not leave gaps. However, it does reposition all the downstream clips in your timeline.

If you move the In to the right to make a clip shorter without moving the clips to the right, that’s called “Trimming the In.” The problem is that, as with the Out, you can only make the in-coming clip shorter and you always leave a gap. (Note to self: No gaps.)

If you move the In and, at the same time, want to shift the position of all clips to the right, that’s called a “Ripple trim to the In.” You can make a clip longer or shorter using a Ripple trim and it does not leave gaps. However, it does reposition all the downstream clips in your timeline.

That’s it. While you can add other clips on other tracks, trimming is really very, very simple. However, like the game of Go, in that simplicity lies a stunning amount of creative complexity. Fortunately, in this article, I don’t need to describe the creative ramifications of trimming, I just need to show you how it works.

NOTE: By the way, thanks to Miles and Fran Hale of Model Railroad Builders for permission to use their footage! (www.modelrailroadbuilders.com)

Trimming, in Final Cut, is based on what you select. Trimming in Premiere Pro is based on a contextual menu choice.

For example, here I’ve selected the Out of the out-going clip (the last frame in the shot). When I drag the Out left, it shortens the end of the clip. 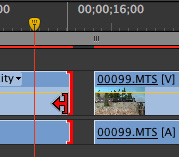 And when I let go, it leaves a gap. Bad gap!

Instead, AFTER I select an edit point, but BEFORE I move anything, right-click the selected edit point and select what you want to trim. 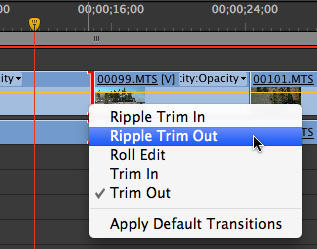 The default setting is to trim the out, which leaves a gap. However, if you select Ripple Trim Out, you can move the Out, and ripple (which means move) all the downstream clips so that there is no gap. 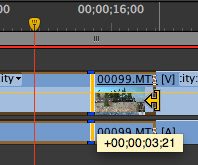 When you select a Ripple trim, the selected edit point turns yellow, indicating a Ripple is in place and you can make a clip longer or shorter. The yellow tool tip shows you how much you’ve moved the selected trim point.

NOTE TO ADOBE: These yellow tool tips are REALLY annoying – they come up too fast and stay up way too long. I love them, but they are far too “in my face.”

This system works great – but it requires dragging the mouse, and it is only as accurate as you can drag the mouse.

PLAN B – USE THE KEYBOARD

Once you’ve selected the edit point and chosen how you want to trim, press Option+left arrow to move the selected edit point one frame to the left.

Press Option+right arrow to move the selected edit point one frame to the right.

So, here’s another option – use your keypad. Much faster and much more accurate. Here’s how.

Select the edit point with the mouse, as you would normally.

NOTE: Unlike Final Cut, Premiere does not have a default keyboard shortcut to select the next edit point. However, it DOES have five unassigned keyboard shortcuts so you can create your own shortcuts. Select Premiere Pro – Keyboard Shortcuts and search for “Select.”

COOL TIP: If an edit point is already selected, pressing the Up/Down arrow key jumps the playhead to the Previous/Next edit point and, also, selects it.

Once the edit point is selected, right-click and choose the type of trim you want to use.

Then, on the numeric keypad, type the number of frames you want to trim the selection.

Type PLUS followed by a number moves the playhead to the right the number of frames you entered.

Type MINUS followed by a number moves the playhead to the left the number of frames you entered.

Press the ESC key if you entered this trim mode by accident.

This is a really fast way to trim – much faster than using the mouse. I’m a big fan of this technique.

Hold the Shift key down and select multiple edit points in the same track. Now, you can trim ALL SELECTED edit points at the same time, using the techniques we just discussed.

Wow…! Everything I’ve ever trimmed, I’ve trimmed in slow-motion.

What is the meaning of this insight? I scoured my house, counting all my Oscars. Um, zero. Then, I went to IMDB and counted Walter’s Oscars – 3 awards, with 8 nominations.

I went back into my edit suite, did some tests, and discovered that when you trim an edit in real-time, the edit points are not the same as when you trim them in slow motion. The edits aren’t different by much, but they are different. And the edit trimmed in real-time feels perceptually smoother.

This caused me to create Larry’s Corollary to Walter’s Theorem:

When a cut occurs, it takes a fraction of a second for the brain to perceive that a cut occurred. During that time, the video is playing. By trimming in real-time, you compensate for that lag in the brain as it catches up with your shots.

This is why really fast cuts are so disorienting, the brain can’t catch up with the action and just gets more and more confused.

AN ADDITIONAL  THOUGHT ON REAL-TIME TRIMMING: If you are cutting action, real-time trimming can make a difference in your edits. However, this is not the case when trimming audio. It is a pain in the posterior to trim audio in real-time; reading waveforms is far easier. So, if getting action to look great is at the core of your edit, give real-time trimming a try. If the audio is driving your edit, don’t fret. Watch the waveforms, don’t worry about real-time and your audio trims sound great.

Premiere allows us to trim in real-time. Here’s how.

Double-click an edit point. This opens the Trim window in the Monitor.

To Ripple trim the Out, click the left image. See the blue bar at the bottom? That indicates you are trimming the Out.

To Roll trim, click the vertical dividing line between the two images. Now the blue bar extends under both clips.

You can trim by clicking the numbers in the Trim window, but that doesn’t do anything in real-time.

Repeat until you are happy with the position and “flow” of the new edit.

Click anywhere outside the Monitor window to close the Trim window. (Final Cut editors will be at home with this process as it mimics the Trim Edit window.)

The key thing to keep in mind when trimming is to select the edit point, THEN right-click to determine what type of trim you want to perform. After that, the technique fades into the background, leaving you free to work your creative magic. 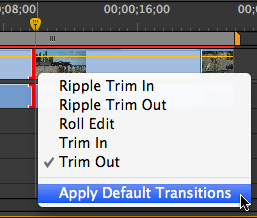 EXTRA CREDIT: A fast way to add the default transition is to right-click the edit point and select Apply Default Transitions.

You can also do the same thing in the Trim window by clicking the center button.

WANT MORE? By the way, I just completed a detailed video training showing how to get started with Premiere Pro and showcasing the new editing and trimming features in it.  If Premiere is in your future – check out my training!