Pick Fonts for Emotion and Power

NOTE: Helvetica was designed in 1957 by Max Meidinger as a “neutral typeface that had great clarity, no intrinsic meaning in its form and could be used on a wide variety of signage.” (Wikipedia). Linotype named the design “Helvetica” in 1958.

Emotion is a key element of many of the stories we tell in pictures. We spend hours thinking about sets and costumes and lighting – all to convey a feeling – yet miss the obvious emotions that can set a tone right at the beginning of our project by picking the right fonts.

While a study of typeface design can fill a book – and, in fact, has filled many – here are some key ideas to think about.

There are four broad categories of fonts:

Serif fonts have little “feet” at the ends of each character. This aids the eye in moving from one glyph (letter shape) to the next.

These letterforms originated with the Romans carving words into stone.The outlines were first painted onto the stone, then the stone carvers followed the brush marks adding flares at stroke ends and corners, creating serifs.

For example, look at the feet at the bottom of the “A” or the jaws of the letter “C.” Another attribute of serif fonts is the different thickness in the character shape, easily seen in the letter “e”.

Sans Serif fonts are, surprisingly, fonts without the little feet. (“Sans” means “no” – therefore, no serif.)

Notice how clean each letterform is, no feet, with very even widths across the entire glyph. Compare the letter “e” in Baskerville (serif) to Century Gothic (sans serif).

Script faces are designed to look like they are hand-drawn. Some are very formal, while others are very casual. 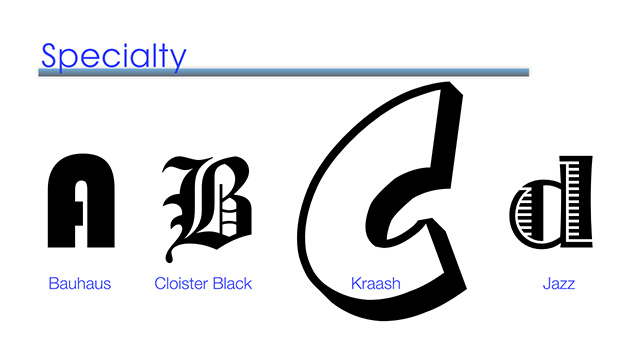 Specialty faces are very egocentric – they purposefully call attention to themselves – as you can see here. These fonts are designed to leap off the page, grab you by the throat and shake you until you pay attention.

Subtle, they are not.

There’s one other characteristic of fonts worth considering: letter-spacing. Those of us “of a certain age” may remember mechanical typesetting machines called “typewriters.” (Yes, these primitive machines did exist – I used them for years.) 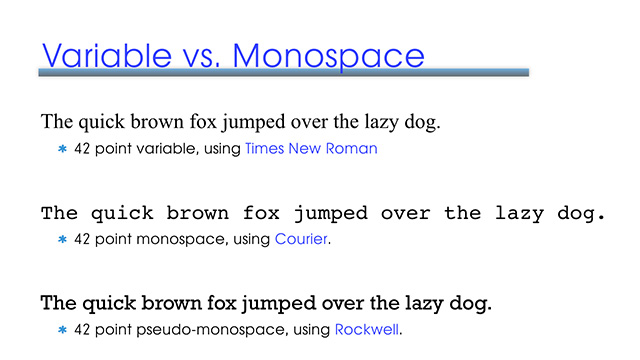 Here are examples of monospace, where each letter is the same width (similar to a typewriter), variable, and pseudo-monospace. Rockwell emulates the look of a typewriter, while still saving space on the line.

The big advantage of monospace is that it is easy to create type with a mechanical device like a typewriter. However, variable fonts cram more letters into the same amount of space, saving paper for books, or making the text easier to read on screen. 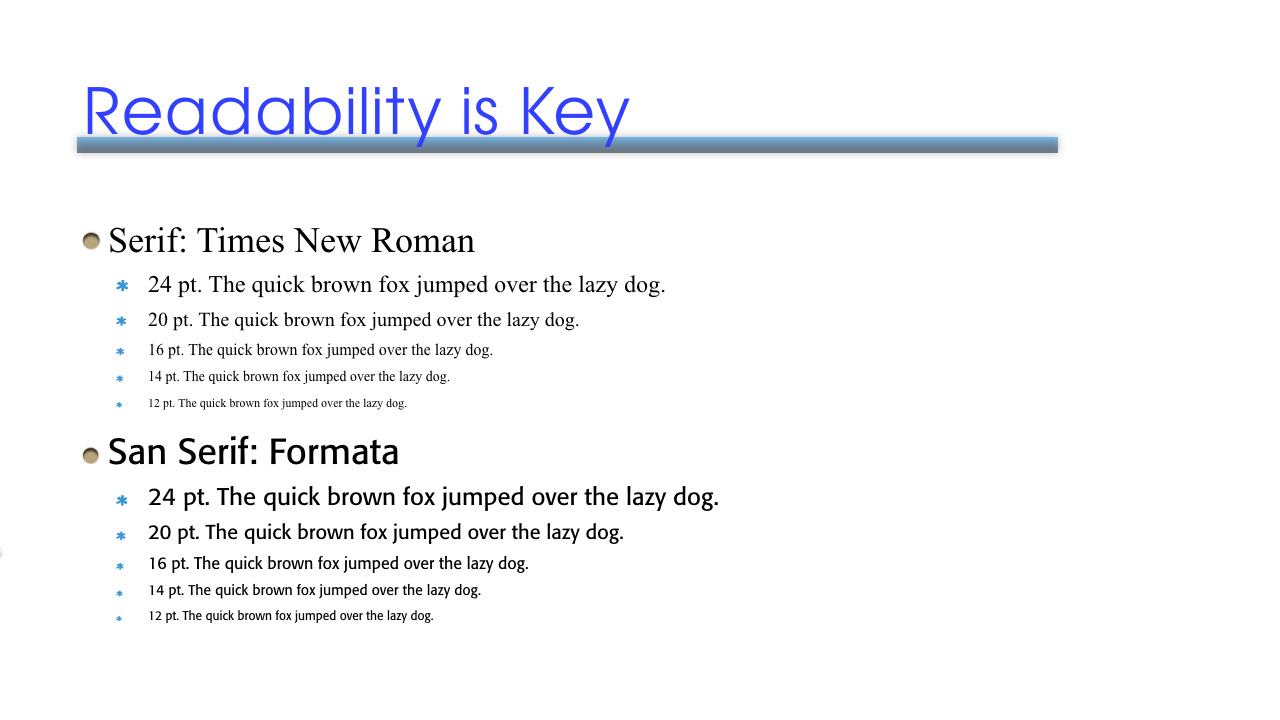 (Click to see a larger version of this image.)

Here’s what I mean by readability. Notice how you can read sans serif fonts more easily at smaller point sizes than serif fonts. When it comes to video, this readability makes a big difference.

Emotions that we associate with Serif fonts include:

Typefaces in this category include:

There are many others, which you can spot easily browsing through a font menu

Personally, I don’t recommend Times New Roman. Like Helvetica, it is over-used and very hard to read at smaller point sizes. Trajan is nice, but only exists as all caps.

Emotions that we associate with Sans Serif fonts include:

Emotions that we associate with Script fonts include:

Emotions that we associate with Specialty fonts range widely because there are so many different designs to choose from. These should be used in large point sizes only, and limited to main titles.

Keep in mind that video, when compared to print, is low resolution. A half-page high quality magazine ad is roughly 56 megapixels. An HD video image is about 2 megapixels. There isn’t a lot there. This means that ornate typefaces will not look as good in video as they do in print. Additionally, because text in video is only up for a few seconds, legibility is critically important.

Text in media needs to be selected both for its emotional content and its ability to be read quickly.

Here are some ideas to consider when choosing a font:

If you are animating text, bring the text in from the right edge. In most western countries, we read text from left to right. By animating from right to left, you give the audience an extra second or two to read the text before it disappears. 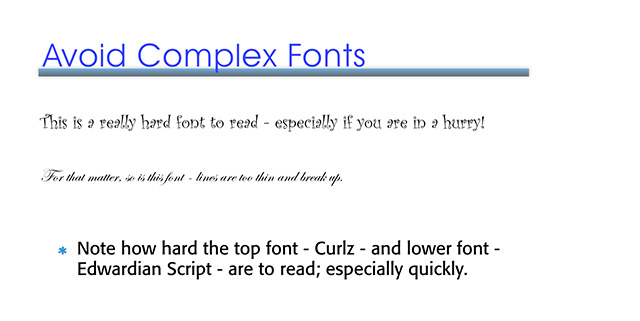 Another cool psychological tip is that things seem easier to do when the instructions are easier to read.

Some producers are trigger-happy, they want text on screen as briefly as possible. But, think about this for a minute, we use text to tell the audience something that they can’t learn any other way – like the location of a shot or the name of a guest.

There is no value to the audience in having text flash on and off screen so quickly they can’t read it. You’ve been staring at this title for weeks, they only get a few seconds, give them a chance to actually READ it! 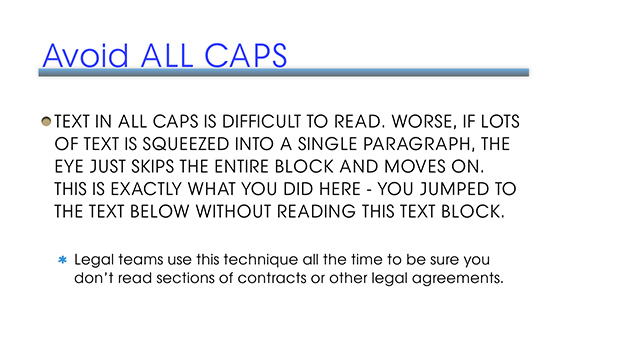 See, you just skipped over this text. Why? Because it is in all caps. No one reads text in all caps. Be very, VERY careful putting any text you want the audience to read in all caps.

Typeface design is a fascinating subject. With so many fonts to choose from, and each one carrying its own emotional values, both you and your audience will benefit by expanding your font horizons and experimenting with something new for your next project.

3 Responses to Pick Fonts for Emotion and Power