Kyno is a media management, screening, logging, organization and transcoding application for anyone working with video and images. It supports a wide variety of industry-standard formats and integrates seamlessly with Adobe Premiere Pro and Apple Final Cut Pro X.

Last week, it was updated to version 1.2 with a host of new features:

Robert Krüger, managing partner at Lesspain Software, commented to me in an email:

“This update comes a little more than two months after our 1.1 update. On top of a large number of general improvements and bug fixes, this release brings a few notable big points. For workflows involving subclipping, transcoding or rewrapping Kyno now offers a number of powerful new options for professionals dealing with large amounts of footage in their projects. Transcoding now allows for handles (i.e. extra space for adding transitions in the edit) to be added automatically when exporting subclips, even in batch operations. The handling of batch subclip export has become even easier than before allowing the user to select the wanted portions either using in/out points or by defining subclips. This feature is especially useful for people dealing with footage where only very small portions of clips are actually used, which is very typical for documentary work, drone or action cam material or long interview takes. To complete these export/transcoding/rewrap improvements, there is now greatly increased flexibility regarding the handling of file timestamps or timecodes in all of these operations.

“Final Cut Pro X users will be very interested in this release as it features a complete overhaul of the FCP X export workflow. To cater to different preferences of professionals out there, the way Kyno translates its metadata to Final Cut Pro metadata is now configurable in virtually every aspect. E.g. people who prefer working with keyword collections, can use those for time range metadata whereas people preferring favourites, can use them for things like QC comments or interview transcriptions. This way Kyno offers the best of both worlds, i.e. traditional metadata and FCP X metadata in a flexible and powerful workflow, adding value to Final Cut’s already powerful metadata features and being easier and faster to handle than ever before after the FCP X export user interface has been completely restructured. 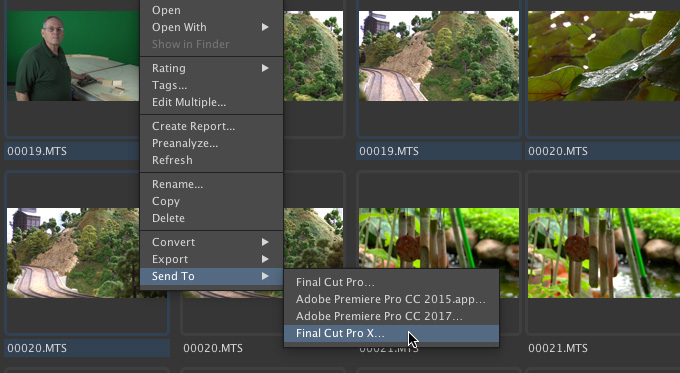 Right-click (Control-click) any of the selected images and choose Send to > Final Cut Pro X. (You can also send these to FCP 7, as well as current and earlier versions of Premiere). 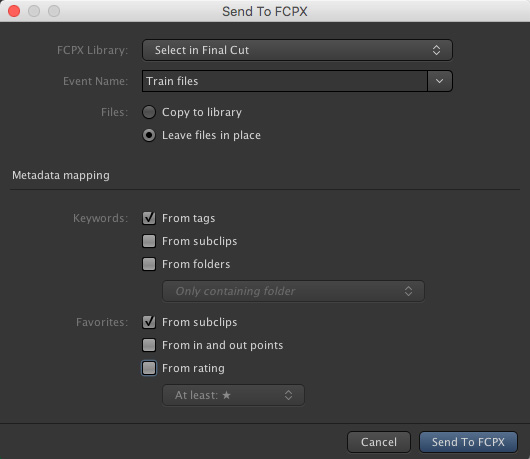 You can either add the clips to an existing library or create a new one. As you can inside Final Cut itself, you can import or link to the files, decide what to use for keywords, and create Favorites from a variety of options.

Click “Send to FCP X,” and the application will automatically start Final Cut, create a new library or open an existing one, then import the clips.

Notice that even though the source media clips all had the same name (00027.MTS), each of the clips was imported successfully and given a unique name inside FCP X.

If Final Cut is running, the import process only takes a few seconds; otherwise you need to wait a bit longer for the application to launch.

The process is similar, though with fewer export options, when sending files from Kyno to Premiere Pro. 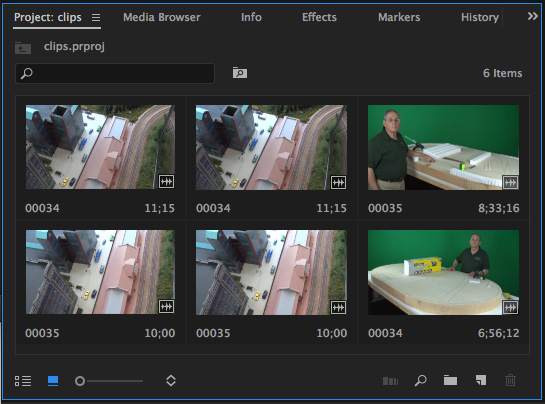 And, with Premiere, it is equally speedy and handles clips with duplicate file names with aplomb.

You can use Kyno to convert (transcode) media from one format to another, without using Compressor or Adobe Media Encoder.

You can tag and rate clips in a variety of ways to simplify searches, while its search capabilities are stunning for both speed and versatility.

Here’s an article I wrote about the first version that provides more details on its search and subclipping capabilities.

Kyno is the most full-featured media management system I’ve ever seen. It has a 14-day free trial and, at $159 (US), it has a price that won’t break the bank.

The update is free to registered users and can be accessed from within the application using Kyno > Check for Updates.

Here are the full release notes for this version.