Adobe described the changes in their blog: “We want Premiere Pro to become a more intuitive, yet powerful editing tool that is ready to meet the demands of tomorrow while also helping today’s creators to meet the demands of delivering high-quality content at quick turnarounds and optimizing content for multiple social platforms.

“This interface refresh is a journey that has been a long time coming. It’s a nuanced challenge to take a thirty-year-old app and modernize it for new types of video content (like social video which simply didn’t exist when Premiere Pro was first built), while respecting the needs and demands of traditional post-production.

“…A guiding philosophy behind the refresh is to keep what people love the most about Premiere Pro, while adding in what we’ve learned over the years to make it better…. We’ll be rolling out these new experiences on a timeline starting with this public Beta to ensure that our customers can provide feedback, explore the changes and continue to use Premiere Pro to its fullest potential. These changes are additive and not a replacement to current workflows. We understand how important muscle-memory is and we don’t want to disrupt your flow in any way.” (Adobe blog.)

NOTE: Beta software, by definition, is unstable and likely to change. You can install the beta version without losing access to the current release of Premiere. However, use beta software only for exploration and experimentation because there is always the possibility of losing your work due to a software bug.

First, and most important, everything you’ve been able to do in the past in Premiere remains the same. Adobe didn’t remove anything.

What they did was to add a visual front-end to media import that allows you to see all available clips, select the clips you want to bring into a project, then, automatically create a sequence based upon those clips without first requiring stepping through any menus.

This interface is designed for visual media, it won’t work effectively for interviews or other talking head-type material. At this point, this new interface does not show audio waveforms.

The workflow now is to either create a new project or open an existing one. At which point, you are taken to the import screen illustrated above. From this, you can select the clips you want to import into your project.

NOTE: The Media Browser remains intact, but not part of this interface window. 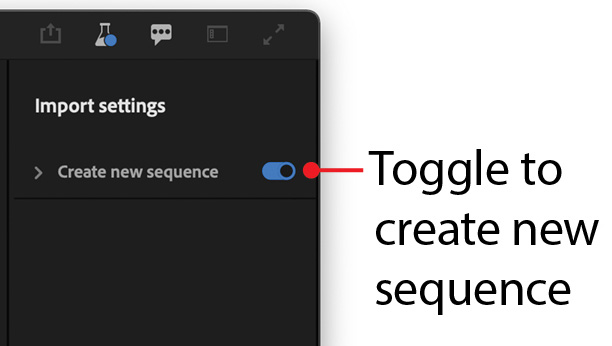 Selected clips are collected into a “tray” at the bottom of the import window (see screen shot below), then added in the order you selected them into a new sequence.

If you don’t want to create a new sequence – for example, to import clips into an existing project – deselect Create new Sequence (see screen shot on the left).

This new sequence is configured as though you dragged a clip into an empty sequence.

For those who, like me, frequently need to create sequences that are different from the clips we are editing, we can bypass this entire step by clicking the blue Create button in the lower right corner, as illustrated by the screen shot on the left.

Clicking this button allows us to bypass this new interface and use the interface tools Premiere has always offered.

NOTE: Here’s a video from Adobe that showcases the new import workflow. 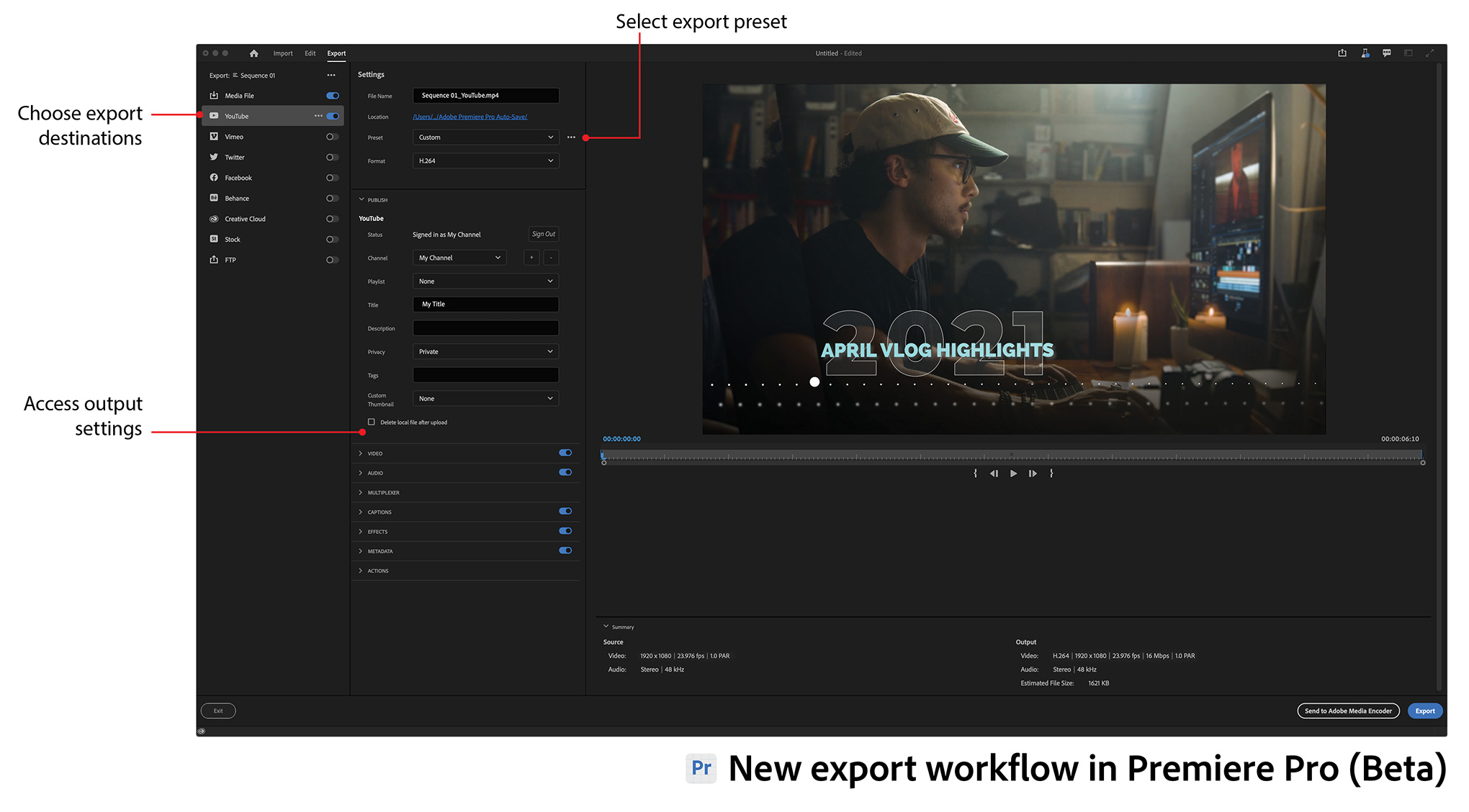 Like import, export was enhanced in this beta release. Adobe’s goal was to focus on speed and simplicity.

“The new export workflow streamlines the process of delivering completed videos by focusing on the destinations of the content. Optimized render settings for popular social platforms like YouTube, Facebook and Twitter are presented. Advanced settings are easily accessed for customizing exports.” (Adobe Help) 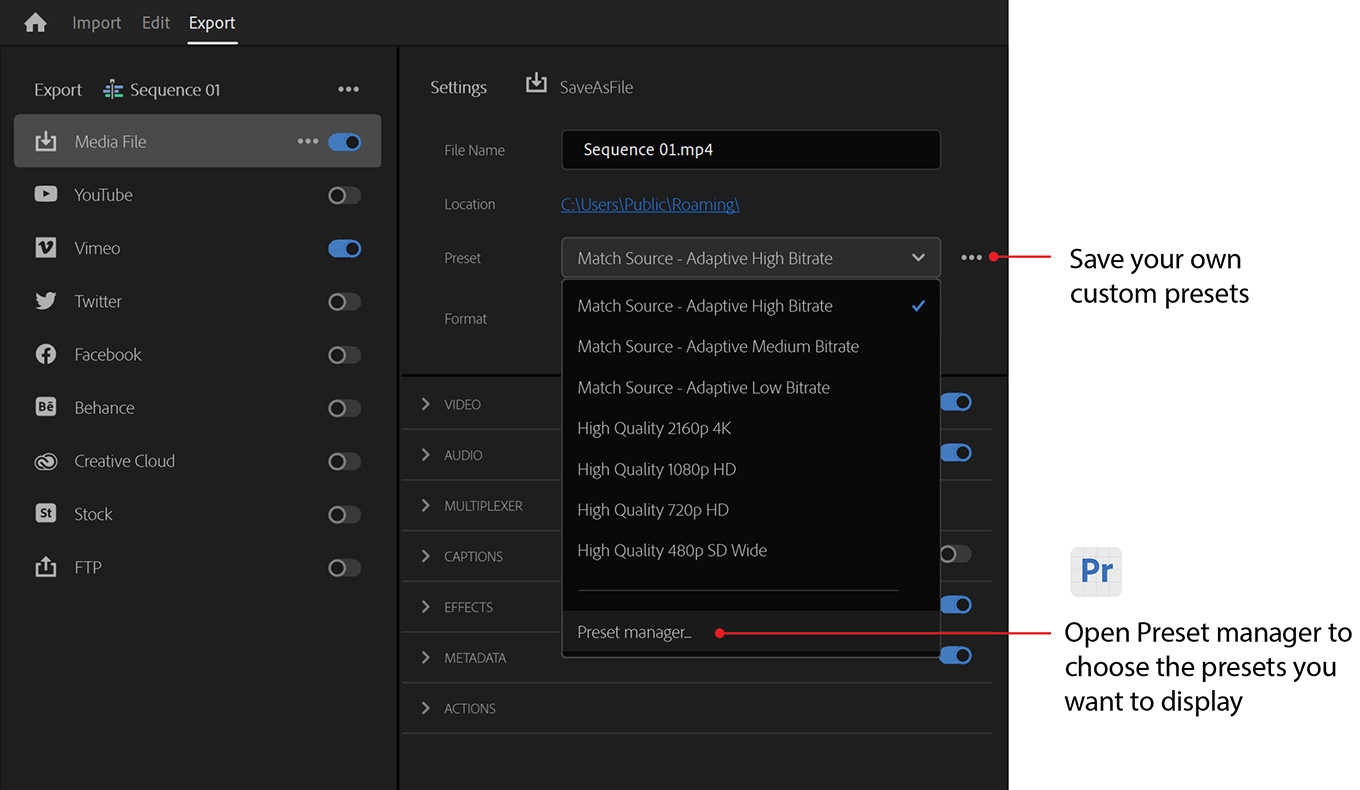 Select the sequence you want to export, select the destination, click Export.

NOTE: Here’s a video from Adobe that showcases the new export workflow.

Finally, though it seems the least significant of the new features, I think the changes Adobe made to the header bar are highly indicative of where they are going.

For the last several years, Adobe has worked to clean up the Premiere interface. Similar to what Apple did in re-thinking the Final Cut Pro interface, Adobe keeps finding ways to remove clutter, improve features and speed operations. Unlike Apple, though, Adobe is making these changes incrementally, while maintaining compatibility with past projects and media. A lesson Apple did not learn until too late.

Workspaces were moved to their own menu, a full line of text was removed and the overall look was improved. The “new header bar is designed to seamlessly integrate the core phases in the editing process: Import, Edit, and Export. A task-specific workspace dropdown menu and Quick Export are accessible directly through the header.” (Adobe blog)

With this release, Adobe now provides early access to the Speech to Text feature to all Adobe Premiere Pro (Beta) users.

From my perspective, these new changes are welcome. Premiere Pro has long been a capable editor, but it is hard to learn, often hard to use and frequently unstable. It needed renovation.

While all of us would like these changes to happen immediately, Adobe is wise to take it in smaller steps. Make the changes, allow users to adjust their workflows and comment, then, make more changes. All while maintaining backward compatibility. Not an easy challenge.

I’m very interested in seeing where Adobe takes us in the future.