There are lots of new features in this version. Let me share what I’ve learned. 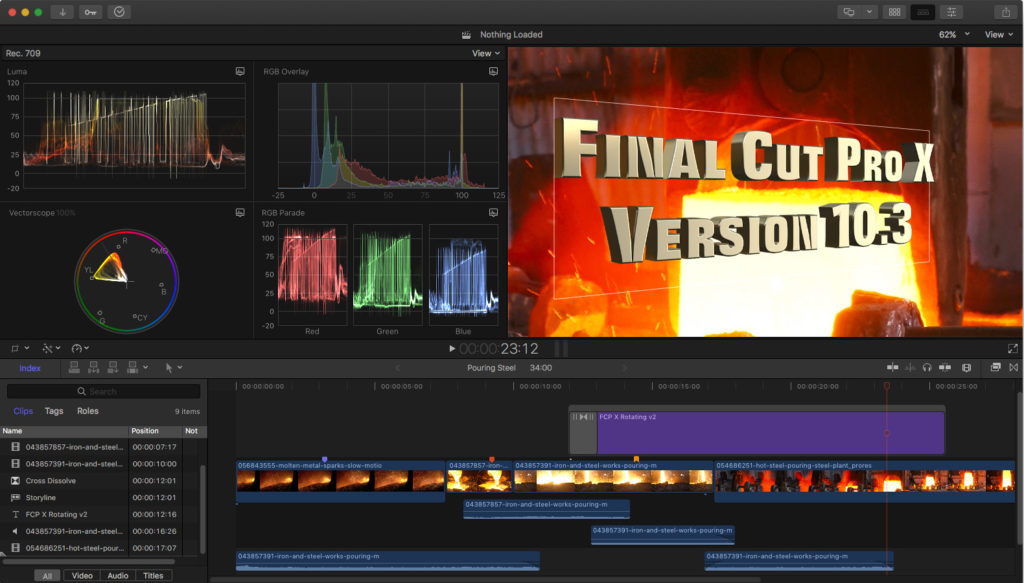 Apple’s marquee features for the software include:

Within those three categories are literally dozens of changes.

From my point of view, the interface changes are the most visible, the changes to Roles and the Magnetic Timeline are the most significant and its support for Rec. 2020 video the most future-oriented.

NOTE: At their announcement this morning, Apple highlighted the new Touch Bar on the MacBook Pro. While this feature looks interesting, I haven’t used it, so I haven’t included it in this article.

HDR (High-Dynamic Range) media is video with an extended gray-scale and color saturation. We are in a transition phase now – both in technology and terminology.

First, the terms. Wide color gamut video is the color space portion of HDR, which is defined by a new video spec called “Rec. 2020.” This is similar to Rec. 601, which referenced standard-definition video, and Rec. 709, which applied to HD.

Rec. 2020 covers UHD, 4K, and HDR media. It describes pixels with a larger image size (“more pixels”), an extended range of gray-scales (“brighter pixels”), and great color saturation (“richer pixels”). Not all video formats contain all three. Some, for instance, just support bigger frame sizes. In general, moving forward, we will probably refer to video as Rec. 2020, which is a more inclusive term.

The new 10.3 version of Final Cut and ProRes both support 16-bit video. However, our computer monitors can’t yet display it. While all current Macs CAN display a more limited representation of this extended video called “P3,” to see the full glory of Rec. 2020 media requires an external video monitor.

Final Cut 10.3 fully supports Rec. 2020 video displayed on an external monitor. In fact, the system automatically senses the correct color space – 601, 709, 2020 – and configures appropriately. Yes, you can override this. Color space can be set for the Library or the Project.

NOTE: Here’s a graph comparing color spaces (scroll down about halfway). And here’s a brand-new white paper on color space from Apple with much more detail.

In short, the interface is darker, video looks better and everything has moved somewhere else.

The Final Cut interface, which was already dark, has gotten darker. This makes video seem to “pop” off the screen, both for normal HD footage as well as a demo I saw using 12-bit video.

As I was editing with it, I realized that I needed to make my edit suite darker in order to see the screen better. The interface has become a series of medium gray shapes on a dark gray background. This had the advantage of improving the look of my video on screen, but but the dimness made it harder to read my paper notes.

Apple has moved all the clutter from the middle of the screen to the edges:

However, there are a number of very welcome changes:

The new workspaces are REALLY neat! The ability to hide the Timeline makes logging so much easier, especially on smaller screens. And seeing the entire Inspector at a glance is extremely useful. I’ve become a huge fan of these changes.

ROLES HAVE A NEW ROLE 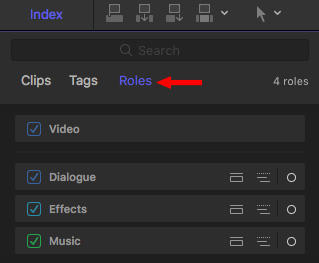 Roles have moved from “nice to know,” to essential; especially for audio. Roles are now color-coded so you can see your audio layout at a glance, grouped by dialog, effects and music.

You can now shuffle audio layers by group – move all sound effects to the top of the Timeline to help with syncing, for example. In fact, Roles will automatically move similar clips into similar locations in the Timeline.

You can group similar audio into “lanes” in the Timeline, automatically, without dragging.

Clicking the Focus button highlights specific audio and collapses everything else.

We can instantly group similar Roles – say all dialog – into a compound clip and apply an audio filter to the compound clip. This is a very innovative way to achieve what amounts to a submix bus, without the work.

Roles can be color-coded and you have a palette of colors to choose from for a role.

Roles can be managed at the Library or Project level, you can create as many Roles as you need, and Roles can have sub-roles. For example, a Title Role, can have sub-roles of “English,” “Spanish,” “French,” allowing you to enable each language with a single mouse click, even if dozens of titles are involved.

The features Roles provide are deep and sophisticated. It’s going to take me a couple of weeks to really understand these. I’ll have more on Roles in future articles.

Yes, I agree. Changing the interface is always risky. (Especially when it forces me to re-do all my training because everything now looks different.) But there are lots of small touches that I really like.

This is SO MUCH easier than selecting a clip and typing Control + D just to see a duration; though Control + D still works. 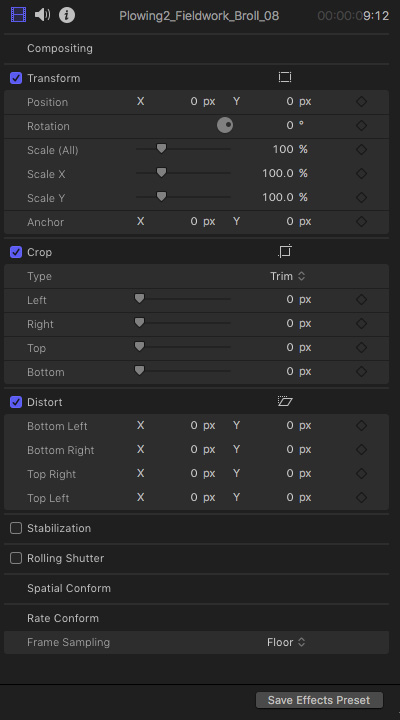 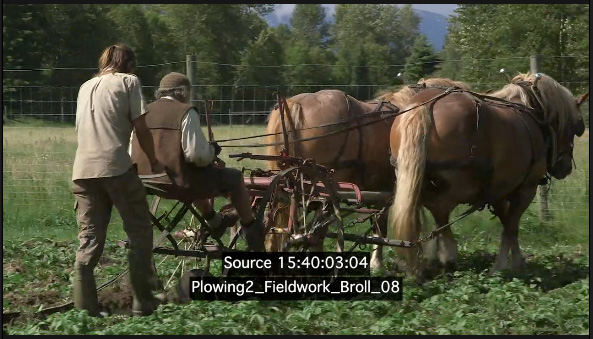 There’s a new effect that displays source timecode on clips in the Timeline. (And I say again: !!!) This makes creating client review movies dead easy and practical again.

NOTE: You can apply this effect easily using an “adjustment layer.” This article explains how to create one in Final Cut.

[ By the way, thanks to the folks at EditStock for the use of these images: EditStock.com.]

We can copy and paste timecode! 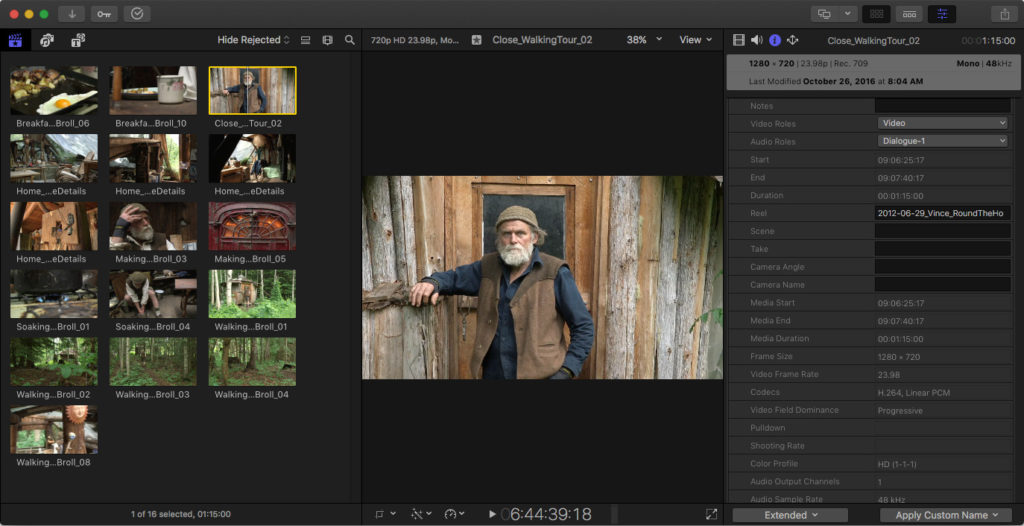 The logging workspace (called “Organize”) is optimized for small laptop screens. It hides the Timeline, while enlarging the Inspector. I now find this layout indispensable. 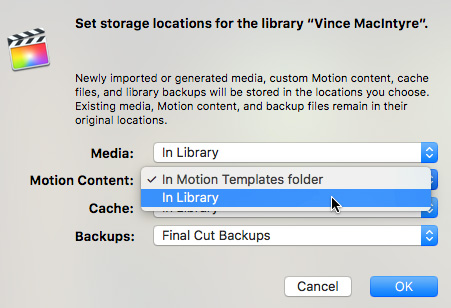 Custom Motion projects can now be stored in the Library. This greatly simplifies moving Libraries from one system to another without having to remember to include all those custom files from your Home directory. 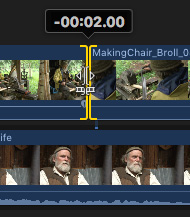 We can now trim adjacent connected clips without first converting them into a connected storyline. Faster. 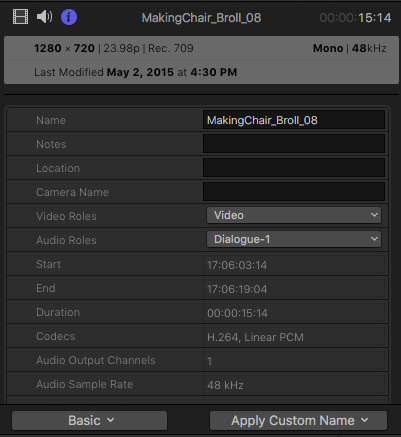 The Overwrite edit now has its own icon.

There’s a new “Flow” transition, very similar to Morph in Premiere Pro, that blends two clips to hide a jump cut. While I have ethical issues about using this in news or documentary projects, the same as I do with Morph in Premiere, this can solve problems with dialog where you didn’t get enough coverage.

NOTE: Unlike Morph, which pulls frames from elsewhere in a clip, Flow uses optical flow to create all new frames. 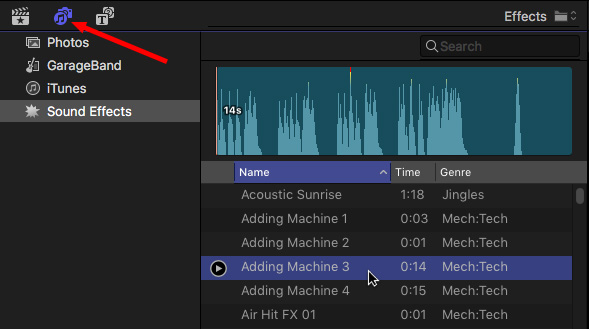 NOTE: All the “Content Browsers” are now located in the top left corner: 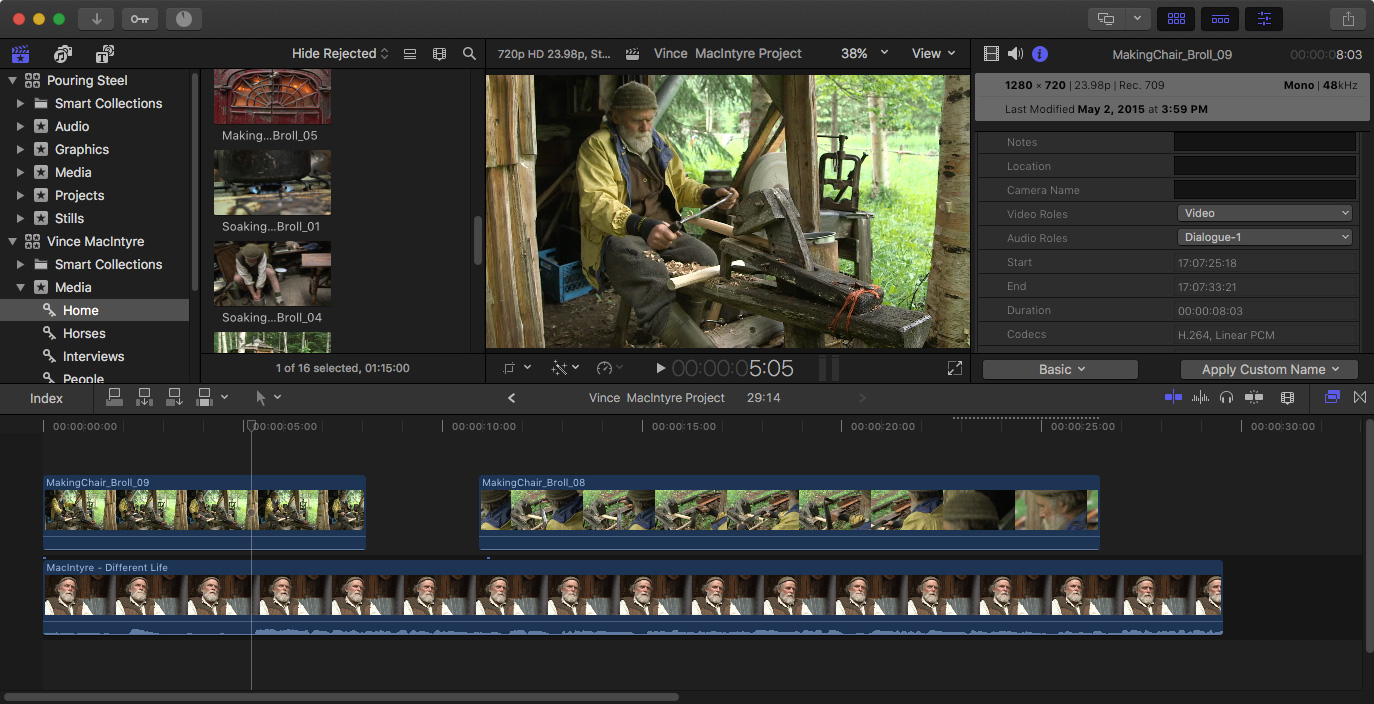 You can get back to the default workspace (window layout) with a single keyboard shortcut: Cmd + 0. The Effects and Transitions Browsers are located in the middle bar, immediately below the Inspector.

And the render bar has transitioned from orange to gray dots.

THINGS I WISH WERE THERE

Every update leaves you amazed with what’s there and, like Christmas, always wanting “just one more present.” There are three things that I wish Apple had included.

Transferring logged media from one system to another via XML makes collaboration between editors easier, but Final Cut still limits us to only one editor in a Library at a time, even if one editor could log in as read-only.

There still is no internal support for closed captioning or loudness metering – both of which are now required in many countries. (Apple would respond saying that both these features are supported by third-parties, which is true but I don’t think this is a sufficient answer.)

I’m reserving judgement on Roles. They have been significantly enhanced and I don’t understand them well enough yet. My hope is that they allow us to mix audio in Final Cut much more effectively than we’ve been able to do in the past, because the audio filters in Final Cut are just outstanding; there just hasn’t been a way to use them properly.

The new update is a big deal. There is a lot here with a lot of new features and capability to wrap our brains around.

However, my usual caution holds: Don’t upgrade in the middle of a project. All Libraries will need to upgrade to the new version, which means they can no longer be opened in FCP X 10.2 or earlier. Fortunately, the upgrade process is fast and painless, unlike the conversion from 10.0 to 10.1.

I’m excited about this new version of Final Cut. So much so that I’ve created all new training to show you how it works.

141 new movies – more than 12 hours of training – covering Final Cut Workflow and Editing. It will release the first week of November and you can order it today for a pre-release price of $49. (If you are a Video Training Library subscriber, you can view the initial 35 movies in my Library today. This is a great reason to to become a member.)

This will be fun.