Nailing Down the Anchor Point in Final Cut Pro

[ This article was first published in the November, 2010, issue of
Larry’s Final Cut Pro Newsletter. Click here to subscribe. ]

It’s hidden in plain sight, near the top of the Motion tab in Final Cut Pro: Anchor Point. But, what does it do? 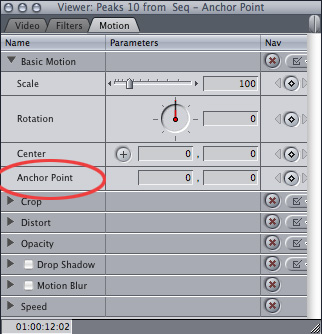 Before we jump into this, we need an essential bit of background. By default, Final Cut calculates all its effects, moves, and positioning relative to the dead center of the Canvas or Viewer. This is illustrated by the Center parameter (above) consisting of two boxes, each containing “0”.

NOTE: Photoshop puts its 0,0 point in the top left corner of an image. FCP uses dead center. It always needs to be somewhere, but it isn’t necessarily the same between applications. 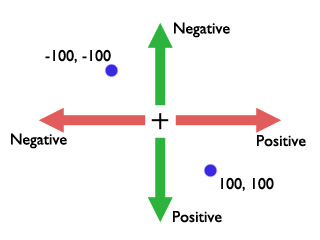 NOTE: Because the zero point is in the center, you can place two objects equally on either side of the zero point by simply changing the sign of a number. This makes it very easy to create symmetrical layouts.

THROWING DOWN AN ANCHOR

What the Anchor Point setting allows us to do is to change where Final Cut places this zero point for two other Motion tab parameters: Scale and Rotation. 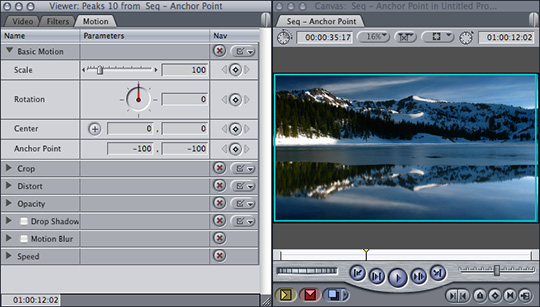 For example, setting the Anchor Point to -100, -100 doesn’t change how the image is displayed. That’s because the Anchor Point works in tandem with two other settings: Center and Rotation. (Image courtesy of Pond5.com.) 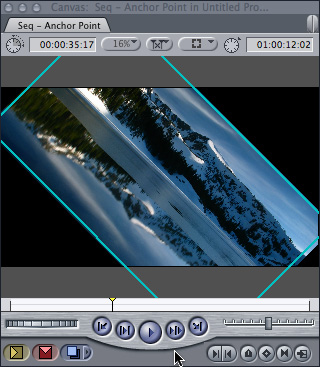 Here’s an example. Both the Center and Anchor Points are set to 0,0. I rotated the image 45º. As you would expect, it rotates around the center of the image. 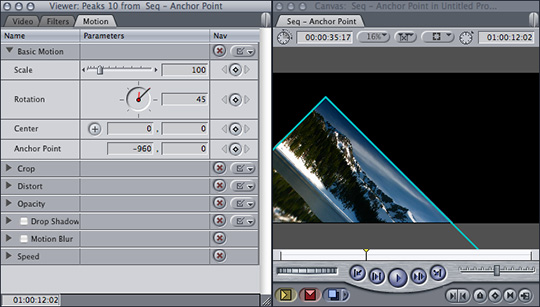 Now, I’ve moved the anchor point to -960,0 (this is a 1920 x 1080 HD clip), and see that the image now rotates on its left edge. The anchor point determines the point around which rotation occurs. 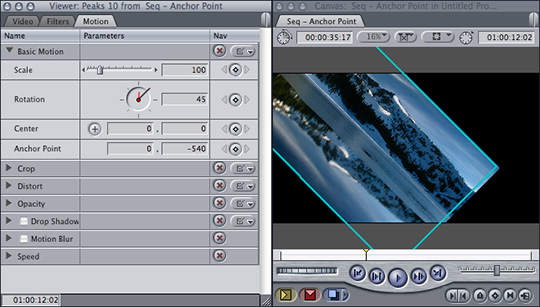 Here, I’ve changed the anchor point to 0,-540 and the image rotates on its top edge. 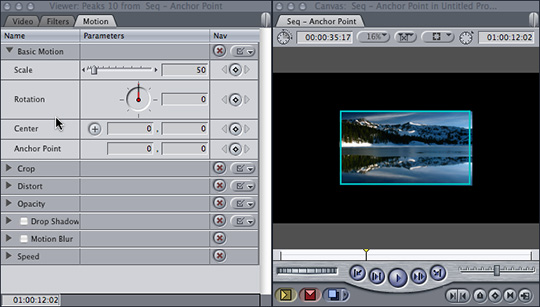 Here, I’ve scaled an image to 50%. As you would expect, it scales from the center of the image. 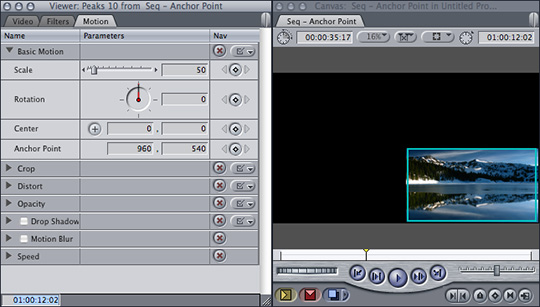 Changing the anchor point is a great way to simplify animating zooms, because you can put the anchor point on the spot you want to zoom into, or from, without having to keyframe the Center parameter during the zoom.

Except, how do you move the anchor point? Entering the right numbers into the Anchor Point setting can be overwhelming for the numerically challenged.

Is there no option? Can no one come to our rescue? Where’s a superhero when we need one??

Fortunately, we have one. Masquerading as a mild-mannered icon that absolutely nobody understands, is the Distort tool. This tool has the power to move Anchor Points. Wow.

Here’s how it works.

Select your clip in the Timeline.

From the top-right pop-up menu, change the setting to Image+Wireframe. The white X highlights the selected clip. (Those with REALLY good eyesight will notice a small number just above the center of the X. This is the number of the track the selected clip is located on.) 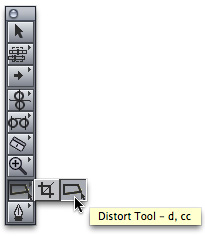 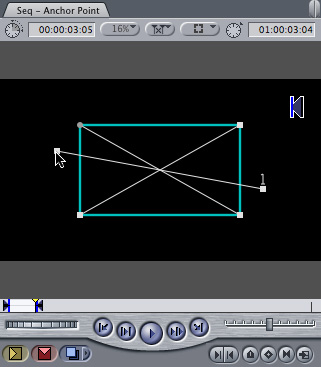 Simple – and very fast. And who knew the Distort tool had such power lurking under the surface?

Webinar Note: Have you ever wondered if you knew as much as you should about the Motion tab in Final Cut? Well, here’s your chance to learn more. I’ve created a webinar titled: Secrets of the Motion Tab: Making Things Move in Final Cut Pro. This one-hour tutorial walks you through everything you need to know to make the Motion tab create magic for you.