[UPDATES: Nov. 2, 2020. Adobe removed XML import from After Effects in the 17.0.5 update. The new recommendation is to import an XML file into Premiere Pro, then save the project. Next, either open the PPRo Project in After Effects or Dynamic Link it to After Effects. Jan. 10, 2021, with a new export screen shot from FCP.]

Most of the time, when you start a project in Final Cut Pro, you’ll want to finish the edit in Final Cut. However, there may be reasons that you need to move a project from FCP to Premiere in the middle of an edit; for example, you need to change editors and the new editor is more comfortable in Premiere.

You CAN move projects between apps and this article explains how.

FCP and Premiere use two different versions of XML (similar to English and French). So, in order for one app to read the XML of the other, it needs to be translated. This requires a utility called: “XtoCC.”

This translation process isn’t really difficult. A more fundamental problem is that the underlying software architecture between FCP and Premiere are very, very different and not everything in your edit will successfully transfer. You need to understand these differences in order to determine if and when is the best time to move projects between software.

This process applies to any Final Cut Pro X project that you want to send to:

The best time to transfer projects is during the rough-cut process, before you start adding transitions, titles, color grading or effects.

Moving rough-cuts between software will almost always be successful. However, for projects you are moving between applications, media must be store OUTSIDE the Library.

In order to transfer between FCP and other applications, you’ll need a utility called: “XtoCC.” Developed by Intelligent Assistance, it is available here in the Mac App Store. The reason this utility is necessary is that FCP and Premiere speak two different versions of XML; this utility converts between them.

Because the effects engines between FCP and other applications are so different, anything that involves an effect won’t transfer. This is why I recommend translating projects in the rough-cut stage, before effects are applied. Here’s a more detailed list:

NOTE: Premiere can import XML containing multiple sequences, nested sequences, event clips etc. Basically anything that’s in a Library or Event. But After Effects and Audition only accept XML with a single sequence and no nested sequences (which means no Compound Clips in your Project). 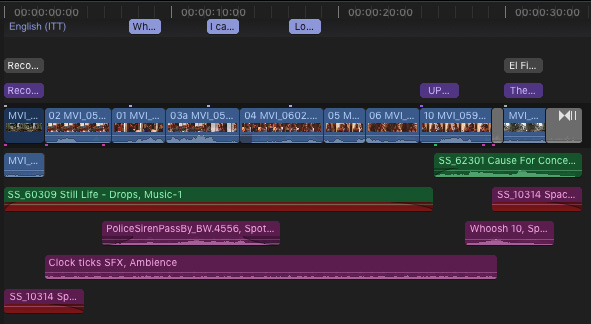 Here’s a typical projects in FCP; though short, this can easily illustrate the transfer process. It contains video and audio clips, transitions, titles and captions.

To move this project from FCP, you need to create an XML (eXtensible Markup Language) file. This contains pointers to all clips, but not the actual media, as well as settings for just about everything in the project file. 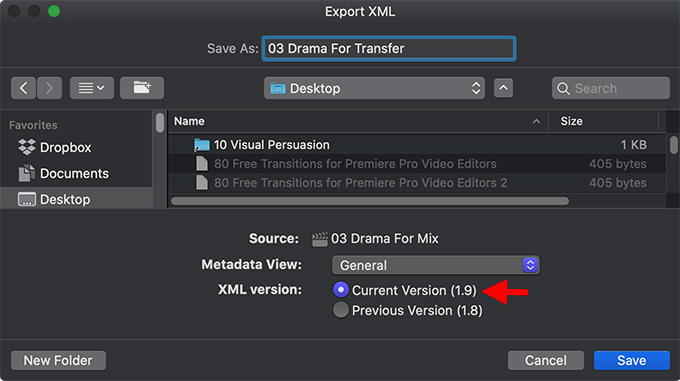 Select the project, then choose File > Export XML. In the resulting dialog, give the XML file a name and storage location. Then, click OK.

NOTE: Be sure to always pick the latest version of XML (Version 1.9 in this screen shot).

In just a few seconds, an XML file is created. XML is a language similar to HTML that you see on many web pages, that explains how the project was created, but doesn’t contain any media. It just contains all the different settings applied to each clip.

NOTE: For long-term archiving, I strongly recommend you save an XML version of every project you want to save. For example, we can convert FCP 7 XML projects easily today, but can’t convert a single FCP 7 project. XML is a long-term archiving format.

NOTE: XML files are just text files. You can open them with TextEdit and see what’s inside; for example the screen shot above is from my project. The good news is that you don’t need to understand how to read an XML file in order to use it.

At this point, you can quit FCP. You no longer need it.

Here’s where the magic happens. Drag the XML file on top of the XtoCC application – either in the Applications folder or the Dock. This opens the application and starts the XML conversion process. (Sigh… you can also simply open the app, then select the XML file from the File Picker window, but that is a whole lot less fun.) 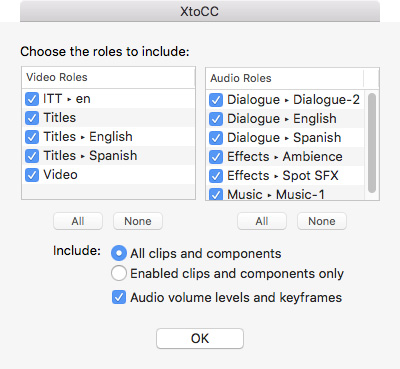 After a few seconds, the translation process is complete. XtoCC then asks which roles you want to transfer. At this point, you have a lot of choices:

In this case, I want to move everything, so I’ll leave all boxes checked and click OK. 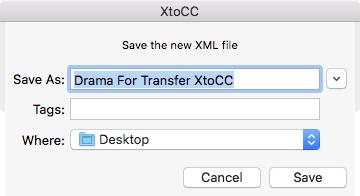 XtoCC displays a dialog asking what I want to name the converted file and where I want to store it.

NOTE: When working with XML files, I generally leave them on the desktop to make them easy to find. I’ll move them into a more permanent location after all the translation is done. This is a personal habit, you can store these wherever you want.

At this point, you can close XtoCC. You are done with it.

The final step is both fast and easy. Open Premiere.

From the Welcome screen choose File > Open and open the XML file directly. You don’t need to create a new project or open an existing one.

Premiere reads the XML file, imports all the media and builds a new sequence in the Premiere timeline based on the original FCP project.