These are recurring questions in my email. So, in this tutorial, I want to show you different ways to measure the performance of your computer system without spending any money.

Many editors focus on the capacity of their storage. This is important, of course, but as frame sizes get bigger and we shift into HDR media, capacity is no longer the limiting factor. Bandwidth is.

With Disk Speed Test, click the Gear icon to select the storage system you want to test, then click Start.

This test loops every ten seconds or so, first measuring write speed, then read speed. After each loop, it displays check boxes for media formats your storage bandwidth is able to support. I’ve found that letting this run for about 30 seconds is enough to get accurate results. 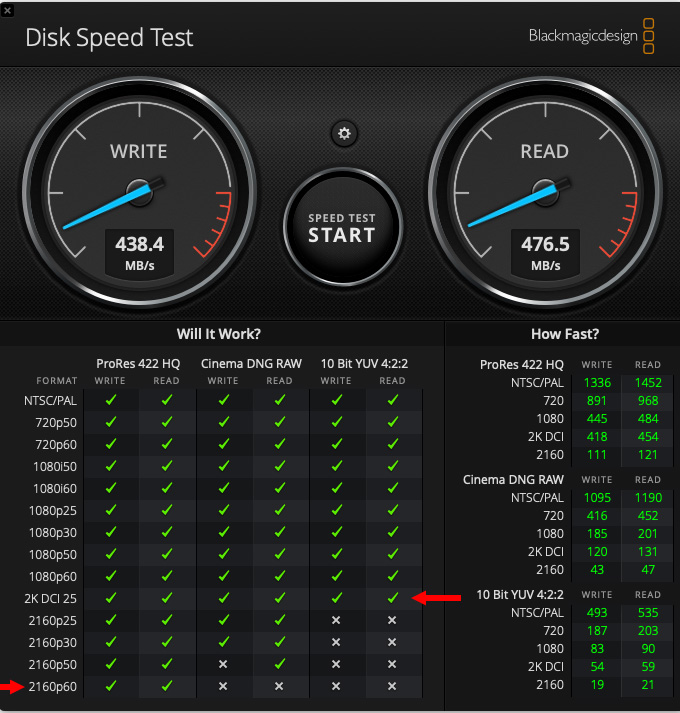 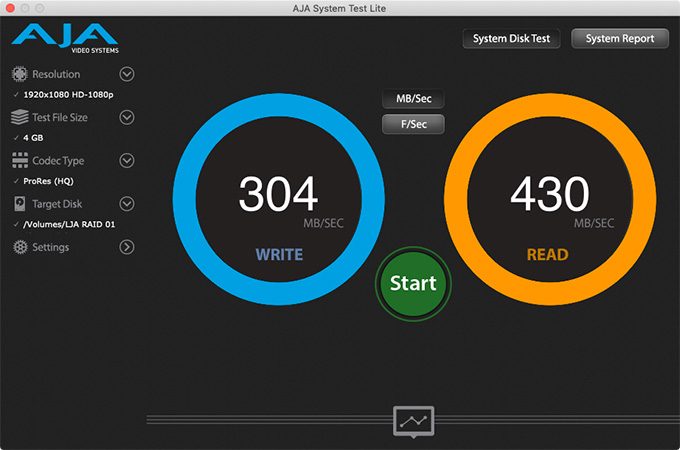 After about 20 seconds, the utility illustrates read and write speeds. Don’t worry if the two tests don’t match; numbers plus or minus 10% of each other are fine. The two utilities use different ways to measure bandwidth. 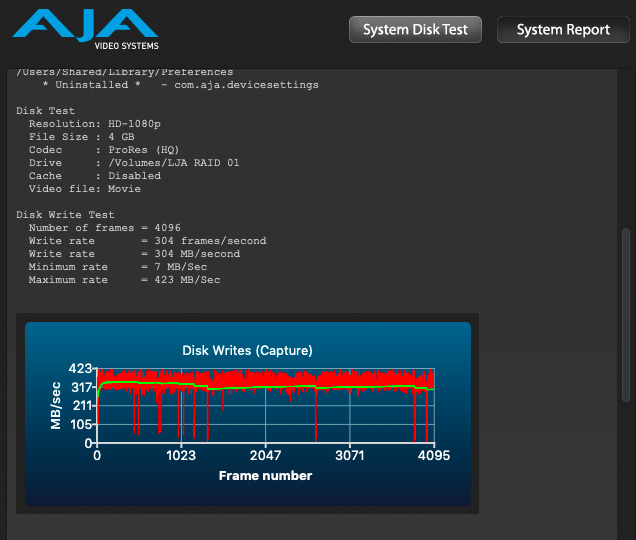 An interesting feature of the AJA System Test Lite is clicking System Report. In addition to providing a lot of technical detail, it shows the slowest and fastest reads and writes during the test.

Cinebench, from Maxon, is a utility that tests the performance of your CPU for rendering, then ranks it against other systems. 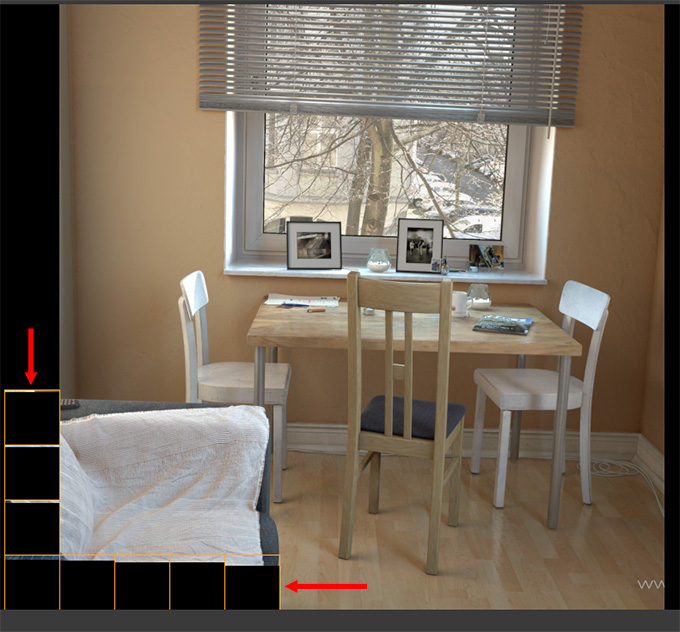 Cinebench then renders an image, using your CPU and the graphics engine of Cinema 4D. This isn’t a photo, its a 3D model. Each orange square represents a core on your CPU. I have a four-core, eight-thread system, so there are eight squares. Your system may look different. 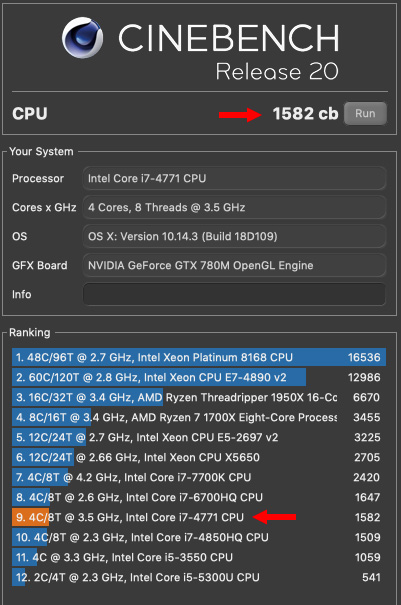 When the test is done, the results are displayed on the left, and you can easily compare yours to other systems. Here, my score is 1582; this is an older computer and pales when compared to newer hardware.

Geekbench is a widely quoted, extensively used system tester. A trial version is free. Purchase price is $9.99 (US) for a Mac-only single-user license. It measures:

Each test takes about two minutes to run.

Here are the results of my CPU benchmark,  plus LOTS of statistics on how the CPU did under a wide variety of tests. This is an older system that I use to write this newsletter. Your speeds will, undoubtedly be faster.

The latest version adds a “Compute” benchmark that tests the GPU. However, in order to test the Metal API, which yields the best results, you need to purchase Geekbench. This is worth doing, as Geekbench is solid software. But, purchase is not required to make the most of your system; especially if you only use one computer all the time.

For me, Geekbench is most useful when comparing multiple systems, as opposed to tracking a single system.

So far, all these tests indicate potential performance. What happens when you are using an application? That’s where Activity Monitor comes in. (You’ll find it in Applications > Utilities.)

When you open the application, there are five buttons across the top you can use to measure system performance:

I use all of these regularly except Energy.

This section indicates how hard your CPUs are working. 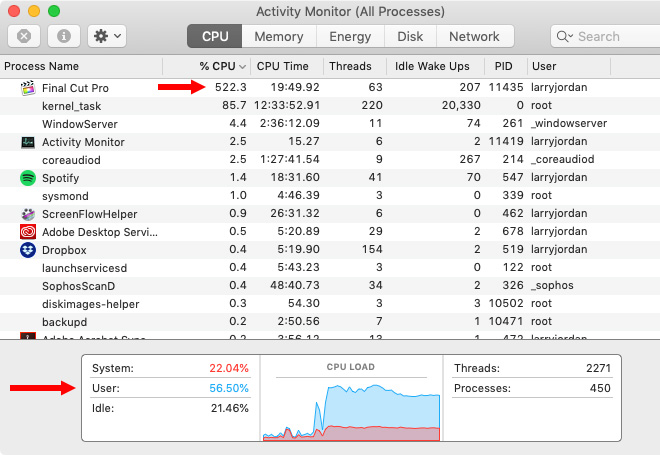 Here, for instance, I’m running a project in Final Cut Pro. (This process is the same for Premiere, or any Mac app.)

CPU effort varies based upon what other software is running, the NLE you are using, the tasks being performed and so on. In other words, it keeps changing. Not to worry.

You’ll notice that that maximum values exceed 100%. That’s because the system assigns 100% to each thread on your system. So, a four-core, eight-thread CPU would have 800% total CPU available.

You will NEVER see this. Your CPUs are doing a lot of behind-the-scenes work which prevents them from devoting full attention to any single app. This is normal and, again, not to worry about.

NOTE: Red indicates tasks that are controlled by the operating system. Green are tasks controlled by you. As you can see, the OS requires a lot of your CPUs on an on-going basis.

Choose Window > CPU Usage to see how hard each CPU and core is running on a second-by-second basis. 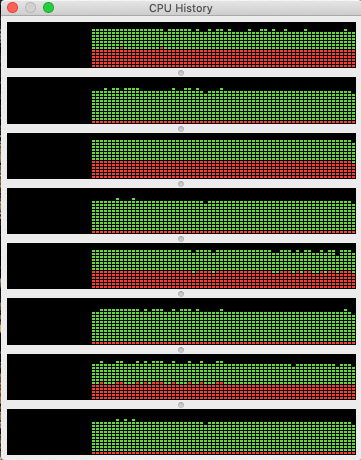 Choose Window > CPU History to see how hard each CPU is working over time.

SUMMARY: Faster CPUs will get the same amount of work done more quickly. However, if your CPUs are not really busy, that indicates that delays are caused somewhere else.

Activity Monitor does not provide numerical tracking of the GPU; at least not on the systems I’ve worked with. However, you can get a sense of how the GPU is doing by selecting Window > GPU History. 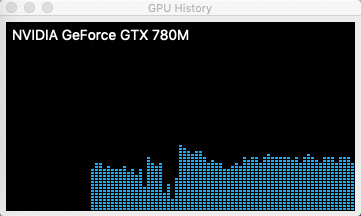 SUMMARY: Faster GPUs will get work done more quickly. But the quality of all GPU output is the same. Different effects require varying performance levels from both CPU and GPU systems.

This is the setting I use the most. This measures how much data I am playing back (Read) and recording (Write) each second. The numbers at the top are not as helpful as the graph at the bottom.

Here, red indicates the amount of data being recorded by the storage system. In this case 54 MB/second. This is typical of render and export operations. (In this case, the data is playing from a server, which does not display in the Disk tab.)

Due to the calculations needed to create render, or export, files you will never max this out. Again, that’s normal.

Here, blue indicates the amount of data playing from storage. This is typical of editing, where you are playing back lots of clips, but not saving any media to disk. Write speeds are also high because rendering is going on in the background.)

By the way, see how little the CPUs are working during editing? Clip review and editing, alone, are not particularly taxing to any CPU manufactured in the last four years or so. Effects, though, are a different story.

SUMMARY: Measuring the data transfer speed to your storage helps you determine how fast your storage needs to be. Ideally, all storage should be connected via Thunderbolt for best performance.

This measures the speed of data transfer to or from the network. While this could measure download speed from the web, it is more useful measuring data transfer speed to a server stored on a local network.

Again, like disk storage, blue indicates data playing from a server, while red indicates data being stored on the server. In this example, I’m playing 93 MB/second from the server. Since this is gigabit Ethernet, with a maximum transfer rate around 110 MB/second, I’m getting close to maxing out my network connection.

SUMMARY: Gigabit Ethernet is fine for virtually all HD material, but too slow for serious 4K or HDR work. Upgrading network cabling, data switches and servers to 10-Gigabit Ethernet or Fibre Channel is required for shared storage at larger frame rates.

Every system is different. Results vary by frame size, frame rate, codec and what work the editing system is doing. There is no single “right” answer.

But, now that you know how the tools work, you can start to track your own system to see where the bottlenecks are and how to unblock them.