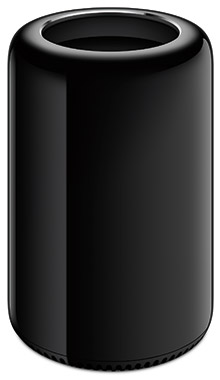 There are a variety of excellent performance reviews of the new Mac Pro on a variety of sites, so I decided to compare the Mac Pro with an iMac from a different perspective: video compression. What I learned surprised me, as you’ll see in this article.

The purpose of this test was to judge compression speed, not image quality, in an effort to compare these two systems; though compressed image quality seemed comparable between the two systems.

When running Apple Compressor 4.1 as a bench-mark, the new Mac Pro is faster for some compression tasks and significantly slower for others when compared to a recent model iMac. If video compression is your primary use for a new computer, you may be better off buying a top of the line iMac.

A NOTE  ON HARDWARE ACCELERATION

Hardware acceleration is a two-edged sword. It is MUCH faster than software encoding. However, it only yields image quality and file sizes equal to single-pass encoding. This will often be fine for movies that don’t contain a lot of movement, such as screen captures; or movies where getting it done fast is better than image quality, such as news or digital dailies. However, hardware compression is generally not the best choice for movies with lots of movement between frames or where you need the highest image quality with the smallest file size. 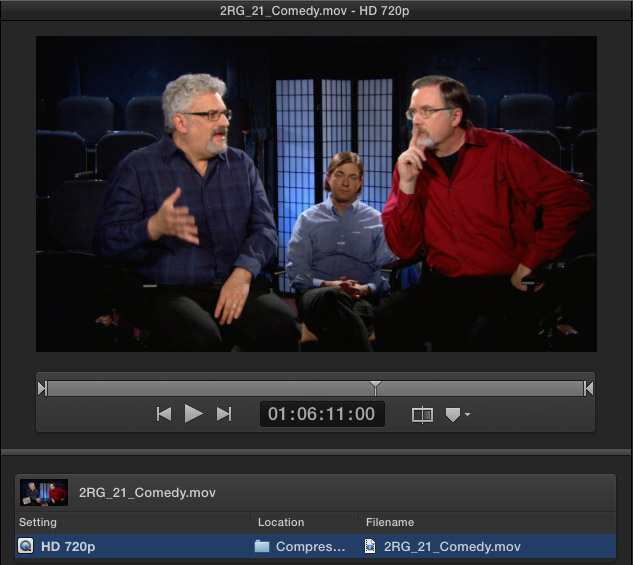 I ran a series of 21 compression tasks on both a current model iMac and new Mac Pro, noting how long the compression took and the difference in file sizes created. I used four test files:

All videos were 720p ProRes 422 or ProRes 4444 files with uncompressed audio. The audio podcast was in uncompressed WAV format.

All settings matched between the two computers. Both Compressor and Mavericks were running the latest version. The Mac Pro had its latest firmware update installed. 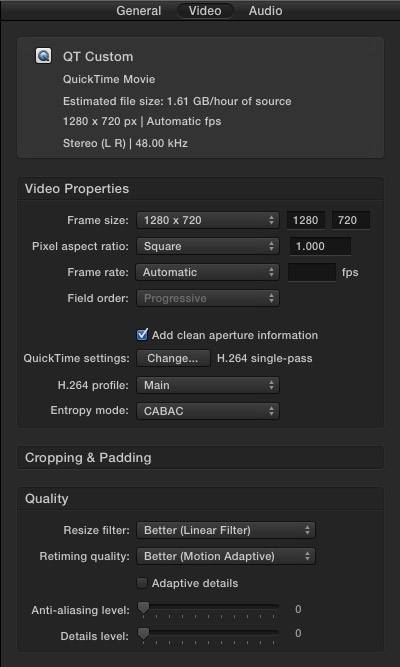 Here are the settings I used for the custom QuickTime setting: H.264 codec, 2000 kbps data rate, frame reordering on, keyframes every 90 frames. 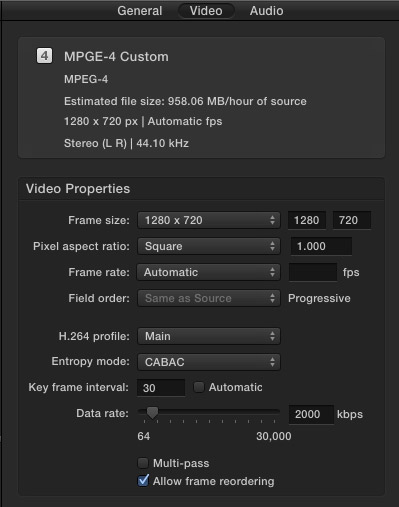 Here are the settings I used for the custom MPEG-4 setting.

Compression speeds varied depending upon the length and complexity of the source files, though compressed file sizes were essentially the same between the two computers (which I would expect). All files were stored and saved to the desktop.

NOTE: As measured by the Blackmagic Design Speed Test (BMD), the Mac Pro was roughly 5 times faster at reading and writing to the desktop than the iMac. This speed differential does not seem to be significant in compression. 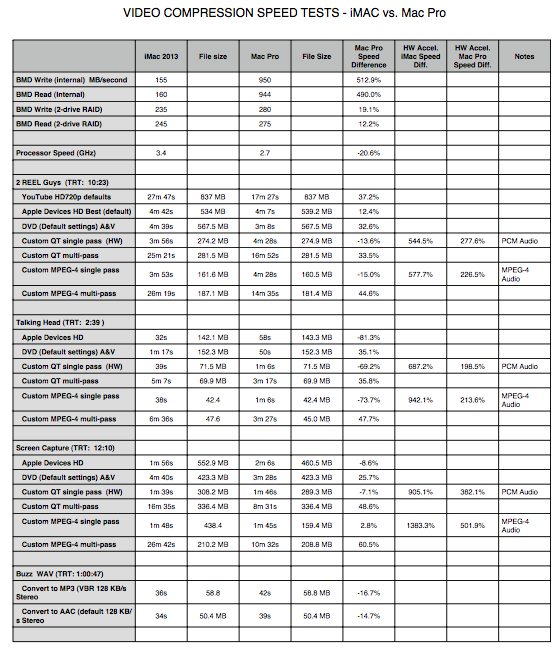 Click the table to see a PDF of all my results.

NOTES ON THE TEST 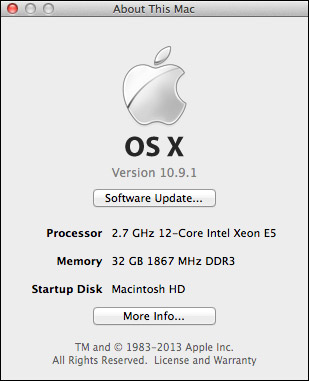 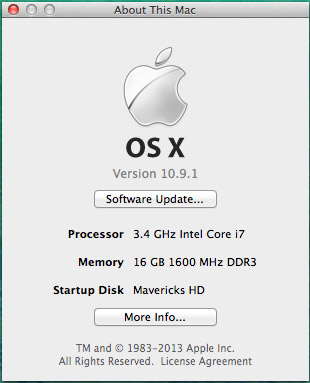 I am working with a new Mac Pro, which is on loan from Apple. (You can read my first review of it here.)

I used the same compression settings on both computers. Timings were measured by Compressor and displayed in the Completed tab. One job was fully complete before the next job started. Two jobs never ran at the same time.

Here’s an article that explains the difference between single-instance and multiple-instance mode and when to use which.

Audio file sample rates were converted from 48 kHz to 44.1 kHz.

The same compression settings were used between the three video tests. The only difference was in the source media.

The only difference I made between the single-pass and multi-pass compression settings was checking, or unchecking, the multi-pass check box.

I was totally surprised by these findings. Until we start to see applications optimized to take advantage of the power of the Mac Pro, if video compression is your key task, a high-end iMac is your best choice.