Larry’s Thoughts on the New MacPro 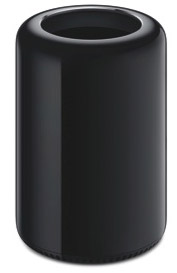 First, let’s be clear: The new MacPro is not yet shipping. So, like a group of blind folks describing an elephant, we are getting a lot of different opinions on what this new animal is.

Second, the instant Apple revealed it at the WWDC last spring, I wanted one.

Third, buying new hardware is stressful and expensive; especially when it comes to hardware essential to our business.

So, the question I want to answer today is: Since I need to save my pennies to buy this, where do I get the best bang for the buck? And my answers are the same if I were working with Final Cut Pro X, Adobe Premiere CC, or audio editing in ProTools or Audition.

If money means nothing to you, then buy the system with all the bells and whistles. Then, sit back and smirk while the rest of us hate you. For most of us, buying hardware is a trade-off between what we want and what we can afford. In other words, if finding the balance between the best performance at the best price is important to you, this article is for you.

Based on what we know, there are five areas we can spend money on with this unit:

So, given these choices, where should we spend our money?

WHERE’S THE BEST BANG FOR THE BUCK?

Surprisingly, it isn’t the CPU. Any CPU today can easily edit video – even high-resolution video. If you are editing single stream video, even high-resolution, the four-core system will be more than adequate. More cores will be helpful with multicam editing.

Because rendering and exporting is off-loaded to the GPU, a screamingly-fast CPU is not as important as it was in years past. Again, more cores and faster CPU speed is nice, but no longer essential. There are better places to put your money.

Specifically, the best place to spend your money is on the GPU. Get the fastest one you can afford, with as much VRAM as possible. Whether you are editing with Premiere Pro CC or Final Cut Pro X, both max out GPU performance.

RAM is user-upgradeable. This means that you can buy less than you might ultimately need, then upgrade as RAM prices come down and third-party vendors provide reliable upgrades. For me, I’d start with a minimum of 8 GB, then add RAM via third-parties.

NOTE: I don’t expect a lot of RAM options to be available at launch. It will probably take suppliers like Kingston – www.kingston.com – or Crucial – www.crucial.com – a while to ramp up to meet demand.

SECOND NOTE: I spoke with the folks at Kingston earlier today, who told me that, according to the specs of the MacPro: “It can take [RAM] up to 1866MHz in speed, and up to 16GB modules in each of the four slots.  We will have memory for this.  [Since] the product will be released in December we don’t have an ETA on our memory yet.”

The Mac Pro supports up to 1 TB of SSD (Solid State Drive) storage. First, you don’t need that much, and second, I’m not convinced SSDs are the way to go for media. Instead, an SSD drive is ideally suited for the boot drive. I have an SSD-enhanced iMac (a Fusion drive) that goes from powered off to fully operational in nine seconds. I expect the MacPro to be even faster.

In fact, everything on my boot drive – EVERYTHING – is only 220 GB. (And that includes a desktop folder that holds more files than I will ever admit to storing in public.) A boot drive of 250 GB is more than adequate for the OS and applications.

NOTE: There’s an axiom in the storage business that the faster a unit transfers data, the less data it can hold and the more it costs.

Rather than buy a large, internal SSD drive, I plan to spend a small fortune on a high-speed, fully-loaded Thunderbolt RAID 5 with a minimum of 8 drives. THAT provides all the storage and performance I need — even for editing 2K multicam clips containing up to 30 angles!

Think about it. Shoots are creating more and more media. My recent 13-episode 2 Reel Guys shoot geneerated 1.5 TB of data. There is no reason this should be stored on a boot drive. External media is plenty fast, holds a ton of media and can be easily transported from one place to another.

Spend your money on external storage, not the internal SSD drive.

A NOTE ON SPEED

Simply connecting a single hard drive to a computer via Thunderbolt does NOT mean you are getting Thunderbolt speeds. Just the opposite. As a rough measure, a spinning hard disk that is not enhanced with a small internal SSD booster, can read and write data about 120 MB/second, whether it is connected by USB 3 or Thunderbolt. (FireWire, by contrast, slows the drive down to about 80 MB/second.)

This means that in order to get the speed you expect from a Thunderbolt connection, you need to keep combining drives in a single unit (which is what a RAID is). To fully saturate (fill) a Thunderbolt 2 pipe, you would need a RAID containing about 20 drives!

A THOUGHT ON SLOTS

There’s been a lot of complaining about the lack of PCIe slots on the MacPro. I’m sympathetic, but, frankly, I’m not bothered by this.

Every significant vendor who supplies hardware to the Mac community is working on Thunderbolt devices. AJA, ATTO, Blackmagic Design, Matrox, Sonnet — all of them. Why? Because Thunderbolt devices are easier to install, configure, and, most importantly, support.

Plus, the new hardware data bus inside the Mac Pro is faster than the PCIe bus we’ve been using in current MacPros.

NOTE: For those with significant investments in PCIe cards, Sonnet has announced an expansion chassis that holds the cards and converts the interface into Thunderbolt 2.

For me, the simplicity of plugging in what I need and getting on with my work FAR outweighs the slight performance increase that might be obtained by custom-building a system. (Then, again, I’ve never been fascinated by doing my own home or car repairs. Others, though, find it fascinating. Each to his own.) I prefer getting work done to wasting time configuring; and Thunderbolt 2 is so blazingly fast, that I don’t expect to ever fully utilize it; even for high-resolution media.

I plan to buy a new Mac Pro the week they ship, though probably not the first day. (As I’ve written before, I prefer to let someone else intercept the first arrows.)

I’ll spend more money on the GPU than the CPU. And I’m already looking for storage for this system. As we get closer, I’ll let you know what I decide to buy and how I configured it.

96 Responses to Larry’s Thoughts on the New MacPro