How Loud Is Loud?

Earl Nottingham got this idea started when he wrote:

I’m sure you’re familiar with the CALM act which sets new standards for how loud television broadcasts can be (especially commercials).

My question: What is the video creator’s responsibility (if any) to maintain specified volume levels in the final audio mix? The ATSC A/85 specifications of the CALM act mention a “new” amplitude reference level standard of –24 LKFS. I’m not sure how that relates to the VU scale.

This seems like something that will impact all video producers.

Larry replies: Actually, Eric, I have no clue; time to do some research. Here’s what I learned.

VU meters, which were used in analog audio, are notoriously inaccurate because of the ballistics in flipping that VU pointer across the dial. They tended to under-report peaks. Which, in an analog environment, is not a big deal – there was a lot of headroom. But, headroom doesn’t exist in digital. Digital meters display peak audio as dBFS (decibels full scale).  We may call them “VU Meters,” but they aren’t.

Complicating this further is that peaks are not a good indication of loudness. As an example, think of listening to a couple whispering – while every so often we hear the loud tick of a clock. The clock is peaking the meter, but the couple is almost indistinguishable.  This would not be a “loud” clip.

In a recent seminar, Tektronix reported that there is roughly a 15 dB range where audio levels are considered “acceptable.” Beyond that, listeners either want to turn levels up, or down.

Dolby is very active in trying to define, measure, and modify audio to create the optimum listening experience. This extends to broadcast where Dolby uses a variety of metadata in its AC3 audio streams in a broadcast network to help assure consistent audio levels. However, that metadata is only an option when listening to Dolby AC3 audio; which excludes any audio that is not encoded to AC3.

The problem is that as video editors, we need to start paying attention to these levels if we are doing the final mix for submission to broadcast. (If your audio will be mixed by a post-house, then this does not apply to you directly.)

Led by broadcast regulators in the EU, there is now increasing regulation on how loud is loud for things like commercials and programs in Europe and the US.

The ITU has created a spec – called ITU-R BS.1770 – that defines how to measure loudness on a consistent basis in keeping with these regulations. This standard creates a new loudness measurement: LKFS. (Soundtrack Pro does not measure to this value. Audition CS6 measures this value after the fact, but requires a plug-in to measure it in real-time during the mix. ProTools, too, requires a plug-in for real-time measurement.)

To see how this plays out in the real world, I contacted Woody Woodhall, CEO at Allied Post, an audio post facility in Los Angeles that does a lot of mixing for broadcast. I asked him how he measures loudness. Here’s Woody’s reply:

That measurement is made with a meter that is quite different than a simple VU meter. The technical [spec it needs to meet] is an LKFS measurement [using] an ITU-R BS.1770-1 algorithm; to read and mix correctly you must use a meter with those specs. Typically the Dolby meter, the LM100, gives their version of that reading. I myself use the Dolby Media Meter which can express this measurement. All TV that I mix conforms to this standard. I mix using three measuring devices to properly hit the network specs – a true peak meter, and RMS meter and a Dolby meter. QC [the quality control engineers at a broadcast outlet] can kick a program not within spec.

Now to further answer the question – if the program material being delivered must meet this spec for QC then the person in charge of creating and delivering must be sure to meet those specs. Be it a re-recording mixer like myself or a video editor who is creating the mix deliverable and splits. 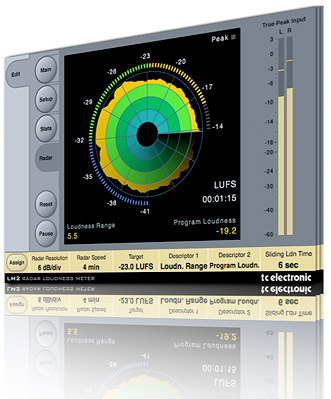 There is a ton more geekery about it all but let’s just keep it simple…. The best software versions are the afore mentioned Dolby Media Meter 2 – MSRP $795 – great tool, provides a second by second log of the LKFS measure (great to send to QC when there is an issue) there is also a much more useful meter by TC Electronic – TR2 or TR6 – which can provide all the needed measures – true peak, RMS and ITU 1770. The Dolby meter can be used “faster than realtime” as an audio suite plug-in in Pro Tools or other DAWs. So you can create a log of the file after the fact. Create the mix and then run the file through the meter and a one-hour show can be measured in minutes. Of course that is just for verification… if you haven’t been measuring as you mix there is no way to tell if you are within spec.

One last gotcha… the spec is typically very tight, for my deliveries (this week!) for my series for Food Network, Fuse TV and truTV all the LKFS must be within 1 db, +/- of -24. Not much wiggle room anymore. -22 or -26 and you are kicked from QC. Gone are the days of “what sounds good is good enough.”

So, Eric, if you need to mix for something more critical than YouTube, now you’ve got your answer.

7 Responses to How Loud Is Loud?